Good performance and clever design, but the EliteDesk 705 G4 isn't perfect and nor is it always the quickest option.

The HP EliteDesk 705 G4 SFF is designed to handle every task required in an office environment while keeping the noise down, offering good upgrade options and serving up dozens of security features.

Is it worth placing a bulk order for your workplace, or should you look elsewhere for your corporate upgrades? Let’s dive in to the HP EliteDesk and find out.

The EliteDesk would be at home in any office. The front panel is made from plastic, but it’s smart, with a slatted top section and a metallic band within which you’ll find the HP logo, power button and front ports. The rest of the exterior is built from black aluminium. 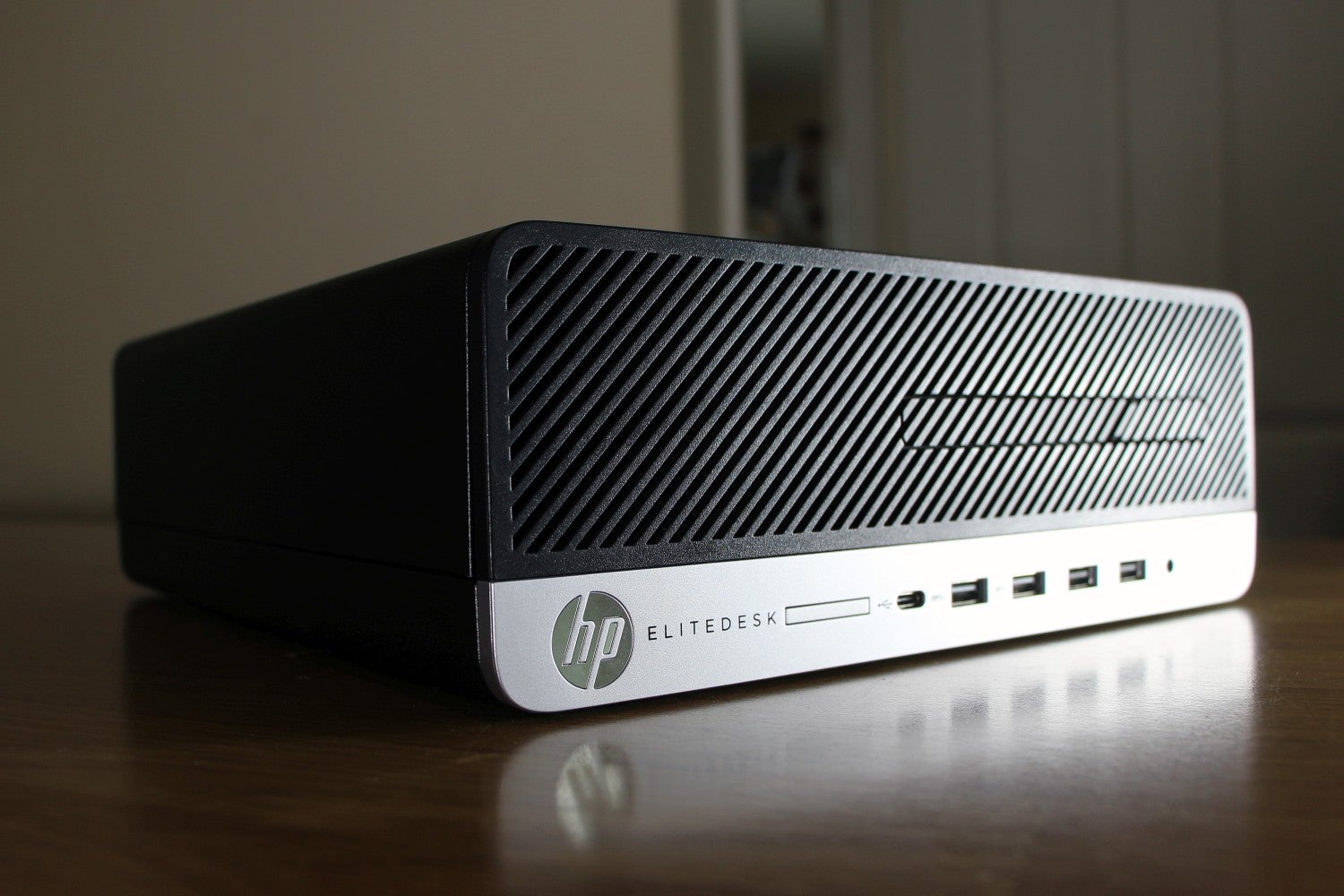 The EliteDesk looks smart, with a metallic front panel and slats that help cool air enter the rig.

At the front the HP EliteDesk 705 serves up two USB 2 ports and two faster USB 3.1 connectors, and there’s a USB 3.1 Type-C port that can be used for charging. There’s also a slimline DVD writer – a rarer but welcome addition on current PCs, especially if you need to rely on older or more obscure software.

It’s a good selection for connecting peripherals, but HP could have done better. The absence of HDMI and DVI will make monitor and projector connectivity trickier, and there’s no USB 3.1 Gen 2 – so you miss out on faster transfer speeds. A card reader is also lacking.

The HP’s lid and side coverings lift away easily. Once removed, it’s possible to access all of the EliteDesk’s internals, which is ideal for upgrading and servicing. 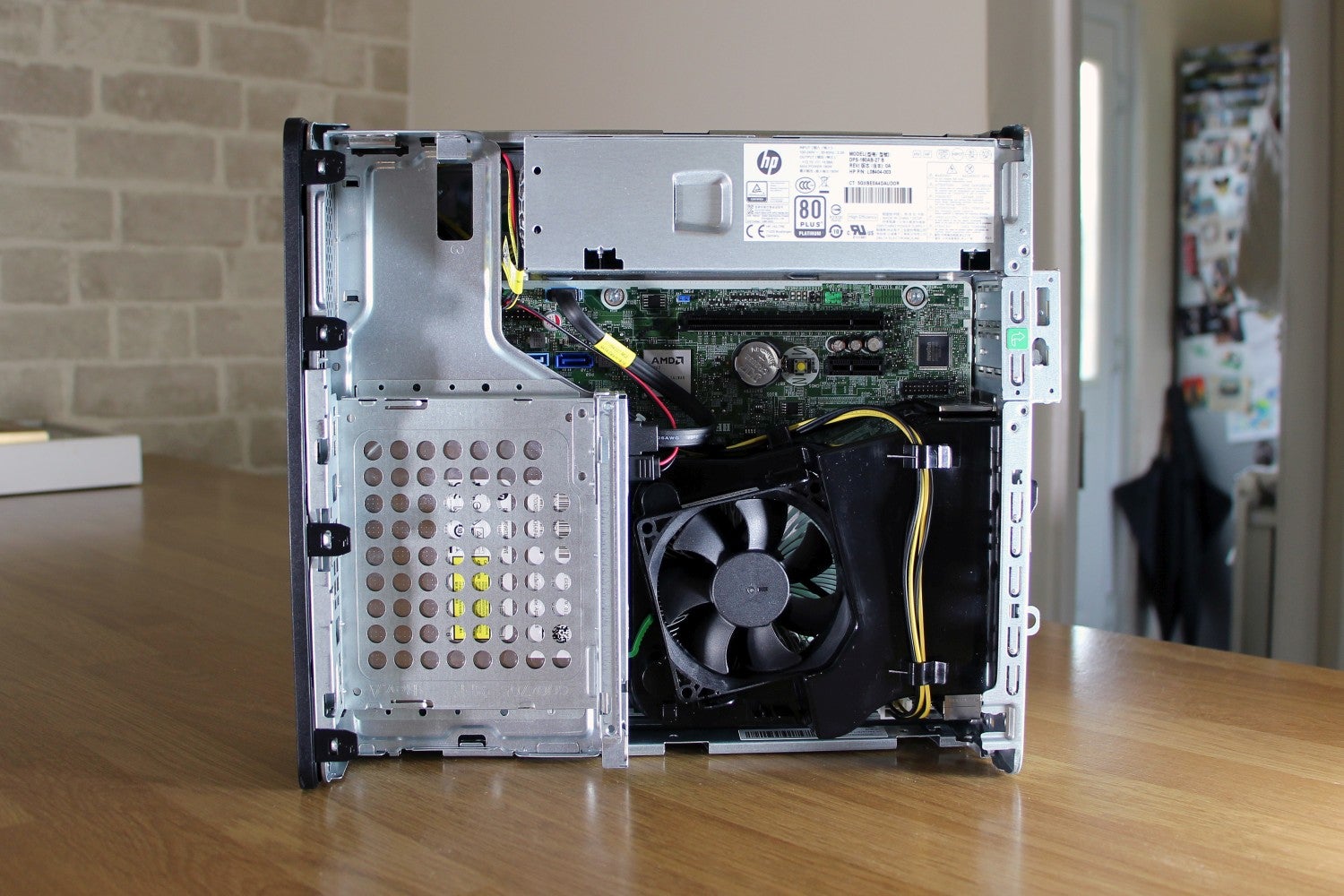 This is a small PC, but clever design means that the components are all relatively easy to access for servicing or upgrades.

The motherboard has single spare PCI-E x16 and x1 slots. The former can be used for adding graphics cards, and the latter is handy for PCI-based SSD and wireless cards. However, be aware that these slots accept only half-height graphics cards, which restricts the HP to modest graphics hardware: on the Nvidia side it will accept low-end GPUs such as the GTX 1050 and some Quadro models, and on AMD you’re looking at a handful of FirePro cards.

There’s an easily accessible 3.5-inch hard disk bay above the optical drive, and these components are installed into a metal cage that covers one-third of the rig. The plastic front panel pops off easily, and green arrows around the case indicate areas where hardware can be opened or removed.

There are three free memory slots beneath the metal storage cage, alongside the M.2 SSD. There’s another M.2 port here, although it’s only large enough to accept wireless cards.

A couple of tabs are used to remove a flimsy, pointless plastic shroud from around the CPU cooler. The cooler itself is a conventional model that attaches with four Philips screws, so it’s easy to remove.

The EliteDesk is smartly designed, with PCI and memory upgrade room, space for a hard disk and components that are accessible. Servicing this machine will be relatively simple. 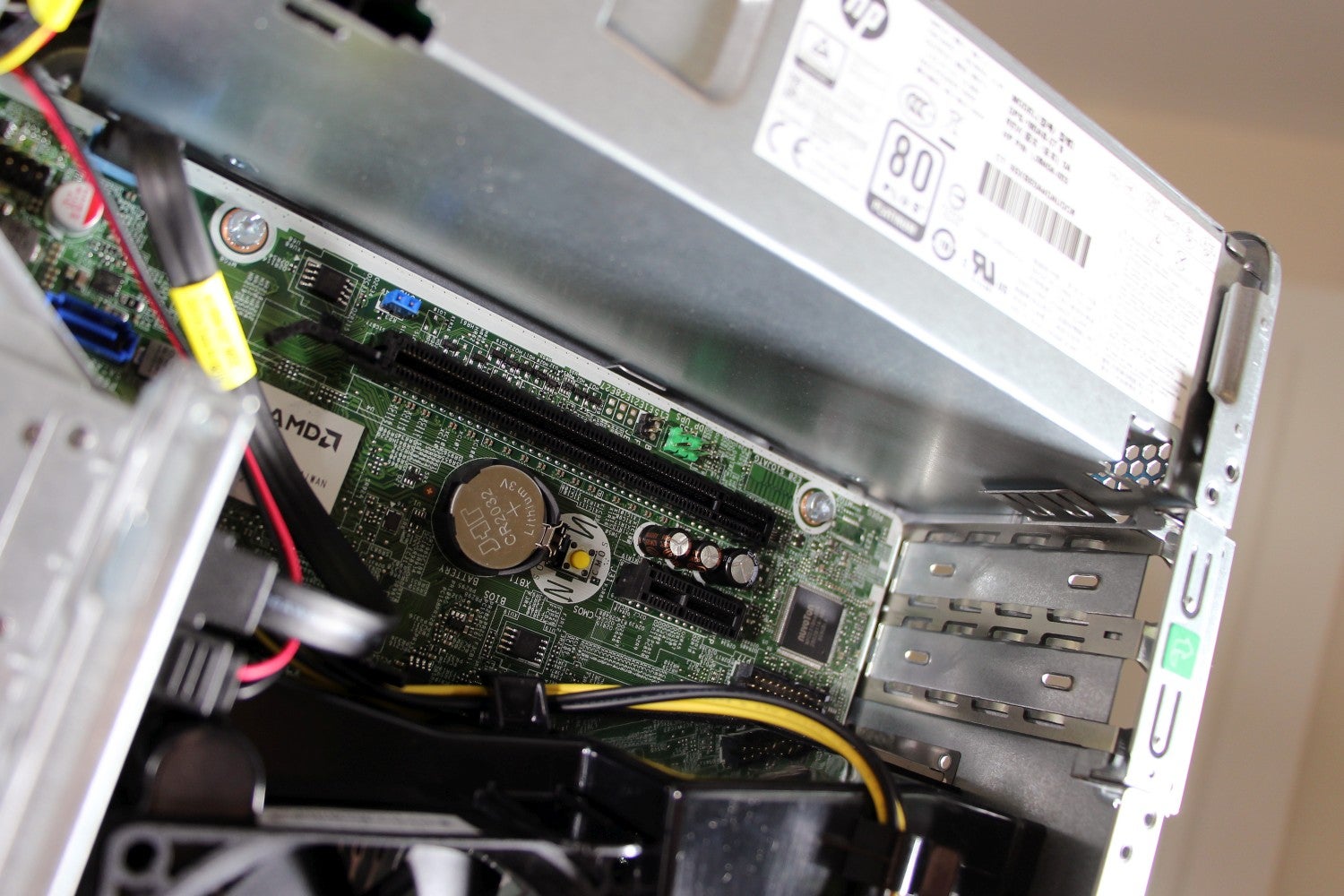 It’s all the more impressive when the EliteDesk’s dimensions are considered. This machine weighs only 4.5kg, and it’s 295mm deep, 270mm wide and 95mm tall, which is small enough to sit discreetly on a desk or in other tight spaces.

The EliteDesk can sit horizontally or vertically, thanks to rubber pads and plastic stands. Build quality is fine – there are a couple of flimsier bits of metal inside, but they won’t cause day-to-day problems. The plastic front and metal top are all sturdy.

The EliteDesk comes with a solid selection of security and software options. HP Sure Start protects the BIOS from attacks, and deployments can be handled by combining the HP Manageability Integration Kit with Microsoft System Center Configuration Manager.

Elsewhere, HP adds tools for managing password, security and credentials when booting and for Windows. As you might expect from, there’s also a TPM 2.0 chip to ensure that sensitive data like this is encrypted on the device.

The HP EliteDesk 705 is protected by a three-year warranty that includes parts, labour and on-site repairs, which is a generous deal.

The model reviewed here is one of three of the HP EliteDesk 704 G4 PCs available. This £778 machine features the Ryzen 5 Pro 2400G CPU – a quad-core chip that can address eight threads and which runs at base and boost clocks of 3.6GHz and 3.9GHz. 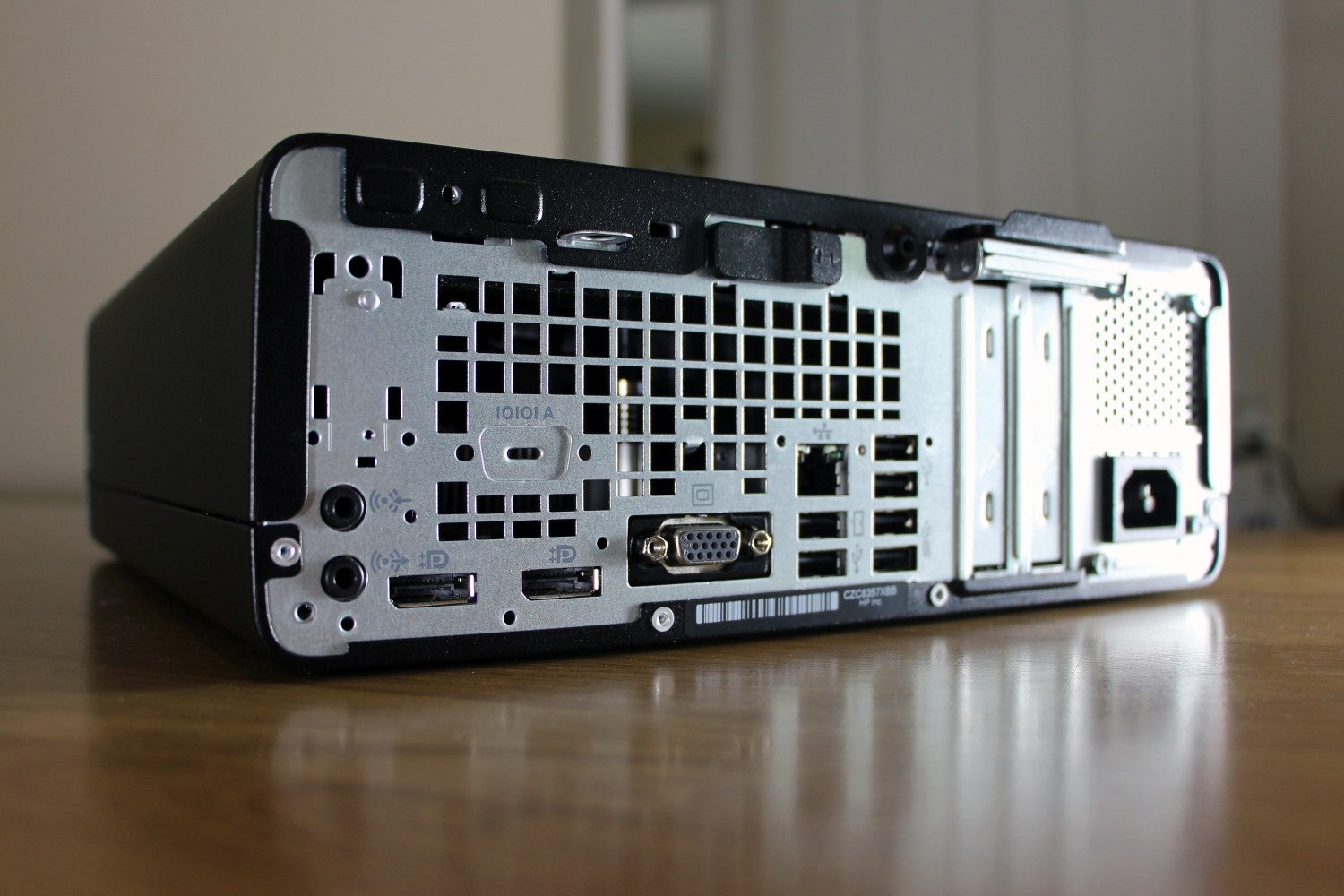 There are plenty of USB ports on the back, but HP hasn’t used the fastest protocol available. There’s no HDMI either.

All three are the same elsewhere, with 8GB of memory and a 256GB SSD.

HP also sells two ProDesk 400 PCs. These systems sport almost the same physical design as the EliteDesk 705, and include Intel CPUs instead of AMD processors. They do have fewer ports than the AMD machines.

You also get 24 months of hardware availability and 18 months of software stability with these chips, alongside a three-year warranty – compared to one-year for consumer parts.

It’s a similar slate of features to Intel vPro, with some – but not all, especially not the GuardMI suite – available on AMD’s consumer chips.

In more conventional areas, the Ryzen 5 Pro 2400G matches the consumer Ryzen 5 2400G. It’s a four-core part with support for eight concurrent threads, and it runs at 3.6GHz with a turbo speed of 3.9GHz. It has a Radeon RX Vega 11 graphics core that uses 11 GPU cores and runs at 1250MHz.

The Ryzen 5 Pro 2400G occupies an interesting position in the market. It’s in the mid-range in AMD’s CPU stack, but it costs only around £115 – so on price it competes with the Intel Core i3-8100, which also costs £115. That part has four cores, no multi-threading, no vPro and no Turbo, with a base clock of 3.6GHz. 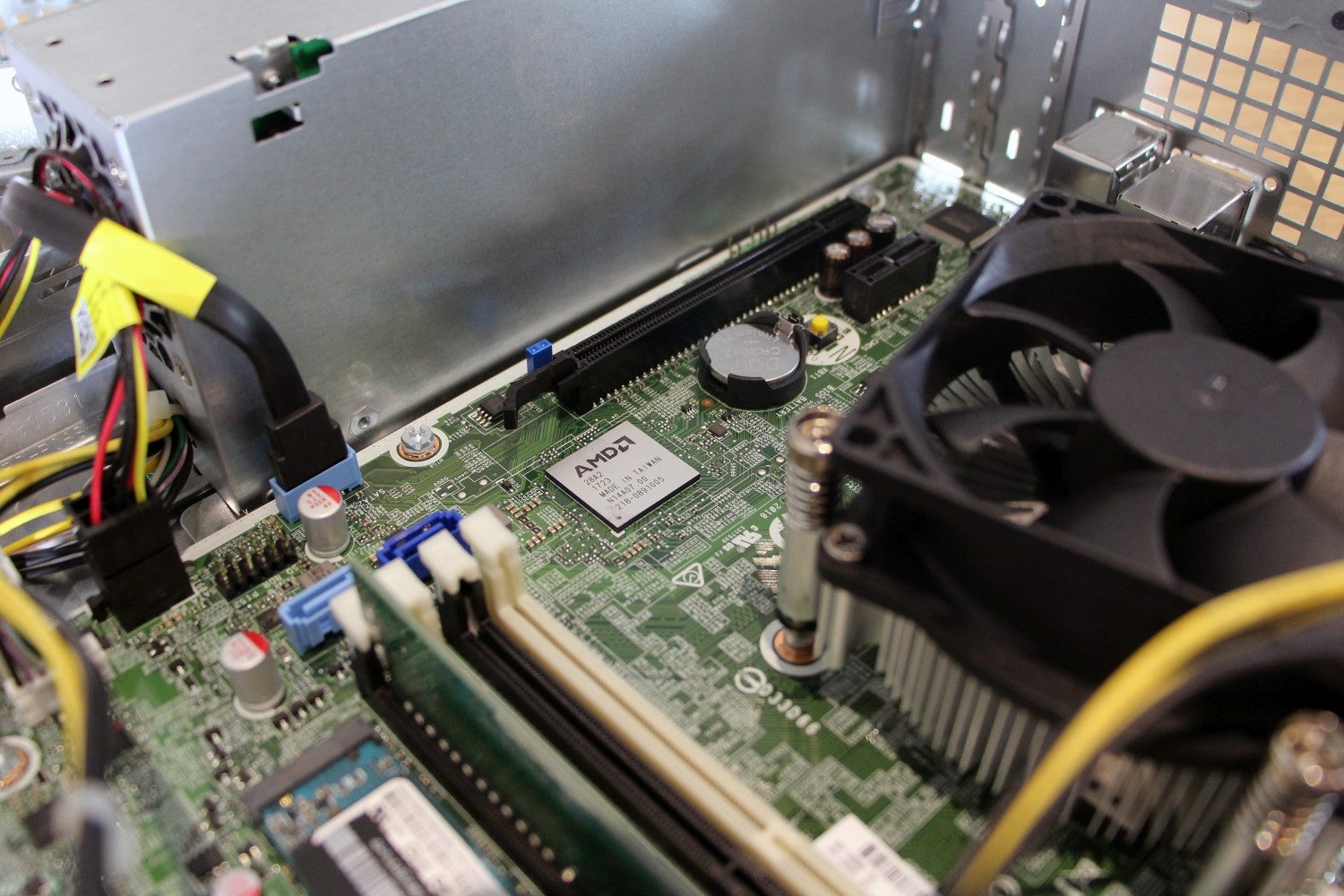 The addition of AMD APUs mean that you get an integrated graphics core with more power than anything Intel can offer.

These scores indicate that you’ll achieve better performance from Intel in tasks where pure CPU performance is prized. And, if you opt for a chip like the Core i5-8500 or the i7-8700, you’ll get scores around 18,000 or 23,000 points.

However, AMD does fight back: the Ryzen 7 Pro 2700 in the pricier EliteDesk scores around 23,000 points in that benchmark.

Cinebench tests a system using rendering, and here the HP’s AMD chip scored 729cb. That’s comfortably ahead of the Core i3 chip, which score around 570cb. That indicates how much better the AMD chip is with tasks that require a bit of graphical grunt, too. It’s the same story with the Ryzen 7 Pro 2700, which scores around 1500cb in the Cinebench test.

The AMD hardware continues to impress in graphical tests. The HP’s Vega core scored 1708 points in the 3DMark: Fire Strike test. The Intel GPU inside all rival chips only scores around 1200 points in that test. The score is also a little better than the AMD FirePro W4100, which is available in a half-height configuration.

Of course, buying a low-profile, half-height card such as the Nvidia GeForce GTX 1050 will deliver a huge boost to graphics performance: that card scores around 7000 points in Fire Strike. 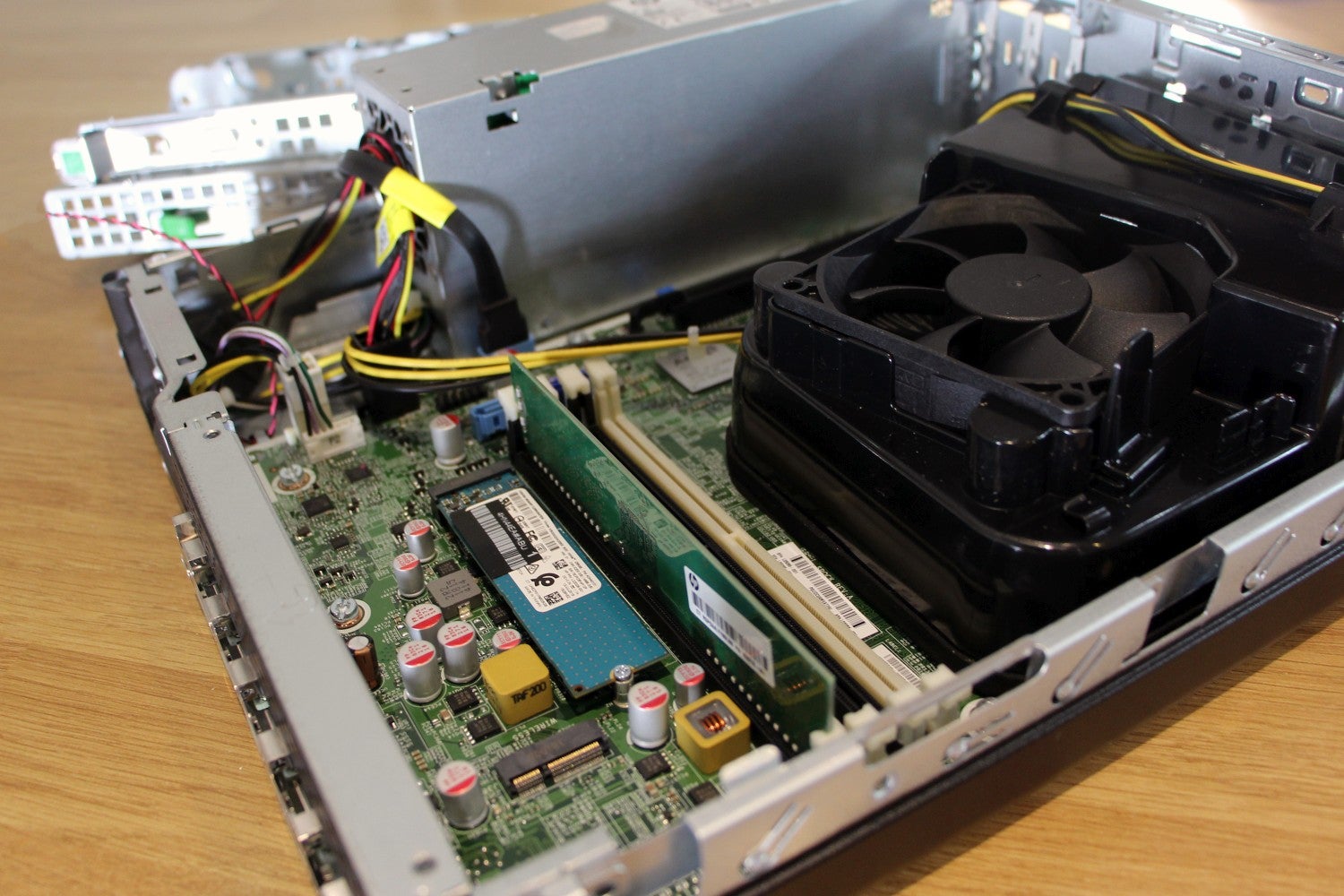 There’s one stick of memory, which is good for upgrade paths but not great for performance.

There is a caveat to the HP’s CPU-led benchmarks: the memory. All three versions of the EliteDesk have 8GB of memory, which on the face of it appears sufficient, but it’s installed in single-channel configuration. That gives you three free slots, but it also impacts performance. In Geekbench you lose around 1000 points due to the weaker memory, and in Cinebench the HP is about 70cb behind – so it’s about a 10% deficit.

There are no such problems with the SSD. Its read and write speeds of 1487MB/sec and 954MB/sec are fine. While not table-topping figures, they’re far faster than hard disks and SATA SSDs, and quick enough to ensure rapid system boot and application loading times.

So, with performance tested, what conclusions can be drawn from this AMD-powered HP EliteDesk?

The AMD Ryzen 5 Pro 2400G is a little slower than Intel’s price-equivalent Core i3 chips in pure CPU-based tasks, but it’s still easily fast enough for mainstream work. The AMD part is also better in graphical applications, and it has business features that Core i3 CPUs don’t include.

The AMD machine costs a little more than equivalent specifications with Core i3 inside. It’s also more expensive than the Core i5-8500 machine and CPU-based performance is better, plus that machine does have vPro – but the higher price is still worth paying for that graphical power. 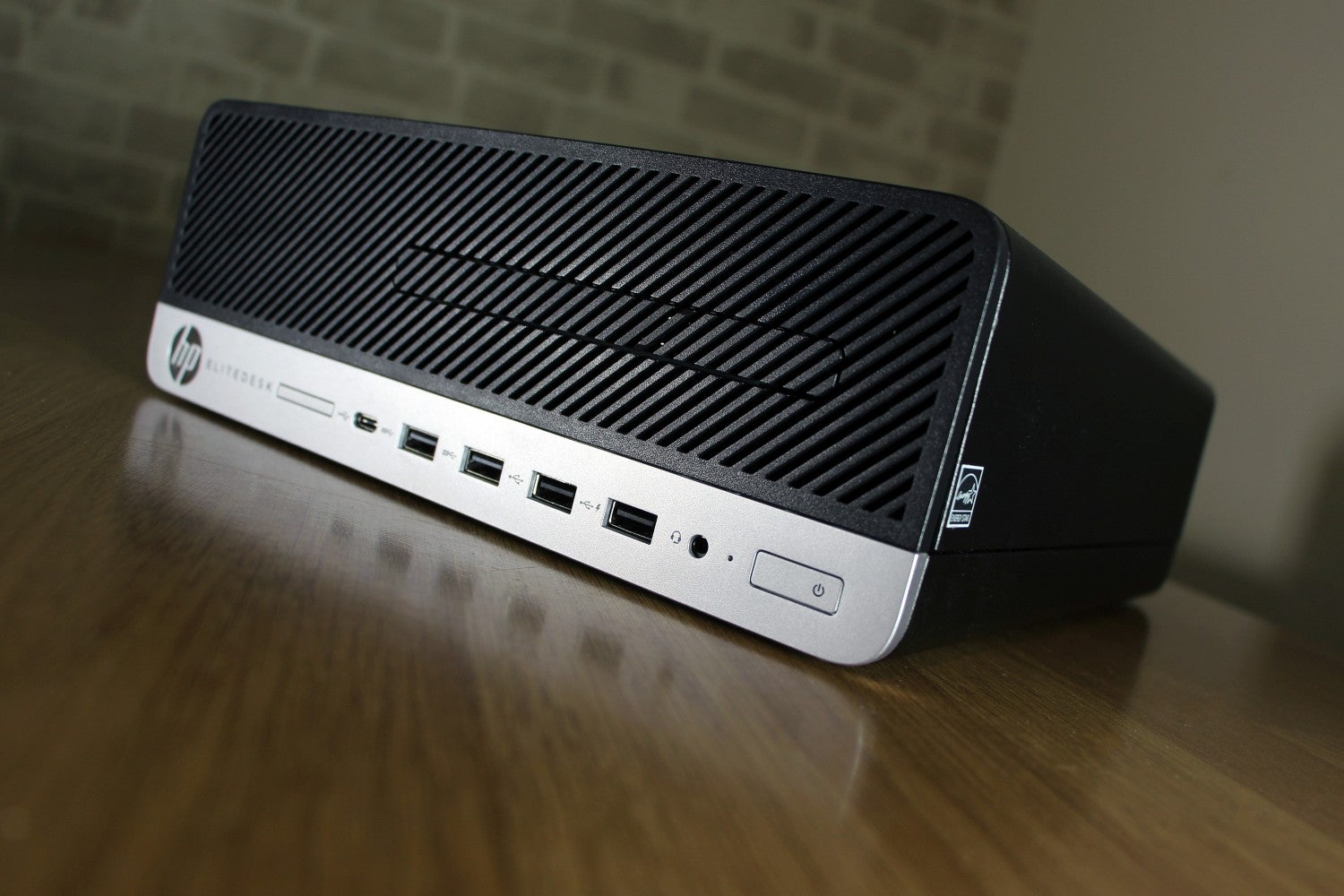 The rival Core i5-8500 and i7-8700 chips do have business features, and both are better than the Ryzen 5 Pro 2400G in applications, but they’re still not able to compete in graphical tasks.

In addition, while the £628 or £659 Intel machines are cheaper than either AMD option, I’d still rather spend £875 on the HP with the AMD Ryzen 7 Pro 2700 thanks to its extra cores, better graphics ability and improved multi-tasking performance.

I’m talking about relatively slim margins here, of course. All of these machines will handle day-to-day work with ease. If you don’t require extra business features or graphical power, Intel is cheaper. If you do need all of those features alongside better multi-tasking performance and more cores, stick with AMD.

Whether you opt for AMD or Intel hardware inside will largely be dependent on the tasks you need to run: for graphics work, lots of cores and lots of business features, head to AMD; for CPU-based tasks and single-threaded ability, opt for Intel. Happily, all specifications have the grunt for day-to-day computing.

Aside from the component choices, there’s a lot to like about the EliteDesk. It’s small and smart, with relatively easy access to every part of the machine – so servicing and upgrading won’t be difficult. Build quality is solid, and there are plenty of software options. It’s just a shame that the port selection isn’t as good as it could be.

If you’re after a small, versatile machine for an office, the EliteDesk fits the bill. Just consider the applications you’ll be running and the components you need before placing an order.

The HP EliteDesk offers solid design, with a small footprint, components that are easy to access and numerous business features. Its AMD chip is good for work, especially as a result of its Radeon graphics core. Intel’s CPUs are better for pure processing, though, and the port selection could have been better. Nevertheless, this remains a versatile, impressive small PC that will suit plenty of office environments.