The Folio’s 12.5in panel has a 2,560 x 1,440 resolution. This matches the Lenovo’s resolution and is better than the 1080p screen used in the HP ZBook. The smaller screen size means the Folio’s panel is the sharpest here: its 235ppi density level is higher than the 14in ThinkPad, and it’s marginally ahead of the 13in Apple MacBook Pro with Retina display.

The 1440p panel offers the sharpness we’d expect from high-density screens, without falling foul of the issues associated with such high resolutions. Third-party tools look fine, and there’s no need to use Windows’ own scaling: fresh from the box, the Folio uses the default size settings and its desktop is covered with medium-sized icons, which are all legible.

The resolution is sensible: it has a matte layer, and quality levels are good. The 371-nit brightness is exceptional, and ensures this screen has the punch to stay vivid outdoors and under office lights. It’s paired with deep black levels and a 1,197:1 contrast ratio – an excellent result that puts it ahead of its rivals. 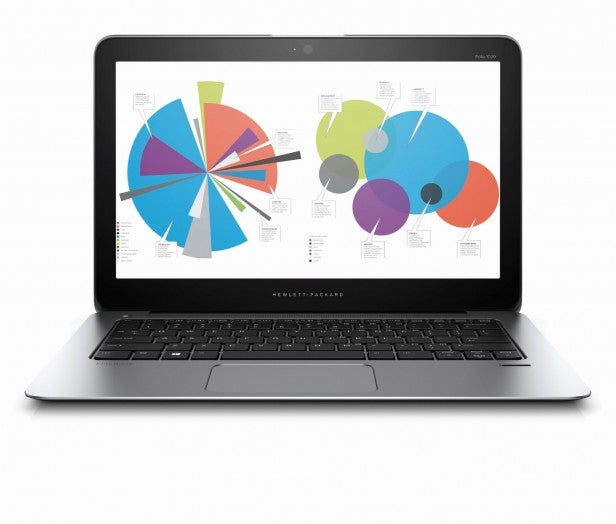 Colour accuracy is reasonable. The average Delta E of 2.5 is better than the Lenovo ThinkPad, and its 92.6 per cent sRGB coverage level is one of the best we’ve seen from a laptop. Slightly disappointing here is colour temperature – at 7,823K, it’s far too cool.

So, the resolution is high enough for serious work, the screen is bright and punchy, and its colours are accurate. The HP’s screen matches the Lenovo’s panel and it’s better than the ZBook.

However, audio – which emerges from the speaker grille above the keyboard – is underwhelming. The mid-range is fine, and there’s no sign of tinniness at the top-end, but there’s barely any bass, which means there’s no depth to music and movies.

The Folio has one of the most intriuging trackpads of any Windows laptop currently on the market. It uses the fourth incarnation of a Synaptics technology called ForcePad, which has been around for several years. It combines the gestures we’re used to seeing on Windows notebooks with some of the functionality that’s recently arrived on Apple’s Force Touch pads.

The ForcePad doesn’t have discrete buttons, and it doesn’t click down when it’s pressed – instead, it’s a pressure-sensitive unit that registers clicks and gestures depending on how hard you press and how many fingers you use.

It’s initially confusing, especially since the Folio’s trackpad lacks the motor to replicate a clicking motion, as seen on Apple’s Force Touch pad. Instead, the speakers play a clicking sound whenever a press is registered, although we’re not sure how that helps if music is playing or the laptop is muted. 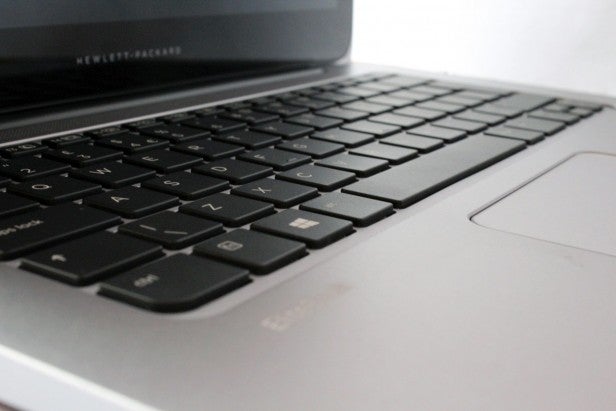 Thankfully, there’s a tutorial. The app illustrates the customisable pressure point at which a click is registered, and then gives demonstrations of right-clicking, dragging, scrolling and pinch-to-zoom. Most functions work in their usual fashion, but can also be modified by using varying pressures on the pad. Scrolling, for instance, is quicker if you push harder. Swiping from the side loads normal Windows 8.1 and 10 gestures, and a taskbar icon is ever-present for settings access.

Some functions aren’t as smooth as they are on more conventional pads: pinch-to-zoom can be slow; and dragging works with one or two fingers, but neither is particularly comfortable.

So while the EliteBook Folio 1020 G1’s trackpad is better than its previous efforts, it’s still a mixed bag. The choice to provide feedback through the speakers rather than the pad can sometimes make it tricky to detect if a click has registered.

The keyboard is more conventional. It features good-sized keys and a sensible layout, alongside a solid base for typing. The action lifts it into the top tier of business notebooks, with snappy, consistent keys and reasonable travel.

The HP’s keyboard is more than good enough for work, but it isn’t the best around. On the Windows side, the Lenovo ThinkPad’s keyboard offers more travel, and Apple’s laptop keyboards – with their greater travel and a firmer action – are still at the top of the heap.