It’s not often we take the time to look at high-end mobile workstations, but rarely do they have much to offer beyond being big and powerful. Not so the HP Elitebook 8730w Mobile Workstation. For sure, it is still big and powerful, but it also comes with an RGB LED backlit display that can reproduce the Adobe RGB colour space in full, making it perfect for anyone who does colour-sensitive work. 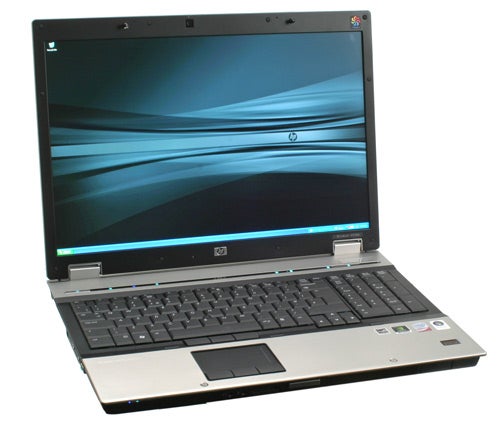 Due to its high colour display HP has opted to give the 8730w its DreamColor brand treatment, though this shouldn’t be confused with the sort of performance offered by the astounding LP2480zx. Nonetheless, as notebooks go an Adobe RGB capable display is about as good as it gets, so there’s hardly cause for complaint.


Until you look at the price, that is. At £2,300 this is up with the most expensive notebooks we’ve ever reviewed, but then considerable processing power, security and a high quality screen was never likely to come cheap and you do get a lot of machine for your money. Starting things off is the Intel Core 2 Duo T9600 that runs at a brisk 2.8GHz and features 6MB L2 Cache. Outside of Intel’s Extreme series of processors there’s no faster mobile CPU.

This abundance of power is backed by 4GB of DDR2 RAM, though this is a single module so isn’t in dual-channel mode. An odd move, you might think, until you realise it means you can upgrade to 8GB whenever you feel like it without wasting the installed memory. For storage there’s a 320GB hard drive, which could also be construed as a bit miserly were it not for the fact it’s a 7,200rpm drive that’s free-fall protected. Graphics processing, meanwhile, is taken care of by an nVidia Quadro FX 2700M with 512MB dedicated memory that should provide plenty of grunt for applications.


As this is a high-end business machine the usual array of security measures apply. This means a Trusted Platform Module for security and encryption wedded to both a smart card reader as well as fingerprint authentication. This is also a vPro certified system, so will play nicely with a corporate network that utilises Intel’s management protocols. Network connectivity, meanwhile, is comprehensive. There’s gigabit Ethernet for fast wired connections, in addition to Draft-N Wi-Fi for faster and extended range wireless and Bluetooth 2.0+ EDR for seamless connection to mobile devices.

There are four USB ports in total, one on the left, three on the right, and these are joined by an eSATA port, mini-FireWire, a 54mm ExpressCard slot, the Ethernet port, a modem jack, a smart card slot, headphone and microphone jacks and a memory card reader. Only video connectivity could be fairly criticised, since we’d like to see DVI or DisplayPort joining the HDMI and VGA offered here. Moreover, given the size of this machine, there seems little rhyme nor reason to this exclusion – particularly DVI – which is arguably more suitable for connection to external monitors.

Being a business machine the 8730w sports a demure but classy appearance. Brushed aluminium inside and out certainly lends it a premium feel and contrasts nicely with the matte black plastic used inside. Everything about the machine looks and feels like quality, which is just as well given the price. 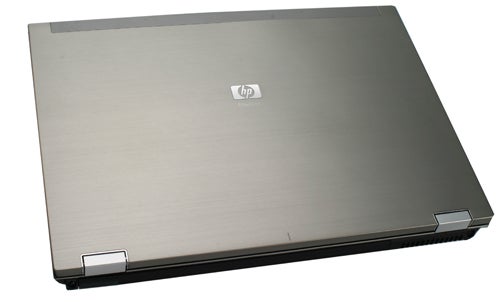 Being a substantial piece of kit it’s no surprise to see a full-size keyboard, with numeric number pad, dominating proceedings. It’s a very good effort, too. Keys have a firm and positive feel to them and the basic layout of the keyboard can’t really be faulted. It’s still not quite up to ThinkPad levels of refinement, but HP is certainly among the best of the rest in this regard.


Another staple of the business notebook is a combination of touchpad and trackpoint and the 8730w doesn’t disappoint here, either. Nestled in the middle of the keyboard is the trackpoint, which is slightly concave to aid control, while the touchpad below is large and accompanied by a trio of satisfyingly chunky, hinged buttons. As is the trackpoint for that matter, ensuring you don’t have to move your hands from the keyboard just to perform basic tasks.

Above the keyboard are a set of touch-sensitive controls. These comprise all sorts of things, including a toggle switch for the wireless radios, a shortcut to HP’s Protect Tools software and volume controls. They all work well enough, proving to be responsive and accurate, while adding some useful and convenient functionality.


Important as the keyboard and cursor inputs are to any notebook, though, as far as the 8730w goes it will live and die on the quality of its screen. Besting the other LED RGB equipped notebook we’ve seen, the Dell Studio XPS 16, the 17in 8730w has a 16:10 ratio display that offers a productivity enhancing 1,920 x 1,200 resolution. As you would rightly expect it also has an anti-glare finish, making it more at home in brightly lit offices than consumer focussed machines. 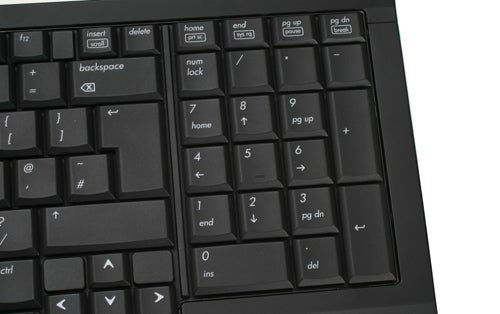 In use we found the display nothing short of stunning. It’s bright, sharp and has wide viewing angles, so even a large group of colleagues can view what you’re working on without impediment. Most vital, however, is the bundled software that allows you to control the display’s colour settings. You can choose between three colour spaces, sRGB, Adobe RGB or Full (unrestricted), as well as set your desired white point (colour temperature). This sort of flexibility makes the 8730w ideal for someone working with images, where they can switch between sRGB for viewing and editing photos for web pages, then go to Adobe RGB when dealing with CMYK print-based, post-production imagery.

In raw performance terms, the 8730w delivers on pretty much every front. In PCMark Vantage it performed admirably, showing itself capable of chomping through even intensive tasks with ease. We would add, though, that the single RAM module does hold it back in places, particularly in the memory test, as does the use of DDR2 RAM instead of faster DDR3. Given this is an expensive high-performance system it is surprising HP has gone down this route. 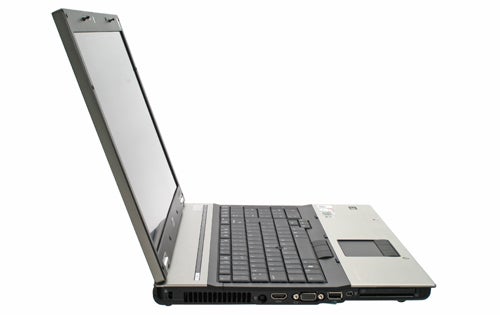 Setting aside that small disappointment for a moment, however, the 8730w delivers some very impressive battery life figures for a notebook of its size and specification. In the MobileMark 2007 Productivity test it easily exceeded two hours and 30 minutes, while the idle Reader test produced a result in excess of three hours. Even the DVD test, where we look for a worst case scenario, returned a decent one hour and 55 minutes runtime. Enough time to watch most films.


Moreover, HP offers a couple of useful ways to supplement the standard eight-cell 73 Watt-hour battery, via a secondary connection on the bottom of the machine just below the docking station connection. First is the HP Extended Life Battery, a 52 Watt-hour pack, which attaches to the bottom and charges the primary battery pack up to 90 per cent in 90 minutes. Then there’s a 12-cell Ultra Capacity battery that, when combined with the primary battery, could offer in the region of four hours use. Of course, such advantages are tempered by the reduced portability, but if you need as much battery life as possible then these options will be very welcome. 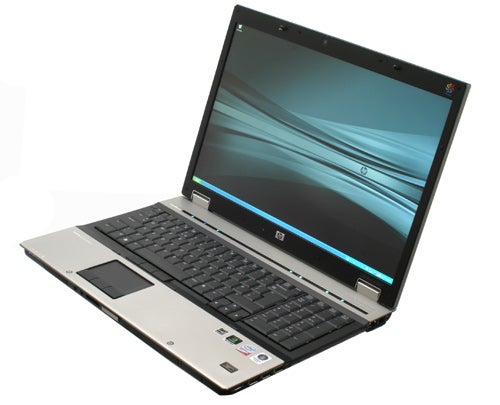 
HP packs most of the ingredients of an excellent mobile workstation into the 8730w. It has a fantastic screen, is powerful and well featured, and if you do need to take it out there are plenty of options for extending the battery life. However, it is very expensive and despite the massive price tag it does lack a few small but obvious things, like a DisplayPort or DVI video output. As such we won’t recommend it outright, but if it fulfils your needs it shouldn’t disappoint. 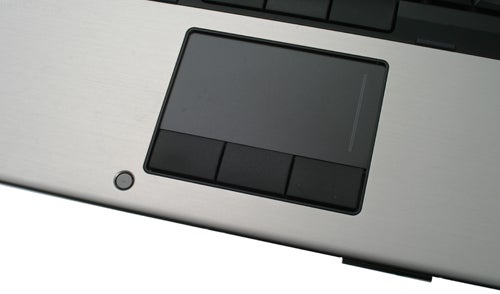 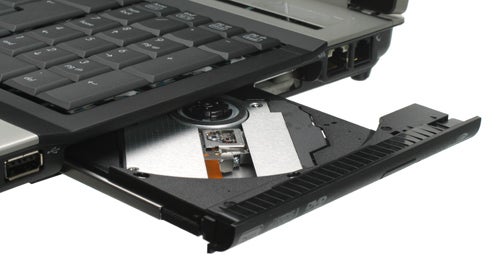 (centre)”’PC Mark Vantage shows this is an extremely quick machine that should be able to deal with almost anything thrown at it.”’(/centre)

(centre)”’For such a large machine, two and a half hours of use is very good.”’(/centre)

(centre)”’At 100 per cent brightness, nearly two hours of runtime is a good effort.”’(/centre)