First things first, this is a very slow DVD writer, at least it is by modern standards. In fact it’s been many months since I’ve seen test results as slow as those turned in by the HP dvd640i, but this drive isn’t about raw performance. In fact, despite it’s undoubtedly tardy behaviour it has one trick up it’s sleeve that no other DVD writer I’ve reviewed has exhibited – LightScribe functionality.


I first saw LightScribe in action back in October 2004 when I attended an HP product showcase in Monte Carlo. It was something that definitely caught my attention – something that isn’t easy when you’ve been covering technology for as long as I have. Basically LightScribe is a method of printing labels onto optical discs without using either a printer or a label. 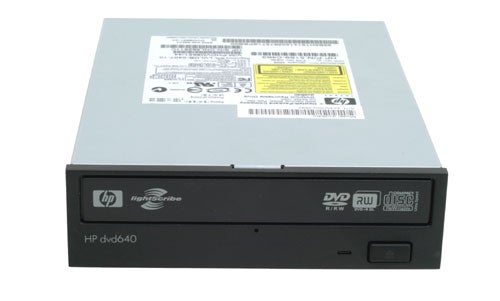 Using special LightScribe media, the HP dvd640i can etch an image or text onto the top of a disc. The etching is done using the laser inside the drive and it means that even notebook users can create professional looking discs while they’re on the move. The results are, in my opinion at least, pretty damn impressive and you also don’t have to worry about sticky labels peeling off inside your CD player.


Because HP invented the LightScribe technology, it had an exclusive period where no other optical drive manufacturer was allowed to produce a drive, but I fully expect to see every DVD writer supporting LightScribe in the future, after all any extra functionality is good for the end user.


Using Verbatim branded LightScribe CD-R media I dropped a JPEG image into the supplied labelling software and set it burning. It took a not insignificant 33 minutes and 11 seconds to burn the image onto the disc, so it’s not something you’d be able to do in a hurry. That said, the less complicated the design, the less time the burn will take, but even at just over half an hour I don’t think it’s too bad – I’d just go and grab a cup of coffee, or even just get on with something else while the disc is being labelled. 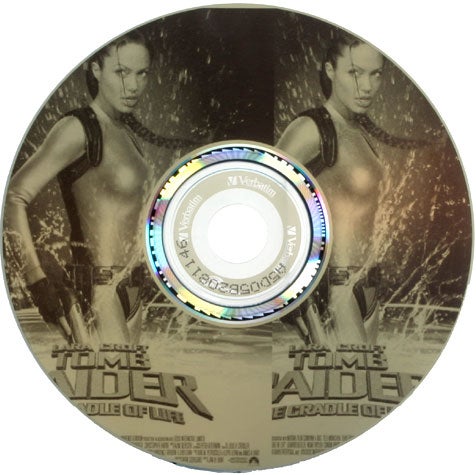 The dvd640i comes in a full retail box – inside you’ll find the drive itself, three multi-lingual paper manuals, a quick start guide and some mounting screws. There are three discs included – an HP driver disc which is needed to enable the LightScribe features, a copy of Sure Thing disc labelling software (with LightScribe support) and a blank LightScribe CD-R disc (supplied by Verbatim). Unfortunately there is no IDE cable, which is disappointing for a retail boxed product like this.

Using the Sure Thing software is very simple and you’ll be labelling your LightScribe discs in no time at all. Simply select LightScribe as your label type, then you can add text or just import an image from anywhere on your PC. Once imported you can drag the image around a virtual representation of your disc until you have it lined up just right, then it’s just a matter of clicking the print button and amusing yourself for half an hour.


Talking of finding ways to amuse yourself while you’re waiting, it’s probably about time that I covered the subject of writing performance. First let’s look at the basic specifications. The dvd640i is a 16x drive, but only when it comes to DVD+R media, while DVD-R discs are still limited to 8x burning. Both DVD+RW and DVD-RW discs are written at a very conventional 4x, but it’s the 2.4x DVD+R dual layer writing that’s really going to leave you twiddling your thumbs, while the complete lack of support for DVD-R dual layer is also a slight worry. I downloaded the very latest firmware and flashed the drive in the hope of improving these specs, but alas, it made no difference to the burn speeds. 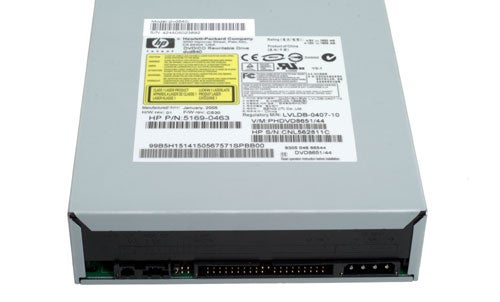 Looking at the tests, the 16x performance using DVD+R discs was pretty average with every result over six minutes, but the dvd640i really started to fall behind the competition with its 8x DVD-R writing. However, when it came to DVD+R DL performance the HP proved to be nowhere near recently reviewed drives – the dvd640i took a mammoth 46 minutes 23 seconds to burn 8.1GB of digital images, compared to 19 minutes 55 seconds on the NEC ND-3540A. That’s a massive difference, so if you’re intending to burn a lot of dual layer media, this probably isn’t the drive for you.


The dvd640i also isn’t the fastest CD writer on the block, mainly due to its 40x CD-R performance, which is a step behind the 48x offered by most modern drives.


The last consideration is price, and once again the HP finds it hard to compete with other units on the market. With a price of £51.43 for the retail box, the dvd640i is far from cheap, and you can buy much faster drives for far less. Of course those drives won’t be able to offer LightScribe functionality, and that has to be the deciding factor here. If you really want to burn LightScribe discs, this is the drive to have, but you’re going to have to accept the below par writing performance.


There’s no denying that LightScribe is a superb feature and one that I would love to have in my PC. Unfortunately, the dvd640i is just too far behind the competition when it comes to performance, and my advice would be to wait for the next generation LightScribe compatible drive and get the best of both worlds.