When we reviewed the Deskjet D5560 a couple of weeks ago, we were impressed by the price of this wireless inkjet printer, but the Deskjet F4580, reviewed here, is a full wireless all-in-one available for under £45. Aimed at the home customer who is more interested in printing documents than photos, it nonetheless can still handle the occasional photograph. 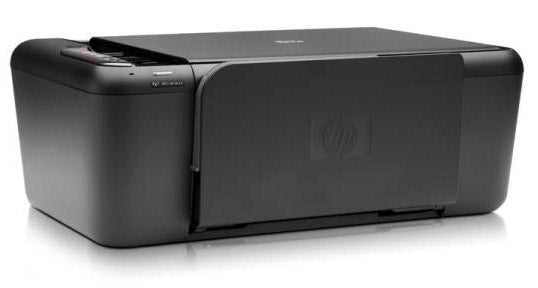 All cased in textured and gloss black, the scanner is well integrated into the case and the lid lies at the same level as the surrounding rim of the machine. At the front, the paper tray folds up out of the way, as with the Deskjet D5560 and as with that machine, you have to clear the desk in front of the F4580 before you start printing, and find somewhere to store the paper when you’re not using it, or risk dust and spillages on the paper.


The control panel is unusual in being recessed into the top of the device, below its surrounding rim, and uses a series of five LEDs to indicate copy settings. It has two LCD indicators, too, with the same custom ink indicator as the Deskjet D5560 and a seven-segment display for number of copies – a maximum of nine at a time.


The column of six buttons down the left-hand side of the control panel, for functions like black and colour copy and job cancel, are also unusual in all being made from one strip of flexible plastic – simple, but functional. 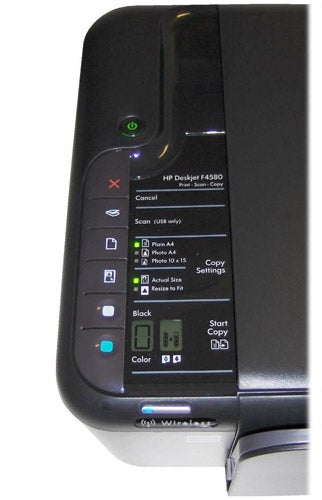 While you probably wouldn’t expect memory card readers in an all-in-one intended primarily for document printing, it would have been useful to have a front-panel USB socket, so you could print files from a USB drive. This would be hard to use without a more costly alpha-numeric LCD, though, to show the filenames it contained.


The Deskjet F4580 runs on the same two ink cartridges as its single-function counterpart and these clip into the head carrier, once you’ve folded down the front cover for access. Sliding in the cartridges and pressing them up into position is fiddlier than loading cartridges on some other machines.


HP provides drivers for Windows and OS X 10.4 and above on the supplied CD, but there’s no indication of support for Linux users. The HP Solution Centre and a copy of Windows Live Gallery are provided, giving basic functionality for scanning, as well as printing.

The device is rated at 9.5ppm printing black and 6.5ppm printing colour, both in normal print modes. These ideal speeds weren’t realised in our tests, largely because of processing time before starting to print, but also because of hesitations during print. The machine would be smoothly printing a page of text or text and graphics and would then stop for half a second or so, before continuing as before.


We were running the machine through its wireless connection during tests, which we do for all wireless-capable printers, but the signal strength was in the top, ‘Excellent’ band. We didn’t see these kind of pauses when testing the wireless D5560, which uses the same print engine. 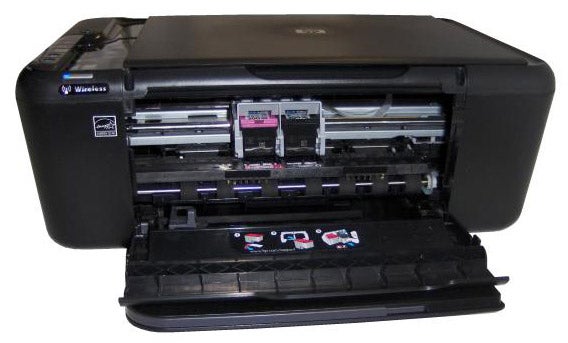 The five-page black text print took 54 seconds to complete, which is equivalent to a speed of 5.56ppm. When we increased the run to 20 pages, the speed actually dropped to 5.31ppm, because of these pauses. This speed is an average of the three runs we measured. The five-page black text and colour graphics test took 2 minutes 23 seconds, a speed of just 2.10ppm. A 15 x 10cm photo print on A4 paper took a reasonable 1 minute 29 seconds.


The quality of the print reproduced, as you might expect, was similar to what we saw from the DeskJet printer. Black text is dark and dense, but there is some fuzziness around characters, particularly emboldened ones, indicating feathering into the paper fibres. This is only slight, though. 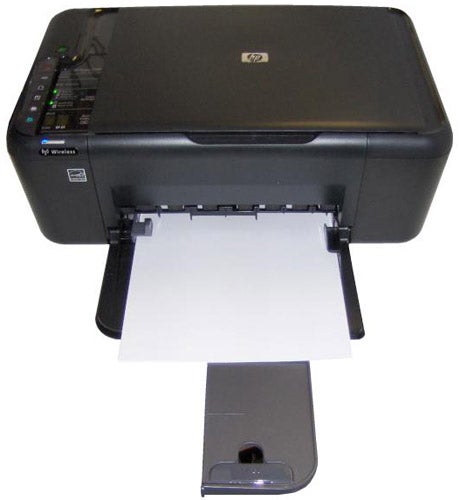 Colour graphics are bright and attention-grabbing, with no obvious signs of dither patterns though a colour photocopy did show some lightening of colours, but is still very usable. A photo, on HP’s Advanced Photo Paper, was well reproduced, with natural colours, smooth gradations and good levels of detail, even in darker, shadowed areas.


The running costs of this machine are identical to those from the Deskjet D5560, coming out with a page cost of 3.96p for an ISO black page and 8.97p for ISO colour. These costs are both high in comparison to the machine’s direct competitors, one penny per page or a little more, depending on the page content.


If the single-function Deskjet D5560 looked like good value, the Deskjet F4580 all-in-one looks like excellent value, but you have to take into account running costs and this is where HP makes its money back. Even so, in all other respects, this device punches well above its weight and has to be a contender for anybody after an all-in-one at under £50.