The Deskjet 1050 is the entry-level general-purpose all-in-one in HP’s range, while the Deskjet 3050, reviewed here, is the next model up. It looks superficially like the cheaper machine, but is claimed to be faster and has a 38mm LCD like its single-function stablemate, the Deskjet 3000. 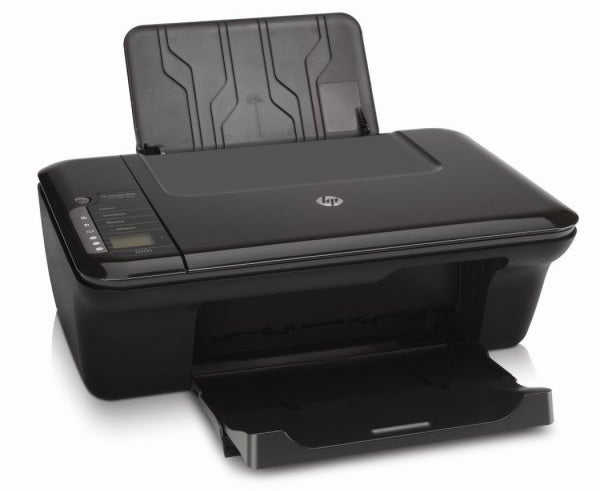 The styling of the Deskjet 3050 is very similar to the DeskJet 1050, except that the high-gloss top surface is more of a very dark brown than jet black. The paper feed tray support, which flips up from its resting position on top of the printer, has the same glossy finish and a maroon go-faster stripe highlights the join between the scanner and its cover. The paper guide is picked out in the same maroon colour.


The control panel uses a column of seven flexible-strip buttons to switch the wireless transceiver on and off, to scan a document, to print quick forms and to cancel a current job. There are three soft buttons, linked to the LCD display, which take on different functions depending on the menu context. 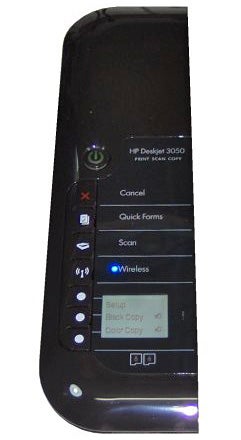 Additionally, there are indicators for both of the inkjet cartridges, one for errors, one to indicate wireless activity and one set into the circular power button, which pulses gently when the machine is in standby.


The 60-sheet paper tray feeds out to a chunky output tray at the front. This folds down and telescopes out to take printed pages. Inside the printer is a second pull-down cover, and behind this are the carriers for the two ink cartridges.


The only sockets at the back are for the low-voltage power cable from the small, block power supply and for a USB cable, in case you prefer this data connection or need to use it during wireless setup.

Setup is straightforward and offers WPS single-button connection, if your wireless router supports it. Otherwise, you have to enter a WPA pass code on a connected computer to complete the link.


The two cartridges, black and tri-colour, slide in and clip up into their respective holders and software for Windows or OS X installs from the supplied CD. There’s a copy of HP’s Photo Creations available for download, too, which gives you basic photo manipulations and print-based projects. Pre-programmed forms for home office and leisure are available directly from the control panel.

Strangely, HP rates this all-in-one at 20ppm and 16ppm in draft mode, noticeably faster than the DeskJet 1050, while the normal mode speeds are identical between the two. Under test, draft mode on the DeskJet 1050 was quicker, returning a speed of 7.9ppm, while this machine only managed 7.3ppm.


The other speeds were comparable between the two printers, with typically a couple of seconds either way in the test times. We saw 5.5ppm for our five-page document, rising to 6.4ppm on the 20-page one. The five-page black text and colour graphics test gave only 2.3ppm, though a single-page colour copy completed in a comparatively nippy 28s. 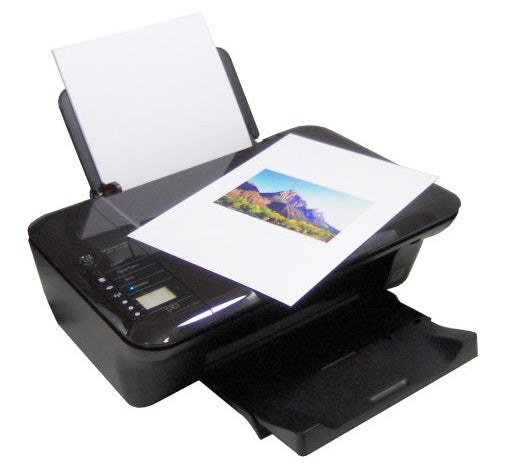 The text prints we obtained from the machine were below average, with noticeable blurring around some characters, fade out on some thin strokes and misplaced ink dots at various points on several pages. Draft mode pages suffered from the same print faults.


Colours are vivid and clean, though with some slight banding and a bit of blurring in text over solid colours. A colour copy was quite close to the original in colour hue, though textures in solid areas became more noticeable. A colour photo on HP Advanced glossy paper is well detailed over a range of different shades, though not as bright as we’ve seen from other machines in the range.


The black and colour cartridges are available in two capacities and the higher capacity, XL versions produce costs very similar to the other Deskjets we’ve looked at recently. A black page cost of 4.6p and a colour one of 10.0p are both in the same order as entry-level all-in-ones from other suppliers.


This is another serviceable, budget all-in-one, where you only pay about a fiver extra for the LCD display, which is a useful extra providing worthwhile feedback. Speeds and running costs are both acceptable for this class of machine, but the print quality from our test sample really wasn’t there. While this may be an issue from this particular review sample, the fact that the same engine can vary between models may cast doubt on quality control within the range.