If you have a need to print pages larger than A4, but not as big as traditional wide-format printers, the DesignJet 90r could be just what you’re looking for. Aimed at the graphics professional, it can print at sizes up to A2+, while still sitting on a desktop, albeit a big one.


HP’s printer appears functional enough, with room for a status display and small control panel to the left of the main carriage and print heads and cartridges to the right. There are six coloured inks with, interestingly, the cyan and magenta slots taking 28ml cartridges and all the other colours, including light cyan and light magenta, coming in 69ml tanks.


The ink tanks are not integrated into the heads as is common in smaller HP printers, though each of the heads plugs into the separate head carrier and should be replaced at regular intervals. Exactly how often though is not clear. Just to be really helpful, HP has quoted this as ‘every 400ml’. So for cyan and magenta it will be roughly every 14 cartridges, while for the other colours it will be every six cartridges. The number of pages will depend on the size of paper and the amount of ink cover. 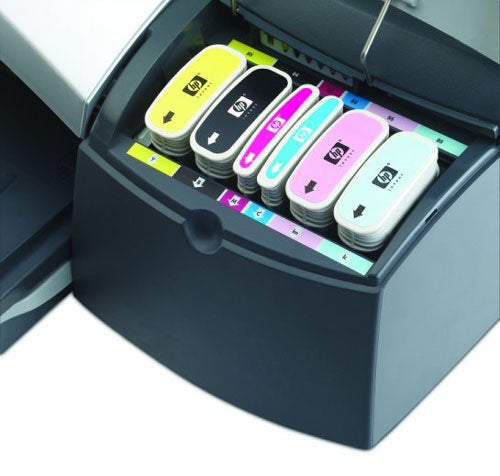 The paper tray can be filled with sheets from A4 up to A2+, though with only one size at a time, and can take plain or photo media, either gloss or satin. The printer feeds from the front and makes a 180-degree turn before feeding out to the front again, onto the output-tray.


The ‘r’ designation in the DesignJet 90r refers to a roll paper feed, which fits onto the back of the printer. It can be fed into the printer in place of cut sheets and the printer will guillotine the sheets to custom length automatically, depending on the size of the printed image.


Installation is straightforward, if a bit more longwinded than on a smaller ink-jet. You first have to install the paper-feed tray, its cover and a separate paper-out tray, before switching the printer on and waiting for its back-lit LCD status display to flash its empty ink icons at you. 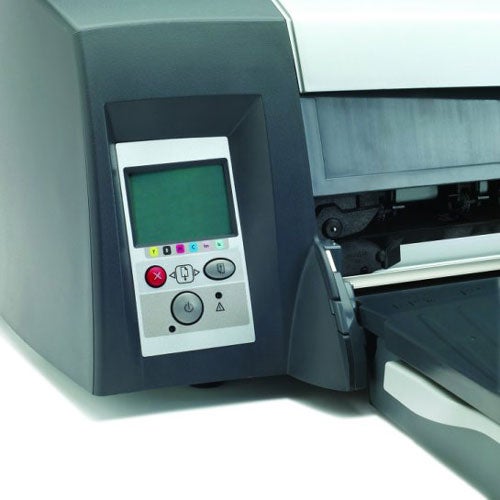 You then install each of the six ink-cartridges in turn, followed by the replaceable print heads. When this is all done, you install the software on your PC, only connecting the printer, via the supplied USB cable, when asked to do so. A parallel connection is also provided, but Ethernet is an optional extra.


There are one or two odd design choices in this printer, like the way you have to open its main cover before you can lift the paper-out tray, to refill or change the paper.


We’d also have found it more helpful to have had an alphanumeric status display, rather than the icon-only approach adopted by HP. It’s not always obvious what the icons are alerting you to, without referring to the manual.

Print speeds on large format printers are never that good on small paper sizes and the DesignJet 90r took nearly four and a half minutes to print our five page text document and over two and a half to complete our 15 x 10cm photo print. Even when printing larger pages, though, when it should come into its own, it took 5:15 for an A3 page and just under eight minutes for an A3+ one. If you’re using the printer commercially for multiple prints, these times could have a direct effect on the number of pages you can charge for in a day. Compare them with the speeds from the Canon i9950 and the Epson Pro 4800, both reviewed recently.


Photo quality images are sharp and well detailed and the use of the two light inks, cyan and magenta, produces good toning and flesh tints. Black print on plain paper is not as dense as we would have liked – more of a dark grey – and there’s noticeable ink spatter around text characters.


The feed mechanism is quite noisy, much louder than when the DesignJet 90r is printing – we measured it at 53dBA printing, with peaks of 67dBA when feeding paper. It’s also quite vigorous; you really do need to use the end stop on the paper out tray, if you don’t want all your pages ending on the floor. 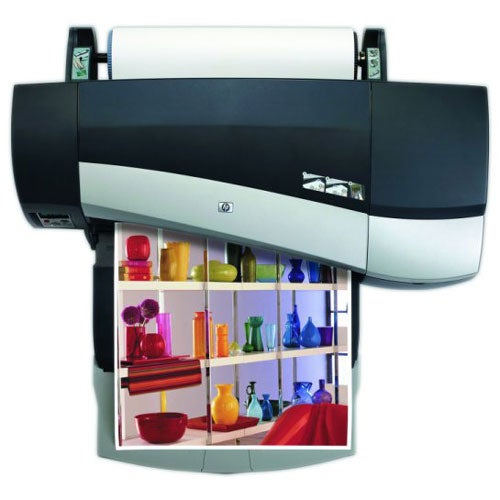 HP couldn’t supply us with figures for running costs, sighting the number of different media and print types (vector, bitmap graphic, photo) the printer could produce. With the large capacity of the ink cartridges, we couldn’t run them to exhaustion, either. There is an HP profit calculator here, but this deals only with roll paper and gives results in dollars or euros. Approximate costs come out at £1.65 for an A3 photo print, but we’re suspicious of the calculator, as there’s no indication if ink and print head costs are included. This level of support on TCO is unsatisfactory. Without the cost for a set page size at specified cover, it’s very difficult to compare costs between the DesignJet 90 and LF printers from other manufacturers.


This is a reasonably convenient printer to use and can handle a wide range of different sizes and qualities of paper, up to A2+. It’s not that quick though and its status display could be more helpful. Colour print quality is good, though black could be blacker and there’s some spatter. Running costs are largely unknown, because obtaining data on this printer from hp proved to be a bit like trying to nail jelly to the wall.