There’s always more to a standard business desktop computer than meets the eye. Design choices can influence a PC’s usability and reliability, and affect how much it costs to manufacturer and in turn, the asking price. HP’s dc7700 is aimed at the small office or the larger institution installing on a one-per desk basis.


This is a slimline, black PC with a silver front, which can be mounted horizontally or vertically between a pair of supporting feet. It has room for single 5.25-inch and 3.5-inch drives, mounted one above the other and on the review sample, there’s a 16-speed DVD rewriter with LightScribe, but no 16-in-1 memory card reader, which some other models in the range include. There was a copy of MS Office 2007 installed on the review PC, but this is only an option on the spec sheet and isn’t included in the price quoted here.

Below the drives are a couple of USB 2.0 ports and jacks for microphone and line out. Moving to the back, there are legacy serial and parallel sockets, as well as six more USB 2.0 connectors and one for a Gigabyte Ethernet network. With a total of 10 USB sockets, the dc7700 is pretty expandable, for a small business PC.


The graphics adapter is on-board, so none of the available expansion slots – two PCI and one each at single-speed and 16-speed PCI Express – is occupied. There’s therefore a good deal of potential for adding extra cards.


The PC is built around a Core 2 Duo processor, running at 1.80GHz and with 2MB of L2 cache shared between the cores. There’s 1GB of main memory as well, which is ample for Windows XP, but you may find it restrictive if you later switch to Vista and want to run several heavyweight applications. There are four memory slots in the PC though, so you can add memory without having to replace what’s already there.

A good bit of engineering design has gone into the cooling of this machine. There’s a large (for a slimline PC) 92mm fan drawing air in from the front and pushing it through the fins of a substantial, heat-piped heatsink on the Core 2 processor. An 80mm fan sucks it from the other side, too and pushes it over the fins of the heatsink on the bridge chip. This complete, through-flow system keeps the PC very cool, so you shouldn’t have any heat-related troubles – it’s quiet, too.


Setup is very easy, as there’s only a keyboard and mouse to plug-in, along with power cables. The system doesn’t include a monitor, so you’ll need to provide your own or order an HP unit at the same time as the PC. 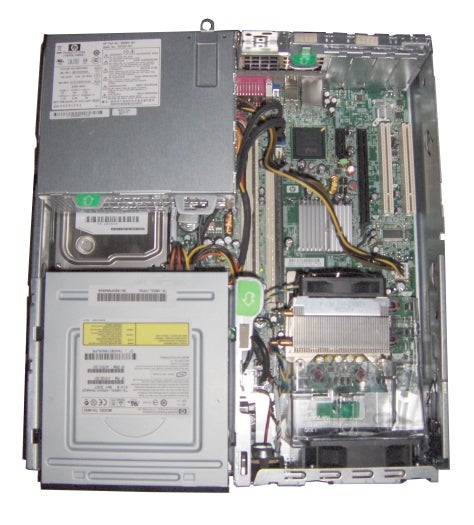 The dc7700 scored 3730 on PC Mark, which isn’t bad for a business PC, but is low in comparison with more media-centred designs. This is enough processing power to handle most of the Office tasks you might throw at the machine, but don’t expect to get it to edit videos in a hurry.


The keyboard and mouse are standard fare, with nothing extra in the way of special function keys on the keyboard and a simple optical mouse, looking like a rebadged Logitech device.


The PC is unobtrusive, thanks to its optional, vertical mounting, and was well-behaved during the entire test period. Given its tandem fan design, it’s also surprisingly quiet and these machines could be installed in a library without raising any hackles.


You need to be really careful when specifying this PC, as the model number dc7700 covers a whole range of configurations. The type number we’ve tested is the GK506ET and we can’t find anywhere selling it for less than a couple of pounds under HP’s list price. That’s a lot for a machine of this spec, and a quick look at the Dell site, for example, shows a PC with a better spec and including a monitor, for around £50 less.