At an HP press briefing I attended last year, HP representatives took much pride explaining how the company had a new found focus on the consumer. Its new products would be more liveable with, exude more personality and be more desirable. None of that is really evident in the Compaq nc6400, and actually that’s no bad thing at all. There’s no reason it should posses those qualities either, as the nc6400 is clearly a business notebook. 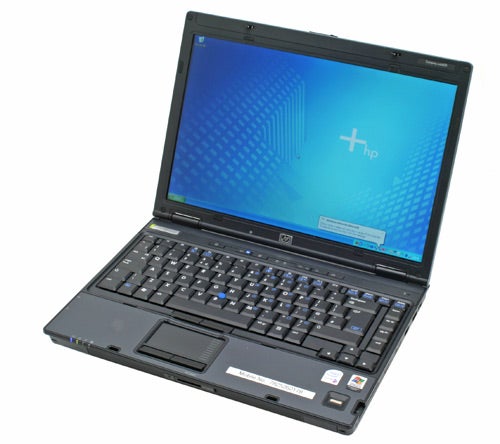 My first impressions of the nc6400 were rather negative, due to its rather drab, corporate appearance and indeed its specification – nobody needs a fingerprint or smart card reader for home use. However, after using the nc6400, I was quickly seduced by it’s dull but worthy charms.


The nc6400 is a medium sized notebook – it’s neither headline grabbingly small or overly big. Laptops are so named so that you can, yes, use them on your lap, but all too often manufacturers seem to forget this. The acid test was opening it up and using it on the train – it felt just right in terms of size and weight to use. At 2.3Kg, it’s no fly weight but it’s still practical to slip in into a shoulder bag and take it with you for the day.

The lid is held in place by a sliding grip and opening it up reveals a widescreen, 1,280 x 800 pixel display. I have to say that I was a little disappointed by the 14.1in screen – it’s just not as sharp as the best I’ve seen, or as bright. Its viewing angles are not fantastic, with colour shift both vertically and horizontally. However, for general text and office work it’s perfectly serviceable. Its conventional fluorescent backlight tech also makes the screen thicker than newer LED backlights on laptops such as the Sony SZ3XP. Then again, this notebook is a lot more affordably priced. 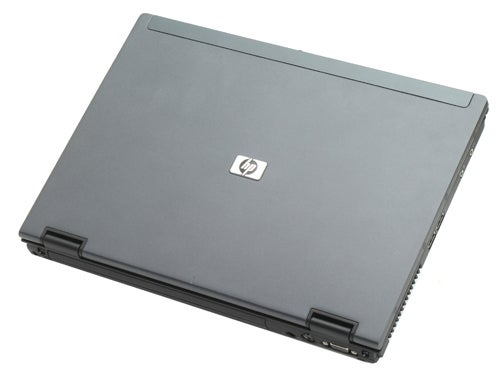 Beneath the screen you’ll find one of the best keyboards around. The keys have a matt finish that give them texture, enabling you’re fingers to grip. The travel is short but not overly firm – in a word, it’s excellent. The Backspace, Enter, and right Shift keys are all a good length, and the Page Up, Down, End and arrow keys are easy to access on the right. The blue of the function keys is a little overdone though. It does match the track point that sits in the middle of the keyboard. This is my preferred method of controlling the cursor on a keyboard as it means that in conjunction with the mouse buttons under the space bar you can move about the screen without having to remove your hands from the keyboard.


If you prefer the conventional track pad though, you’re fine, because there’s one nestling underneath – in correct widescreen aspect ratio and with a scroll area on the right. Above the keyboard you’ll find some shortcut buttons. There’s volume controls and a mute button and a switch to turn wireless the connections on and off. There’s also a ‘Presentation’ button that let’s you fire an application of your choice – presumably PowerPoint, and go into the correct power mode.

At the top left you’ll find the large silver power switch with a yellow light to indicate power – you know where you are with that. A microphone is located at the top right. At the bottom right you’ll find a fingerprint scanner – yes, Biometrics is the new black. It’s not foolproof but it’s a useful extra additional layer of protection. Someone may find out your password, but it will be harder to replicate your fingerprints. Once you’ve registered your finger, you can swipe to logon instead of typing a password.


On the left hand side of the notebook, you’ll find headphone and microphone socket, two USB ports and a PC card slot. I can only wonder why HP hasn’t moved to Express card, especially as with integrated HSDPA the most popular use for PC Cards is not applicable. Towards the rear there’s an exhaust fan for the CPU. It does spew out a fair amount of heat and the fan does spin up every now and then. 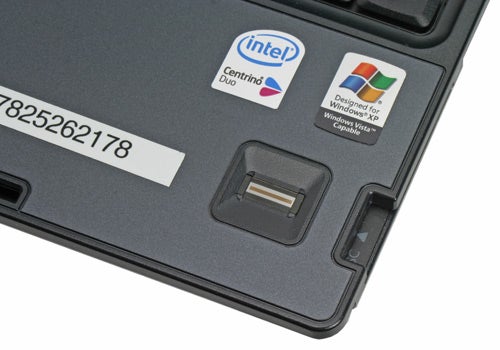 
On the right hand side you’ll find a smart card reader, making it fit right into corporate networks. The smart card reader is slotted just above the optical drive, but it’s just a ye olde, CD-RW/ DVD-ROM combo drive – so you can’t burn DVDs on it. What is really cool is that once you’ve removed a small screw, which can be left off, you can hot swap the drive out and replace it with a weight saver, which is great if you know you won’t need the drive during the day. Permanent storage is taken care off buy an 80GB Seagate spinning at 5,400rpm.


A third USB port is located on the right, while there’s also a Gigabit Ethernet port and a modem. Round the rear of the notebook you’ll find the power plug, and S-Video and VGA outputs – perfect for attaching to a projector for presentations. 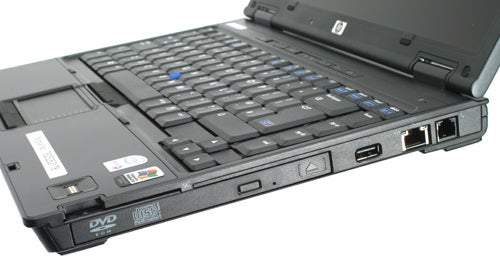 That’s the exterior of the notebook taken care of. However, the insides are pretty impressive too. There’s a T5600 1.83GHz Core 2 Duo running the show, along with 1GB of 333MHz RAM – this is supplied on one stick, which means that there’s no dual-channel support, but that can be remedied but adding a second stick. The 1GB supplied is not user accessible but more memory could be added quickly by removing the cover on the DIMM slot on the underneath of the notebook.


Graphics are provided by an integrated Intel 950 chip. It was set up with 128MB as shipped but can grab up to 244MB of system memory if required. It’s fine for business tasks that will be thrown at this but not really suitable for games. 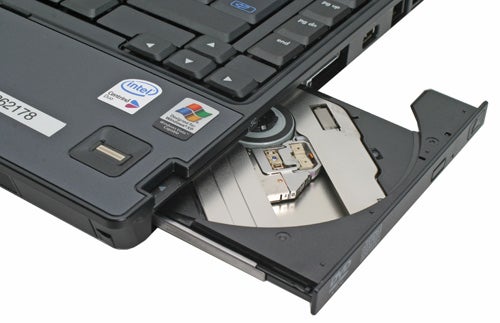 Wireless is naturally built in, but in addition to 54G Wi-Fi and Bluetooth, this HP has an integrated HSDPA SIM provided by Vodafone. To actually get this going proved to be a bit of a palaver. When I started the HSDPA application it told me the Wireless was switched off. I turned it on and tried again, but was asked to activate the SIM via web or phone. Once past this, the software then finally installed itself. After that you still have to accept the licence agreement and you’ll then be told that the Microsoft Wireless Zero configuration is conflicting with the Vodafone software – at least it offers to disable that for you.

Finally, I was able to connect but the wait was worth it. Being online while sitting on the train, or indeed anywhere you can get a signal, is liberating. It clearly is the future and having used it I would find it difficult to buy a notebook without HSDPA. Having it integrated is important too – it’s all so seamless – no cards to install, to stick out, to carry in your bag or lose.


The Windows installation is basic with Norton Internet Security making its usual appearance. No office suite is installed but HP does include a full recovery utility with an image located in the D partition.


One of the good things about HP notebooks is that you can accessorise them and a range of docking stations and extended batteries are available. 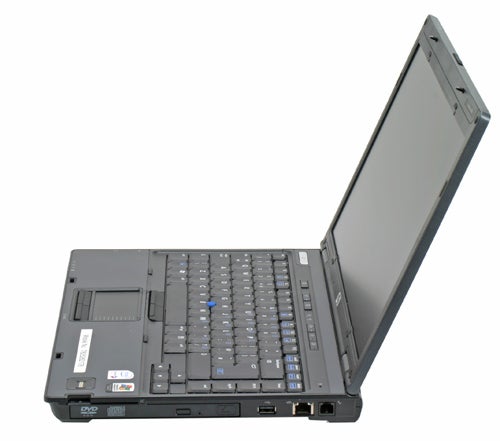 In terms of performance the HP acquitted itself well. For comparison I’ve put its number up against a Dell Latitude D620 that we reviewed way back in May last year. When we tested the D620 it shipped with a 2GHz Core Duo and if you’re buying now you’ll get a 2GHz Core 2 Duo as a minimum, but it’s still an interesting comparison as the Core 2 Duo in the HP is only running at 1.83GHz.


When plugged in the HP races past the Dell in SYSmark 2002, with 322 compared to 304. In PCMark 05 it’s almost neck and neck though the HDD score is better. The hard disk can have a noticeable impact on performance so that’s a bonus. The HP is constrained by only having a single DIMM, but if you add a second you’ll get the benefit of double the RAM, and dual-channel. If you plan to get it with Vista or upgrade later this would be a highly recommended upgrade.

In Mobile mark the HP held out for almost six hours – a really fantastic performance. It out lasted the Dell D620, though possibly because its power profile throttles the CPU more and the Dell was actually faster when unplugged. Of course this test was run with all the wireless features completely disabled so you won’t go for that long if you’re online but it’s a great starting point.


The HP then is an impressive machine. It’s built well, it’s fast the keyboard and trackpoint are excellent and it’s well featured too with the integrated HSDPA a real highlight. If you’re looking for a reliable business workhorse for yourself or your business, the nc6400 is a fine choice. The only real negatives are the average screen and the lack of Express card might be a limitation in the future. 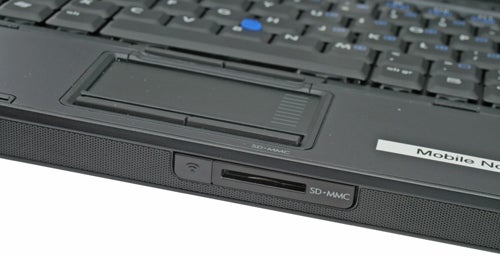 HP’s nc2400 may be lighter and sexier but with more speed, a larger screen and integrated HSDPA the bulkier nc6400 certainly has appeal.


A trackpoint and trackpad combination, fingerprint and smart card readers and integrated HSDPA 3G Broadband make the ncare all highlights on the nc6400. The screen is better suited for work rather than entertainment and there’s no Express card or Firewire, but for the business user who wants a larger screen and plenty of performance the nc6400 is a good solid notebook.