There’s an interesting sub-plot to the netbook craze that 99.9 per cent of consumers have no idea about. It all concerns market share and a battle between what we can now consider the big three of PC manufacturing: Hewlett-Packard, Dell and Acer. Acer, the challenger to HP and Dell’s hegemony, has gone into netbooks in a big way, leading the market as a result. And, though Dell and HP have made a lot of noise, they actually hold a relatively small part of this market. This is partly deliberate, large manufacturers have been wary of cannibalising sales of more profitable mainstream notebooks, but with netbooks seemingly here to stay, both have started to treat the segment a little more seriously.


HP’s answer, in the UK at least, is the HP Compaq Mini 700. Anyone familiar with HP 2133 Mini-Note PC will recognise its influence on the Mini 700, but while the former was inadvisedly targeted at business users, the Mini 700 is aimed squarely at the large swathes of netbook buying consumers – as evidenced by the use of Windows XP instead of impenetrable SUSE Linux Enterprise OS. This isn’t to say that the familiar DNA isn’t without relevance, though, with the Mini 700 inheriting the 2133’s most redeeming feature: its excellent keyboard. 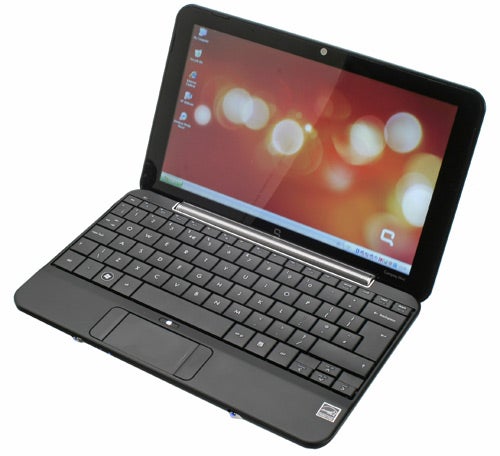 We’ll get onto that a little later, but first a few words about the Mini 700’s design. Indeed, it’s worth more than a few words, because the Mini 700 is easily the most attractive netbook going these days. We love the subtle imprint pattern on the lid, the slim and elegantly tapered chassis, the “frameless” edge-to-edge display, the funky and innovative hinge section that houses the speakers and the classiness of the silver sliding switches on the front for power and wireless radios. It’s all very simple, elegant and cohesive – words that get applied to HP products more and more these days. 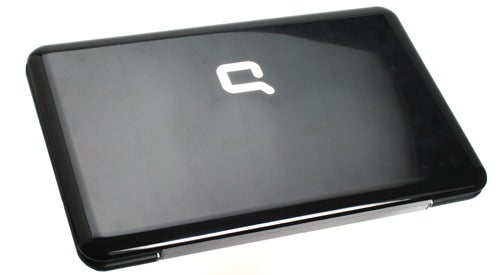 Inside, though, the Mini 700 is as steadfastly unoriginal as any other netbook. Powering it all, if that’s an apt statement, is a 1.6GHz Intel Atom N270 and though the likes of the new Asus Eee PC 1000HE and Acer Aspire One D150 boast the newer 1.66GHz N280, the difference is so small as makes no difference. For RAM there’s the usual 1GB DDR2 module, while Wireless-G Wi-Fi and Bluetooth 2.0 also make the journey. Despite its name, the Mini 700 is based on the now prerequisite 10.2in display, but its 4,200rpm 60GB hard drive is somewhat sub-par given the £300 or so asking price.

This alone might put off the hardcore netbook buyer, but we dare say that many prospective netbook buyers have no real need for a 160GB hard drive in a machine meant for occasional use. As such it comes down to a case of priorities. If you do want to store every item of media you own, music, photos, high-definition video and more, then the Mini 700 probably isn’t for you, If, however, if you intend to use your netbook as it is largely intended, as a secondary machine, then you’ll probably be okay here.

Having teased you earlier, it’s probably about time we talk about the one thing many people will be interested in: the keyboard. On the whole it has returned entirely unscathed. Its keys, which are 92 per cent full-size, are large and aren’t tapered, so there’s a large and flat surface area for you to hit. This helps reduce errors immeasurably and the basic layout is without peer. With the keyboard stretching right to the edges of the machine, there’s plenty of space for a large Enter key as well as a huge and unimpeded right-Shift key, while the cursor keys are effectively tucked away so cause no harm. 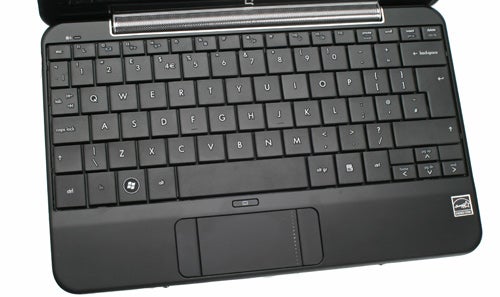 However, though the layout remains blissfully unchanged, the keys aren’t so. This isn’t a great cause for concern, though, since they remain crisp and positive, even if they lack the truly solid feel of those found on the 2133. If HP has cut costs a little, it has done so sparingly enough to not affect things too badly, making this probably the easiest netbook type on.


More shared design can be seen in the touchpad, though in this instance the likeness is less desirable since it means the touchpad buttons sit either side of the touchpad itself. This does take a little getting used to, as it did on the 2133, but there’s a larger issue here because we found the buttons impeded typing – particularly when sitting at a desk with your palms resting on the machine. This means you’re better off hovering above the keyboard and while this is largely preferable when using a small machine such as this, we’d sooner see HP design its way around the issue. 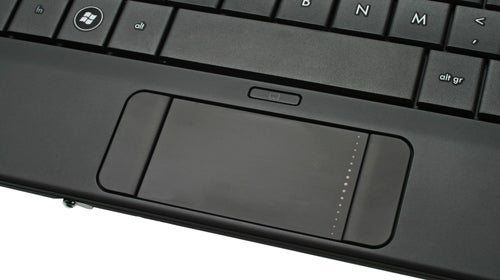 As for the touchpad itself it has a smooth, soft-touch finish that feels very luxurious; though it does have a propensity to pick up grease from your fingers, creating an ugly looking smear mark at its centre. It’s hardly a deal breaker, but if you’re sensitive to such eyesores then it’s worth bearing in mind.


Most of the above complaints are pretty trivial, but of more gravitas is the screen and its glossy finish. Fine, the frameless design is very attractive and it certainly gives the Mini 700 something other netbooks don’t have, but it’s arguably even more reflective than most other glossy displays. So much so, in fact, that in bright light it acts as a highly effective mirror. Great for picking spinach out of your teeth; not so helpful when trying to work or watch a video.

Married to this is a slight wateriness to the screen that we can only attribute to the glossy covering. It’s bright enough when turned up all the way, but colours are lacking and black levels are very washed out too. Ultimately, while it’s not dramatically worse than any other netbook display, we’d sooner see an anti-glare finish that’s more compatible with the machine’s mobile nature.

Another area where the Mini 700 splits from the norm among netbooks is its connectivity, though this is largely due to what it doesn’t have than what it adds. You only get two USB ports, rather than the usual three, while the VGA port has been replaced with a proprietary output that requires a separately sold adapter.

There’s also only a single audio port that doubles as both the microphone input and headphone output. Most of these concessions, it would appear, have been made to help maintain the machine’s slim physique and while this probably won’t bother many regular users, like the small hard drive, others are bound to disagree.


HP has also taken the common move of using a relatively low capacity three-cell, 26Watt-hour battery. It’s unusually integrated, too, with the slim battery slice being housed directly underneath the machine, not at the back. Despite this HP does make and sell, in the US at least, a six-cell battery for the Mini 1000 (essentially the same machine), so you can upgrade, but we’ve yet to see any on sale in the UK.

As for the supplied three-cell battery, it produces predictably mediocre results. Playing back a video at 50 per cent brightness with all wireless radios turned off returned two and a half hours of use; a figure that’s bound to decrease if browsing the Internet regularly. Of course, if you’re not using the Internet, you could probably squeeze out three hours – enough for most train commutes – but with the six-cell battery equipped Samsung NC10 costing around the same it’s hard to argue in favour of this HP.


This pretty much sums up the Mini 700’s problem, really. While we’d dearly love to fall head over heels for it, the excellent design and class leading keyboard (as well as the excellent build quality) come at the cost of a few too many practicalities. It will serve less demanding users very well, but then so would other netbooks costing £50 or so less, while more fully featured and considered efforts like the Samsung NC10, or the Asus Eee PC 1000HE if you need the ultimate in battery life, make a more persuasive case above the £300 mark. 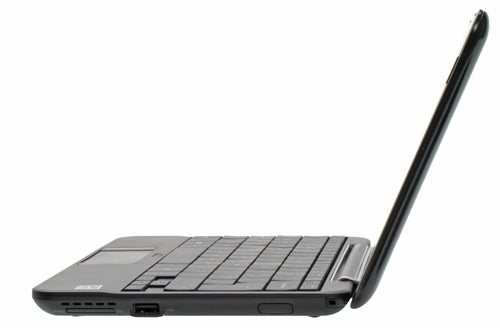 This doesn’t make the HP Compaq Mini 700 a bad netbook, but you’ll have to accept its limitations before you can enjoy its other enviable qualities.


An attractive netbook with an outstanding keyboard, the HP Compaq Mini 700 is only let down by compromises that aren’t present in similarly priced and better featured competitors. It is fine for casual use, but more demanding users will find it a little half-baked.