Much as some of us might wish otherwise, not all computers are for fun and games. Business PCs are a large and important part of the desktop market, and have a different set of requirements to those of the general home user, enthusiast or gamer. Obviously, they don’t need to be as aggressively styled or contain cutting edge components, with the most important factors, from a corporate point of view, being reliability, price and security. It’s this that makes the likes of Dell, HP and Lenovo key players, since all have the infrastructure to service large companies.


Today we’re looking at the HP Compaq dc7900 Convertible Mini Tower Business Desktop PC. This is one of the company’s high-end models and is priced accordingly at £723 excluding VAT direct from HP. However, it can be found online for £680 (£799 inc. VAT). 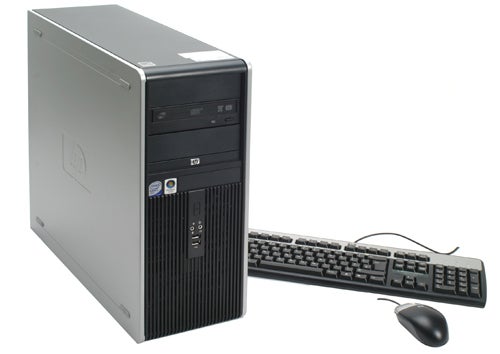 For this kind of outlay even a business PC should offer some serious hardware and the dc7900 obliges by packing an Intel Core 2 Quad Q9400 CPU with a speedy 1,333MHz front side bus and generous 6MB of cache. This is backed by 2GBs of 800MHz DDR2 RAM and a capacious 500GB hard drive, though the Intel GMA X4500 HD integrated graphics aren’t up to much. Still, this is more power than most office users will need and keeps the machine’s maximum power draw below 370W.


Inside the box you get all the usual sundries, including a power cable, keyboard and mouse, warranty sheet and a Documentation and Diagnostics DVD. No frills, but pretty much everything you’d need to get started. Indeed, nowhere is the no fills approach more evident than in the peripherals, seeing as both the mouse and keyboard are native PS2 peripherals, rather than USB. This does actually make sense when you consider that though they’re not hot-swappable, they should work reliably.

Both appear demure, sporting a slate and silver colour scheme that matches the PC, while the mouse is adequately comfortable with a symmetrical shape that’s suitable for both left and right handed use. Unfortunately, though the mouse is perfectly competent, the keyboard is a nightmare. It is, without exception, the worst keyboard I’ve ever used. The keys are uncomfortable; too small and with sharp edges, while feedback is horribly squidgy. Honestly, if you value yourself or your workers, you’ll want to send this thing straight to recycling upon arrival.

Moving onto the PC, it’s a neat tower case with silver metal sides sandwiching a black middle. As its title suggests it can be used as a minitower, or set onto its side, and the optical drive bay can be rotated to match. Only the front is made of plastic, lending the overall chassis a solid and rugged feel. For an office PC it’s quite attractive, with clean lines and the vertical air-grill at its front lending it an uncomplicated but co-ordinated look. 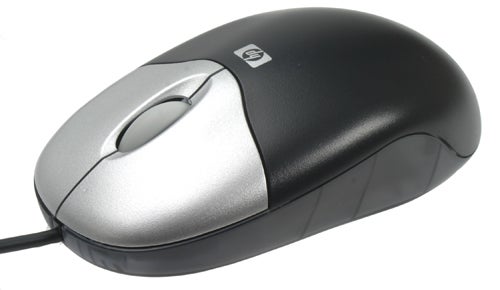 At its front are two free 5.25in drive bays, with the third taken up by a LightScribe DVD-writer. LightScribe technology, which allows you to ‘burn’ black and white images or text directly onto compatible optical media, is always a nice feature, but especially so on an office machine where other people might not be able to read your hand-written CD labels or you might want to give a more professional presentation.


There’s also a single free 3.5in bay, which if you’re buying direct from HP can be fitted with a 1.44MB floppy disk drive (yes, some office environments still use them) or more usefully for most, a 16-in-1 Media Card reader. Below this, in a panel set into the grill, you’ll find a flush power button, headphone and microphone jacks and twin USB ports oriented horizontally. 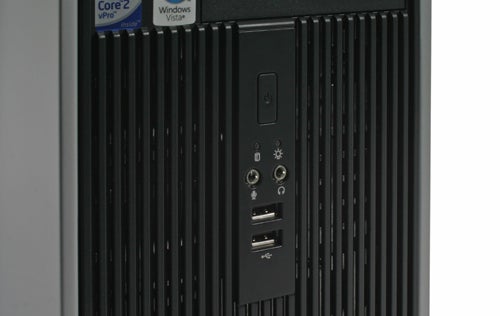 At the PC’s back is a slightly surprising connectivity selection. Six USB 2.0 ports are fairly standard, as is the single Ethernet port and 3.5mm audio in and out jacks. Legacy devices are taken care of by the two PS2 ports for mouse and keyboard, with a serial port rounding things out nicely. This is all fairly straight forward, but the surprise comes with the video connections, of which there are two: VGA and DisplayPort!


As you may or may not know, DisplayPort is a touted as a replacement for VGA & DVI which besides being royalty-free also offers more bandwith for higher resolutions. However, it’s an odd choice for the only digital video connection on a business PC. Since most monitors on the planet don’t natively support DisplayPort, DVI would make a lot more sense and should at least be present as an alternative. 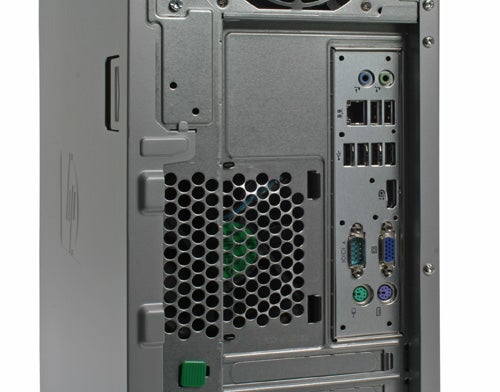 HP further compounds this by not including any video cables or adapters, meaning that in most cases, you’re either stuck using analogue or need to buy expensive cables/adapters. To top it all off, these don’t seem to be available from HP itself. Now I know a lot of businesses still use analogue, but nevertheless this is a negative for the more progressive ones.

Fortunately it’s mostly good news from here on out. Despite using a 92mm fan at the back rather than the quieter 120mm ones found on many cases, the dc7900 runs very quietly; in fact it’s practically inaudible when its drives aren’t spinning up. Of course this is partially due to the only other active cooling in the PC being the PSU and custom CPU cooler, since the motherboard and graphics are passively cooled.


This arrangement keeps the PC nicely cool and the CPU cooler is very impressive for a business machine. It’s a massive metal construction with fins and heatpipes, sporting a plastic shroud with a fan at a 90 degree angle that draws air in from the case’s front grill. 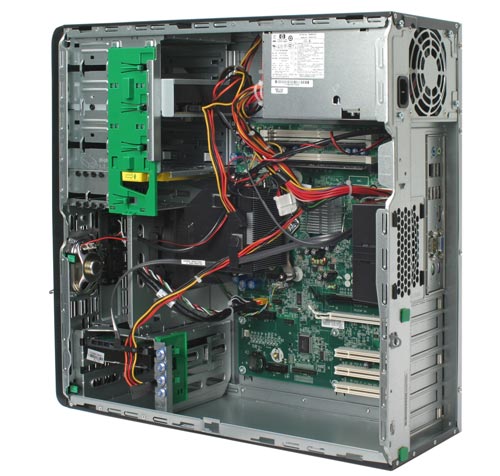 As far as the rest of the internals go, obviously it’s a bit barren compared to the usual monsters we get through, which are often crammed full of the latest technology. Two RAM slots are taken up with twin 1GB sticks of DDR2 leaving two free and two of the motherboard’s four SATA ports are used by the DVD-writer and hard drive. Apart from this all the slots are free, including two full-size and one mini PCI-Express 2.0 ones, plus three standard PCI slots that are likely to come in handy on any business PC.


Further in keeping with the ‘convertible’ (i.e. upgradeable and multiple orientation) theme, cable routing is a bit messy thanks in part to spare power connectors for extra drives being left free and ready to plug in. Installation of drives and cards is also largely tool-free. As a last bonus, the case is incredibly easy to open, with pulling a simple lever all that’s required to remove the right side panel. 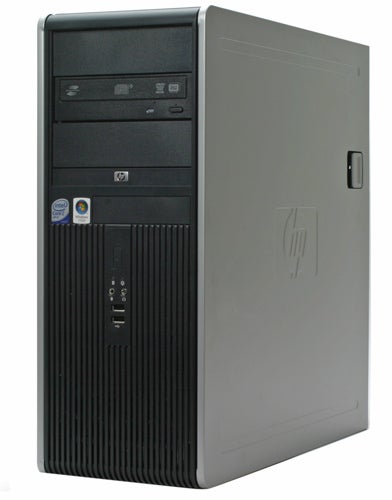 It’s worth noting an integrated mono speaker, which produces barely bearable audio. While the utility of a speaker in an office machine is debatable, it does save space not needing external ones for the occasional YouTube video during lunch.


Interestingly, on the software side of things the dc7900 comes with a Windows Vista Business license, but also with a downgrade to Windows XP Professional custom installed. Much as Microsoft might push its latest OS, especially in a business environment XP simply makes more sense. It has better stability, a higher rate of compatibility with older programs and external devices, not to mention being more integrated into most corporate support networks. HP also provides a trial version of the most extensive and up-to-date office suite available; Microsoft Office 2007. The only niggle here is that this version might cause compatibility issues with older office formats, but there are compatibility packs available from Microsoft for everything down to Office 2000.

In terms of applications, you get InterVideo’s WinDVD and a trial version of McAfee’s Security Suite 2008, as well as several custom HP apps. HP Backup and Recovery is fairly self-explanatory, and offers scheduled backups in addition to custom HP Recovery partitions. HP ProtectTools Security Manager gives you central access to a large range of incredibly useful features for an office PC, such as device access management, smart card security and all kinds of privacy options including drive encryption.


This software security is further enhanced by an integrated TPM 1.2 (Trusted Platform Module) Embedded Security Chip. This hardware chip uses a silicon-embedded root key to enhance security through hardware encryption and authentication on TPM-enabled corporate networks. Aside from the common Kensington Lock Slot, there’s also a hardware ‘lock ring’ for a padlock to prevent component theft. 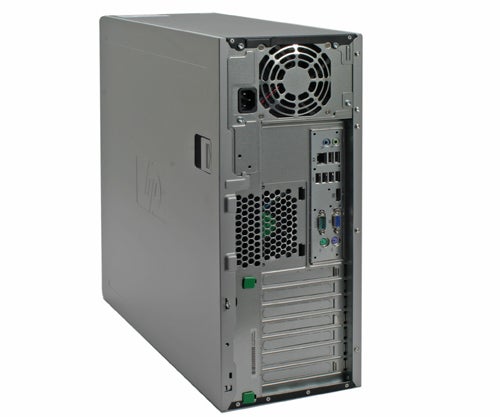 Overall, while £680 might seem very steep for the hardware you’re getting, you do get a well-built machine with a lot of extras. These include TPM and decent security management software and a three-year limited warranty backed by the biggest player in the PC industry. It’s just a shame that the decision to go exclusively with DisplayPort, as opposed to DVI, means you’ll have to rely on VGA for legacy components. 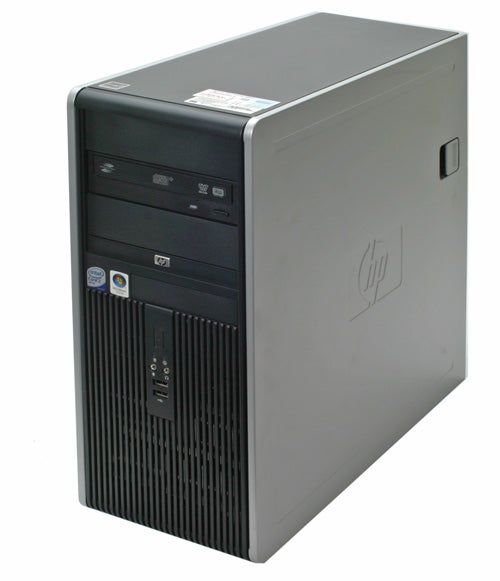 
HP has produced a well made and flexible office desktop that offers good performance and security options, including a Trusted Platform Module. This makes it a worthy contender for your cash, though the lack of DVI in favour of DisplayPort is a factor that must be considered carefully. If you’re already migrating to DisplayPort, or are happy to use VGA, then it’s less of a problem, but if you’re still wedded to DVI then this might not be for you.