Here at TrustedReviews we tend to focus on the consumer and small/home business side of the IT industry. However, every now and then we like to dip our toes into the murky waters of enterprise computing to see what it has to offer.


Today we have the dc7700p from HP in our labs and, aside from being a small business desktop, it has one very interesting feature we’ve not had a look at before. It’s called Intel vPro Technology and it’s something that could revolutionise the IT support industry. 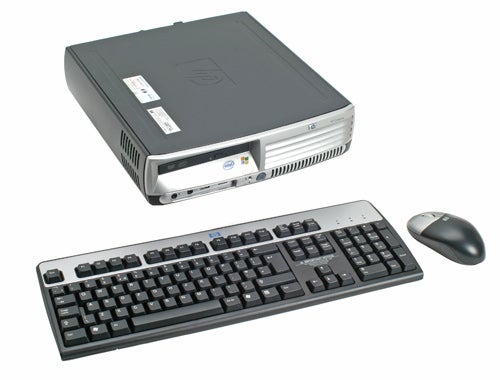 
Intel AMT integrates a management engine into the motherboards chipset. Locally, it can monitor activity, taking any appropriate remediation action if problems arise. Remotely, it allows external systems to communicate directly with hardware, bypassing the need for a local software based management agent to be running. In short, IT departments no longer need to wait for a PC to boot up, and load a software management agent, to be able to perform remote diagnosis and recovery actions, reducing the number of site visits required.


Intel VT is a lightweight virtualisation machine (VM) that provides an extra level of security for the system. A VM is essentially a small program that, on the one side, interfaces with the computer’s hardware and, on the other, presents itself to the user’s Operating System (OS) as that hardware – thus creating a virtual computer. Within the VM you can embed other programs like firewalls or spam filters. Information can then be filtered before it enters or leaves the OS, greatly reducing the risk of threats proliferating throughout a network.


As someone that’s worked in IT support for a number of years, I can instantly see the benefits of these technologies. Just the ability to administer to a PC at anytime regardless of its state would save countless emails, phone calls, and, site visits and greatly increase the efficiency of support operations. 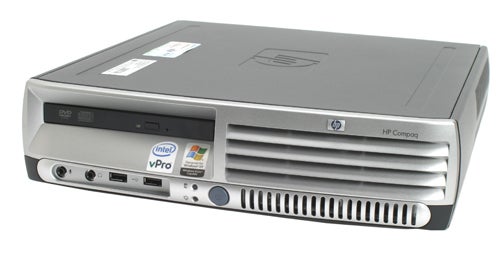 Intel has collaborated with a number of system providers including HP, Siemens and EDS to supply vPro certified hardware. Notable by its absence, however, is Dell who has chosen not to implement a vPro based solution. It wants Intel to use an open standard so that AMD based systems can also be vPro certified. After its long association with Intel this is quite a surprising stance for Dell to have taken. Anyway, I digress.


The dc7700p, then, is the ultra-slim desktop version of HPs flagship 7000 range of PCs. Configuration options include the choice of dual-core Pentium D or Core 2 Duo CPUs, 80 or 160 GB hard drives, 512 MB or 1GB RAM, and Intel integrated or ATI X1300 graphics. All systems use Intel’s Q965 chipset. The system I’m looking at is based on a Core 2 Duo E6300, has 1GB RAM, and uses Intel integrated graphics. Also included in the bundle are a keyboard and mouse.

The chassis is a plain sturdy steel affair and is designed to be stackable for efficient storage on IT department shelves. The steel work is finished in a tough black paint that should stand the test of time. My only complaint about the case would be the less than appealing front panel, which is totally inelegant. There’s not a complementary line anywhere on it. Why ‘business’ always has to equal ‘style free’, I’ll never know. 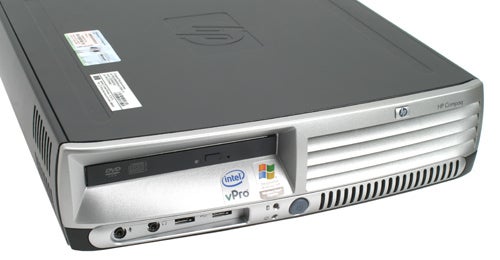 Being a slim-line device, HP has chosen to forgo the inclusion of a floppy drive instead relying on a plethora of USB ports, which can be combined with the now ubiquitous USB memory stick, to provide removable storage. Two of the USB ports are on the front panel, along with microphone and headphone sockets. The remaining six USB ports are on the back panel. Here you’ll also find audio line in and line out jack sockets, a VGA D-SUB connection – no DVI here, a single gigabit Ethernet port and PS2 connections for the mouse and keyboard. The lack of DVI is disappointing but understandable considering the infrequency with which IT departments tend to upgrade monitors.


As you would expect things are pretty cramped inside. However, everything is very neat and build quality is excellent with no sharp edges or loose components. There is room for one expansion card – by way of an optional riser, which can be either a full size PCI or low profile PCI-E card. Memory can be expanded using a third memory slot, however, you will have to sacrifice running in dual-channel mode to do this. Aside from these options you’ll have to swap out components if you want to upgrade.

Thermal design seems well thought out with a direct flow of air from the front grille over the CPU, memory, and expansion cards and out the back of the case. During benchmarking the case became only slightly warm and the PC was totally stable. Noise was also kept to a minimum despite the use of small 50 and 60 mm fans.


The included keyboard is nothing special but is pleasant enough. Key response is a very subjective thing but I can’t see anyone having complaints here. Knowing that some business PCs still ship with ball mice, I was glad to see HP had included an optical one. It tracked well for general office work and the buttons were all nice and responsive. 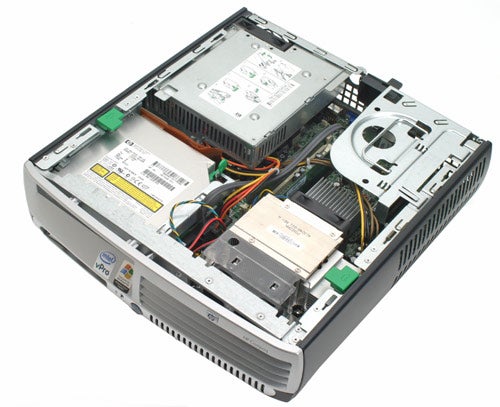 However, both the keyboard and mouse are flimsy and it wouldn’t surprise me if they began to fail after six months. This is common with business PCs – the logic being that office workers aren’t looking for the best of the best – but this a severe oversight that I really wish these companies would put a stop to. If you want to increase productivity the first port of call should be to provide your workers with comfortable, durable, easy-to-use peripherals. In fairness, though, this is more of an issue with IT bosses than the manufacturers.

The PC ships with HP ProtectTools security solution and HP OpenView Inventory Agent preloaded. To use ProtectTools you must enable the embedded security chip through the BIOS. Once activated the chip enables ProtectTools to access the full breadth of HP security capabilities. OpenView must be installed via a command line prompt. For this to work you require various settings from your Client Configuration Management Server.


Both these programs, and indeed the whole vPro concept, are enterprise level solutions that require full server/client setups that are simply beyond the scope of our labs. Also, clients are likely to install a completely custom configuration as soon as they receive these systems so testing the review sample software is of limited use. All we can say is that the vPro capabilities are there and move on to how the system stacks up according to our usual criteria. 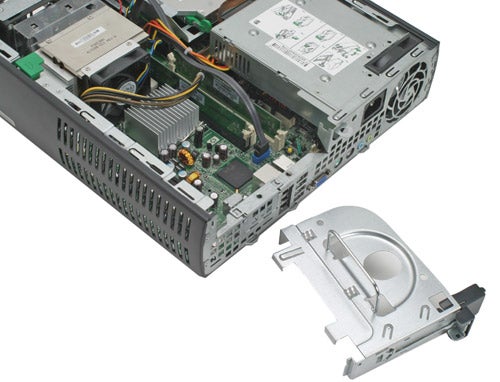 I tested the PC using SYSMark 2004 SE, our in-house 2D test suite, and PCMark05. I decided to forgo 3D performance testing because, without an additional graphics card, this machine would almost never be used for 3D applications and certainly wouldn’t be used for gaming. For comparison I’ve used the Dell XPS 700 which is based on an E6700, and our reference E6400 based system.


For a full explanation of our in-house 2D testing methodology please refer to our recent review of the Evesham Solar Extreme where Spode covered it in detail. SYSmark and PCMark are run with default settings on a clean install of windows.


In single tasks the dc7700p is consistently out performed by the other two systems. However, it still puts in a solid performance in line with what you would expect from the slower CPU.


Being a system that’s designed to run in enterprise environments where you are likely to have multiple tasks running in the background (like anti-virus monitoring agents) it is good to see the dc7700p cope well with our multi-tasking tests. Again it is bettered by the higher end systems but would still be a very usable system for everyday office work.

In terms of pricing, opting for a system with vPro will add around £100 to the price. Whether you consider this price worth paying will depend entirely on your needs but spreading the cost, over the three to five years the machine is likely to be in use for, would suggest it is worthwhile.


The benefits of the vPro system are clear with the potential to greatly increase desktop support efficiency and save businesses money in the long run. Combined with good overall performance the dc7700p is a great enterprise level desktop.