With the notable exception of the Dell Latitude E6400, business notebooks tend to be slightly boring. Unlike consumer notebooks, the emphasis is on substance over style – which is of course is a good thing, just not very exciting. However, when you’re getting the notebook for a ‘small’ monthly addition to your ‘unlimited’ 3G data contract, things definitely appear to be looking up. Let’s find out if Orange’s Business Everywhere plan and the HP Compaq 6730b business notebook make for the ideal combination. 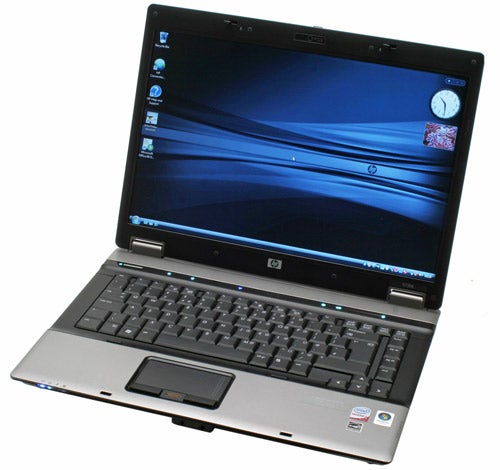 Starting off with the hardware, HP Compaq’s 6730b hides moderate specifications under a typically unassuming exterior. A plain silver, square-edged lid is held closed by a single clasp with two catches, contrasting against the black base of the machine and giving it the understated appearance most business machines aspire to.


Opening the machine delivers no further eye candy; this is not a notebook that will be drawing envious eyes. At least it hasn’t been hit with a branch from the ugly tree either, maintaining a combination of matte black and striped silver. Of course one major advantage to this matte overall finish is that it won’t display every single fingerprint, scratch and dust-mote, so should retain a tidy exterior through several years of use. 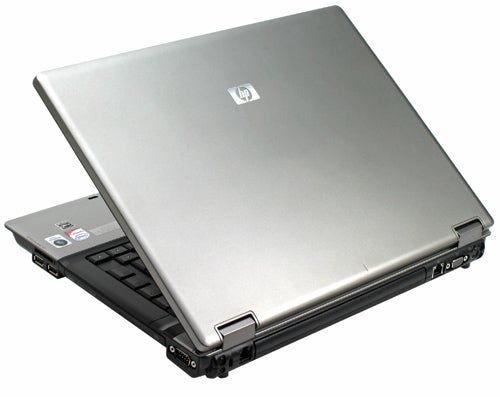 Surrounding the 15.4in screen is a black bezel with the obligatory webcam integrated into a small glossy section. There are multimedia controls integrated into a narrow glossy black strip above the keyboard, which matches the touchpad’s similarly shiny surround. On the left side of this strip is the power button and LED indicators for wireless, hard drive activity and such – these are also replicated on the notebook’s front edge. To the right are touch-sensitive volume controls. Thankfully these don’t beep while you’re making adjustments, but they are a prime example of why some people dislike touch controls, being fiddly and extremely unresponsive.


Fortunately the spill-resistant keyboard is a lot better, though not quite up there with Thinkpads or even the better Dells. Keys are slightly textured, so your fingers will never slip, and though key travel is rather shallow the response is nonetheless positive, with a light click never leaving you in doubt as to whether you’ve pressed a key. Its layout, meanwhile, can’t be faulted in any meaningful way.


Though there is no trackpoint, as can be found on many business notebooks at least the 6730b’s touchpad is excellent. It’s just the right size and slightly recessed, making it very comfortable to use, with a smooth and pleasant surface. Buttons located to either side of the included fingerprint scanner are not only ideally shaped and very responsive, but also raised to make them easier to use than most. 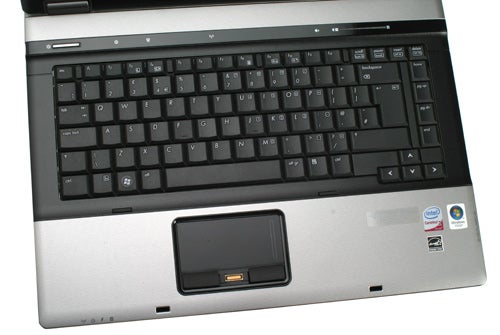 Were the 6730b a multimedia notebook the connectivity on offer would be woefully inadequate, but it is perfectly suited to the business world. Hence we have VGA and S-Video joining Ethernet and modem ports on the back, together with a Kensington lock slot. On the left is the power jack, two USB ports spaced nicely apart to fit even the fattest memory sticks side-by-side and a mini-FireWire port. Beside these is the 54mm ExpressCard slot. At the front are headphone and microphone jacks nestled in the centre of a large though subtle speaker grille, while the right houses another two USB ports, a memory card reader and a serial port that will please those who use legacy devices out in the field. There is also an upgrade bay, which by default contains the DVD-Rewriter but can also be used for a second hard drive.

In use, the HP Compaq 6730b stays nicely cool and only produces a minimum of noise. And, while its plastic construction obviously isn’t going to match metal-clad models like the aforementioned Latitude E6400 for build quality, it’s nevertheless quite sturdy.

Many of the weaknesses that traditionally affect notebook panels, such as poor black levels, are not that much of an issue for a business machine but, having said this, the 6730b’s screen is deeply average. Viewing angles aren’t bad enough to ‘enhance privacy’ but do suffer from severe contrast and colour shift. It also suffers from some banding and backlight bleed from the bottom edge. However, greyscale performance is fine and text is sharp and legible.


The notebook’s speakers, meanwhile, are better than those found on many business machines. That’s not high praise, mind you, but while things do come across rather tinny, they produce decent volume levels without distorting. This combined with the screen’s half-decent contrast means the HP Compaq 6730b isn’t too adverse to the occasional film or other light entertainment, while the speakers could be utilised for any audio required in a presentation.

Getting onto the internals, there’s not too much power under the hood, but it’s plenty for most business users. A 45nm Intel Core 2 Duo P8400 running at 2.26GHz on a 1,066MHz FSB makes for a cool and power-efficient processor, especially when combined with the Series 4 Express chipset and integrated Intel GMA 4500M HD graphics. This is backed by 2GB of 800MHz DDR2 RAM in two DIMMS, which while not exactly generous should be enough to keep the installed Windows Vista Business 32-bit happy in most scenarios.

For storage, finally, there is a modest Fujitsu 160GB 5,400rpm model protected by HP’s 3D DriveGuard. 3D DriveGuard is a combination of shock-dampening material and a magnesium drive cage with an accelerometer (a type of digital motion-sensor) which parks the drive-head when it senses a drop. The accelerometer’s sensitivity is even throttled depending on whether the notebook is open or closed, all of which provides as much protection as possible for a moving-parts drive.

Battery life is another strong point of the 6730b. Using the standard six-cell battery, as opposed to the optional eight-cell offering, it managed a very respectable four hours and forty-four minutes in the non-intensive Reader Test. And, as you can see in the battery benchmarks , it came pretty close to the Dell Latitude E6400 and Fujitsu-Siemens Esprimo U9210, both of which utilise smaller 14.1 and 12.1in screens respectively.

As you’d expect from a business notebook no sacrifices have been made on the security or wireless fronts. For security there is an embedded Trusted Platform Module (TPM) security chip and aforementioned fingerprint scanner, joined by a whole host of software such as Drive Encryption and Credential Manager for HP ProtectTools, and HP Disk Sanitizer to delete that sensitive data. Meanwhile, Wi-Fi up to Draft-n joins Bluetooth and of course the star performer, the integrated 7.2mbps mobile broadband module to provide all the cordless computing you could want. 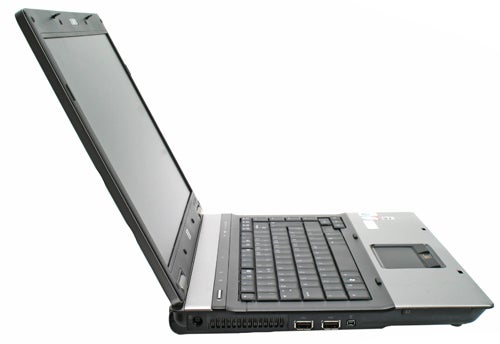 And this, of course, is where things get really interesting, since the HP Compaq 6730b is available on Orange’s mobile Business Everywhere plan, which offers 500 free Wi-Fi minutes and ‘unlimited’ data (subject to a 5GB fair use policy) per month. Business Everywhere deals with a bundled notebook start at £35 a month, which gets you a 6735s AMD Sempron machine and external 3G dongle. To get the 6730b with integrated mobile broadband that we’re looking at though, you’ll have to tie yourself into a 24 month contract of £45 a month that’ll cost you £1,080 over the period of the contract.


Initially this might sound expensive, but when you consider you’re getting a notebook that’s generally around £720 (£626 excl. VAT) ”without” built-in 3G or the two year extended HP warranty if bought separately it doesn’t seem such bad value. Of course you could go one down to the HP Compaq 6730s, which not only has better specifications (such as a discrete ATI Mobility Radeon HD 3430), but also an external dongle that will be usable on any device including future notebook upgrades and knock £5 off the monthly tariff. However, though it comes with the same software, it lacks the specialist business features such as the 6730b’s fingerprint scanner, TPM and 3D DriveGuard.

Compared to Orange’s Business Everywhere plan on its own, which over 24 months will cost you £17 for the same ‘unlimited’ usage and 250 Wi-Fi minutes (total cost = £408), you’re essentially paying £672 extra over the entire contract period for the notebook and extra 6000 (250 per month) minutes ‘HotSpot’ time. Whether you use the extra time or not, that’s a saving of around £50 on the 6730b, plus you’re getting 3G built-in, which can easily add another £100 or more to the price of any notebook.


As ever with bundles, it’s not an offer suitable for everyone, especially when other providers like O2 and 3 have some very tempting business mobile broadband offers right now. 3, for example, currently has an 18 month 5GB plan for a mere £6.38 per month, though this doesn’t include Wi-Fi hotspot access or a 3G modem. O2, meanwhile, offers a 24-month plan with 3GB limit and unlimited Wi-Fi for only £12.77 with a 3G modem. 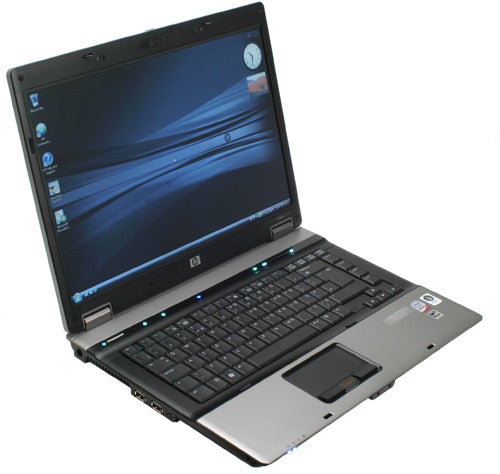 
Orange’s Business Everywhere mobile broadband plan partnered to HP Compaq’s 6730b with integrated 3G/HSDPA makes for an interesting and relatively good-value combo for any business user that needs to stay connected wherever they are. As with most bundles though, it’s not for everyone, and you’ll need to check carefully if this combination is what your business needs.