With a few notable exceptions like the Dell Latitude E4200, business notebooks tend to be a bit on the plain side compared to their consumer counterparts. While HP’s latest 12.1in 2230s business notebook doesn’t stray too far from this ethos, it does add a few glossy bits and more importantly, some connectivity you might not expect from a business machine. 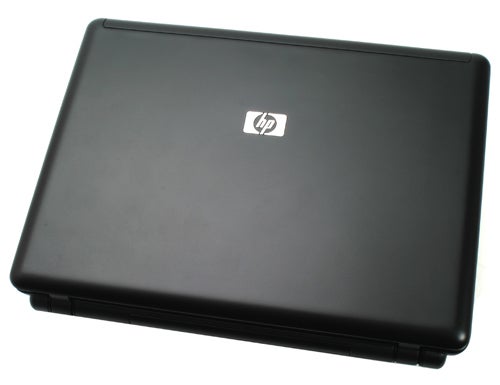 Outside, the 2230s does look quite plain but the black finish used is only semi-matte, striking the ideal balance between avoiding fingerprints and not looking too dull. An embossed silver HP logo certainly does nothing to detract from its simple appeal, either.


Opening the notebook up, there are further consumerist touches, with a piano black bezel around the screen. Fortunately, the palm rests, keyboard and touchpad are all matte, with the only other glossy sections being a thin strip around the keyboard, the power button, the touch-sensitive media controls and the touchpad’s buttons. 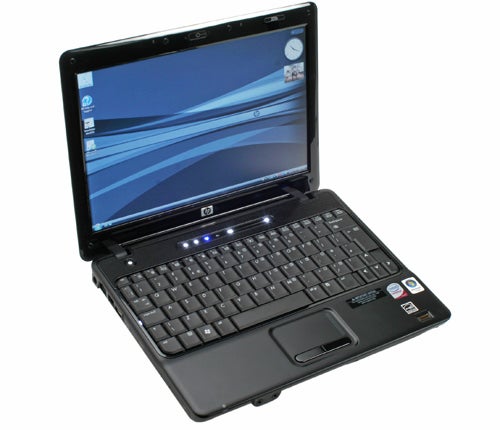 Overall, the 2230s is attractive and mostly practical, but there are some concessions to cost in the build of the machine. That’s not to say that the 2230s is weak or flimsy, but the plastics used don’t feel as solid as we’re used to with business machines.


Above the keyboard, the power button is backlit in white and together with the touch-sensitive media controls is set into a black metal speaker grille which runs along the entire width of the keyboard. The touch-sensitive controls are fairly accurate, turning from white to orange to indicate status changes.

The first one of these calls up HP Info Centre, which brings up a handy panel that accesses HP’s 3D DriveGuard (a technology to protect the drive which I’ll explain later) Help and Support, HP ProtectTools Security Manager, Software Setup, Wireless Assistant and User Guide. Next to this is are shortcuts for presentation settings and wireless, and last of all volume controls. Overall, it’s a genuinely useful selection for many business users.


As one would expect from the company that designed what is still the best netbook keyboard on the market, the 2230s’ keyboard is very good. Though feedback is on the shallow side it’s still well-defined, while the broad matte keys are very comfortable. Layout is logical, with the only minor complaint being that the secondary icons on the F1-F12 keys can be a little difficult to make out. 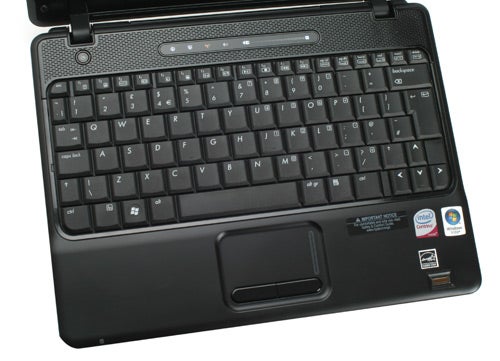 Moving down to the recessed Synaptics touchpad, its surface (which is the same as the palm-rests) is pleasant: smooth but not slippery. As mentioned before, the two buttons are glossy, but though they do pick up fingerprints easily these are only visible from a very limited angle. Their feedback is good, though if we’re being picky they do go down a bit far for ideal comfort.

Design isn’t the only area where the 2230s has more in common with a consumer than a business notebook. There’s no sign of any legacy ports and unusually we find HDMI included among the video outputs. Those who might wish to occasionally hook up their laptop to a TV will be delighted to hear this, and even in many business environments things are moving ever so slowly to digital.


Worry not if you’re still stuck with VGA though, as a D-sub port joins the HDMI one on the notebook’s right. Also on this side we find the lock slot, two USB ports, an SD/MMC memory card reader and 34mm ExpressCard slot.

There are no connections on the back, while the front houses only headphone and microphone jacks, beside a small hard drive activity indicator that’s visible with the notebook closed. Finally to the right we have Ethernet and modem ports, the power connector, a single USB port and the LightScribe DVD-rewriter.


In an interesting touch HP has placed a small indicator light by the power socket, which like the rest of the 2230s’ lighting switches between white and orange, but its utility is limited by having to look around the side to see it – where it’s still nearly hidden by the actual power plug.

Getting to the HP Compaq 2230s’ innards, things are headed up by an Intel Core 2 Duo T5870 processor running at 2.00GHz. This 65nm CPU has 2MB of cache and an 800MHz front side bus speed and is certainly fast enough for any business applications. It’s backed up by 2GB of 800MHz DDR2 memory, which again is plenty for most business users and should keep the included version of Windows Vista Business happy. Since one DIMM-slot is left free, it can also always be upgraded with another 2GB module at a later date. Another nice detail worth mention is that HP offers a downgrade to Windows XP Professional on certain configurations, though only when buying direct.

Storage is handled by a 160GB hard drive and it is protected by HP’s 3D DriveGuard technology. For those who haven’t read the explanation of what that entails in my earlier review of the HP Compaq 6730b, 3D DriveGuard is a combination of shock-dampening material and a magnesium drive cage with an accelerometer, which parks the drive-head when it senses a drop. Its sensitivity is even throttled depending on whether the notebook is open or closed, all of which provides as much protection as possible for a mechanical drive.

Within the 2230s range, you can get up to a 2.1GHz T6570 CPU, 4GB of RAM and 320GB hard drive, though everything else aside from the OS remains the same. Graphics power is not very important on a business notebook, thus the bog-standard Intel integrated GMA 4500HD graphics are perfectly adequate.


Things pick up nicely when it comes to wireless connectivity though, with Draft-N and Bluetooth 2.0. Gigabit Ethernet is also on hand. Aside from a fingerprint reader on the right palm-rest, the other business features are all software-based.

Of course, screen performance is not as important on a business machine as on a multimedia one, but nonetheless prospective owners will be glad to hear that the 2230s’ 12.1in 1,280 x 800 screen (with the inevitable webcam above it) will handle the occasional film well. Some dithering leads to the occasional bit of ‘noise’ over certain shades and contrast shift has a noticeable impact on greyscale performance when deviating from the ‘ideal’ viewing angle. But aside from slightly uneven backlighting, there is little else to complain about, with razor-sharp text production proving to be the highlight. 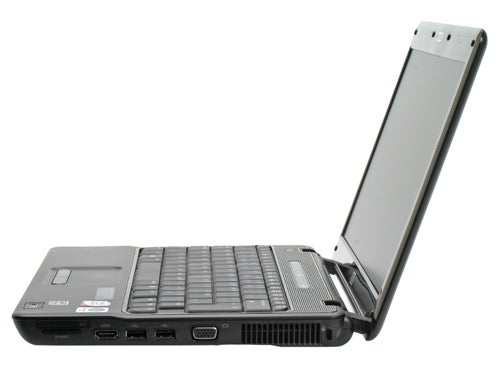 Audio is not as pleasing, however. The 2230s’ speakers put out more volume than most business notebooks, but everything comes across very muddled, lacking the crispness and tonal distinction that even most notebook speakers manage to produce on the treble end of things.


It’s the battery life, though, that’s the single biggest disappointment. A four-cell (37 Watt-hour) battery does help to keep the notebook’s weight down to a very reasonable 1.8kg, but to put things in perspective that is the kind of battery capacity one expects to find on a cheap netbook! This is reflected in the 2230s’ very poor two hours and 20 minutes Reader test result; less than half of the five hours and 22 minutes managed by the 12.1in Samsung Q210. Though a higher-capacity eight-cell battery is available from HP, this will set you back another £93 (£81 ex. VAT). 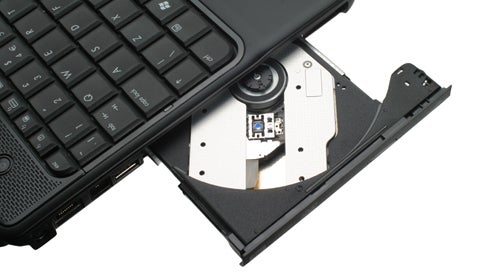 This brings us nicely to the value assessment. Though quite expensive direct from HP direct, the configuration we’ve reviewed is generally available around the £560 (including VAT) mark, with some stores charging even less. If you don’t need longer battery life than the HP Compaq 2230s provides, that’s reasonable value for money. 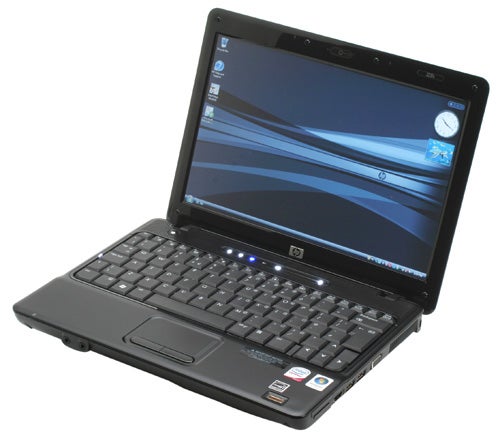 Comparing it with the Samsung P210 (the business version of the Q210), which costs around the same, you get a better six-cell battery but also miss out on many of the 2230s’ business-specific features like a fingerprint scanner, HP’s 3D DriveGuard and the company’s specialized software such as Security Manager and Drive Encrypt.


What HP seems to have done is taken a consumer notebook, given it a matte lid and 3D DriveGuard and rebranded it as a business machine. And for such an affordable option, there’s little wrong with this approach. In fact, it wouldn’t make too bad a personal notebook for those looking for some extra security. It’s only really let down by its poor battery life, though that can be remedied by purchasing a separate eight-cell battery.