Colour laser printers used to be the exclusive province of business offices, but several companies are determined to move these machines into the home market, too. To do this, the initial purchase price has come down and £150 is the current sweet spot. HP’s Color LaserJet CP1515n is a little bit over this at Internet prices, but offers PCL, Postscript and network support, while still scraping in under £170.


You’d be forgiven for mistaking this printer for the Color LaserJet CP1215, reviewed a few weeks back, as physically it’s nearly identical. About the size of a workgroup mono laser, it’s quite a big machine, but relatively narrow and low off the desk. A large radius curve at the front reduces its otherwise boxy appearance, as does the colour scheme, in three shades of grey. 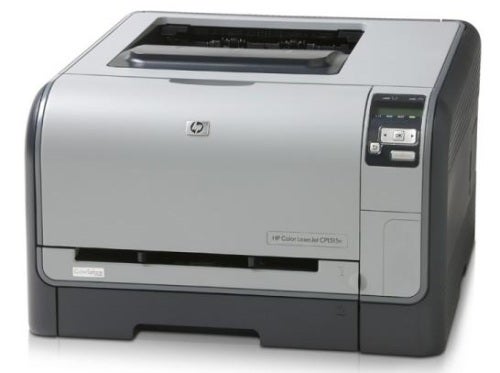 The control panel is set into the front curve and includes two bright LED indicators, as well as five buttons and a 2-line by 16-character LCD display, which is difficult to read because of reflections from its curved, clear-plastic cover and its deep set position. A backlight would make a big difference.


The home or possibly SOHO market for this printer is emphasised by the 150-sheet paper tray at the bottom of its front panel. There are plenty of inkjet machines at this price with larger capacity trays and you’re likely to be refilling this one regularly. There’s a single-sheet multipurpose slot directly above the tray and HP’s curious flip-up panel, intended to provide access to paper jams. At the rear are sockets for USB and Ethernet. 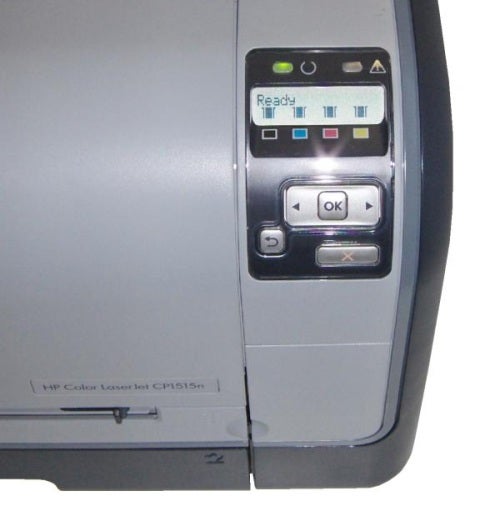 Installation is pretty straightforward, as the combined drum and toner cartridges are provided in situ, in a tray which slides out from the front of the machine, giving very easy access to the consumables. Protective tapes have to be pulled out from each cartridge before you start using the machine, but this is the work of moments.


Unlike the cheaper Color LaserJet CP1215, this machine doesn’t use a host-based driver, so can be coupled up to a PC or a Mac and run as either a PCL or Postscript device, making it much more versatile. HP makes no specific mention of Linux drivers, though they are available for most of its machines.

The Color LaserJet CP1515n is claimed to print 12 black pages per minute or eight in colour and, while this is still a little optimistic, it’s not as much of an exaggeration as with many printers in this price range. Our five-page text print finished in 52 seconds, giving a real-world speed of 5.77ppm, but when we increased the print run to 20 pages, the speed also climbed, to 9.52ppm.


These speeds are reasonable, but still a way short of some of the machine’s competitors, such as the £125 Xerox 6125. For comparison, this printer produced a top mono speed of 10.52ppm and a colour speed of 8.11ppm. 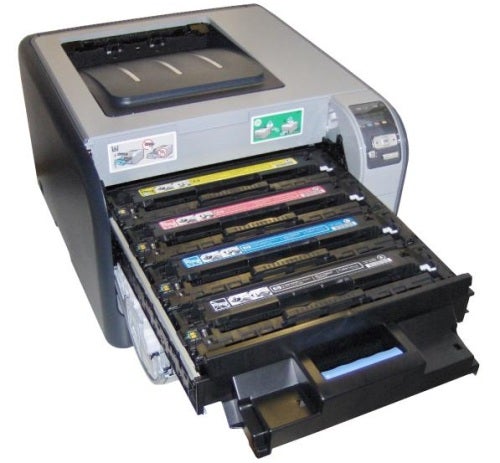 The print quality of the CP1515n depends on what you’re printing. Black text print is very good, with clean, dense characters at the machine’s default resolution of 600dpi. There’s no sign of toner spatter and characters are well formed at all point sizes.


Colour graphics are also very vivid and bright, ideal for attention-grabbing charts and graphs and with excellent black text registration over coloured backgrounds. The only place where this output is let down is in reproducing photographs, never a laser’s strong-point.


The colour gamut from this machine, even though it uses HP’s patented ColorSphere toner, is smaller than from some other lasers and from nearly all inkjets we can think of. It produces an over-vivid rendition, with a ‘seaside postcard’ effect, which detracts from photos of landscapes. There’s also loss of detail in darker areas of images and colour transitions, such as in blue skies, are not as smooth as they should be.


The running costs in this machine are the four drum and toner cartridges and these cost around £50 each. For this you get 2,200 ISO black pages and 1,400 colour ones. This gives a cost per page of 3.02p for black and 13.91p for colour. Again, comparing with the Xerox 6125, the HP machine produces an almost identical mono page cost, but betters the Xerox by nearly a penny per page on colour.


There are several aspects of the HP Color LaserJet CP1515n that are very likeable. It’s easy to maintain, produces excellent black text and good colour graphics and is competitive in its running costs. Against this, it’s a little slow, has a low capacity paper tray and a hard-to-read LCD display. On balance, it’s a worthwhile contender, but do look at the competition, too.