HP, the father and mother of laser printing, still owns the lion’s share of the market. The Color LaserJet 3550 sits in the middle of the company’s small workgroup colour laser offerings and is designed to provide day-to-day colour printing for small businesses or workgroups.


This is a pretty massive printer, weighing in at 32.5kg, so it’s generally a two-person lift. It’s also physically big, given that it only takes A4 sheets, and its peculiar, curved bread-bin shape makes it look a bit like an old Gestetner duplicator. Surprisingly, given its size, it only has a 250-sheet paper tray, positioned under the machine, though there is a fold-out multi-purpose tray which can take another 100 sheets. An optional 500-sheet tray can be fitted under the machine. 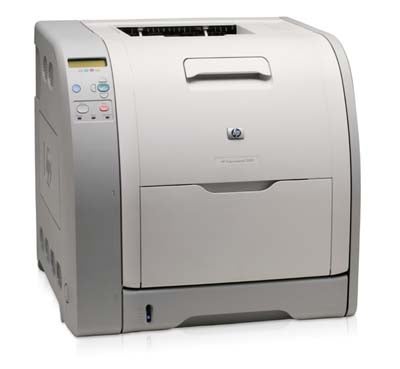 Set into the rounded top cover of the printer is a six button control panel including a useful Cancel button which can interrupt a printing job, if needed. There’s also a two line, 16 character display panel, though it unfortunately has no backlight.


It’s daft not to illuminate this display, as the cost of fitting a backlight is so low and without it, even under good overhead lighting, messages are hard to read. And that’s a shame, as the messages are better than many provided on laser printers.


For one thing, the 3550 shows the name of any file being processed or printed, a useful feature if you’re sharing the printer in a workgroup – and most will be. The menu system, should you need to control the printer directly, is easy to use and the function of the tick button will be familiar to any Excel user. 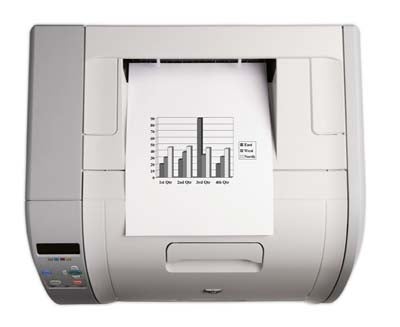 At the back of the 3550 is a single USB 2.0 port – the only way of connecting this printer to the outside world. There’s a networked version of this machine, the Color LaserJet 3550n, available for an extra £70 or so and this is well worth the extra if you intend to share the machine as a standalone resource.


This is a linear colour laser, meaning the four coloured toners are built up on the paper in a single pass, rather than in the four passes that a carousel mechanism takes. When you fold down the front of the machine, you gain access to four slots, each of which takes a toner cartridge, complete with developer drum. They slide in easily and are the only consumables you need to deal with. This integrated approach makes the physical set up and maintenance of the Color LaserJet 3550 extremely simple.

The Windows printer driver offers all the usual features, such as multi-page per sheet prints, watermarks and overprints. Resolution is set automatically, depending on the type of image being printed and there is no manual setting in the driver.


Print speeds, given the price and market of the LaserJet 3550, are reasonable. We completed our five page text printed in just 40 seconds, which extrapolates up to a page rate of around 7.5 pages per minute. The text and graphics and high resolution full-colour photo prints took 24 seconds each, still giving over 2ppm. Even so, given the rated print speed of 16ppm, this is not a fast printer, even for a colour machine. 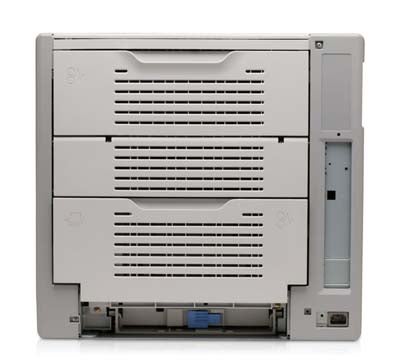 Print quality is good but not as natural as colour lasers such as the Konica Minolta Magicolor 5440DL, reviewed recently. Colours in our test photo print looked a little over-saturated, a bit like early, hand-retouched seaside prints. Blocks of colour in the business graphics and text page were clean with little dithering apparent, but some of the colour tones were slightly off from their intended use – blues in particular came out over-dark. Black text printed light and precise, as is usually the case with HP printers.


HP quotes the four colour cartridges, with their integral developer drums, as the only consumables, offering replacement fuser and transfer units as ‘maintenance kits’. Since these two each have service lives of 60,000 pages, we think they should be considered consumables, as they’re quite likely to be replaced during the service life of the printer. As such, we’ve included their costs in our running cost calculations.


Running through the figures gives a five per cent black page cost of 1.96p and a 20 per cent colour page cost of 8.47p. These figures sit pretty much in the middle of the range of running costs for colour lasers we’ve reviewed in the last year. Bear in mind though that, as with all laser printers, if you increase the toner coverage – for example by printing a photograph – the cost of printing the page will rise, too.


The Color LaserJet 3550 is a fair colour laser printer at a good price. It’s not that quick and, by default, its image quality can be bettered, but it’s easy to maintain, well-designed and comes with good software. The networked ‘n’ version is a worthwhile upgrade for workgroup use.