Colour laser printing is taking over from its monochrome counterpart in many offices and although lots of documents will still be printed in black and white only, the ability to add colour is increasingly important. This new, small workgroup laser printer from HP is designed to provide the speed needed when a printing resource is shared among a group of people.


Housed in a cream and charcoal grey case with a slight curve to its front panel to relieve the ‘big cube’ look, the Color LaserJet 3000 is a large device, though still light enough to be moved around by one, muscular person. Aimed at the workgroup environment, it’s a little surprising that the main paper tray can only take 250 sheets at a time, but there is a 100 sheet, multipurpose tray, too, which folds down from the front panel. 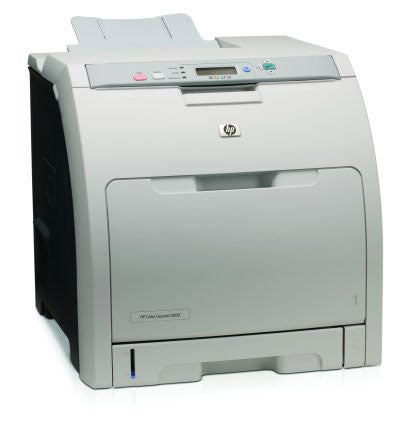 The simple front panel uses a backlit two-line LCD display and a set of seven buttons for control, though most comes from its USB 2.0 connection to a PC. Neither parallel nor network connections are provided in this version of the machine, though both of these are available as standard, further up the range.


All the consumables for this machine are supplied pre-installed, though you have to remove the toner cartridges and pull the tapes on them before you can start printing. The four toner cartridges are stacked up one above the other inside the case and the transfer belt sits vertically next to them.


The printer driver is pretty comprehensive and offers page imposition at up to 16 pages per sheet, watermarks, size reduction and a series of digital adjustments reminiscent of those provided with HP’s digital cameras. They include sharpening and softening an image and increasing the level of detail in darker areas by using a digital flash.


Other than the driver, HP offers its EasyPrinterCare software, but when you follow the link to the site, you find it won’t be available until early 2006. When it is launched, you should be able to use it to track your print usage and automate the purchase of supplies.


The main determining feature of a laser printer’s price is its print speed and HP claims 29 pages per minute in black and 15ppm in colour for the Color LaserJet 3000. As usual, these are for draft prints and we saw our five-page text print complete in 21 seconds, giving a normal mode black speed of 14ppm and a colour speed of 3.75ppm. In themselves, these aren’t bad speeds for a colour laser printer in this category. In real terms, though, for typical short print jobs, you’re talking less than 10 seconds faster than a cheaper printer, printing at, say, 20ppm.

The print quality is a bit variable. Black text pages, while cleanly printed and easy to read, come out a dark grey, rather than a true black. In contrast, colour fills, as in graphs and charts, print darker than their on-screen equivalents by default (though you can adjust for this). Photo prints also exhibit some colour shift, with blues veering slightly to the purple, and lose a lot of detail in darker areas.


Again you can compensate for these problems, most directly with the digital adjustments offered in the driver for contrast and digital flash, but it would be good to see better reproduction straight out of the box. 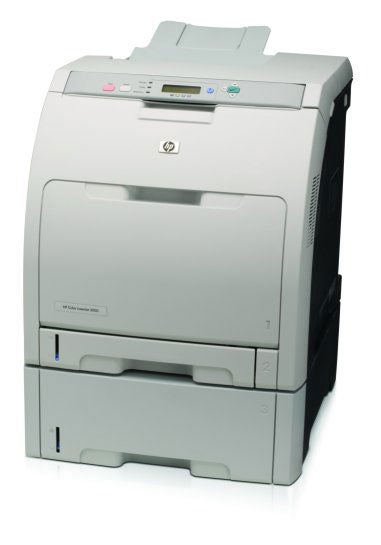 HP doesn’t quote the noise level from the LaserJet 3000, but we measured it at 64dBA, which is loud. While it would probably go unnoticed in a busy office, it could make it awkward to take a phone call, if it were printing beside your desk.


HP’s toner cartridges include photo conductor drums to build up the image in each colour, before the complete image is transferred to the paper using a transfer belt. The black cartridge should print 6,500 pages at five per cent colour, while the colour cartridges are available in standard and high-yield versions. The standard yield cartridge produces 3,500 pages and the high-yield one, 6,000 pages, both at five per cent cover per colour.


Of course there should be two other consumables: the photosensitive transfer belt and the fuser unit. In fact, these components have service lives of 150,000 pages each, so we’re happy to treat them as lifetime components. This gives a cost per page of 1.72p for five per cent black text and 6.30p for 20 per cent colour. These figures are good in comparison with rival machines in the same class, with the colour page cost particularly competitive.


Although the Color LaserJet 3000 uses HP’s new Colorsphere toner, we weren’t that impressed by its print quality. The printer’s speed is impressive, but you’re paying quite a bit extra for the increased throughput. As a workgroup machine we would expect a network connection as standard, too.