If 2007 was the year that Asus chose to introduce the small and affordable sub-notebook, then 2008 is the year that the concept has really begun to take off. Asus, predictably, has lead the way once again, with its updated Eee PC 900 putting right many of the issues raised by the original. Meanwhile, Intel has enthusiastically embraced the idea by launching its Centrino Atom platform for small, low-power, affordable notebooks and MIDs (Mobile Internet Devices). There are a few machines mooted to use Atom, most notably the impressive looking MSI Wind, but it appears it could be a while before we see Atom powered machines hitting retail.


As such, it’s been necessary for companies to find alternatives while Intel ramps up production. Asus’ solution thus far has been a 900Hz Intel Celeron CPU, but other companies have had to resort to less familiar options, the VIA C7-M 1.2GHz CPU being a popular alternative. It has popped up in a number of Eee PC-alikes, albeit with mixed success, so it was something of a surprise to see it powering HP’s first foray into the sub-notebook market, the slightly awkwardly named HP 2133 Mini-Note PC. 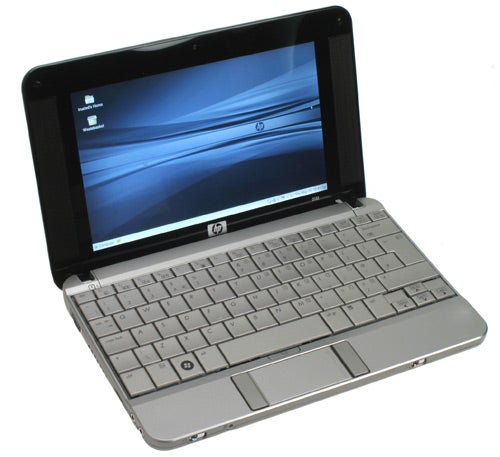 Though it lacks a catchy name, compared to the toy-like Eee PC the Mini-Note PC is a stunningly stylish piece of design. Weighing in a heavier but nonetheless portable 1.27kg the brushed metal lid and underside complements the silver internals and gloss black bezel beautifully, while its curves make for a pleasingly tactile shape that immediately impresses. If the Eee PC borrows the MacBook’s iconic white finish, the Mini-Note PC feels far more like a product produced by the house that Steve Jobs built.

This comparison, though, doesn’t do HP much justice because it too has been designing and producing attractive notebooks for quite a while now and its experience is borne out in the Mini-Note. Everything about the machine feels exceedingly accomplished, with a compact but lightweight feel and a sturdiness that belies both its price and size. Try and bend the screen and you’ll struggle to produce much movement at all. Apply some pressure on the outside of the lid and you’ll be hard-pushed to transmit it to the LCD panel itself. 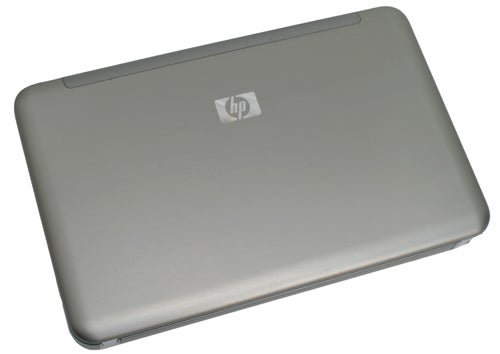 Nowhere is this quality more apparent, though, than in the borderless keyboard. Unlike the Eee PC that can be best described as “good for the size”, the keyboard on the Mini-Note PC would be no less acceptable on a machine costing a lot more than the £350 needed to buy the Linux edition we’re reviewing today. Indeed, in terms of layout and feel, it apes another Asus product, the 11.1in U2E-1P057E ultra-portable, quite comfortably. It has a large and friendly Return key, suffers from no obvious quirks and unlike the Eee PC its keys are no smaller than on any ordinary notebook. Vitally, the keys themselves also have a crisp level of travel and response that makes typing brisk and easy.

Already, then, the Mini-Note PC is making an excellent account of itself. With a keyboard that knocks seven shades of something unpleasant out of the Eee PC’s effort it’s already on the right track and the sleek metallic design is class personified. And, when you take a look at the feature list, there’s plenty else to smile about. 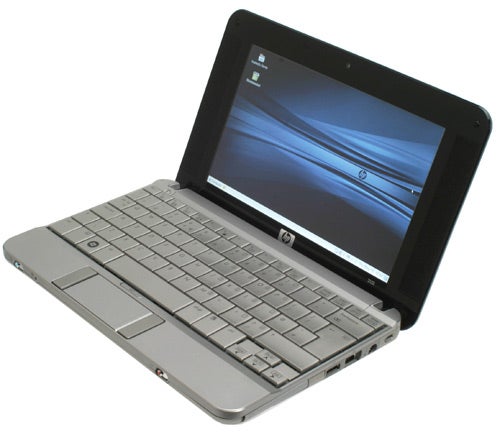 For storage there’s a very capacious 5400rpm 120GB hard drive and as ever you’ll find both wired and wireless networking on-board. There’s even Bluetooth, too, while a webcam with dual microphones is another neat addition. Its 1GB worth of DDR RAM is also adequate given the usage, though if you opt for the significantly more expensive Vista version you get 2GB instead.


Connectivity is, of course, limited by the size of the chassis, but even here the Mini-Note comes out well. There are two USB ports, one of which is powered, along with a D-SUB (VGA) video output, headphone and microphone jacks and an Ethernet port rounding off the standard stuff. In addition there’s a 54mm ExpressCard slot and an SD card slot, and even a lock slot. Meanwhile, on the front, you’ll find a hardware wireless switch, so it’s easy to save battery when you’re not using the Internet. 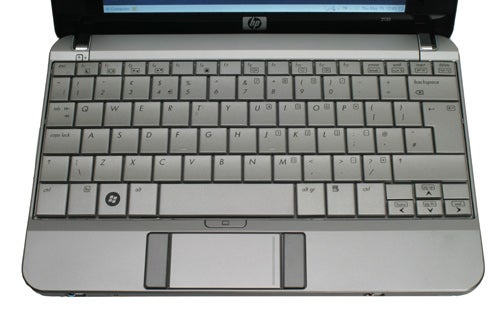 For all these qualities, though, there are some predictable compromises to be found, beginning with the touchpad. That it’s fairly small isn’t a great surprise – it’s a small machine after all, but truth be told it isn’t the size that’s the problem; it’s the buttons. Why? Because they’ve been placed either side of, rather than below, the touchpad and though initially this may seem quite a smart move, it’s amazing how difficult it is to get used to.


Anyone who uses a laptop regularly will find themselves stabbing thin air from time to time and it takes a fair amount of practice to make your brain think ‘left’ or ‘right’ rather ‘down’. Still, it’s something you’re likely to get used to and given the choice between this and a less intuitively laid out keyboard, this is the better compromise. 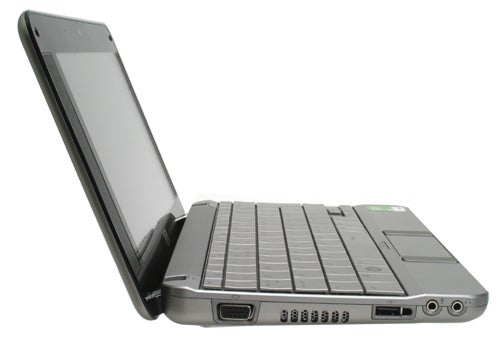 We’re also not entirely convinced by the screen. Provided you’re indoors it’s no problem at all. In fact we’d go as far as to say it’s excellent given its sharp 1,280 x 768 resolution and decent 8.9in size. But HP has given it a ‘scratchproof’ glossy finish that makes using the Mini-Note PC in high-light outdoor conditions a real challenge.


Neither can it claim be a particularly cool or quiet machine. During use the fan runs without pause and though it doesn’t buzz like on the Asus U2E, it’s a little obtrusive. Likewise, the bottom of the machine gets very hot given the relatively low power requirements – a product no doubt of using a regular hard drive as opposed to a cool and quiet SSD. In any case, though, these issues aren’t catastrophic, they do put small dents in the Mini-note’s appeal.

Although the reflective screen, odd touchpad and slightly excessive heat and noise are negatives, they’re nothing compared to the disappointing overall performance. In fact, to call the Mini-Note’s performance ‘disappointing’ is a little disingenuous since it’s worse than that; it’s just downright poor.

Having rightly criticised the two and half to three hours managed by the Eee PC 900, the Mini-Note makes it look like a thoroughbred in this department. Using the Mini-Note at full brightness with wireless turned on resulted in a disappointing one and half hours, while even turning off wireless and cutting brightness in half only added a further 30 minutes of very light usage. Clearly the 3-cell battery supplied with this configuration isn’t up to the job and though you can get hold of a 6-cell battery, it adds extra weight and juts out from the bottom of the machine.


More concerning, however, is the general performance offered by the Mini-Note. Though a 1.2GHz VIA CPU might sound faster than a 900MHz Intel Celeron this isn’t the case at all. One can forgive a level of slowness when booting and launching programs, but there are definite limitations on what the Mini-Note can handle.

For example, you can watch YouTube and other flash-based video in windowed mode easily enough, but moving up to full screen results in jerky and unwatchable playback. More annoying, though, is this applies to any kind of video playback as well, so you can forget about watching downloaded video in full screen mode. Lest we not forget battery life either, since it’s nothing like good enough to make regular viewing a reality.


The Mini-Note isn’t anywhere near as user-friendly as the Eee PC, either. While both use Linux operating systems, the SUSE 10.1 OS used by the Mini-Note isn’t tailored in any particular way for inexperienced users, while documentation does little to enlighten. This will no doubt please more experienced users since it presents them with a ready to use machine with the flexibility they want, but anyone else will be left floundering in the dark. Moreover, it makes something of a mockery of HP’s stated ‘education’ target audience, since it seems hard to believe teachers or students weaned on Windows would find the change an easy one.

It would help, too, if the pre-installed software on offer were a little more exhaustive. Open Office 2.3 is on hand for productivity and it’s well suited to its task. Likewise there are plenty of useful utilities such as RSS feed readers, mail clients, music players and photo browsers. Yet, HP has neglected to pre-install any kind of AVI/DivX capable video player as standard, instead opting for RealPlayer 10 – does anyone seriously use RealPlayer anymore? Not by choice, that’s for certain.

Ultimately, all the Mini-Note’s shortcomings give the impression of a product that has been pushed out the door prematurely, losing its focus on the way. Its stated target market is the education sector yet it’s not user friendly enough for this, and it lacks enough processing power and battery life for the more demanding user. Thus, it doesn’t suit anyone’s needs perfectly – a real shame considering the superb design. 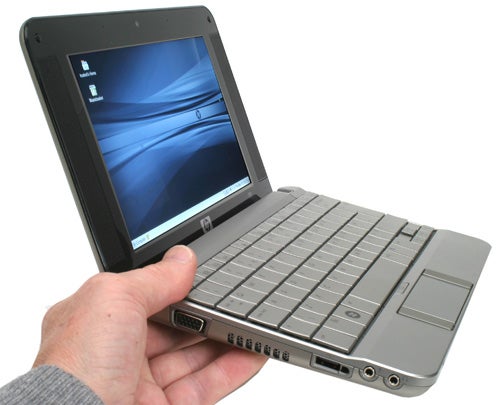 Nothing illustrates this point better than the lack of balance offered by the two configurations on offer in the UK. At around £350 from SuperGPS.co.uk and others, the Linux edition seems the most logical option; it’s more affordable and a relatively cheap RAM upgrade would help boost performance a little.


As for the more expensive second configuration, which will set you back upwards of £500, there are a few hardware changes, with RAM upped to 2GB and a 6-cell battery thrown in along with the 3-cell one offered in the base spec. Bizarrely, however, it also comes pre-loaded with Windows Vista. As anyone will tell you it’s the last OS you’d want on a low-power system like this and given the VIA CPU even struggles on Linux, it’s going to be even worse on Vista. A Windows XP based version would make a good deal more sense, giving people a familiar OS that wouldn’t bog down the system too much. 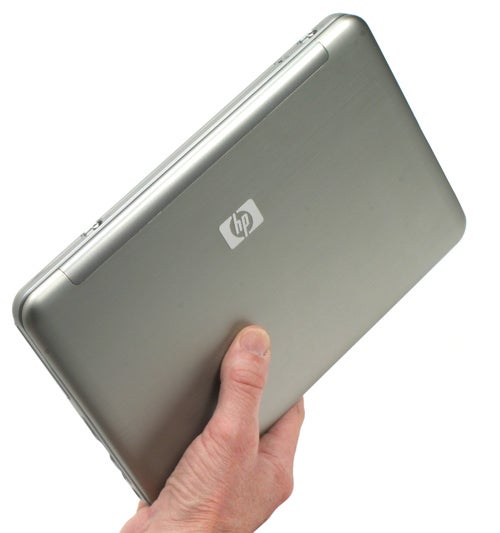 
Were this review based on design and features alone the HP 2133 Mini-Note PC would be walking away with a Recommended Award: that’s a fact. It has a superb keyboard and a chassis that’s a cut above both the Eee PC and anything we’ve seen, released or otherwise.


Unfortunately for HP there’s a lot more to it than this and the Mini-Note struggles to match even the modest exploits of the Eee PC. Its 1.2GHz VIA CPU chugs when shown any kind of video and battery life is poor, managing even less than the none too impressive longevity offered by Asus’ machine. If and when HP updates this with something faster, be it Intel’s Atom or a new generation VIA CPU, then it could be onto a real winner.