The biggest thing that House of the Dead: Overkill – Extended Cut has going against it is that it’s an HD port of a Wii game. It’s had a bit of a polish, with some revamped textures, effects and character models, but every time its heroine – the bodacious, badass Varla Guns – moves her head to showcase her non-flowing, entirely static hairstyle, you’re reminded that this is a game that used to be on Wii. But then if you’re spending too much time obsessing about things like that, then you’re not really getting into the spirit of the game. 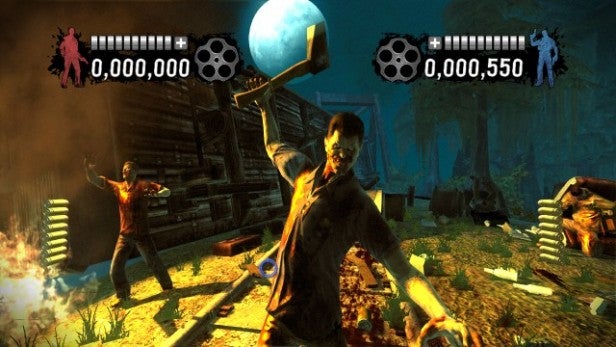 That’s because House of the Dead: Overkill – Extended Cut (or Overkill as we’re going to call it from here on) is not like any other Wii game you’ve ever played. It’s a brutish, hyper-violent video nasty of a lightgun game, which takes the basic gameplay from Sega’s legendary arcade series – popping caps at mutants and zombies – and wraps it up in an inspired homage to seventies grindhouse cinema. It’s fantastically foul-mouthed, hideously gruesome and packed with pneumatic gun-toting strippers, zombie cheerleaders and brain-munching trailer trash. Of course it’s all done tongue-in-cheek, and so ludicrously OTT that it’s hard to imagine anyone being offended, but – to be honest – it’s not the kind of game where everyone will get the joke.

The good news is that, with the Move controller working as a lightgun, it’s a very effective example of the genre; probably the best one for Sony’s system. With the camera moving on rails through the different scenes, the mutants – apparently we shouldn’t call them zombies – come thick and fast towards the screen just waiting to be blown away. There are piles of cash to shoot that you can bank to upgrade or buy new guns, health-packs that recharge your dwindling health and power-ups that slow down the action and give you some breathing space to thin the undead crowd.  Every now and then the game throws in a human character to save (not shoot), and you get extra points for doing so. At the end of each section is a boss battle where you target weak-points or blast away at specific areas to avoid the more damaging attacks. Basically, that’s all there is to it. 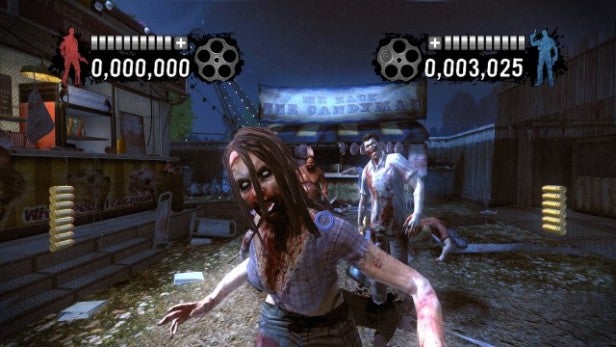 However, while – like all lightgun games – Overkill is fairly basic, it’s an exciting and well-designed example. Signs of its Wii origins still peak through, but it’s a game with good-looking, nicely themed scenery and suitably ghoulish mutants. Meanwhile, the action is well-paced, with enough zombie types to keep things interesting and some fine set-pieces, like a mutant-troubled ghost train at a spooky carnival. It’s good fun for a single player and even more fun with two, where that old cooperation/competition dynamic kicks in.

And while it’s still not a massive game, with nine chapters to the Wii version’s seven, there’s plenty of replay value. Not only are there high-score opportunities and masses of extras to unlock, but a Director’s Cut option extends each chapter slightly and throws in new bonus objectives. We also get a handful of shooting gallery mini-games to extend the experience slightly further. 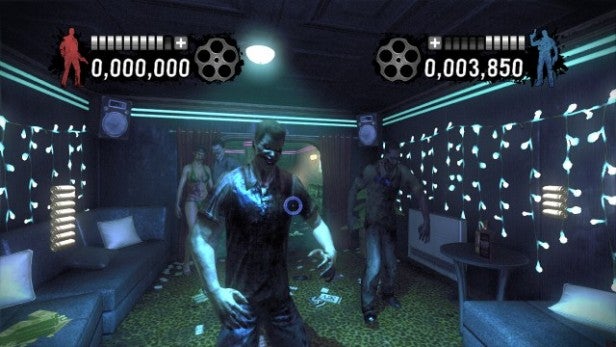 Criticisms are fairly meagre. You could moan that having effectively infinite continues means you can get through the game too quickly without demonstrating any real skill, but as each continue halves your score there is some motivation to do better. Some of the boss battles have very irritating attack patterns where limited capacity and gun reload times make it difficult to actually get a hit, and a few of the cut-scenes drag and there doesn’t seem to be any way to skip them. There’s also a 3D mode, with support for anaglyphic and proper stereoscopic  support, but the former is pretty much unusable (though fun in a kitsch sort of way). Still, even when you take all this into consideration, Overkill is still one of the best times you can have with a PS3 and Move.

It’s not the most challenging game for Move sharpshooters, but House of the Dead: Overkill – Extended Cut is a brilliant lightgun game which makes the most of its grindhouse trappings and OTT gore. If you like the style and the genre, it’s an essential Move release.