The Hotpoint MWH 27321 B is a combination microwave and grill with no oven.

It performed well in our tests, especially the programmes that used the Crisp Plate, but its controls are a little annoying. 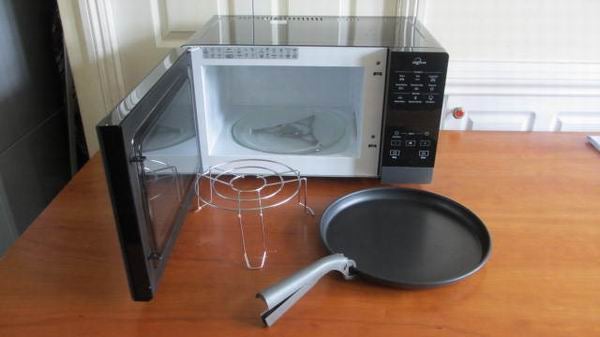 Hotpoint MWH 27321B – Design and Features

Design-wise, the Hotpoint MWH 27321 B sports nice clean lines. The front of the appliance is finished in a fingerprint-free black glass with a brushed stainless steel trim across the bottom. The microwave comes with a wire rack for grilling, a non-stick metal Crisp Plate and a clip-on handle for the pan. 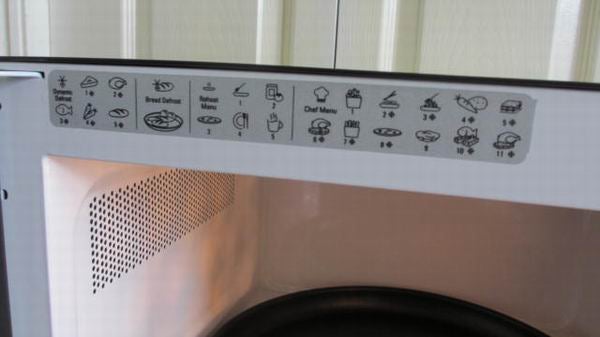 There’s no door-open button; instead, you reach underneath and pull it open. This takes a bit of getting used to.

In terms of features, there are six microwave power levels and one grill level. You can also use the two functions in combination at five different levels of power. Dynamic Crisp allows you to use the grill and microwave simultaneously, with the plate absorbing microwaves in order to become hot enough to cook your food from beneath.

There are five Jet Reheat programs that let you warm up soup, sauce, chilled pizza, a dinner plate or beverage by weight, rather than time. And a further 11 Chef Menu programs for cooking common microwave dishes, most of them from frozen. These include popcorn, rice, pasta, vegetables, lasagne, wings, French fries, pizza, quiche, breaded fish and cutlets. Some of these require the Crisp Plate, others don’t; unfortunately, the display doesn’t inform you either way – you’ll have to refer to the instructions.

There’s a clock and a child-safety lock, but no kitchen timer. There’s also an Auto Clean function that simply heats some water so that the steam lifts grime and odours from around the insides of the appliance. 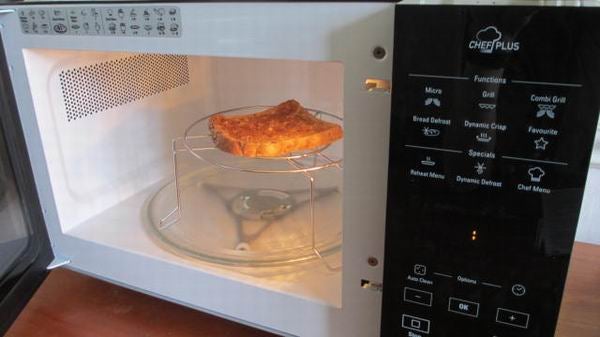 Thanks to the turntable and wire rack, grilling is even – and it’s fairly quick. A slice of toast was well done on one side in three minutes; two would probably have been sufficient. Turning it over to make cheese on toast, the other side took four minutes but cooking was even and measured. Interestingly, the oven’s quartz grill elements are only in the back half, but this doesn’t matter thanks to the turntable.

I wasn’t a fan of the timer controls, however. The buttons at the top are fine: clear icons for the various functions. But to select cooking level and either weight or cooking time, you have to press plus and minus buttons in a process that’s slower (and easier to overshoot) than microwaves with a knob.

Throughout the test, this was the biggest annoyance. A simple act such as microwaving something for five minutes requires you to press Microwave, OK (to accept the 800W full power level), then hold down the plus button for 5-6 seconds, and then probably overshoot and have to press the minus button briefly. It shouldn’t be this hard.

The only workaround is that you can press the Start button to immediately cook on full power for increments of 30 seconds. So the workaround for five minutes of cooking is pressing Start ten times. 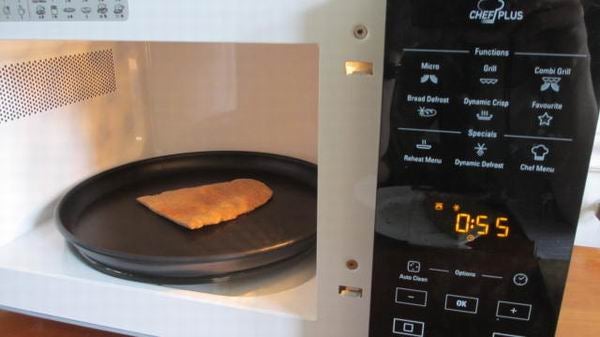 Next I used the Dynamic Defrost bread defrost program, which uses the Crisp Plate to defrost a frozen pitta bread. The Hotpoint first pre-heats the pan and then it prompts you to add the bread. The 1.5-minute program was overkill for our solitary pitta, so I interrupted it after 30 seconds. But the result was indeed defrosted, warm and not too moist. A good way to prevent soggy-bottomed defrosted loaves. 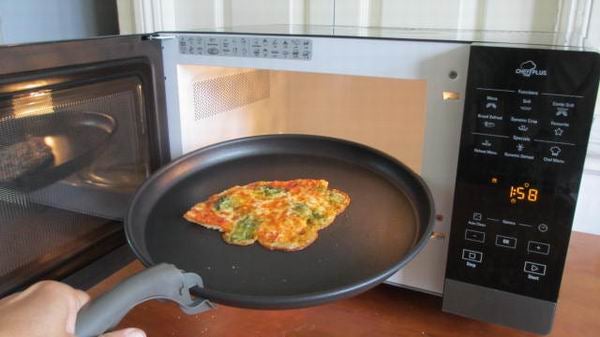 Speaking of soggy bottoms, our next test of the Crisp Plate was frozen pizza. It’s one of the 11 Chef Menu programmes, so that made things fairly simple. The cheat sheet of icons inside the oven door proved to be a handy reminder of which programme is which.

It was easy to see progress through the over door – which is good, because the pizza cooked quickly and I had to rescue it before it was overcooked. The cheese was melted and sliding over the edges of the slice, but the underside was indeed nicely crisped. At this point, I also appreciated the handle for the Crisp Plate: most appliances don’t come with one so you’re left reaching for an oven glove. 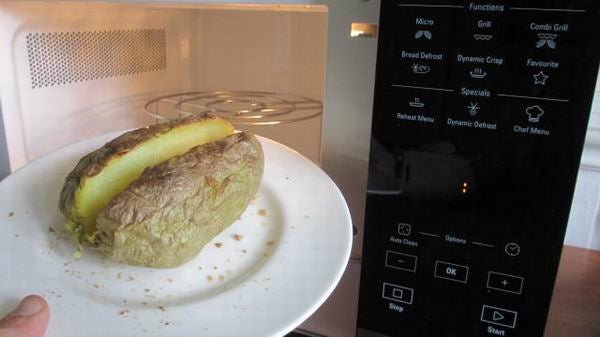 Sadly, there’s no preset or recommendation for jacket potatoes, so I simply placed it in the microwave and set it off to cook. This was slow work on an admittedly large (400g) spud. In the end, it took 12 minutes to cook through. The results were standard issue for a microwave. Cooked and fluffy, but with a soft skin. I tried to finish it with the Hotpoint’s grill. It took three minutes of grilling to crisp the top fairly well.

Cleaning was simple enough, but not as easy as a flatbed design. 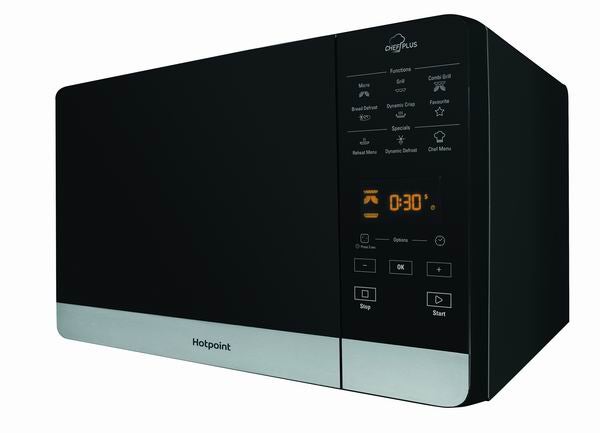 The Hotpoint’s combination of microwave and grill lacks the variety of programmes offered by some oven combis. However, it’s simple and does a fine job of the basics. I just wish those buttons weren’t such a pain.

For the same money, it’s worth considering the Sharp R861SLM. Or spend more and opt for the excellent Panasonic NN-DF386.

A good combination microwave and grill with a Crisp Plate, but it lacks the variety of programmes offered by rival appliances.