The Hotpoint Curve MWH 1331 B is a compact microwave (no grill or oven) with a curved back, designed to fit in a corner. 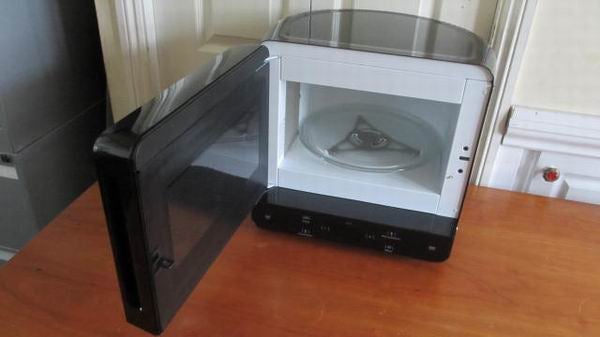 Open the door of the MWH 1331 B and the first thing that will strike you is how high up everything sits. The brains and the buttons can all be found below the cavity. The next thing you’ll take note of is its size – it’s small (but tall) on the outside and small on the inside too.

It fits a 280mm turntable – just. It feels cramped, both in terms of the width and height. But that’s okay – this is a non-combi microwave and it sets out to do just one job, well. 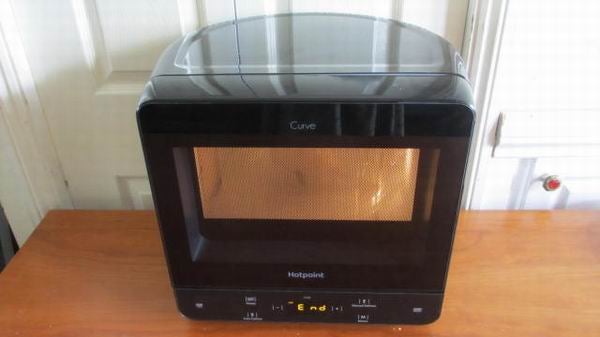 The rear of the machine is curved, so it’s designed to be slip into the corner of a worktop. The front offers a black glass finish that, thankfully, seems to be immune to fingerprints. As mentioned, some simple touch controls sit at the bottom of the from fascia.

Press power to cycle between the four levels: Jet (700W), 500W, 350W and 160W. You can also defrost in one of two ways: by time or weight (between 100g and 1.5kg). A Memo button enables you to save one favourite programme, plus there are Start and Stop buttons. You can press the Start button to immediately cook on full power in increments of 30 seconds.

The Hotpoint Curve also includes a clock, a kitchen timer and a child-safety lock. 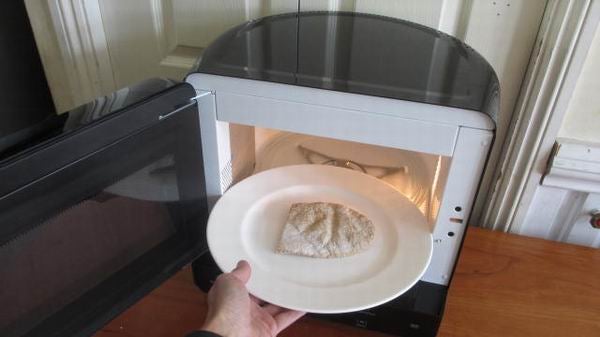 The first test of the Curve was simple: could it fit in a dinner plate? The answer was no: my – admittedly, rather large at 295mm – plate would not pass. Measure your plates before you shell out on this microwave, or else you may find yourself having to go straight back out to purchase some china.

Aside from that – and to be fair, this will be an issue with any small microwave – the Curve’s design works rather well. The back of the cavity being curved doesn’t present a problem in itself since your food has to fit on the turntable anyway: the corners of a microwave cavity really are wasted space unless it has a flatbed design.

In the next test I used Manual Defrost on a pitta bread. The Auto Defrost program lets you do this by weight, but only from 100g to 1.5kg, so I defrosted by time instead. Thirty seconds was just enough to defrost the pitta bread without it becoming too warm or wet. Impressive. 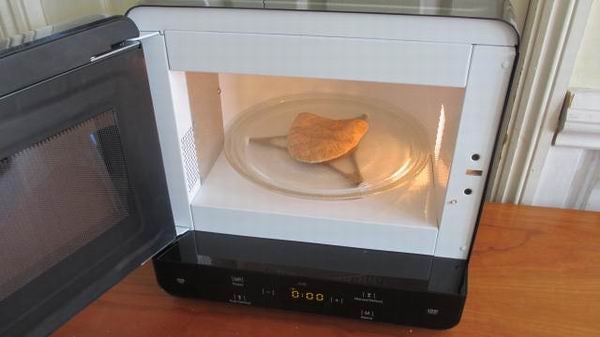 There are no cook-by-weight programs, or those that let you cook particular types of food. I decided to throw in a slice of frozen pizza anyway, though, just to see how it fared. Would some parts cook and others remain frozen? Would the cheese melt properly? Would the bottom be soggy? I had to know…

The answer is that it cooked through and the cheese melted – a little too much really. Although the slice of pizza wasn’t browned, it wasn’t burned either. And the base wasn’t so much soggy as doughy. It was edible. But then this dish wasn’t a test of the Hotpoint Curve, because it doesn’t have a function to cook frozen pizza. Instead, it proved a theory: if you like to cook frozen pizza in a microwave, it’s worth getting one with a grill.

Jacket potatoes are microwave stalwart, so I cooked a big 300g spud. I started off with 5 minutes on full (700W) and then kept adding time until it was cooked through.

The cavity is well lit, so it’s easy to keep an eye on progress. Well, it was initially; after a few minutes of cooking time, the door was covered in condensation so I could see very little.

In the end, the potato took 10 minutes to cook – which is no surprise for 700W of power. The results were good, cooked evenly and not overdone on the bottom; soft-skinned – but that’s to be expected from a microwave jacket. However, the interior did get far too wet: the cavity, the turntable, the door. The insides of the microwave were drenched, suggesting the appliance doesn’t extract moisture well enough. Although maybe you could put this to use to do some steam cooking, perhaps? 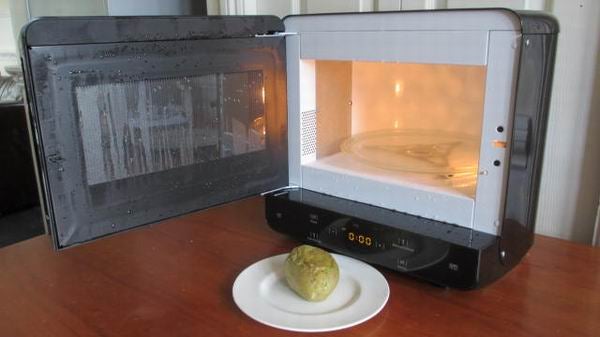 The controls are brilliantly simple, perfect for anyone who hates instruction manuals and just wants to pick a cooking time and hit “go”. However, the plus and minus buttons to select time can be a bit of a drag. You have to hit either repeatedly to change the cooking time slowly, or hold down to scoot through them quickly – but risk overshooting and having to amend.

Alternatively, you can press the Start button to immediately cook on full power for increments of 30 seconds. This is fine for short cooking times but it isn’t as user-friendly as models that have a knob to select the cooking time. 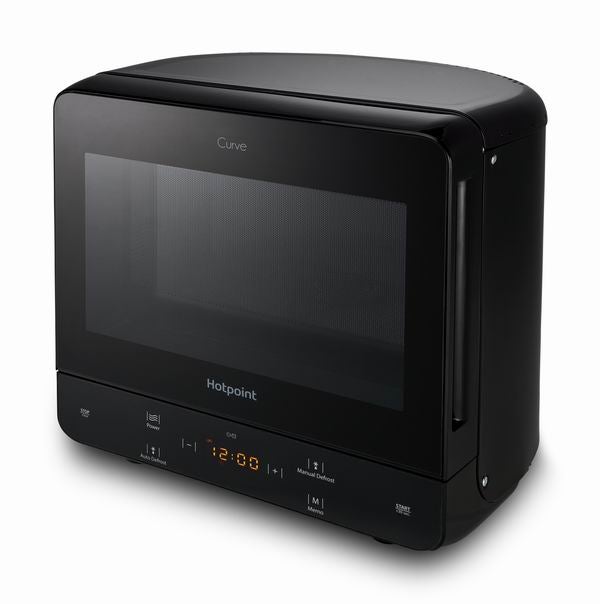 If you’re after a compact, straightforward to use microwave to fit in the corner of your kitchen then the Curve is a great buy.

But if a corner fit isn’t a necessity, or if your budget is tight, then the Beko MOF 20110 is cheaper and offers a greater number of features. Or you could go large and get a combi, such as the Sharp R861SLM or Panasonic NN-DF386.

This simple, space-saving microwave gets steamy but it’s the perfect fit for a corner.