Offering speedy heat-up times, good-looks and simple and responsive controls, the Hotpoint CIS 641 F B is a great buy.

Coming in at under £410, the Hotpoint CIS 641 F B is an impressive-looking, four-zone induction hob that’s suitable for cooking with a range of different pan sizes. It offers nine power levels, a Boost mode that produces super-speedy heat-up timings, and a Flexi zone too.

With responsive controls, the CIS 641 F B is easy to navigate and nicely quiet to use. While a couple more features would have given the CIS 641 F B that extra sparkle, all-round it’s a great induction hob with a respectable price tag. 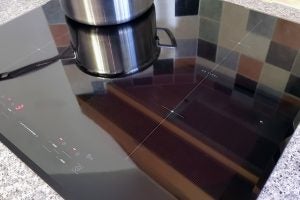 With its smooth black glass surface and bevelled edge, the CIS 641 F B certainly looks the part. It has clear grey outline markings on the control panel and feels user-friendly. It’s equipped with four square cooking zones: one small, one large and two medium – although they’re marked out on the surface with slight texture, which is quite difficult to see. At first, we thought all four zones were the same size, but look carefully and you’ll see the differences.

Each of the four cooking zones has nine cooking levels, including a Boost mode that’s ideal for reaching high temperatures quickly. You can switch the cooking zones to the desired heat level using the slider operation bar. Lighting up bright red whilst in use, the little zone displays above the selection buttons are very clear to read across the black glass. 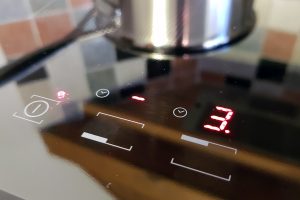 Included with the Hotpoint is an HD Flexi zone that links the two medium-sized right-hand zones together. This can be used as two separate cooking areas or one large. This function would be great for your oval, rectangular and longer pans.

For safety, an “H” symbol is displayed for each zone that remains hot after use. You also get a timer function that can be used across the four zones. Although this hob certainly looks great, we felt that a few more features would have really given the Hotpoint that extra zing at this price. 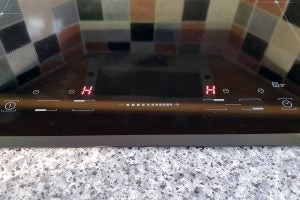 The grey outline around the touch controls compliment the black glass perfectly – and, even more impressively, they were incredibly responsive. Your fingers will simply glide over the power slider to your chosen setting, or you can press the “+” or “-” buttons repeatedly. Either way, the operation is slick and hassle-free. Pressing the “+” key when the power is already on level 9 will engage the Boost mode, displayed with a “P”.

While it remains a bit tricky to see, on the left side you get a small zone ideal for milk pans and smaller saucepans, with a large burner at the rear. This will fit very large round pans and was even okay for our biggest frying pan. 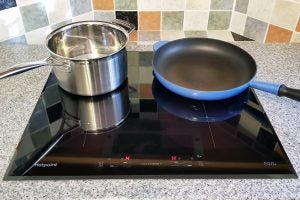 Although the CIS 641 F B promotes an HD Flexi zone, it’s simply two round burners placed reasonably close together and operated by a single control. That gives you a figure-8 heating area that’s sufficient for oval pans, but doesn’t quite offer the coverage and even heating of dedicated burners shaped for the task.

Like the Hotpoint’s other controls, the HD Flexi zone is easy to navigate, either as two separate zones or linked together as one larger zone. Perhaps the name is a little ambitious; it isn’t particularly flexible compared to models that include an array of smaller-shaped burners to best cover large pans.

The timer function worked well across all four zones and can be set to a maximum cooking time of 99 minutes. When this finishes the cooking zones automatically switch off, so there’s no need to worry about over-cooking your food. You can also simply turn this feature off by holding the timer button down for more than three seconds. 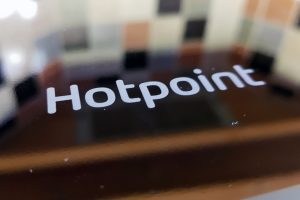 During use, a real positive for us was how little noise the Hotpoint CIS 641 F B  made compared to similarly priced competitors. On low power, it was virtually silent and only created a hum and gentle fan noise when things heated up. Being made from Schott Ceran glass, it was no surprise this Hotpoint was very easy to clean.

Using the Boost mode, displayed as “P” on the control panel, we placed our smallest 17cm pan containing 1-litre of water on the smallest burner to the front-left of the hob. Delivering 1.9kW of power into the pan, our desired 90ºC target was reached in 3mins 50secs. Very impressive.

The large rear-left burner is something of a powerhouse, putting out a maximum 3kW into our 19cm pan containing 1.5 litres of water. This reached 90ºC in a Usain Bolt speedy 3mins 40secs. That’s far quicker than even the most powerful kettle could boil 1.5 litres of water. 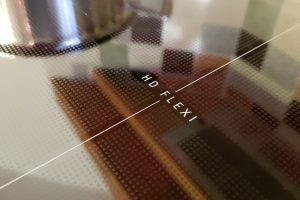 We tried our largest 21cm pan containing 2 litres of water on the rear-right burner, which is the upper half of the HD Flexi zone. This medium-sized zone put a solid 2.2kW of power into the pan, heating the water to 90ºC in a moderately quick 6mins 30secs. Although slightly sluggish in comparison to the above two tests, it’s actually about average for hobs at this price.

Through thermal imaging, we discovered that the four burners come in three different sizes to match the faint zone markings above. That would indicate you could easily speed up large pan heating times by using bigger pans on the bigger zone at the back-left. 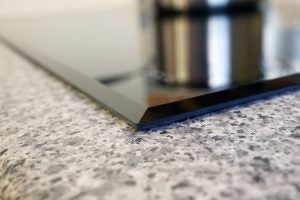 On thing that does let the CIS 641 F B down slightly is the rather brief manual. While most people will only ever casually glance at a hob manual, having all features articulately explained would have been easier than trying to fathom the Hotpoint manual’s diagrams and brief descriptions. Hardly a deal-breaker, though.

Using a large tray, thermal imaging confirmed that the Hotpoint uses two circular burners linked together for the HD Flexi zone. As mentioned, this created a figure-8 heating area, but since the burners are both a decent size, it didn’t leave too many cool spots on the large tray. The Hotpoint would work wonders when using a pan with a heavy base, skillet or griddle across the HD Flexi zone. 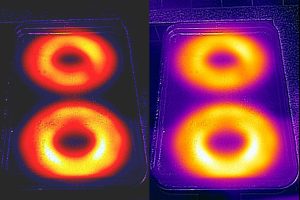 With super-responsive touch controls, easy-to-clean glass and chic good-looks, the CIS 641 F B doesn’t disappoint. Delivering super-fast heating, particularly on the top-left burner, this is an excellent hob at a great price.

We felt that the Hotpoint CIS 641 F B could have included more features to give it that extra appeal at the price (some of the other models on our Best induction hob list do more), plus the manual could have been clearer. However, if keeping your hob cooking quick and simple is your style, then this is a winner.