What is the Hotpoint CIF 952 BXLD?

Hotpoint’s vast series of domestic appliances encompasses several induction hobs, of which the CIF 952 BXLD tops its current range. The price of just under £1000 looks attractive when you consider this hob’s huge 86cm-wide cooking surface, five large zones and ample features such as automatic boil and simmering.

The confusing cluster of controls does transpire to be confusing, however, and despite large overall power claims, heat-up times with larger pans is only average. This Hotpoint is a reasonable choice for those wanting a large induction hob at an affordable price, but don’t expect the power or refinement of premium models. 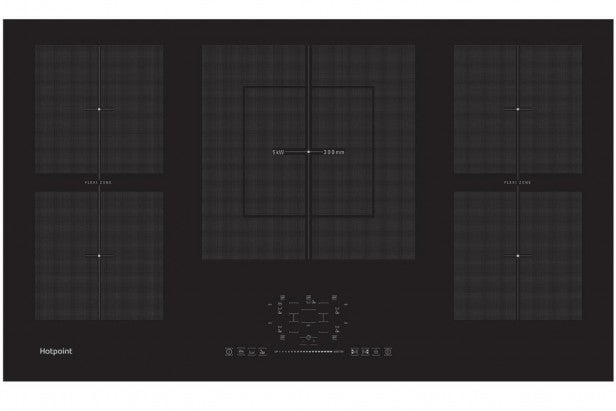 Hotpoint’s brand-new flagship induction hob is an imposing 5-burner beast, spreading its not inconsiderable cooking potential over an 86cm-wide glass surface. Why Hotpoint calls this a 90cm hob remains a mystery, but it’s a biggie and looks attractive for the size and spec.

The surface is polished smooth Schott Ceran glass with a subtle bevelled edge on the front and sides. Schott is a leading brand for ceramic hob tops and we know this surface will be super-easy to clean and polish.

The Hotpoint’s zone markers and controls aren’t so subtle. Fairly bold white lines for zone markers, plenty of legends such as the Hotpoint logo and Flexi-Zone markers, and a central burner letting you know it has 5kW/300mm heating potential are all quite an eye-full.

The control panel is no less inconspicuous, with a dense cluster of lines and symbols right at the centre-front of the hob. There’s one slider control for all zones, with power from 0 to 9 plus a boost function for fast heating. The four outer burners are all 18cm diameter circular, output up to 2.5kW each, and can be linked together in pairs to create larger zones for big pans and skillets. 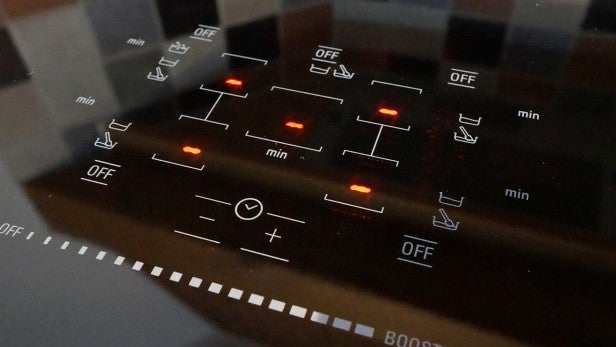 The central burner is a two-stage circular burner, with an internal 19cm zone and an extra ring burner around that expanding it to 30cm automatically for the largest of pans. This zone boasts a truly whopping 5kW output at full boost.

This hob has a maximum total output of 10.2kW. While that does mean you can’t run all five zones on boost at the same time, it remains enormously powerful. So much so that the workings of this hob are designed in two halves, both of which must be individually wired into your cooker mains supply circuit unless you have a three-phase supply. If that sentence made no sense at all, your friendly electrician will be able to advise you. 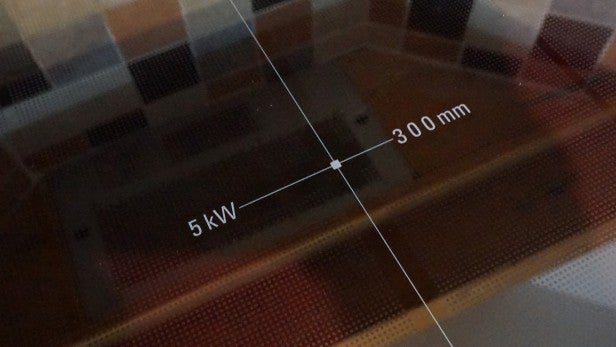 Bizarrely, only the top-left zone features Hotpoint’s Boiling function. This automatically selects the ideal power to bring water to the boil quickly and then backs down the power to keep it just below boiling point. The idea being that the likes of rice, peas or vegetables that need bringing to the boil and then simmering can be done automatically – and without boiling over when you’re not looking.

A central countdown timer allows you to set the time for each of the five zones before the hob beeps and the zone switches off. A pause button reduces power on all zones to a very low setting if you need to take a comfort break while cooking, for example. Hot hob warning is indicated by a letter ‘H’ in the display for the relevant zone, and a lock function shuts down the touch controls until it’s pressed and held down for three seconds. 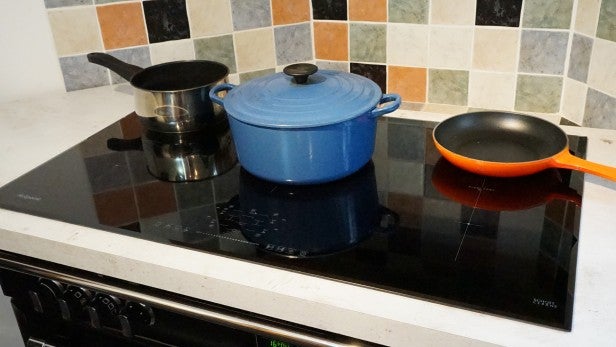 Having been very understated hob designs of late, the Hotpoint’s busy controls and bright orange indicators feel rather in-your-face. That’s no bad thing for trying to unravel the plethora of buttons and symbols in the control panel, but subtle it isn’t. Similarly, this isn’t a hob to silently get on with its chef duties. It has quite noisy fans, plenty of clicking and noticeable humming from the induction burners.

The symbols beside each zone are actually just indicators of the function that’s been engaged rather than buttons. To use any of the features or increase the power to each zone, you have to press the zone first to select it then adjust the power slider or use feature buttons along the front edge. A small dot then lights up beside the relevant symbol next to the zone display.

This takes some getting used to, and we didn’t have the hob in use long enough for this slightly odd way of operating to feel natural. When you have a lot of pots and pans on the go, it becomes frustrating to have to press each zone you want to control before making any adjustments or engaging features. 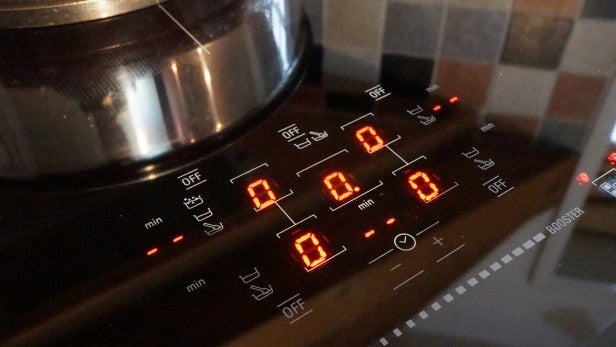 This almost invariably led us to attempting to control the power, but nothing happened because we hadn’t pressed a zone first. That is probably a better way around than simply having the controls locked to the last zone you’re using. That way, the potential to increase or decrease power to the completely wrong zone would be very high. All this to-ing and fro-ing between zone selection and the actual controls doesn’t feel that slick or logical.

While the Boiling, Simmering and Melting functions did work to an extent, they’re all very basic in operation and nothing like the advanced temperature-sensing systems used in Miele’s KM 6629 or Witt’s WIF78SQW2 models. Melting pulses up to around 400W of power to apply very low and slow heat to the pan, while the Simmering function pulses around 600W to keep pans on the boil – just.

The Boiling feature does work as prescribed, heating up a pan of water to boiling and then automatically backing it down to a simmer, but only if you follow Hotpoint’s instructions. You need to put a cold pan of water on the hob, noting the pan must be at least one-third full with a minimum of 1-litre of liquid, don’t use salt until the water reaches boiling point, and don’t use a lid. You also need to ensure the zone was cool without a hot hob indicator light on before you start. 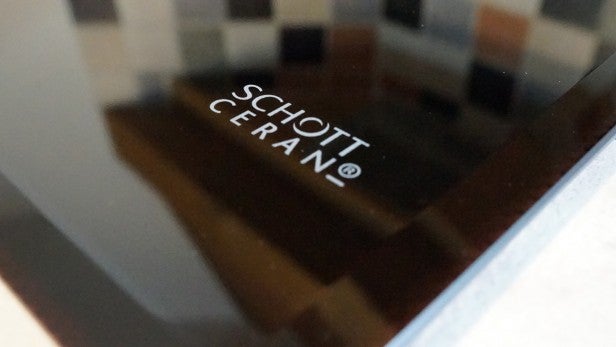 We followed all these procedures to the letter and, sure enough, the Hotpoint brought 2 litres of water and frozen peas to the boil and immediately backed down to a fairly strong simmer. Try to use this feature with a pan that you have already been heating, in a hot zone or with anything but pure water, and it doesn’t work. It simply boils over.

All of the Hotpoint’s buttons and sliders respond very well to touch, even with damp hands. The Schott Ceran glass is one of our favourite surfaces for responsive controls and cleaning afterwards, and the Hotpoint doesn’t disappoint here either. Egg, cooking oil and melted cheese were all removed with ease using a damp cloth. 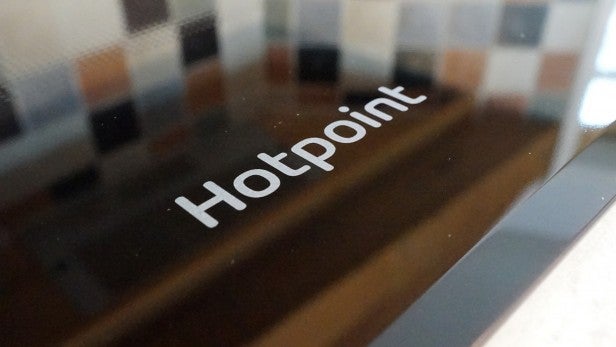 Despite the big numbers claimed for overall power and the whopping 5kW purported for the central zone, we were a little disappointed with Hotpoint’s power and heat-up speed with larger pots and pans. On Boost mode, using large pans (to garner most power from the induction burner), the left-hand Flexi-Zones delivered 2.5kW maximum. The two right-hand zones managed slightly less at 2.2kW each. These aren’t big numbers considering there are hobs out there with similarly sized burners that will deliver 40-50% more power.

However, all of the Flexi-Zones did manage to deliver 2kW to our 17cm pan, raising 1 litre of water to 90°C in a very swift 3mins 35secs. Moving up to a 19cm pan and 1.5 litres of water saw these zones deliver 2.2kW. This meant our water sample reached 90°C in just over 5 minutes – which is closer to average than speedy.

Our real head-scratching moment came with the central zone. Our 21cm pan clearly wasn’t large enough to trigger the outer ring of this extra-large zone. Hence, it received similar power to using any of the Flexi-Zones. Oddly, the power pulsed between 2.3 and 2.6kW every few seconds, taking just under 6 minutes to heat our 2-litre water sample up to 90°C. This is some 2 minutes slower than the fastest hobs we’ve tested. 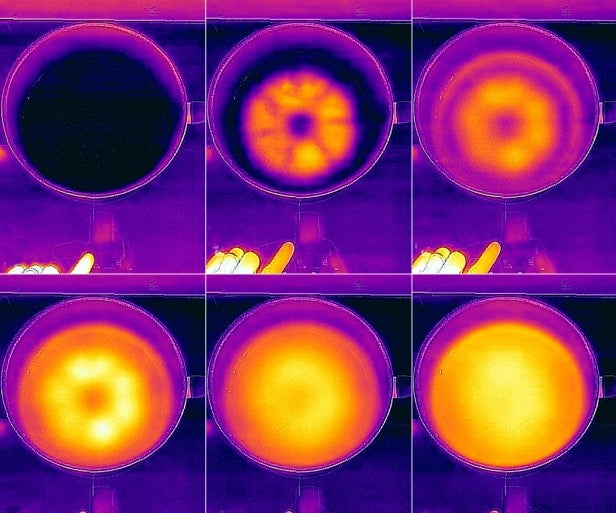 Thermal imaging clearly showed the inner and outer burners on the large central zone, but only if we were using a pan of at least 24cm in diameter. Clearly, if you have a sizeable flat-based frying pan (remember curved base woks don’t work well on induction), or a super-large steel-bottomed casserole pot then you’ll get the most from this zone. Sadly, with smaller pans it’s just the same power as the other four zones.

The thermal imaging showed that the outer zones are simply circular burners that link together under a single control when the relevant Flexi-Zone button is pressed. They’re not particularly close together, meaning the ‘waist’ between the two burners is quite large and will cause cooler spots on large pans or skillets. Using good-quality heavy base pans will help smooth the temperature out.

Should I buy the Hotpoint CIF 952 BXLD?

Hotpoint’s flagship induction hob is a spacious 86cm wide and can make the most of its five zones. Features such the Simmering and Melting functions work satisfactorily, yet the automatic boil feature only works if you follow the hob’s strict rules.

Add to this the fact that the cluster of control buttons can confuse and heat-up times with medium and larger pans is a little disappointing; the two-stage central burner will only deliver its full power potential with extremely large pans.

The CIF 952 BXLD doesn’t do anything particularly badly, but neither does it excel in any of its key attributes other than price – just under £1000 is competitive for a super-wide five-burner induction hob.

Hotpoint’s super-sized five-zone induction hob offers plenty of features and flexibility for its reasonable asking price, but it lags behind premium models for both power and refinement.