The Hotpoint ACP 778 C/BA is brimming with fun cooking features, flexibility and sleek good looks all at a reasonable price.

Full of fancy features and cooking options, the Hotpoint ACP 778 C/BA has plenty of wow factor on the worktop. It features two back-lit LCD panels, where you’ll find up to 63 common recipes and cooking methods, eight cooking zones and lots of ways of linking them together for various sizes of pots and pans.

The ACP 778 C/BA delivers on its promise of flexible cooking with a well laid-out induction top that handles the smallest milk pans and the largest skillets with ease. The novelty of the recipe menus might wear off and the control responsiveness was just a little shy of perfect, but this great-looking 77cm wide Hotpoint offers fabulously flexible and premium features at an attractive price. 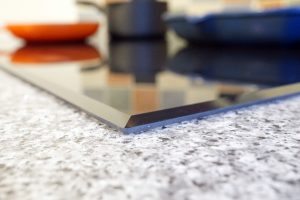 This eye-popping induction hob looks great with its sophisticated black glass and stylish bevelled edge. It’s complemented by sleek grey markings that outline the cooking zones for easy use. When turning on the Hotpoint, you’re welcomed with a cheery “Hello!” across the right LCD screen.

There are eight rectangular cooking zones, which you select by pressing the relevant area on the LCD screen on the left. Each has 18 power levels plus a Boost mode accessed using the central slider touch control. You can simply drag your finger across the slider to reach your desired level, or press P at the end to enter Boost mode quickly. 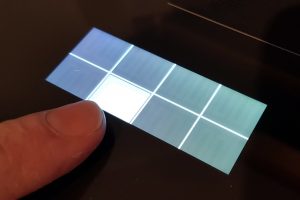 Hotpoint’s Total Flexi tech allows the whole hob-top to be used, rather than having to stick to marked circular zones as per a traditional hob. It achieves this by packing together eight oval burners across the whole area, with only a small gap between, and allowing them to be linked in a variety of combinations from a solo burner to the entire surface. Auto-pan detection shows you which zones to engage wherever you have placed your pan.

The little right-hand LCD screen offers access to Hotpoint’s comprehensive features and function through various layers of menus, complete with little graphics. We were particularly taken by the comedy fish symbol that inspired a bunch of pescatarian recipes during the test.

Deep in the My Menu feature you’ll find over 60 common cooking options for a wide variety of dishes and cooking options from frying to melting chocolate, and soups to steaks. Each offers step-by-step instructions, and the options include favourites and mid-week go-to dishes such as omelettes and pan-fried fish. 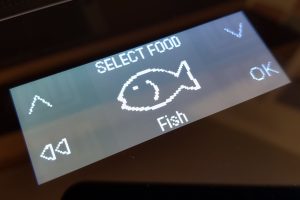 Special features include Active Heat, which divides the entire surface of the hob into four separate cooking zones. Each zone is simultaneously activated at a different pre-set cooking level and allows the user to move pots and pans from one zone to another, without the need to adjust the power levels or settings. That sounds ideal for a big Sunday roast with lots of saucepans on the boil and baking trays keeping warm on the hob top.

Unlike the very similar Whirlpool SMP 778 C/NE/IXL, the Hotpoint’s glass top is thicker, so doesn’t sit quite so sleekly on the worktop. Nor does the working surface have the Whirlpool’s super-tough iXelium coating.

As such, you’ll need to be a little more careful when using and cleaning the Hotpoint to ensure its glass surface remains buffed and scratch-free for years to come. Since the Hotpoint comes in a fair bit cheaper, we’d go for the being careful option. 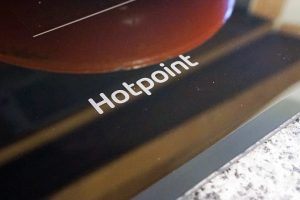 The Hotpoint’s two LCD screens making using such a complex and well-featured hob remarkably easy. You simply select the relevant zone, or multiple zones, on the left-hand screen and the slider power control is a single sweep of your finger for all linked zones.

To adjust when in use, you touch the relevant zone on the panel and then use the slider. Going to the far right of the slider and then pressing the “+” key puts the zone into Boost power mode for speedy heating.

The controls are fairly responsive and the LCD screens are nicely sensitive, requiring just a light button press. There was a little lag on the slider, meaning if you wanted to skim through all 18 settings to get to the higher power levels you might need a couple of slides. Overall, the touch controls were just a little shy of perfection in their responsiveness, but not enough to detract from the otherwise simple basic operation. 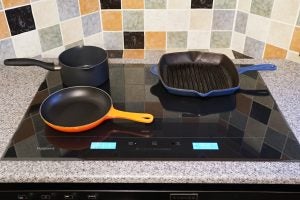 The right-hand screen lets you dip into the Hotpoint’s copious menus. The combination of a small display and lots of menus and information to delve into isn’t necessarily the best of combinations. Information and options are plentiful , and they can take a little finding at first. Yet Hotpoint has managed to make the menu structure fairly intuitive and it’s littered with helpful graphics, so we got the hang of it in no time.

More than 60 recipes with cooking instructions, methods of firing up the whole cooking area to heat any pan, anywhere you place it, and turning it into a more traditional four-zone hob are all available from the menus after a little rooting around.

The TotalFlexi/ActiveCook headlines are a fancy way of saying that this hob has eight burners that cover the whole cooking area, and there’s virtually no limit in how they can be used, linked together or the temperature at which you set them(within the AVP 778 C/BA max 7400 watts anyway). Granted, induction hobs don’t get much more flexible than that. 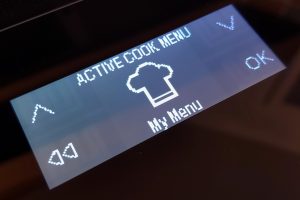 When the novelty of the comedy fish symbol wore off, we were big fans of the dessert category that offers full instructions on custard, panna cotta, melted chocolate, pancakes and rice pudding. Did someone say “diet”?

Okay, all these cooking recipes and instructions could well end up as more of a novelty than a day-to-day feature for many, but they’re nice to have, fun to play with when you’re after some inspiration, and don’t detract from what is a great-looking, well-featured hob anyway. 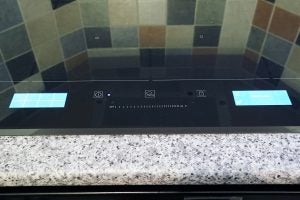 Throughout testing and trying a range of different cooking functions, the Hotpoint stayed nicely peaceful in use. There’s the usual buzz and hum of the induction zones working, and cooling fans beneath when things get hot after extended cooking, but both noises are kept at an unobtrusive level throughout. Being Schott Ceran glass, cleaning was relatively easy and the surface buffed up well after use.

As we can see from the thermal imaging, Hotpoint has used oval burners with flattened sides (more like a running track shape) and packed them together in two lines of four, left to right.

There’s very little space between them, not a big hole in the middle, and the cooking area covers most of this lush-looking 77cm-wide hob. As with all large hard-wired 230v induction hobs, maximum power is 7.4kW. So, while you can’t use all eight burners on full power at the same time, the Hotpoint manages the power to all burners relative to your settings. 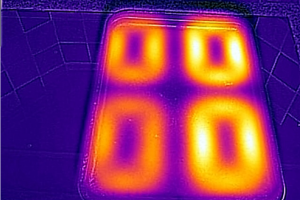 Using the Boost mode, displayed as “P” on the power display, we placed our smallest 17cm pan containing 1-litre of water on the far-right burner for no particular reason. All eight burners are identical, so you’ll get similar results wherever the pan is placed.

This test saw the water reach our target 90ºC in 4mins 15secs while putting 1.9kW of power into the pan. That is a good if not super-speedy time for this test.

With the eight burners all being relatively small compared to the bigger, single-round burners you get on basic four-zone models, there was always going to be a slowdown in heating ever larger pans with more water.

Sure enough, our mid-sized 19cm pan with 1.5 litres of water also drew 1.9kW and took around 5mins 30secs to reach 90ºC. The larger base on the 21cm pan did allow the burner to reach its maximum 2.0kW output, raising the pan’s 2 litres of water to 90ºC in a fairly lengthy 7mins 15secs. 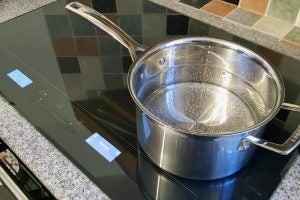 Getting creative, we spanned two zones with the large pan and ran the test again. Since the pan wasn’t quite large enough to cover both induction burners, it could only take 1.5kW, which took the 90-degree time out to just over a lifetime. Well, more than 10 minutes – where we lost interest.

That result does counter Hotpoint’s idea that you can place a pan absolutely anywhere on the hob surface to some extent. Yes, you can and it will work, but it will work at its best if you get the pan centred over one of the eight zones. No such issue using our large square griddle tray or big cast iron skillet, though. These bigger pans covered the burners very well and the close-packed burners gave exceptionally even heating across the base.

On a big tray, we linked four burners and found the temperature control to be precise and uniform across the pan, making for very good cooking results. If you like your hob-top griddling, searing tuna or pan-frying fish, this Hotpoint is a real winner.

Elegant, flexible and packed with features, the ACP 778 C/BA is a superb hob with premium features at a frankly, not too premium price. We have certainly tested pricier hobs that don’t pack in the eight-burner convenience, touchscreens and recipes of the Hotpoint.

Heat-up times and evenness of pan heating are very good for small pans and huge skillets, but the multiple smaller burners do mean mid-sized round pans can take a little while. Touch control response was just a little disappointing – it’s about 95% there but, occasionally, there was a little lag on the slider control that would require a second press.

If you’re looking for a big hob that impresses visually, works well and is packed with more fun features than one could probably use, all at a not too eye-watering price, then the Hotpoint is a great buy.