Hotline Miami 2: Wrong Number is going to get stick. Critics aren’t going to slate it because it’s violent; that’s part and parcel for this series. They aren’t going to cane it because it’s not fun to play – because the opposite is actually true. They aren’t even going to give it a kicking because it has a rather nasty opening scene in which it appears a female character is about to get raped, and even though she doesn’t, you have to wonder in the wider context of the game’s David Lynchian plot whether such a horrible scene was either necessary or warranted.

No, the reason Hotline Miami 2: Wrong Number is going to get stick, or at the very least, a lower score than its predecessor is because it’s not its predecessor. When the original Hotline Miami was released back in 2012 it was lightning in a bottle. Here was an indie game that hearkened back to an old school coin-op aesthetic that roped in retro crushes and music trends, offered no quarter in the difficulty department and stood out like a beacon in the mist against the homogeneous offerings being poured off the gaming  establishment’s big-business-model conveyor belts. It was the smartest, savviest punk game released in 2013. 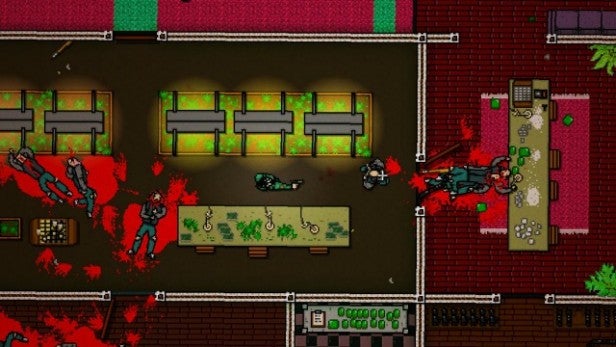 It was kind of reminiscent of the original Portal. You remember Portal? The game Valve released that caused the gaming world to flip out, print T-shirts and sidle up to one another and intone, “The Cake Is A Lie”? And then they brought out a perfectly brilliant sequel that surpassed the original in a lot of ways, but, because the basic premise was the same and it didn’t have the shock of the new, critics and players alike were of the opinion it wasn’t anywhere near as good as the original Portal?

Yeah. So, Hotline Miami 2, right? Not the original. Funny thing is, even the developers can see the comparatively lukewarm reception coming. This may be why they created a series of characters in the game that are meant to mirror the sort of player and critic who is bitching about the fact that Hotline Miami 2 ddoesn’t feel as fresh as the game that came before it. 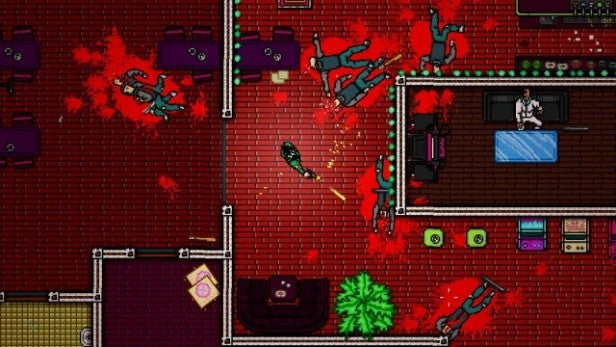 In fairness, Hotline Miami 2 is not lightning in a bottle, but it is a very good sequel to a very good game.  Many of its predecessors strengths and weaknesses have been carried over to it. It’s still the same spring-loaded deathtrap with moving parts the original was. Players need to guide a murderous ne’er-do-well through a series of levels where some enemies are moving on set patterns and others are free-roaming. They have a series of masks that give their protagonists certain powers – lethal throws, dodge rolls and more.  They’ll once again be faced with endless frustration since death can come swiftly depending on whether they mistime a move or forget to scout the corridors ahead.

Sometimes Hotline Miami 2: The Wrong Number feels positively unfair; a series of well-timed – and in some cases, painstakingly researched – attacks can still end in failure just because the level design has decided on a change-up. Checkpoints aren’t completely merciless, but they are rat-bastard brutal. This means when you finally beat a level, the most heaven-sent sense of release is almost a natural by-product. That, and a colossal sense of achievement – even though you know deep down, your victory had as much to do with luck as it did to do with your own skill and sense of timing. 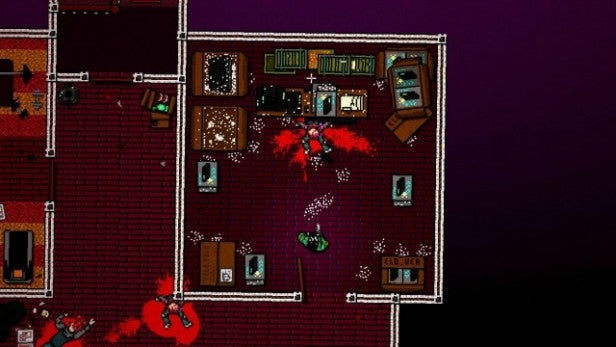 The plot throws players a few curveballs, although story was never Hotline Miami’s strongest aspect. The sequel borrows the overall atmosphere of the first game for its narrative; characters spit disjointed spurts of dialogue at each other and a lot of the time, the player may feel like they’re listening in on a drug-fuelled haze than integral parts of a story they need to pay attention to. Hotline Miami 2’s narrative is jumbled up and shattered. The plot zips back and forth across timelines and occasionally the narrative of certain characters intersects, although the plot never feels hefty enough to pay any real attention to.

What it does do, is divide the player’s time between a pretty large cast of characters, all of whom wear masks that confer abilities, but there isn’t the option to mix things up once the entire game has been unlocked. Hotline Miami allowed players to revisit levels with its protagonist, Jacket, and allowed them to pick different masks that made their approach to each level seem fresh once again – it wasn’t a huge departure, but the edge they took into the level differed. In Hotline Miami 2, players just don’t have the same amount of choice – and thus, replayability. 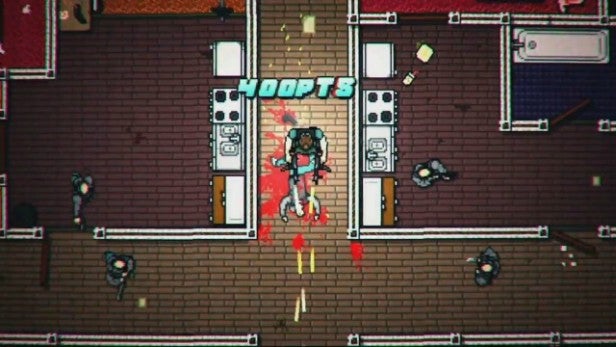 At least, in terms of basic mechanics, but one of Hotline Miami 2’s strengths is the fact that its sick, pastel-shaded world warrants repeat visits, if only to soak yourself in it again. For all that it’s a top-down minimalist presentation, Hotline Miami 2 feels rich and  twisted; it’s like Jason Voorhees wandered into an episode of Starsky and Hutch by mistake. Oh, and the quality of its soundtrack surpasses that of the original completely. Here’s hoping it pitches up on iTunes in short order.

Verdict
So is it worth playing? Definitely. Will it shock and awe players? Only those who are coming to this series for the first time. It’s more of the same, but that’s no bad thing, and if you’re a returning player to this franchise, prepare to be frustrated, enraged and enthralled all over again.