What is the Hori RWA?

The Hori Racing Wheel Apex (RWA) is a gaming wheel for those who can’t quite justify such an outlay of £100-plus on the enthusiast kit from Logitech and Thrustmaster, In fact, you could easily spend more than £500 in this field if you want a fully decked out racing rig.

In addition, the RWA is a wheel for casual and arcade racer fans, not racing-sim enthusiasts. If you fall into this latter category, then spending the extra on the Thrustmaster T150 or Logitech G29 won’t be a waste. 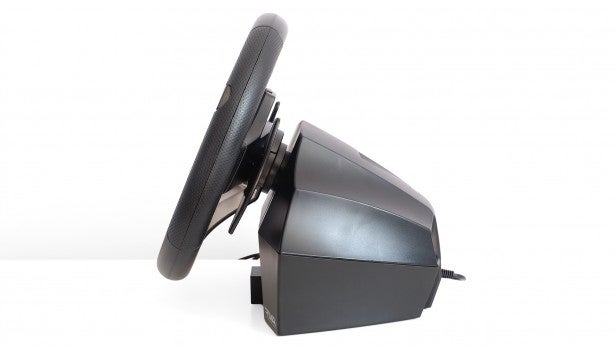 Whether or not you find the Hori RWA toy-like will depend on your perspective. Coming from the Fanatec Elite CSL, the Hori RWA feels small and slight. It’s certainly smaller than most £100-plus models.

However, it’s one of the most solid non-force feedback racing wheels I’ve yet to use. It’s made of decent-quality plastics and the parts of the wheel you hold are rubber, similar to those on the Thrustmaster T150. 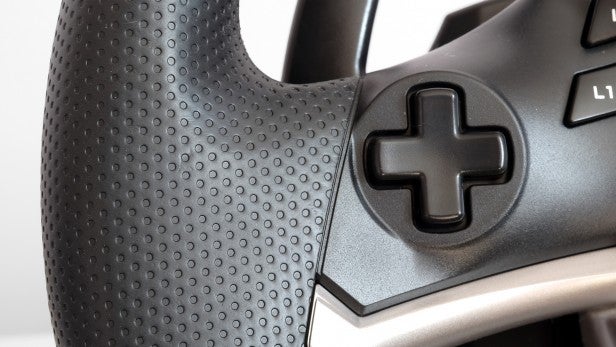 The Hori RWA is a wheel for PS4, PS3 and PC, and it mimics the controls of a PS4 pad better than some other wheels. This isn’t simply down to placing high-quality buttons across its front, though.

As you can see, the Hori RWA doesn’t have any analogue sticks. However, its D-pad can be made to emulate either of the PS4 sticks. You don’t need a controller on-hand to navigate menus.

Typical of Hori, the buttons are of a high quality. The D-pad is slightly spongier than that of the DualShock 4, but it still feels decent – and you won’t need to use it all that much anyway.

There are even a couple of buttons on the wheel itself – L2 and R2 – plus two modes that let the Hori RWA flick between being recognised as a gamepad or a wheel. If one mode feels a little odd in a game, it’s likely that other one won’t. For a wheel with relatively simple tech, there’s plenty going on here. 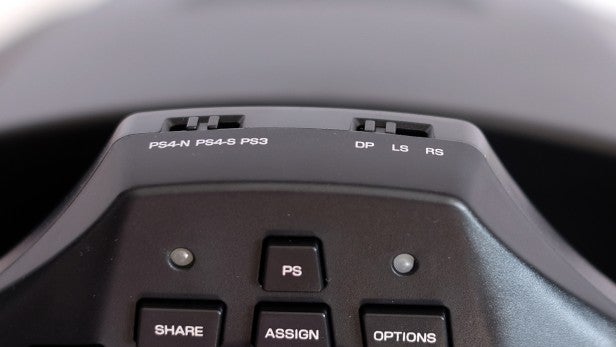 There are two options for attaching the wheel to a table or wheel stand. Sucker pads stick to the underside of a surface, or there’s the familiar plastic clamp. Most times, you’ll want to use the clamp. It works perfectly well, stopping the Hori RWA from moving around at all when I fixed it to a wheel stand. It isn’t as solid as, say, the Thrustmaster T300 RS’s clamp – but it doesn’t need to be, since the tension of a non-force feedback wheel is so much less.

So while the Hori RWA isn’t as fun to use as a good force feedback wheel, then, it feels a lot less high-maintenance. It doesn’t require a power adapter, for example, and is happy to be powered by a PS4/PC’s USB port. I did run into trouble using a USB extender cable, which made the wheel disconnect when its rumble motor was maxed-out. However, this is likely down to the extender cable being picky about carrying enough current, rather than a fault with the wheel itself. 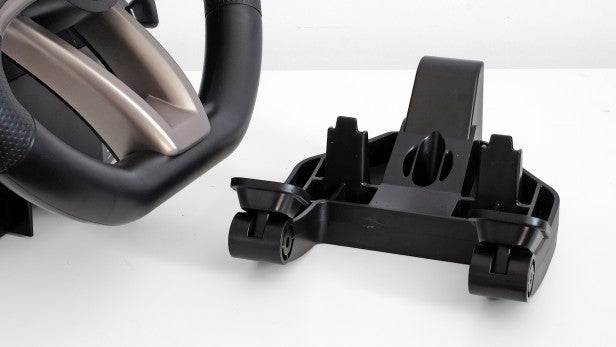 The big question for prospective Hori RWA buyers is whether it’s worth spending the extra on an entry-level force feedback wheel such as the Logitech G29 or Thrustmaster T150. If you spend hours a week playing Project Cars on PS4, or iRacing on PC, it probably is.

The Hori RWA isn’t a model that emulates the forces of a real-life car wheel – for example, when the tyres are about to lose grip on the road. It’s very much an arcade-like wheel.

What the Hori does have is a ‘rubber band’ or bungee action inside that makes the wheel correct itself – plus it adds consistent resistance to turns. 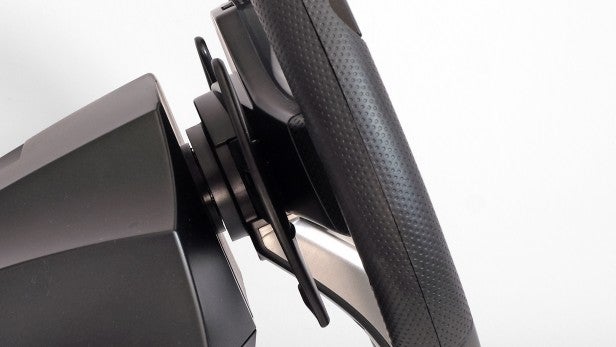 Then there’s rumble, similar to what you might feel in an Xbox One pad. In DriveClub, you’ll feel a rumble as you accelerate, as you hit the side of the track, and as you enter a slide – much like gamepad rumble.

The difference is that the Hori RWA is more powerful, delivering deeper feedback than felt with a gamepad. Its rumble motors are behind the centre of the wheel, and the sensation is definitely a rumble rather than a weak buzz.

Switching to MotorStorm: Pacific Rift on PS3, the experience is much the same. There’s plenty of almost subwoofer-like rumble when you smash your car into a giant rock. It may not add the level of immersion of force feedback, but it’s fun nonetheless.

What the Hori RWA lacks is that sense of connection with a car, something a force feedback wheel can provide. As I’ve intimated a few times already, this is more an arcade-like wheel than models produced by the likes of Logitech and Thrustmaster  – aside from the similarly low-end Thrustmaster T80, however. 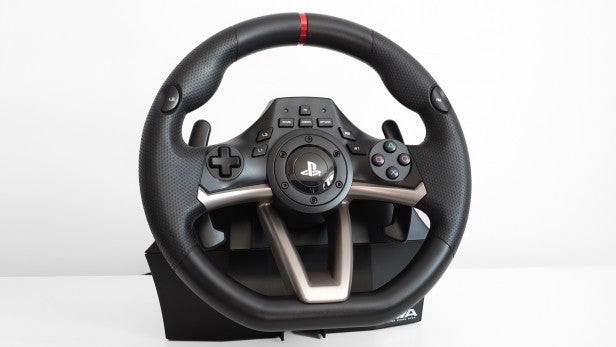 Given the breezy style, I was slightly surprised to see the level of customisation on offer. Using a series of button gestures you can alter the dead zone, the sensitivity, and toggle rotation between 270 and 180 degrees. 270 degrees is the full rotation limit of the wheel, which is  limited compared to the 900 degrees of the Logitech G29 and the 1080 of the Thrustmaster T150.

Some games don’t feel right until you’ve tinkered with the settings, either. Where the most popular wheels are often recognised by games, switching automatically to a profile to suit, some fiddling will be required with some games here. That said, DriveClub and Project Cars work just fine.

Several of the buttons can also be remapped: the pedals and the buttons on the wheel itself. This means you can play a game without the pedals if you like, making those L/R buttons the accelerator and brake. It might not be a bad idea for ultra-arcadey racers.

Behind the wheel is a pair of paddle gear-shifters. Higher-end wheels almost always use aluminium spokes for these, where the Hori RWA has fairly flimsy plastic ones. It’s the only bendy plastic you’ll find on the wheel, actually.

Some will turn their nose up at these, but they feel fine since there’s a very definite click when they’re depressed. Ultimately, they feel rather similar to better-made shifters, a flimsier take on the same idea.

The Hori RWA pedals are simple. On a very small plastic base sit two all-plastic pedals, your accelerator and brake.

There’s much less resistance than the pedals of the Logitech G29. Both are very easy to depress and are by no means realistic. However, the brake is at least slightly stiffer than the gas pedal. Like other wheel sets, the pedals plug directly into the wheel base, and so don’t take up an extra USB port on your PS4. 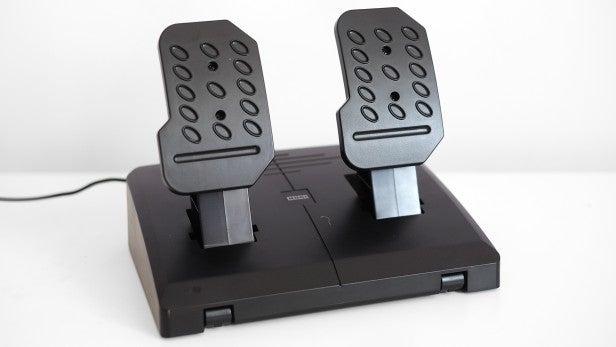 They’re fairly poor pedals by the standards of force-feedback wheels, worse even than the simple Thrustmaster T150 pedals. They do the job, though.

The underside panel of the Hori RWA pedals also flips out to give your feet something to rest on. Initially I thought this seemed a pointless, but it actually helps keep the pedals in place because you’re no longer just pushing the pedals away from you. The weight of your heel helps to keep them in place on carpet. 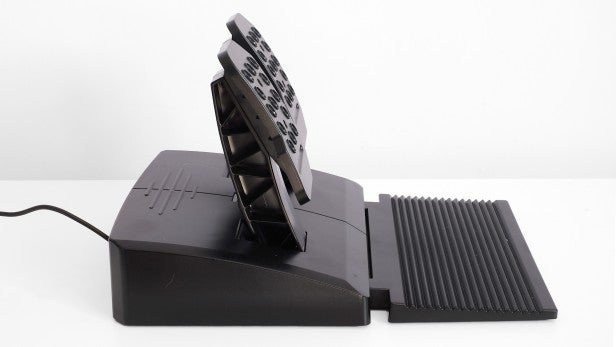 Should I buy the Hori RWA?

Hori has succeeded in producing a non-force feedback racing wheel that, for some people, will be worth buying. It’s solidly made, highly customisable, works well with the most popular racing games, and its rumble feedback is a reasonable, if thin, impersonation of the feel of force feedback.

However, it’s important to be aware of exactly what you do and don’t get here. Force feedback is an essential part of the full video game racing experience, and it’s absent.

It may shave some seconds off your lap times compared with a pad, but using the Hori RWA isn’t as immersive an experience as it is with the Logitech G29 or Thrustmaster T150. Instead, this is a direct alternative to the Thrustmaster T80 – which, until now, has been the main budget racing wheel option.

The Hori RWA is a great alternative to that model, but if you can afford an extra £40 then the Thrustmaster T150 offers a far better experience; the superb level of force feedback is worth the cost.

This is one of the very best non-force feedback wheels on the market – but rumble doesn’t replace force feedback.