When you die in HoPiKo, you don’t just have to replay the level you died on, you also have to take on the entire batch of levels that came before it again, too. At first, it’s a decision that seems like a mistake: mobile games have long got used to the idea that players are short on time and want to dip in and out at their leisure. The idea of taking on levels they’ve previously played again and again just because they’ve come a cropper later on seems positively archaic.

It soon becomes clear, however, that this is an intentional handicap by Laser Dog. It’s an effort to separate the wheat from the chaff amongst its fans, if you will. Like an arcade classic of old, HoPiKo is a game that takes no prisoners. Luckily for us, so immediate is the gameplay, so damn addictive, that going back over old ground again and again feels like a fitting punishment for failure, and one that makes success when it comes seem all the sweeter. 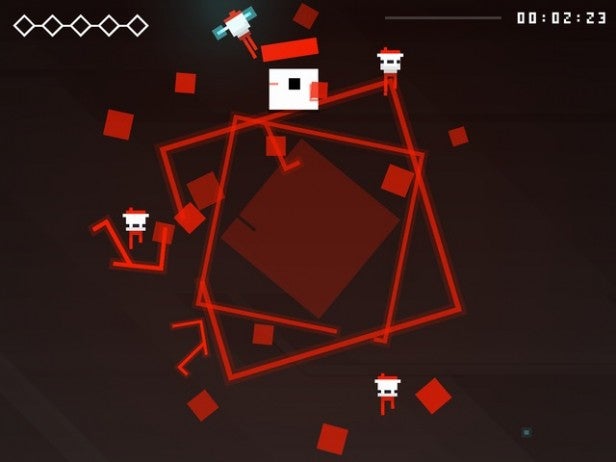 It also helps that the basic premise behind HoPiKo has been intentionally designed to appeal to the kind of ‘hardcore’ arcade gamers that will lap up the game’s short and sharp action. Your job is to set about eradicating a computer virus that’s taken hold of your favourite games console – a machine that looks suspiciously like an old NES unit during the game’s opening cut-scene. Doing so, at least initially, is a question of jumping between platforms set at all manner of angles before rescuing the good guys, trapped in a sort of red, blocky and typically digital forcefield.

The big catch, however, is that you have just a few seconds to make each jump. Leave it too long and your little guy will explode into a million pieces, sending you right back to square one. Likewise, get your angles wrong and fire off in an odd direction and you’ll suffer the exact same fate, making each and every level one packed full of instant judgements and on-a-knife-edge reflexes.

It’s lucky, then, that the controls are especially simple to grasp. Holding your finger down anywhere on the screen will charge your HoPiKo up. In the few short seconds you have, it’s your job to slide your finger in the direction you wish him to fire, with the game drawing out a small arrow to let you know which way he’ll head at any given time. Then all you have to do is let go of the screen and hope for the best. With several platforms making up each stage, success in HoPiKo is a multiple case of rinse and repeat, with every move carried out at lightning speed. 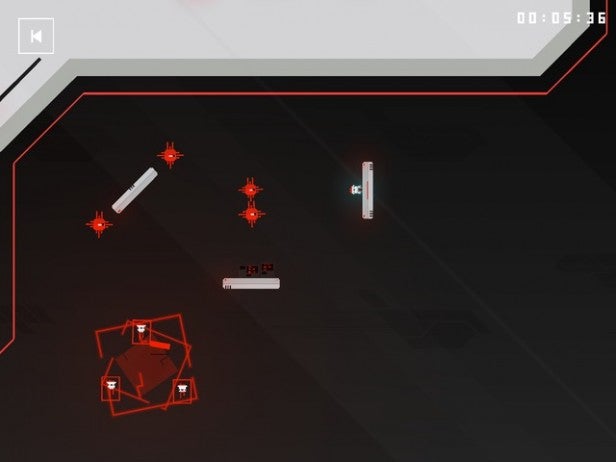 There are other distractions along the way, however. Along with different kinds of moves that are later filtered into play, new songs in the game’s (frankly brilliant chip-tune) soundtrack are actually unlocked not as you progress to new batches of levels, but within the levels themselves. Little MP3 players pop up every now and again that are designed to take you slightly off course, but when captured bring with them a brand new tune, each one just as catchy as the last.

It’s an inventive way of doing something very simple that most developers would overlook, yet it serves as the perfect symbol of what HoPiKo looks to do from the start: a game that, on the surface, could have come out 20 or 30 years ago, but one that adds the odd fresh touch here and there to bring play into the 21st century. It’s this link back to games of old, however, particularly when it comes to HoPiKo’s difficulty level, that really stands out. The decision to make the game utterly unforgiving of failure will, no doubt, alienate large amounts of mobile gamers, many of which will close down and uninstall HoPiKo after a few failed attempts.

Indeed, it could easily be argued that the game’s one weakness is that it doesn’t explain itself especially well in its opening few levels. Success in HoPiKo requires perseverance, even when, unlike leagues of other mobile games, every indicator is telling you you’re a bit rubbish. It’s that old school approach to gaming – get better or die trying – that makes HoPiKo really stand out. 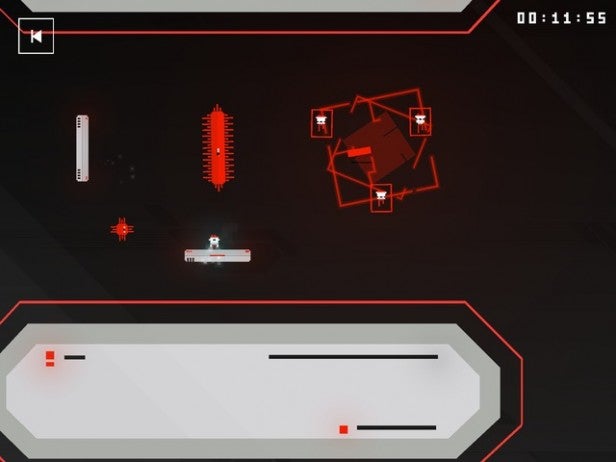 When every other game on earth rewards you for no reason whatsoever, handing out trinkets aplenty for winning a tutorial contest, or simply sticking with it, having a title that only honours talent and ability is refreshing. Just be warned, if you want to come out on top in HoPiKo, you’ll need to have that talent and ability in spades.

Verdict
Utterly old school in all the right ways, HoPiKo’s punishing set up may alienate more casual gamers, but it’s a glorious celebration of reaction-based arcade play of old, with a superb soundtrack adding to a game with an unashamedly retro ethic.