The trouble is, you might spend a lot longer cleaning than planned.

The main floor-head has the typical low-cost cleaner habit of sucking itself down onto carpet and becoming difficult to move, even though it is relieved slightly by the rear wheels on the head.

Those rear wheels have their own issues too. Push down hard to move the head on carpet and the head pivots upwards around the wheels, pulling it away from floor. This has the effect of releasing any suction-based resistance completely. Often this will see the floor-head – followed by the user – jettisoning forward across the living room until the head falls back to the carpet and sticks down again. 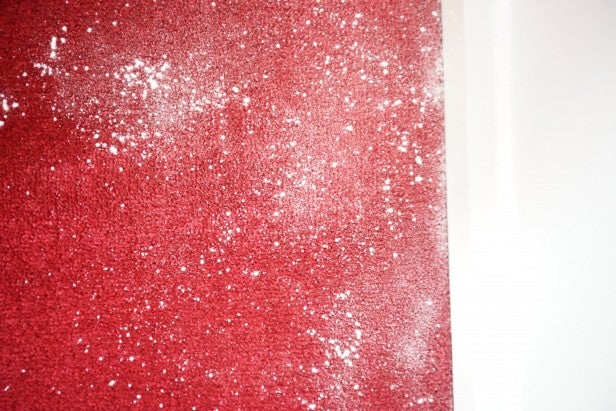 This is a real shame since this Hoover provides plenty of suction power and good airflow. In our carpet test, the vacuum produced very good cleaning results, with excellent edge cleaning too. Unfortunately, what the image doesn’t reveal is the sheer effort that went into that one pass sweep, or the time it took – both of which were much higher than ideal. 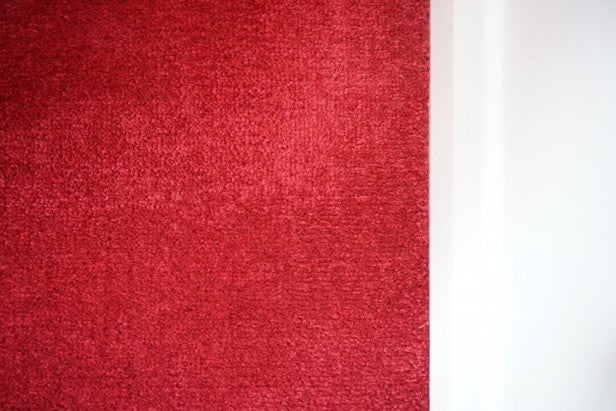 Despite this cleaner’s A-rating for hard-floor cleaning, its performance here also suffers quirks. General fluff and debris pick-up is excellent thanks to the high airflow and wide mouth inlet on the floor-head. Pick-up from deep into cracks and crevices is decent too.

However, the drop-down bristles on the main combi floor-head sweep a lot of particles in front of the head, depositing them on the backstroke. Moreover, the rubber blade at the back effectively makes the backstroke pointless, as it comprehensively scrapes dust in its path rather than letting it pass into the cleaner.

Add in the dumpy crevice tool and ineffectually small dusting brush, and this Hoover’s tool lineup is pretty poor all round.

Having seen some woefully short mains cables of late, we can only raise minor critique of the 4.9m cable attached to the Whirlwind. However, it does retract neatly into the body with a press of the chunky red button on top.

The length of the cable is right on the borderline for our stairs. Using mains sockets on the ground and first floor we were just about able to cover all the steps in-between.

The Whirlwind is relatively light and easy to carry as you go along, although its rounded rump-end means it doesn’t sit well on steps if placed on its end. You’d be far better off placing it flat down, and reach further to pick it up again.

On our carpeted steps, the main floor-head produced a mixed bag of results. With the slide vent on the handle open, the head did move relatively freely. Equally, it would sometimes tilt itself up away from the floor, requiring a little handle jiggling to get back down. Cleaning results were passable when the head was on the floor, thanks to the high suction power and compact size of the head, despite having the slide vent open.

Once again, the good suction and high airflow of the cleaner itself is rather stymied by the basic tools. On hard floors, the multi-purpose floor-head is at its best, happily pulling in stray hairs and fur balls on tiles, lino and parquet. Yet the same problem pervades in that the front brushes tend to push hairs away rather than sweep them in – and the rear blade does little to help.

The overall performance for pet hair clearing on hard floors is quite good, but expect to go over the same area a few times to capture all the stray whiskers. 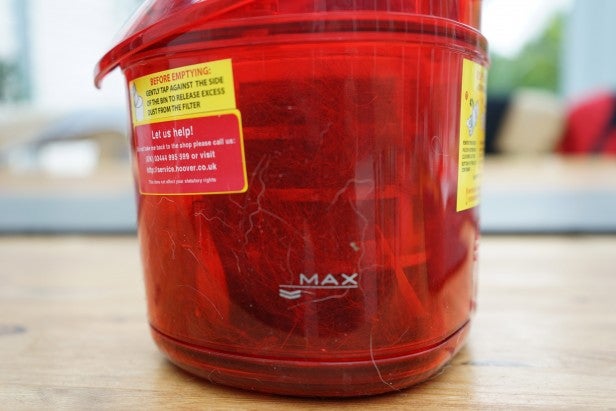 Results were pretty similar on carpet, although the repeat sweep count and time taken to clear the test patch of hair was even higher. On a 30cm patch of nylon carpet with mixed Collie and Labrador hair, it took a lengthy 25 seconds to get the area clean – and then we had to detangle the brushes at the front of the floor-head. Pet-hair cleaning certainly isn’t the Whirlwind’s forte.

Moreover, the pet-hair cleaning test revealed a gap between the bin and the hose, which ejected quite a few hairs into a little space between the cleaner’s front plastic moulding and the bin itself (pictured).

On closer examination, it was possible to actually see the gap where a rubber seal falls a millimetre or two shy of resting solidly against the bin. Whether this is a design fault or just an issue with our sample we can’t say – but it’s certainly worth examining the seal at the business end of the cleaner before you buy. 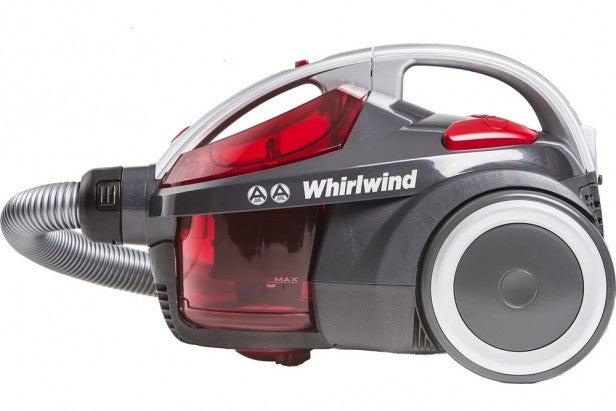 Should I buy the Hoover Whirlwind SE71?

Solid suction power and good eco-credentials justify the Whirlwind being a genuine Hoover, but at well over £100 retail there are better-performing cleaners on the market.

It’s noisy, the tool choice is limited, and a strong arm is required on carpeted floors to produce the top-class results you see in our tests images.

With potential quality control issues also letting the side down, this far from the finest vacuum cleaner to bear the Hoover name.

Good basic performance but noise, poor tools and mediocre usability let it down.