What is the Hoover DXA48W3?

This is an 8kg maximum load machine with 1400 spin speed, offers sensor washing to adjust water, electricity and time according to the weight of your washing and offers a good selection of programmes for day to day use. Let the washing commence.

This Hoover wins brownie points for installation with a relatively shallow depth front to back of just 54cm. While ideally your plumbing and water valves should be in an adjacent cupboard, limited space often means the pipework is behind the machine, making deeper machines stick out from the worktop. 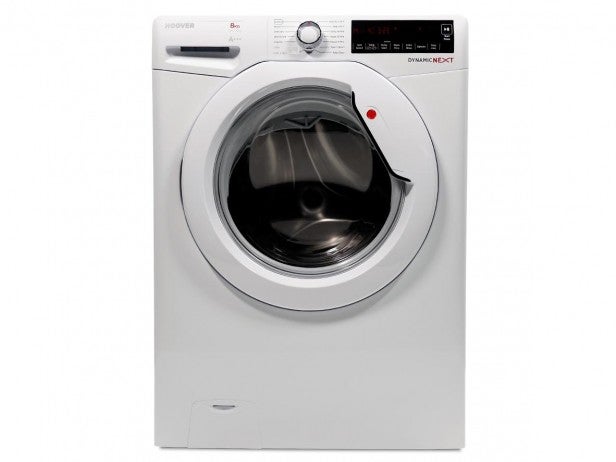 The DXA48W3’s operation is just as practical too. It offers sensor washing, which adjusts water, energy and washing time relative to the amount of washing you have put in. It’s not quite the full-sensor experience of premium machines that analyse how heavily soiled the wash is too, but this feature goes a long way to helping it achieve that A+++ rating.

Fancy technology includes an inverter motor for quiet and efficient running, and a Dynamic drum action that tips washing front to back of the drum, as well as rotating in both directions, for a better wash. These features are unusual and a real bonus on a washing machine that is this affordable.

This Hoover jazzes up the traditional rotary knob programme selector with touch button options and a bright red LED display showing key times and stages of the wash. The LED is not as crisply illuminated as those found on premium machines, but it certainly does the job. The knob dial clicks around positively but we did find the little red position marker difficult to read from above when selecting the programme to the far left or far right of the dial.

The large porthole door is mounted high up and has a handle nearer the top, both of which make opening and loading easier. Where the door cuts into the control panel design, this has somewhat reduced the real estate available for the soap drawer, which is on the small side. If you use drum-balls and other trendy ways of getting your detergent into the wash, this won’t be a problem, but we found loading powder and conditioner into the tray a little fiddly.

No such trouble with loading the washing through the large opening door and into the shallow drum. The limited depth does give the illusion that the drum is fuller than it really is, so it will be worth weighing out an average wash to make sure you are using most of its capacity – and 8kg is a whole lot of washing. 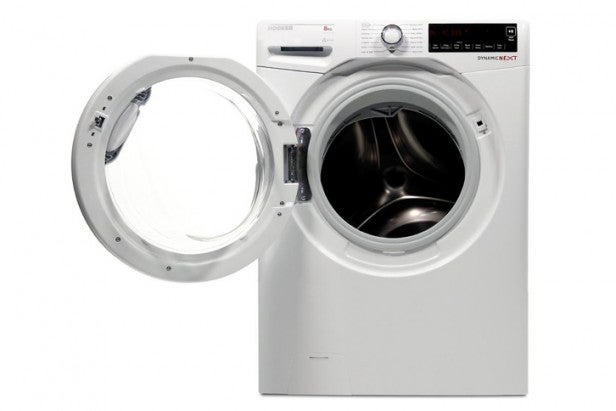 Well, not as noisy as the energy would have you believe. In something of an anomaly, our test results were a long way off of the numbers stated on the energy label. Even more unusually – for the better. While the label states wash noise at a fairly noisy 60dB, we consistently measured 58dB average wash noise. While that is not anything like the whisper quiet noise output of top-spec machines, its par for the course at this price point. 60dB is about the same level as conversation speech, so at 58dB the DXA48W3 will get heard but not butt-in and drown you out.

Things got more adrift in the spin speed noise tests – so much so we sent our equipment back for recalibration before repeating the test. The energy label for the DXA48W3 states a rather intrusively noisy 81dB for the noise level on the maximum 1400 spin speed. That is up there with the noise of powerful upright vacuum cleaners or a sink waste disposal unit.

In reality, we only measured around 75dB on maximum spin which by the way the dB scale works (its logarithmic for those with a penchant for maths) that is a great deal quieter than stated. 75dB is around the sort of spin noise we would expect from mid-market machines (around £500), so this is a great result for the Hoover.

Hoover DXA48W3 – What programmes does it have?

With the key Cottons wash highlighted at the top of the dial, you get eleven other programmes. These cover the usual bases of Mixed, Delicates, Wool and Shirts with a slightly more unusual Lingerie wash and one dedicated to Dark Colours. For those time-pressed there is a choice of three high speed washes in 59 minutes, 30 minutes and a super quicken freshening up wash in the rapid 14-minute programme.

For those with small children there is a higher temperature 60 degree C wash to get baby clothes extra clean and free from potential bacteria and allergens, and Hoover’s ActiveEco wash. This runs at just above incoming cold water temperature of 20 degrees C to reduce energy requirements of heating the water. 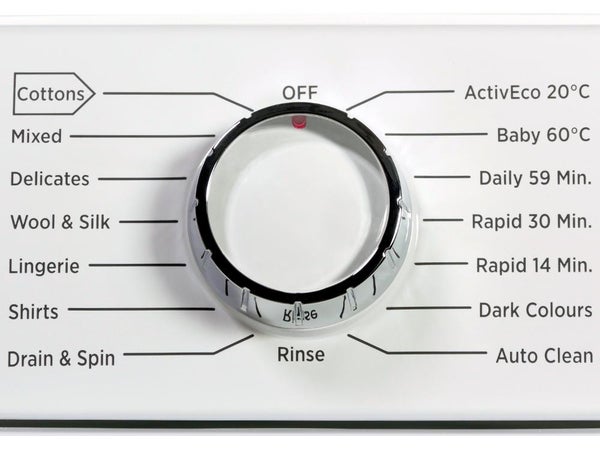 While each programme has a default spin speed and temperature, these can be adjusted to suit your wash if required. In addition, you get a delay start timer so you can have the washing finish as you come home or run it overnight if on cheaper-rate night time electricity. There is the ability to add extra rinses for those sensitive to detergent and an easy iron mode that aims to reduce creasing by using less aggressive wash and spin action.

A suitably large start/pause touch button is highlighted on the far right of the touch display, making this a nice and simple machine to use throughout.

We run three wash tests as standard to replicate how most people in the UK use their washing machines most of the time. That is a full load cotton 40-degree wash, half load cotton 40 degree wash and a half load cotton wash on the machines ‘Eco’ setting or programme. We use 80% and 40% of maximum stated capacity as full and half load, again representing how machines are typically loaded.

A test stain strip featuring dried-on ketchup, coffee, turmeric, engine oil and blood is placed in the full load along with a leading non-bio detergent. After these three washes we are knee deep in drying laundry – but we struggle on to look at the test strip, examine energy and water used, and look how much water is left in the load after the spin.

The Hoover turned in a very respectable performance in cleaning our test stain strip, easily on par with other A-rated machines around this price point. Using non-bio powder makes cleaning much more of a challenge for the washing machine but the DXA48W3 did a pretty good job on the stain strip, removing the great proportion of the substance and its stain. Even the tricky engine oil and turmeric stains were significantly reduced. Results on the stain strip were nearly as good in Hoover’s ActiveEco mode, showing that it is washing action rather than the heat of the 40 degree wash that takes the washing credit.

Like many machines in this price category, none of the stains were removed completely but the Hoover did remove more of the residue than many we have tested at this level. If you use biological powder, the DXA48W3 is likely to produce a very good clean all round. Timings for all washes were fairly long, which is to be expected with high efficiency machines that use a lot of soaking time to improve wash performance.

Spin results were rather average for a 1,400 spin machine, however. In the full load Cotton wash there was 2.5kg of water left in the load (39% of wash weight) although the half load results were much better at an impressive 0.7kg (22%). Clearly the shallow depth of the drum has an impact on spin performance with a big load of washing hanging on to the water much more so than a half load. We would expect around 30% water weight remaining for an A-rated spin machine at this price, so the results were much worse and much better than this depending on load size.

With its A+++ energy rating, it was little surprise that the DXA48W3 sips water and uses a trickle of electricity. In fact, we estimate it would cast just £26.24 a year based on typical usage. You can see all the test results in detail on the specs page.

The standard cottons wash on full load was the star of the show, using 0.75kWh of electric and a little over 45 litres of water cleaning our 6.4kg (80%) load of mixed cottons. As this is the programme most people use most of the time, that is a very good result indeed and easily backs up its A+++ efficiency claim.

Like many A+++ machines, the results are not quite so impressive if you move outside of this key Cottons/Full Load scenario. By halving the load to just 3.2Kg (40%) you only save a scant few litres of water and a few watts of electricity on the Cottons programme. Ensuring you make up a full load is by far the most efficient way of washing with the DXA48W3.

Switching to this Hoover’s ActiveEco mode made a much more significant reduction in electricity consumption, down to just over half a kilowatt, as the water only had to be heated a few degrees to reach the 20 degrees C wash temperature. However, water consumption remained about the same as a standard full load and, as the spin cycle is reduced to 1000rpm and shortened to save power, the spin efficiency was fairly poor at 50%.

Given the DXA48W3 offers exceptional efficiency with a full load but much better spin performance with a standard half load wash, gauging your washing requirement versus time available for drying will be a bit of a balancing act. If you have lots of washing and plenty of room and time for it to dry, then the DXA48W3 will reward you with very low running costs. 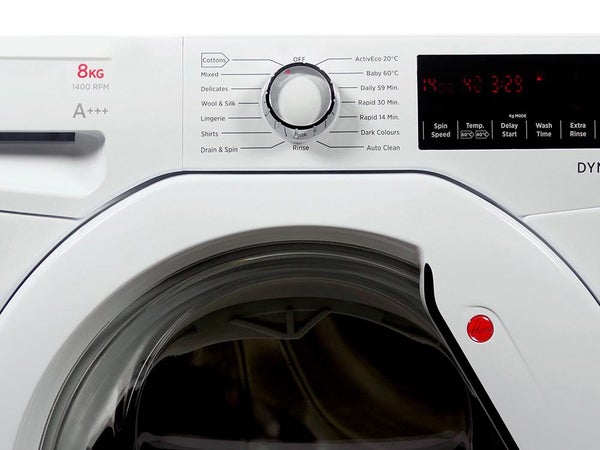 Should I buy the Hoover DXA48W3?

With a full Cottons load Hoover’s DXA88W3 can wear its A+++ rating with pride, offering good cleaning results and very low running costs if you stick to full loads. Spin efficiency could be better with these full loads, though, so ideally you’ll want a reliable place to hang washing rather than be relying on a tumble dryer.

There are also a few minor niggles operationally, such as the small soap drawer and slightly unclear dial markings, but at just £270 Hoover has produced an exceptional value, solid performing washing machine. For comparison, it’s also worth considering the John Lewis JLWM1205, which retails for a similar price but edges the Hoover on spin performance.

A low-cost washing machine offers good cleaning results, low running costs, and high energy efficiency. It’s not the most versatile machine, but ideal for regular large loads where washing is hung out to dry.