The substantial battery life, in conjunction with fantastic heart rate tracking and easy to understand workout routines available right there on the device, ensure that the Honor Watch ES is a great shout for any beginners and even some fitness enthusiasts on a budget. Honor scored a homerun with the Band 5, and now it’s done it once more with the Watch ES.

Well over a year ago, I reviewed the cheap but surprisingly feature packed Honor Band 5, and since then I have referred back to the device countless times as being the gold standard for sheer value for money amongst the best fitness trackers. Coming in at just £29.99/$39.99, the Band 5 packed in sleep tracking, an AMOLED display and a seven-day battery life (to name a few features).

The Honor Watch ES is a bit pricier at £99.99 (around $130/€115) but that’s still more affordable if you were to compare it to the likes of the Fitbit Charge 4. To know if Honor has struck gold yet again with its latest wearable, keep reading on for my final verdict.

In the case of the Honor Watch ES (and similar devices), it seems as though a new term needs to be added to the English language to accurately describe the style at play here. Larger than a fitness band, yet too small to be considered a fully-fledged smartwatch, the Watch ES feels more like a smartphone that’s been shrunk down to fit on someone’s wrists. It sounds daft, but that’s the best way to describe it.

The 1.64-inch display means that watch faces have a taller aspect ratio to work with, and while it looks out of place with traditional clock faces, the digital alternatives that pack tons of fitness info on the screen look fantastic. This is in part to the AMOLED panel featured on the device, which not only gives the UI a punchy, vibrant look, but it also ensures that whatever’s being shown on-screen is always bright and easy to read.

The only downside is that there isn’t an always-on feature, making it a tad tricky to get a very quick glance at the time without raising your wrist or pressing the wake button. 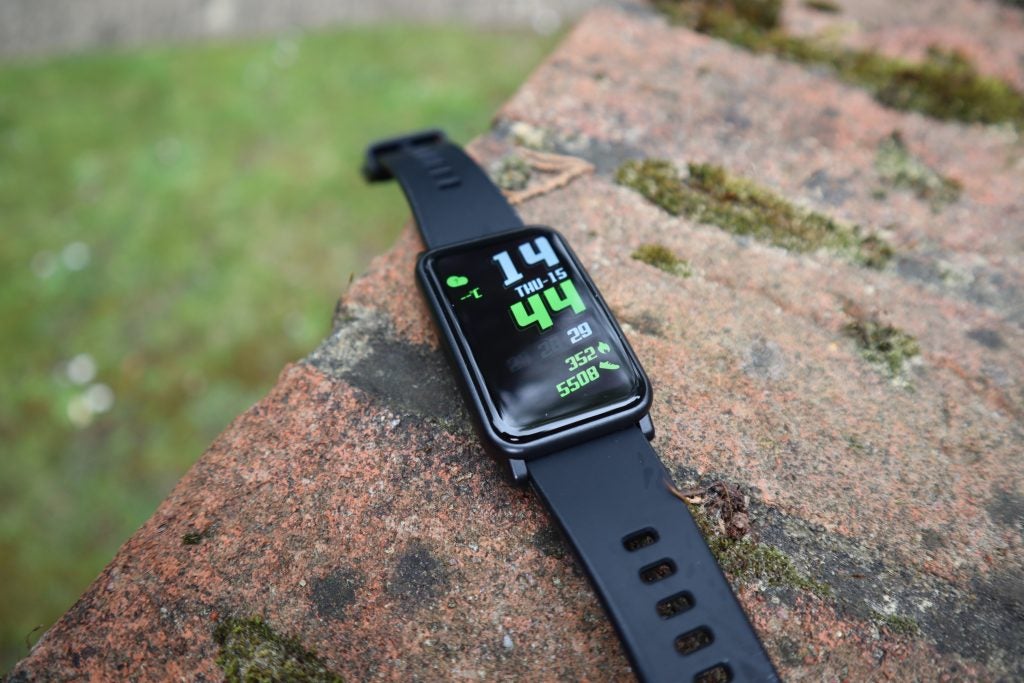 There are three different colour options to jump on for the Honor Watch ES: Coral Pink, Icelandic White and Meteorite Black (the last of which features in this review). All three are easy on the eyes, but I think the Coral Pink is noteworthy for having just a whisper of colour in its design, giving it some style without looking gaudy.

There’s only one physical button on the device – located at the midpoint on the right hand side, meaning that almost all interactions with the Watch ES are relegated to the touchscreen. It’s reminiscent of my experience using the Polar Unite, and it’s easy enough to get used to after a short time.

Just as it did with the Honor Band 5, Honor has shown yet again with the Watch ES that the company is the king of offering superb value for money when it comes to feature-rich wearables. The only major feature missing (presumably to keep the cost down) is untethered GPS tracking, and if that’s a deal breaker then you can always plump for the slightly more expensive Fitbit Charge 4, although I’d argue that you wouldn’t be getting a nicer wearable overall.

What it lacks in GPS tracking, the Honor Watch ES more than makes up for elsewhere. For starters, the device uses Huawei’s TruSleep tracking to keep tabs on your circadian rhythm, and I still find it to be one of the best sleep tracking apps available, with detailed statistics and helpful advice that can actually make a difference. I did notice however that the statistics provided weren’t always the most accurate, as the Honor Watch ES was unable to pick up a few instances of waking up during the night.

Being aligned to neither Tizen or WearOS, Honor’s wearable doesn’t have any third party apps optimised for it, but there are a few key smart features that are handy to have nonetheless. For instance, you can control music playback on the Watch ES, check up on the weather and even see your stress levels. It’s hardly mind blowing stuff, but it all nice to have quick access to. 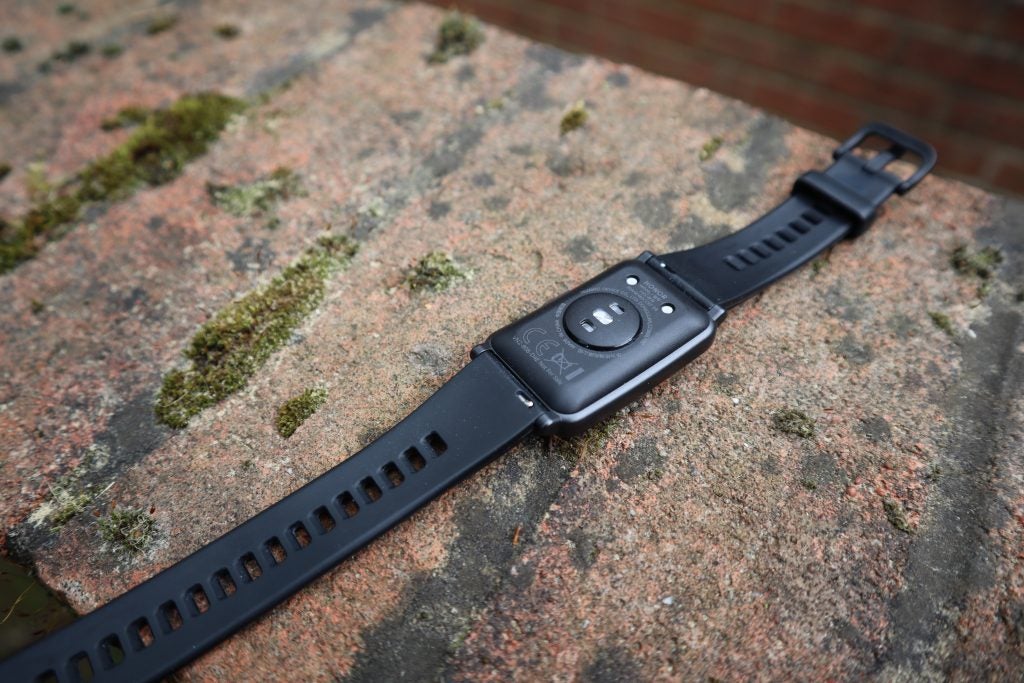 I rarely encountered any issues with the operating system either, although I will say that there is a slight delay when scrolling through menus that constantly served as a reminder that there are more powerful wearables out there. One thing that I simply can’t detract from the Honor Watch ES is its selection of watch faces – there’s a near exhausting amount of styles available at any time via the accompanying Health app, so much so that there’s almost guaranteed to be something to suit everyone’s tastes.

Having spent several weeks wearing the Honor Watch ES, I can now say definitively that it is the wearable’s performance in fitness tracking that has impressed me the most.

I had an inkling that this would be the case as soon I dove into the massive list of workouts that can be tracked – from staples such as running and weightlifting, to more niche activities including laser tag and parachuting, it’s all here.

Even better, if you’re an absolute newcomer to fitness then the Watch ES also includes several workout routines with accompanying animations to get you started with the correct technique. My favourite by far has to be the three-minute ‘re-energise’ workout that’s offered whenever you’re sat down for too long – I’ve found it to be incredibly helpful in loosening the joints and it’s something I now wish every wearable had.

When worn alongside a dedicated heart rate strap, the Watch ES continued to impress with surprisingly accurate results. For instance, during an outdoor run, the chest strap recorded an average of 155BPM and a high of 188BPM. By comparison, the Watch ES was incredibly close with a recorded 153BPM average and a peak of 186BPM. Further testing showed similar results, which is particularly astounding as I’ve seen far worse from much pricier wearables.

Unfortunately, that same level of accuracy doesn’t quite carry over to distance tracking. Leaving my phone at home and using a GPS connected Apple Watch SE for comparison, the Honor Watch ES only logged 4.72km on what was actually a 5.77km run. It’s because of this that I highly recommend bringing your phone with you if you plan on using the Honor Watch ES for outdoor workouts. 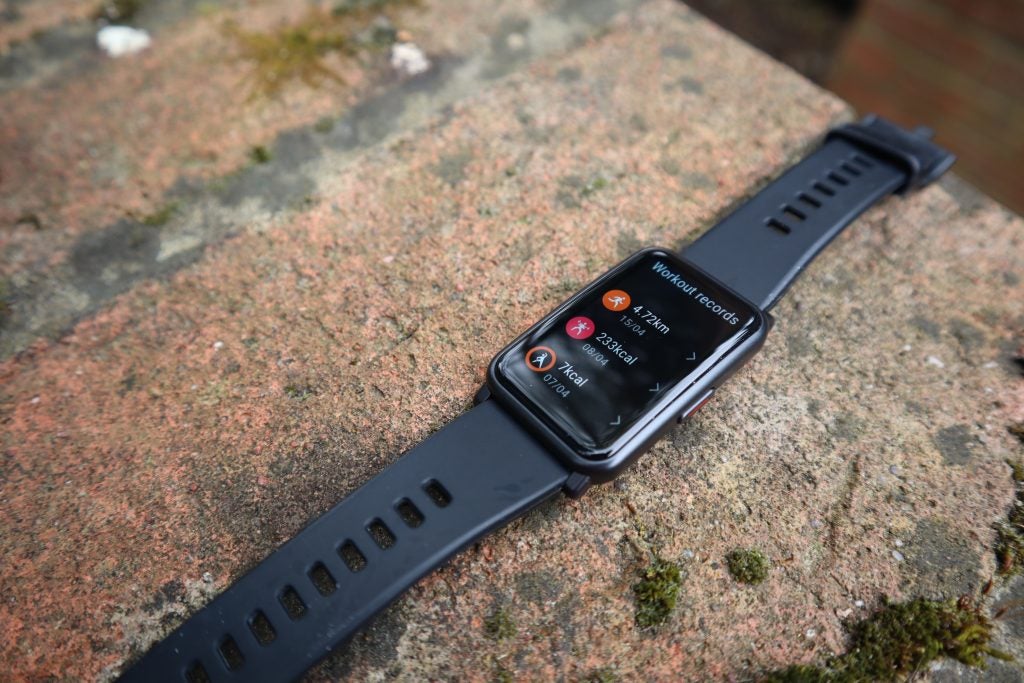 One of the most alluring features touted by the Watch ES’ spec sheet is a 10-day battery life, which is a huge plus if you’ve ever had to deal with the 1-2 day stints of wearables like the Apple Watch 6 and the TicWatch Pro 3. While real-world testing came back just ever-so-slightly short of Honor’s claims, the Watch ES still offers plenty of longevity.

Utilising a selection of features including alarms, sleep tracking, music control and even monitoring several workouts, I was able to reach almost nine days of use before needing to pop the Honor Watch ES back on charge. It’s certainly not the longest battery I’ve ever tested on a wearable (see the Withings ScanWatch), but at 9-days the Honor Watch ES is one of the longest lasting fitness trackers you can buy.

As an extra cherry on top, I was also able to reach a full battery from 7% in roughly an hour. This means that if you need to give the Honor Watch ES a quick top up, you’ll get plenty of use in return.

Without an always-on display, and somewhat lacklustre distance tracking, the Honor Watch ES still has room for improvement, but these issues are hardly worth dwelling on as it’s still one of the best fitness trackers I’ve ever had the pleasure of using.

The substantial battery life, in conjunction with fantastic heart rate tracking and easy to understand workout routines available right there on the device, ensure that the Honor Watch ES is a great shout for any beginners and even some fitness enthusiasts on a budget. Honor scored a homerun with the Band 5, and now it’s done it once more with the Watch ES.

Not only can the Watch ES track a dizzying amount of workouts, but it also offers several routines on the device itself with accompanying animations so you can achieve the correct technique.

With roughly nine days of use from a single charge, the Honor Watch ES can go the distance, which can be pretty handy if you enjoy exercising multiple times per week and don’t want to be constantly pulled in the direction of a charger.

At only £99.99 (and even less when on sale), the Honor Watch ES offers absurd value for money, making it one of the best options to go for if you can’t spend more than £100.

You shouldn’t buy it if you…

The one missing jewel in the Honor Watch ES crown is untethered GPS tracking. You can bring your phone with you and track your route that way, but otherwise you’ll probably have to invest in the Fitbit Charge 4 if this is a must-have feature for you.

It’s not the worst thing in the world but I do know some people who swear by having an always-on display for their wearable of choice, so if you fall into this camp then it might be better to look elsewhere.