The Honor Magic Earbuds have a surprisingly developed feature set considering their low price. They are capable enough to satisfy most casual music and podcast listener’s needs, but their short battery life and middling audio quality mean even moderately serious music fans will be better off paying a little more for a competing set.

The Honor Magic Earbuds are the latest in a long line of Apple Airpods rivals to stem from an Android phone maker.

Like the Galaxy Buds Plus before them, they undercut their fruity competition on price, while offering a near-identical features set.

On paper this makes the Honor Magic Earbuds a great value alternative to the Airpods, offering buyers a similar form factor and ANC (active noise cancellation) for an ultra-low price of £99.99.

If you’re a casual listener they are more than capable, but short battery life and middling audio quality stop them being a good choice for even moderately serious music fans.

Honor Magic Earbuds design – Eye-catching and functional, but with a few key omissions

The Honor Magic Earbuds have a similar design to the Apple Airpods Pro. They feature in-ear tips, connected to a long stem main body which houses touch controls and twin mics.

Outside of the aquamarine colouring, if you took the Honor branding off, you’d struggle to tell the Magic Earbuds apart from the Airpods from a distance when out of their pebble-shaped case.

The buds tick most of the right boxes for functionality, though there are a few odd omissions. The case’s 81 x 35 x 29 mm dimensions are suitably pocket-sized, and the addition of ANC on a sub-£100 pair of wireless earbuds is a rare bonus. 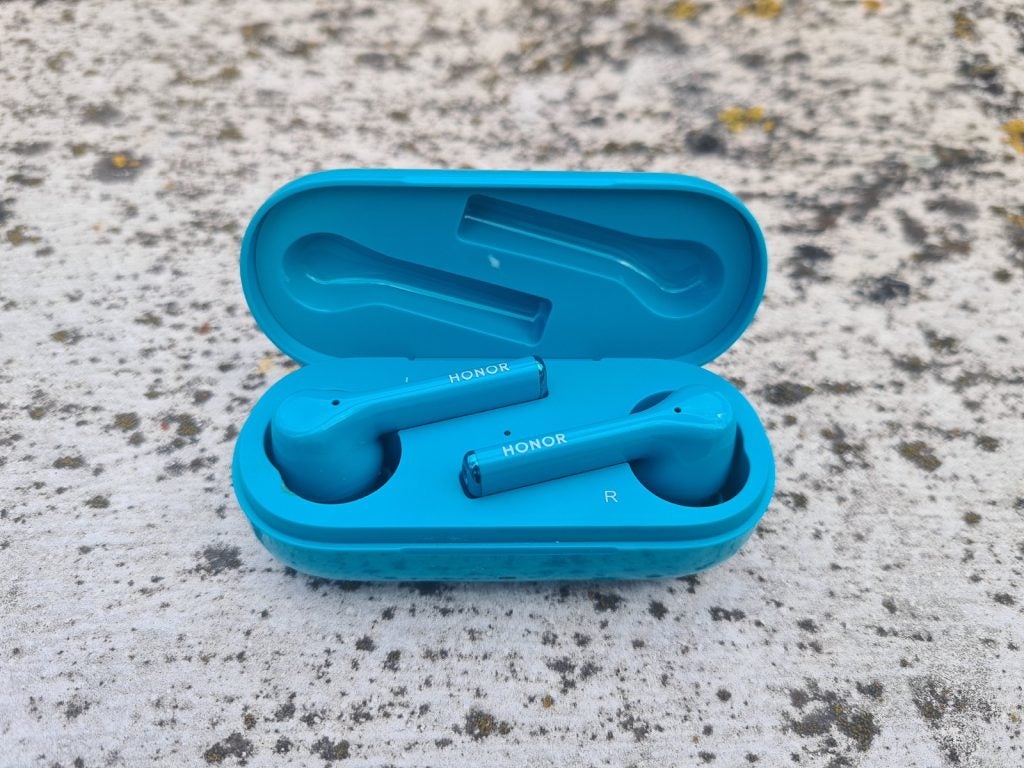 The silicon tips included in the box make it quick and easy to get a solid, comfortable fit and seal, though the lack of wingtips will be an issue if you’re a runner. The earbuds’ superlight 5.4g weight makes them far more comfortable to wear than certain competing sets, like the Amps Air Plus.

The touch controls and onboard mics work fairly well, especially compared to a number of the competing sub-£100 true wireless sets I’ve tested. You can skip songs and play/pause audio by double-tapping the buds. A long press turns on the ANC on and off, so you can wear them out and about on the street and still be aware of your surroundings.

With everyday use the controls are accurate and I had no issue using them. The only time they went a little haywire was when I tried to use them while running with sweaty hands, or in the rain. This is an issue with nearly all the buds I test with capacitive controls, however. 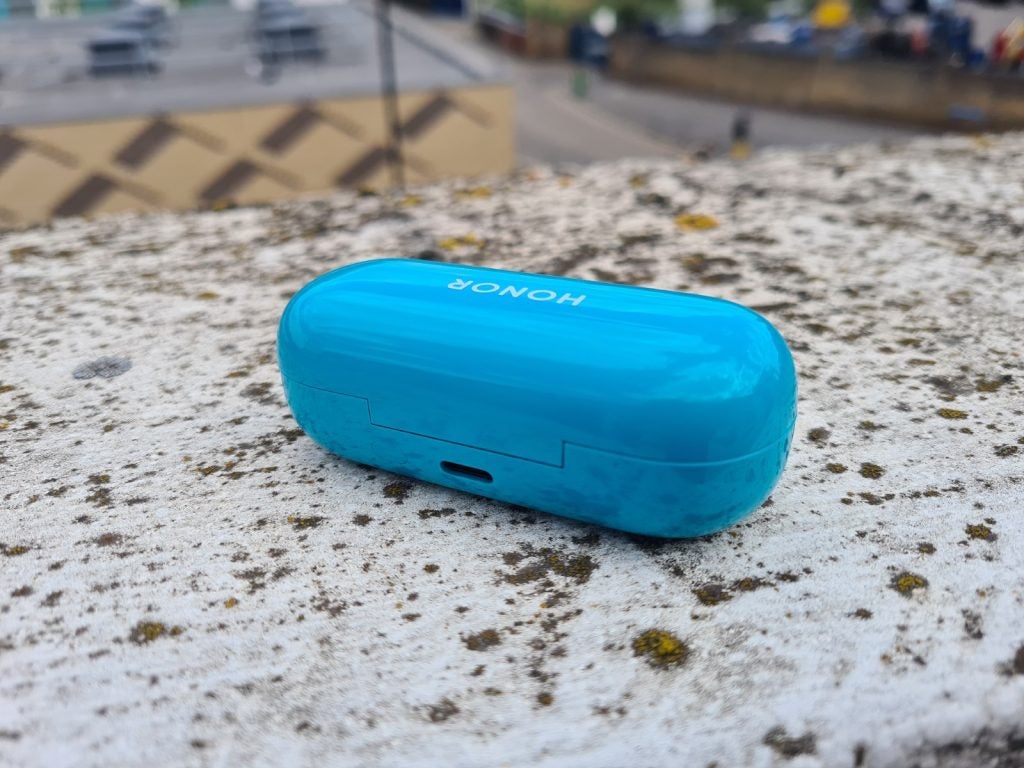 The buds’ dual-mic setup also ensured incoming call quality was great. Using them to take and make calls while working from home with a tumble dryer in the midst of a full spin cycle, the person on the other end of the line could still hear what I was saying with minimal fuss.

The only downsides are that the Magic Earbuds don’t carry any formal IP certification for water and sweat-proofing. This is likely a cost-saving measure as you have to pay for certification, but it does hamper the buds’ appeal to the fitness market. I’d recommend regular runners or gym-goers pay a little extra and get a set with a decent IP rating with clip or wingtips, like the Jaybird Vista, as a result.

Battery life will also be an issue for people that use their earphones a lot. Honor quotes the buds as offering around three hours listening off a single charge with ANC on and 3.5 hours with it off. A few years ago this would have been fine, but the quoted life is a little low by today’s standards. Draining the battery completely I found the charge case can fully top the buds up between four-to-five times before dying.

This again means they offer slightly less listening time than more expensive sets, such as the stellar Clear Ally Plus. Given the disparity in price this is somewhat forgivable, though. 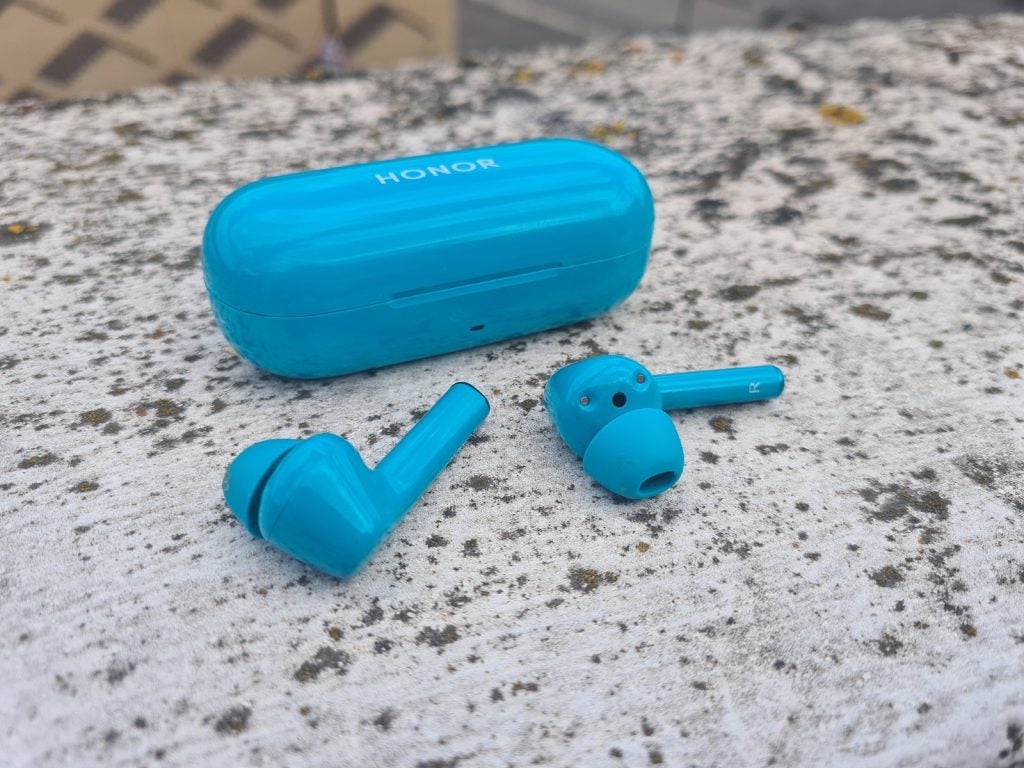 The bigger issue is sound quality. Being blunt, you’re never going to get industry-leading audio from a £100 pair of wireless earbuds, and the Honor Magic Earbuds aren’t the worst I’ve tested but they are distinctly average.

Easy genres like rock and pop sound ok. Mid-heavy vocals sound suitably distinct and having enough power to get your foot tapping. Max volumes are also reasonably good and the buds offer enough dynamism for post-rock crescendos and punk breakdowns to have some impact.

But, as is the case on nearly all the sub-£100 sets I test, the low end is uniformly underpowered. Blues tracks’ walking bass lines don’t rumble quite right and growling industrial music lacks menace thanks to poor bass extension. 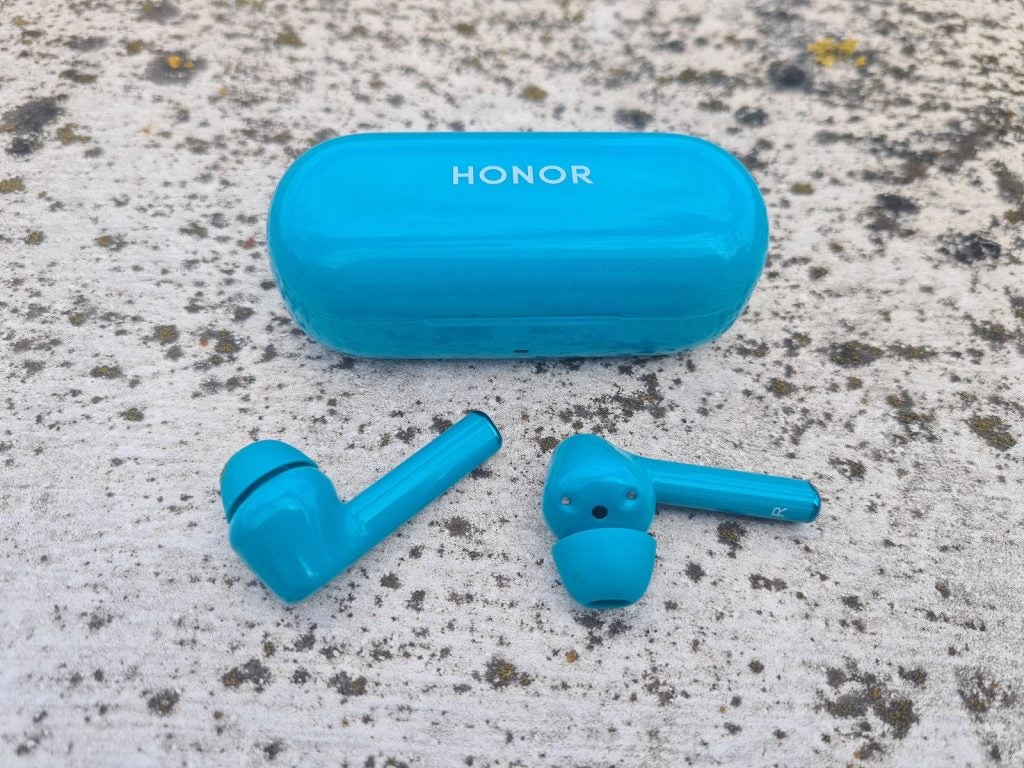 At high volumes sibilance can also creep in giving attacking guitars an unpleasant acidic quality – though this issue is easily fixed by turning the volumes down.

The included ANC is just about powerful enough to handle background office noise, though I didn’t get a chance to test it in more intense situations, like the morning commute due to the ongoing lockdown.

I didn’t get a chance to test wireless connection stability in busy signal areas, like King’s Cross and Waterloo station for the same reason, but I’m yet to suffer any serious dropouts using them while running around London, which is a positive sign.

Should you buy the Honor Magic Earbuds?

The Honor Magic Earbuds don’t do much to differentiate themselves from the sea of similar sets on the market. But, their comfortable fit, pocket friendly design and solid mic quality make them a perfectly acceptable wireless earbuds for casual listeners on a strict budget.

The lack of IP rating and wingtips mean gym-goers will be better off looking elsewhere. Distinctly average audio quality also makes them a poor option for even moderately serious music fans, who will be better off spending a little more and picking up a more accomplished set, like the Clear Audio Ally Plus.