What is the Honor 3C?

It may be arriving right at the tail end of 2014, despite launching elsewhere a year ago, but we have a lot of time for the Honor 3C and its aims. This phone is one of the few mobiles to offer a convincing alternative to the budget champion, the Motorola Moto G.

It’s even cheaper, in fact. At £109, the Honor 3C offers frankly amazing value. And while it may at first appear to be from a totally unknown brand, Huawei is the force behind the Honor name.

Typical of Huawei, there are a few little design blunders and the £109 version doesn’t have 4G, but the Honor 3C is still one of the best budget phones of the year. It puts the Samsung and Sony budget mobiles to shame in some core respects. 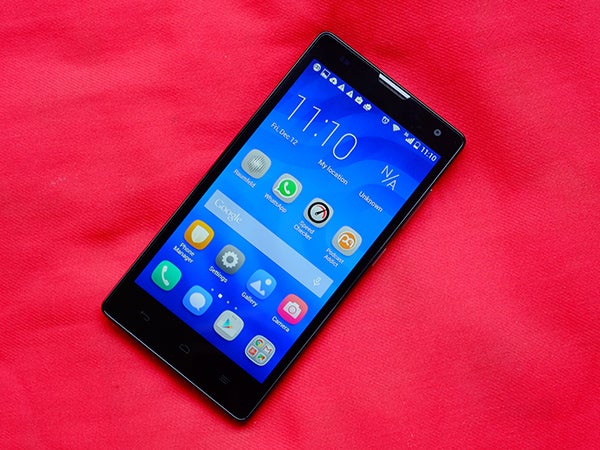 After all that praise, we’re going to get back down to earth with one of the Honor 3C’s weaker areas: design.

Like the Honor 6 it has a supremely glossy back, but this time it’s not pretending to be glass. It’s just plastic that’s so shiny it looks as though it’s been laminated.

It’s a completely unforgiving surface that’s going to do the Honor 3C no favours in the long run. Yes, it may look flashier than matte plastic to some eyes, but it’ll show up scratches, scrapes and marks like badges of honour (no pun intended). 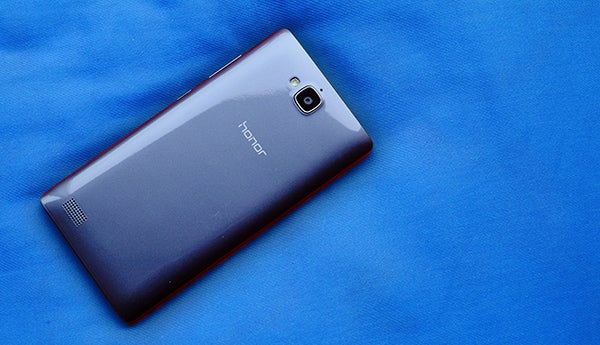 The feel is more contentious than soft-touch or plain plastic, too, with a slightly tackier vibe. If Honor toned down the finish by about 50 per cent, we’d be a lot happier. There’s still a chance for that, though — the Honor 3C uses a removable cover, and already you can import replacement covers should yours get too tatty. If the 3C proves popular, and by all rights it should, these may make their way to some UK retailers.

So, we don’t love the rear finish, but the design isn’t too bad compared with what’s on offer from some other phones at the price. The Sony Xperia E3 and Samsung Galaxy S3 Mini, which is still widely on sale, look cheaper thanks to their smaller screens and chunkier bodies. While the Motorola Moto G arguably looks a bit better, we found the Honor 3C’s handling to be superior.

At 9.2mm thick it’s significantly slimmer than the Motorola, and feels
less awkward to use as a result. We’re pretty happy with how the Honor
3C feels in the hand, after getting over the tacky finish. 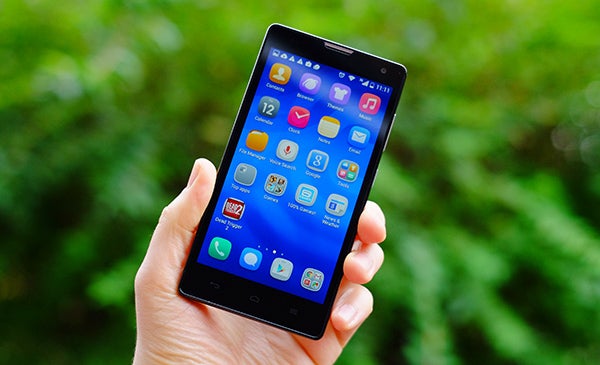 Unlike many budget phones it doesn’t use software soft keys, though. It has a trio of touch buttons below the screen — the usual Android fodder of ‘back’, ‘home’ and ‘menu’. These don’t light up, though, and are only signposted with very feint icons. 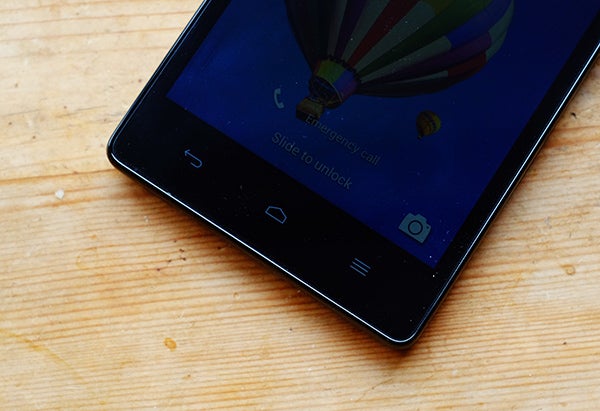 We can’t complain about this too much, though, as in the past we’ve said that Huawei makes its phones look worse with great big, bright softkey icons. This subtler style is much better.

In normal use the Honor 3C looks like a bold rectangle of black from the front, and that’s a good look, one that’s much slicker than we expect from a £100-odd phone. 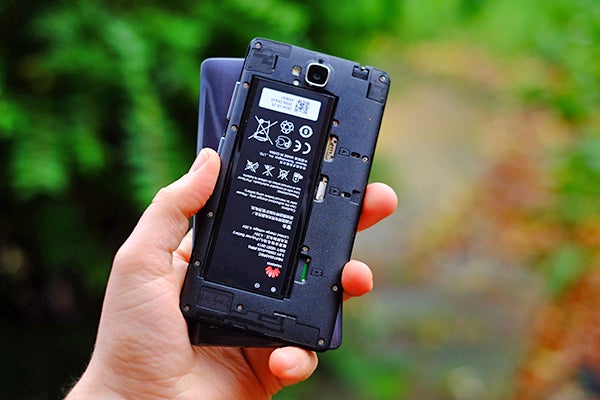 As a phone made originally for the Chinese market, it’s no great surprise that the Honor 3C has two SIM slots. While we imagine few UK/US Honor 3C buyers will actually use this feature, it’s handy and is useful if you might want to use the phone abroad or as a work device.

One SIM slot supports WCDMA and GSM SIMs while the other supports just GSM ones. In the UK this is no issue, but be sure to check what connection type a foreign network uses before plugging a SIM in. It won’t fry the phone, it just won’t work.

You’ll also find a microSD card slot under the back cover. The Honor 3C has 8GB of storage, which is fairly generous for a phone around the £100 mark, but you’ll obviously need to invest in a memory card to store more than a few videos or music tracks. 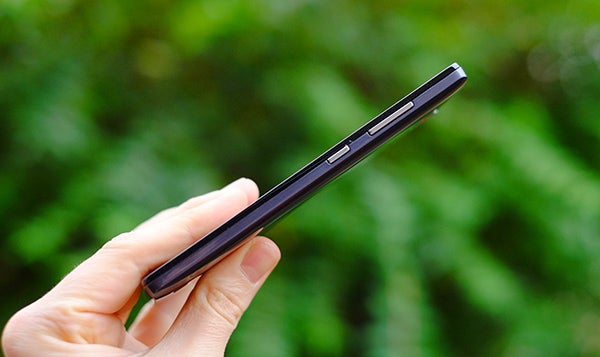 The screen is the most remarkable element of the Honor 3C. Its specs are similar to those of the 2014 Moto G, which cost around £30 more – a not-insignificant amount at this level.

It has a 5-inch 1,280 x 720 pixel IPS screen, and for the price it is superb. It’s sharp, bright and fairly colour-accurate. To our eyes it appears perhaps even superior to the Moto G’s display, with even less evidence of the pixel structure until you get your eye dangerously close to the screen. The resolution earns the phone 294ppi, a bit lower than the iPhone 6’s ‘Retina’ standard, but fairly close given how cheap this phone is.

Set it next to any £100-150 phone from Sony, Samsung or LG and the Honor 3C will make them look pretty poor. None of the big names have managed to offer a budget phone with anything approaching the screen quality on offer here, which has proved to be one of 2014’s big disappointments. 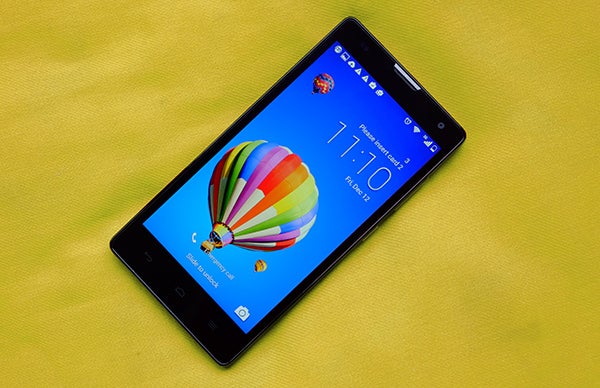 There’s also no major backlight bleed or leakage in our Honor 3C, something we see quite commonly in phones 2-3 times the price. In short, Honor has aced it.

We find virtually nothing to dislike about the display. Even the colour reproduction is very pleasant, with plenty of pop while keeping the tone balanced, and saturation levels in check. You have control over the colour temperature too, with a warm-cool slider sat in the Settings menu.

Viewing angles are strong thanks to the IPS-type display, and we’re very happy with the top brightness level on offer – we found it sufficient for use in outdoors daylight. Unlike some entry-level phones, the Honor 3C has an auto brightness setting, and it’s a pretty good one too.

Rather than just being able to turn Auto on or off, you can also set a relative level, letting you pick between having a slightly brighter screen or better battery life without having to tweak the backlight level throughout the day.

The depth of blacks in the Honor 3C is naturally not close to that of an OLED display, but that comes with the territory when using an LCD screen.

In short: this is perhaps the best 5-inch screen you’ll find at £109, coming in slightly under the Moto G, which offers similar display quality.