The Honestech nScreen Deluxe is a small box that you connect to your TV via a HDMI cable which then allows you to stream digital media from your PC, smartphone or tablet directly to your telly. If you’re using the device with a PC you can also have it wirelessly mirror your PC screen to your TV.

The nScreen is physically pretty small. Measuring 135x82x26mm, it’s a little bit smaller than your average router, but looks very similar due to the glossy white plastic used on the top of the unit and the matt black used on the front and side edges. There’s no control panel on the front and it doesn’t come with any remote control. In fact, apart from the power button on the rear, everything else is controlled by software on either your PC or mobile device. 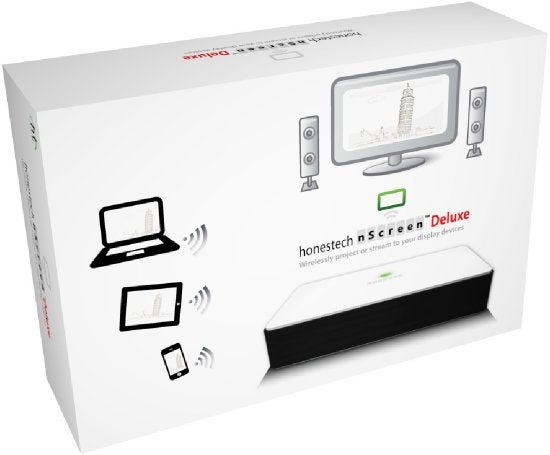 Peak around the rear and you’ll find a HDMI port along with a mini-jack AV output that can be used for outputting composite video to set’s that don’t have HDMI. There’s also a USB port, which seems to be only used for firmware updates, and an Ethernet port. The nScreen also has Wi-Fi built-in. Power comes via a pretty standard external wall adaptor.

Hit the power button on the back of the unit and an LED on the top lights up in green to show you it’s on. It also displays a basic homescreen on your TV that shows the nScreen logo along with the box’s Wi-Fi Access Point name and current IP address.

However, before you can make any use of it you first need to install some software on your computer, phone or tablet. The PC software is included in the box on CD-Rom, or alternatively you can download it from the company’s website. Annoyingly this is protected via a serial number printed on the CD-Rom’s paper cover, so you’ll need to be careful not to lose it.

Alternatively you can download a free app for iOS devices from Apple App Store for from Google Play for Android phones and tablets.

When the nScreen first starts up it creates its own Wi-Fi Access Point. To connect to this you need to log off your own router and connect to the nScreen’s network using the password provided in the manual. Of course, this means that you lose internet access. To get around this problem Honestech has added an Ethernet port on the rear of the nScreen so you can connect it into your home network and have it share the internet connection back to your laptop via Wi-Fi.

It’s not very well explained in the manual, but there is also an alternative way to configure the nScreen’s network feature so that instead of setting up its own network it joins your existing one. To do this you need to start up your browser, log into the nScreen’s web console and change the network option from Access Point to either the Ethernet or Wi-Fi Client options. Setting up the networking in this way is probably a lot more convenient for those who are likely to use the nScreen in a home setting.

Anyway, back to the PC software for the Honestech nScreen Deluxe. It works in two ways. You can either have it simply mirror your desktop to your TV or alternatively you can choose music, picture or video files from within the nScreen software and have them streamed to the device.

The mirroring function isn’t quite as good as we’d hoped. The marketing blurb on the box says that the nScreen works at resolutions of up to 1080p. Unfortunately, it turns out that when it comes to mirroring the maximum it can handle is 1280×720, which is quite low. Also, the supported data rate doesn’t seem to be that high, so although it works fine for desktop apps like PowerPoint and web browsing, if you try to play video in this mode there’s noticeable tearing and jerkiness due to the compression used. 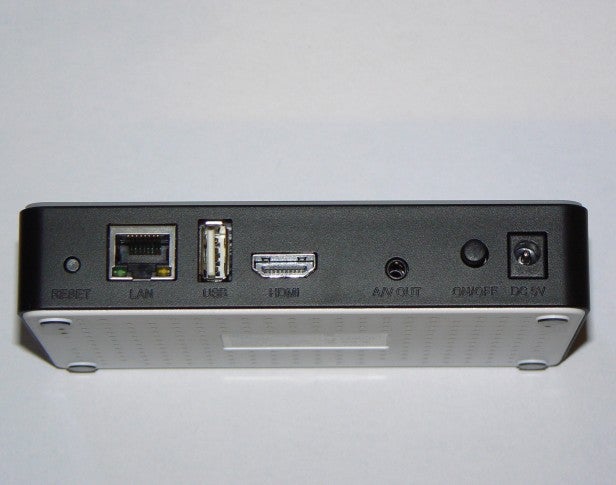 In the second mode, the nScreen doesn’t do mirroring at all. Instead you simply use a file browser to load in a media file, such as a video, and then hit the play button to start streaming the clip directly to the device. In this mode you can play videos of up to 1080p in a number of formats including MKV, DivX and Xvid.

However, audio support is quite limited, as the nScreen doesn’t seem to be able to handle surround sound soundtracks. If you load a video file with an AC3 or DTS soundtrack, the video will play but you’ll hear no audio, which rather limits its potential as a streamer. Also, the PC software seems quite buggy. We found we sometimes had to select our video file multiple times before it would actually load into the streaming interface and allow us to play it. 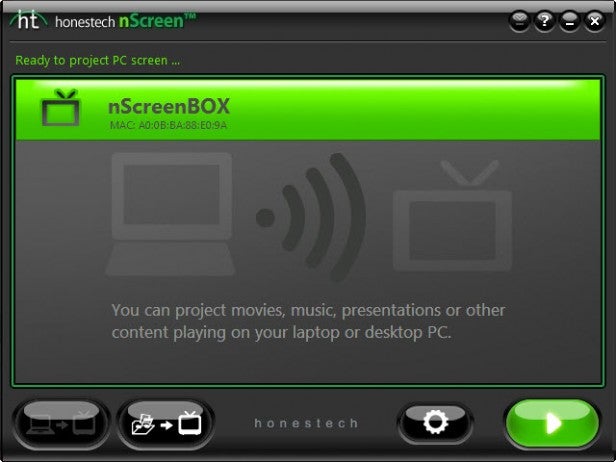 We also tried the Android software on a Sony Tablet S. The interface for this is incredibly basic. When you open up the app it just presents you with a file browser that you use to locate the media you want to play. Once you’ve selected the file you hit the play button and its streamed form your Android device to your TV. However, the software is even more buggy than the PC version, causing a number of “force closes” on our tablet. We could also only get it to play video at a maximum resolution of 720p, as all the 1080p videos we tried caused the software to through up a media renderer time out error.

On paper the nScreen Deluxe looks like quite an exciting product thanks to its ability to work with not just PCs and laptops, but also iOS and Android mobile devices. However, a number of weaknesses, including the low resolution of its desktop mirroring, buggy software and its inability to handle surround sound audio means it’s difficult to recommend.