What is the Homido?

When we refer to virtual reality, it’s likely that Oculus Rift, HTC Vive and Project Morpheus are first to spring to mind. At a push the Samsung Gear VR might even enter your thoughts. One device we’re pretty sure that you won’t recall is the Homido.

It’s
basically a superior version of Google Cardboard, the search giant’s
low-cost VR platform designed to work with a fold-out cardboard mount.
The Homido is made of plastic, and as a result is far more studier – and
more comfortable to use.

The premise is exactly the same,
however. You slot your smartphone into a dedicated space at the front
and place the Homido on your head. This allows you to view VR content on
your phone through the device’s lenses.

Aside from the material
from which it is made, the other notable difference between the Homido
and Google Cardboard is the price. The Homido costs £59.99, whereas you
can pick up the Cardboard for as little as £10.

So is it worth spending the extra dosh for what is, essentially, a premium version of the Google Cardboard? 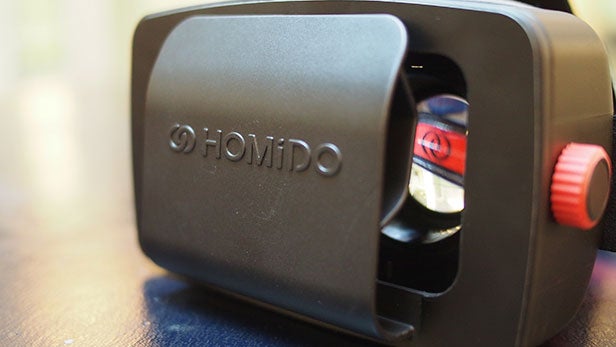 The
Homido’s design is it’s defining quality. It’s made from a sturdy
plastic that has a matte finish, which gives it a premium feel. Around
the rear of the headset you’ll find a soft foam cushion that sits
between your eyes and the headset, which makes it comfortable to wear
for longer periods of time. This cushion can be removed and replaced if
it becomes worn over time – although you get only the one in the box.

Out
of the box, the Homido has a single strap attached that holds the
headset onto your head. However, a second strap is included too, which
runs from the top of the headset to the back of the headband. We advise
that you use this; the Homido is far more comfortable with the second
band in place, which stops the unit slipping down your nose when you
begin to move around. 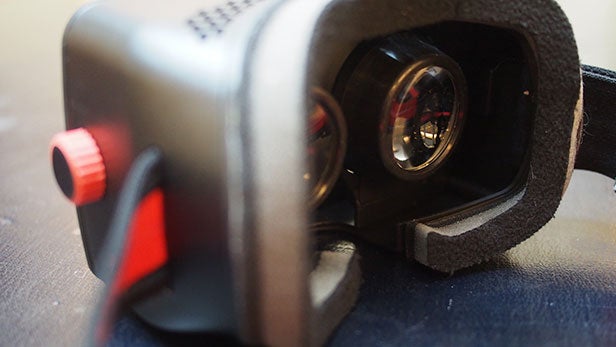 The
issue with the Homido’s design is that. like Google Cardboard, it’s
impossible to use if you require glasses – unless they’re particularly
slim and narrow. I tried it with some heavy-rimmed, “nerd-esque” specs
and found the headset couldn’t accommodate the rims within the trim.

However,
the Homido does have interchangeable lenses that should compensate for
your specs. They’re available in three variations: near-sighted,
far-sighted and normal vision. Just switch out the lenses for the ones
that feel most comfortable for you.

This is easily done too:
simply hook a finger under the rubber rims of the lenses and they’ll
easily pop off in order for you to swap them over. 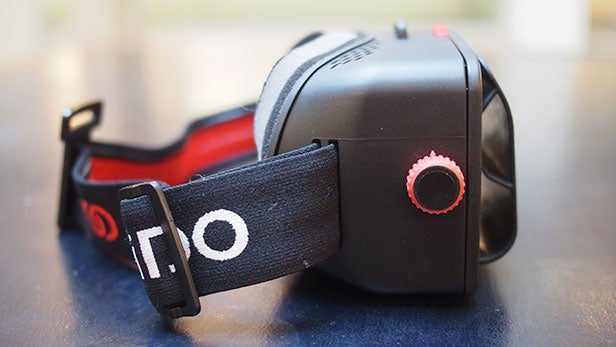 One
of the most important design elements of the Homido is the large
plastic smartphone clip on the front of the unit. Unlike devices such as
the Samsung Gear VR, this feature allows the Homido to be compatible
with a range of devices, both Android and iOS.

The unit can
comfortably accommodate smartphones with screen sizes between 4 and
5.7in, but the company recommends you use a 5in display for the optimum
experience. However, whatever size you opt for – we tried it with an
iPhone 6, Google Nexus 5 and iPhone 6 Plus – the sturdy clip holds the
handset securely in place. 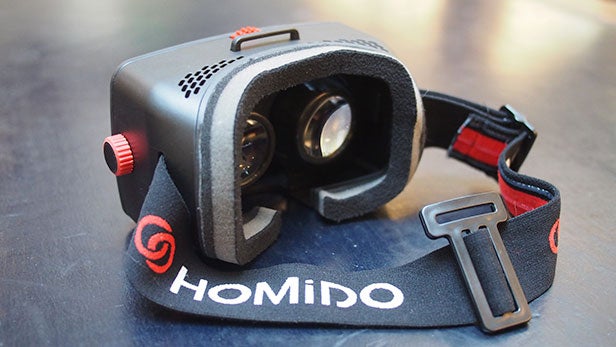 A
search around the App Store and Google Play reveals a good selection of
VR apps available. However, Homido attempts to make things easier for
you.

You can download two apps called Homido Center and Homido Player to kickstart your virtual-reality experience.

The
Homido Player allows you to watch 360-degree videos from YouTube,
iTunes and elsewhere. Of course, it doesn’t come with any videos itself,
so you’ll have to search them out online or buy some. Thankfully, the
internet browser within the Player app provides direct links to
360-degree video content on YouTube. However, it doesn’t yet feature
many interesting ones. 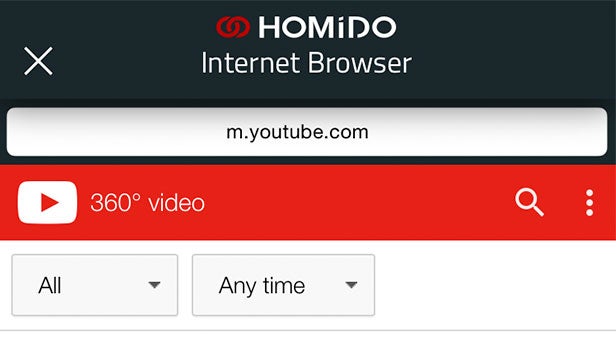 Within
the Homido Center is a selection of games and experiences – such as
virtual-reality movie trailers – that you can download and install
directly to your phone.

Sadly, we can recommend only a few – head over to our pick of the best Google Cardboard games to find out which they are – and you’ll probably only ever play them once or twice due to their nature.

Hopefully
this will improve with time, as developers realise the potential for
products such as the Homido. There are certainly a greater number
available on Android than iOS, thanks to the interest in Google
Cardboard when it was first released. Nevertheless, the number of VR
games still make up a tiny percentage of the total games on either app
store. 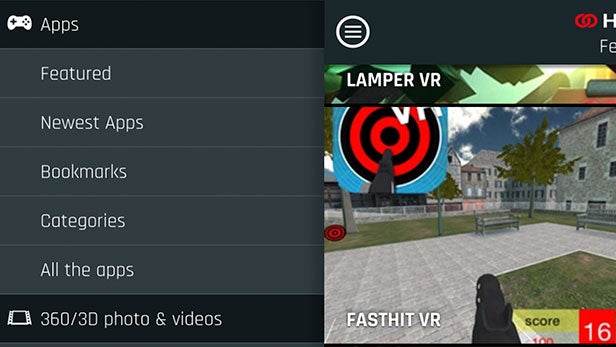 There’s
also another issue with the Homido. Headsets such as Google Cardboard
and the Samsung Gear VR feature a touch-sensitive button on the side
that enables you to interact with the games – connecting to your
smartphone via NFC or Bluetooth.

The Homido has no such input,
however, so you might find that some of the VR games on Android and iOS
are unplayable. To get around this, you’ll need to purchase a Bluetooth
controller such as the Mad Catz C.T.R.L R to interact with your
smartphone without touching the screen. Homido has its own Bluetooth
gamepad, which retails for a fairly inexpensive €19.99 (around £15), but
it’s compatible with only Android.

This isn’t an ideal solution
either way, and it’s quite a stumbling block for those who have forked
out £60 for the headset only to find that half the available games
aren’t compatible with it. 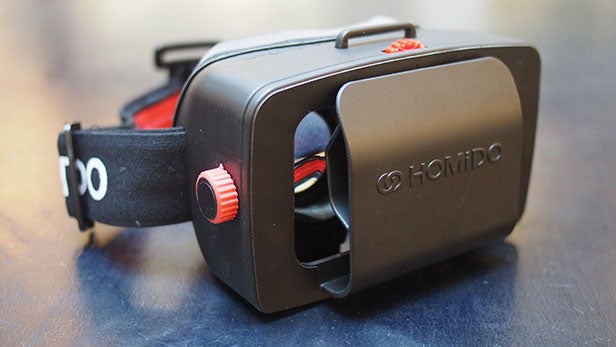 Devices
such as the Homido are a little like remote control helicopters. You
buy them on a whim, expecting to get weeks of fun out of them – but the
reality is that you’ll use them once and then they’ll sit in a cupboard
gathering dust, occasionally re-emerging as a party piece.

If you want your first taste of VR with a dedicated headset that doesn’t cost the earth then you could do worse than the Homido.

For
£10, however, you can pick up Google Cardboard, which may lack the
Homido’s premium design but you get a better device for a lot less
money.

It’s a good VR effort, but the inflated price
and lack of input button make the Homido a one trick pony.
You can only be a bystander in VR for so long.