There's plenty to like about Hive's HomeShield, including the way it can mix home automation with security, its ability to reuse existing sensors, and the clever Multi-trigger option to prevent false alarms. It's the monthly price that's somewhat off-putting, especially since £9.99 only gets you cloud storage for one camera and it doesn't include either police dispatch or cellular backup. If you have Hive sensors already, this alarm could be a good upgrade; for everyone else, you're likely to find a better deal elsewhere.

Although starting out in the area of heating, Hive has expanded its offering to include a range of devices from security cameras to smart lighting. With Hive HomeShield, the company adds home security into the mix.

A subscription service, HomeShield only provides the full range of features if you pay monthly, and there’s no free security option. Still, since this fee includes cloud storage for cameras, HomeShield can be a smart upgrade for anyone with existing Hive products.

As is the case with other Hive products, HomeShield requires a Hub, which uses the Zigbee smart home protocol to connect and control your devices. What’s clever about HomeShield is that it can use your existing sensors.

Prior to adding security to its lineup, Hive already had window/door and motion sensors, although these were used to automate your home, controlling lights or heating. Now, when you sign up for a HomeShield account, you can choose to use your existing sensors as part of your alarm system.

Likewise, you can integrate your cameras (the Hive View or Hive Outdoor) into the mix, using them to record what’s going on and to trigger the alarm, too.

However, if you have some sensors that aren’t particularly well placed for security, such as a door sensor on a cupboard, you can leave them out of HomeShield. You can purchase additional motion sensors or window/door sensors, both available for £29 each, in packs of three for £79 or packs of five for £119. 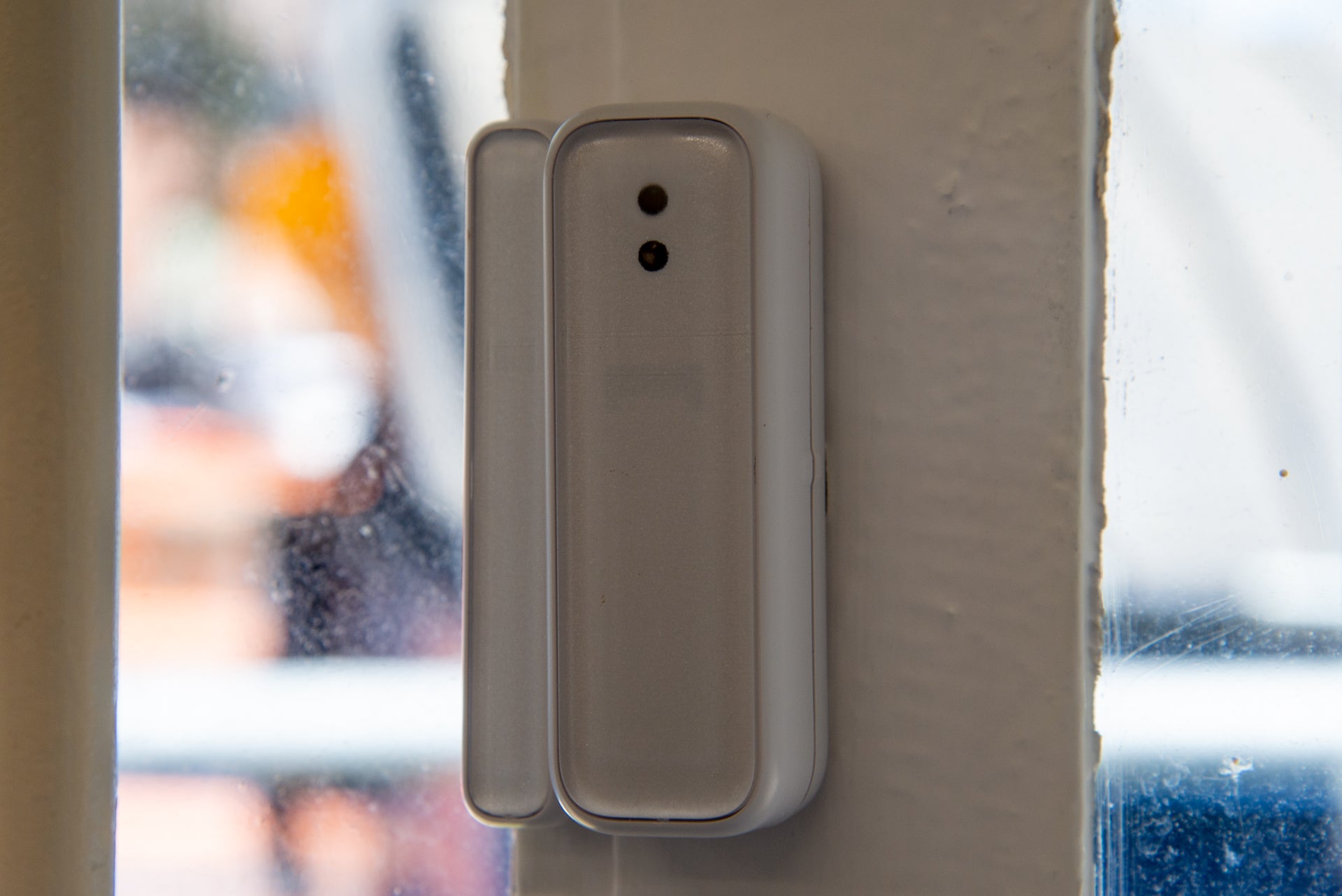 Both are easy enough to place, with sticky pads making them easy to position where you want them. Just be aware that the motion sensors aren’t pet-friendly, so will be triggered if you place them in a room a pet will occupy. 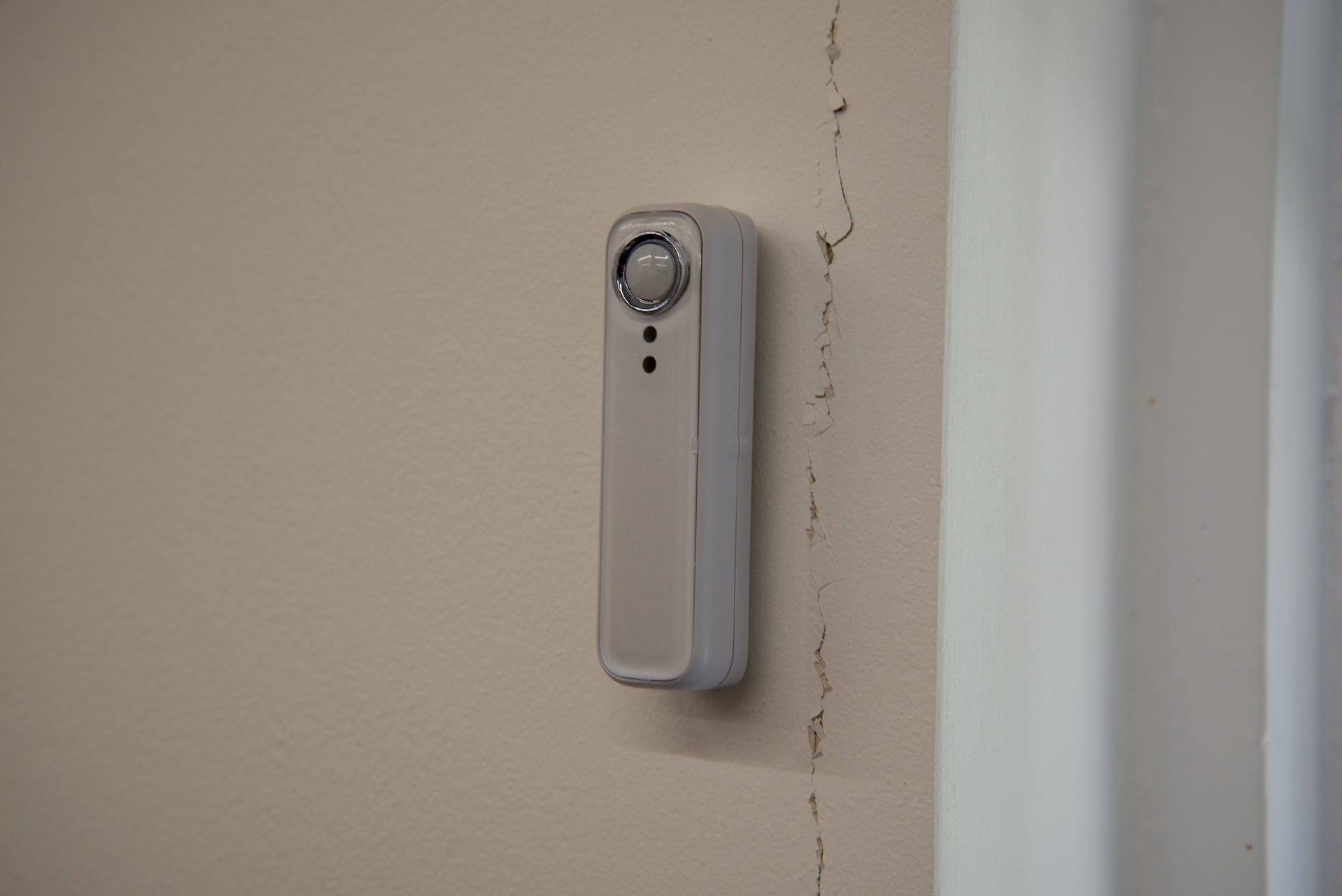 As well as the sensors, you may well want to buy the siren (£62). This is a mains-powered device with battery backup, which can be fitted to the outside of your house. There’s a 7m cable in the box, but you’ll need to plan your cable run and drill holes in the right places in order to reach a power socket. 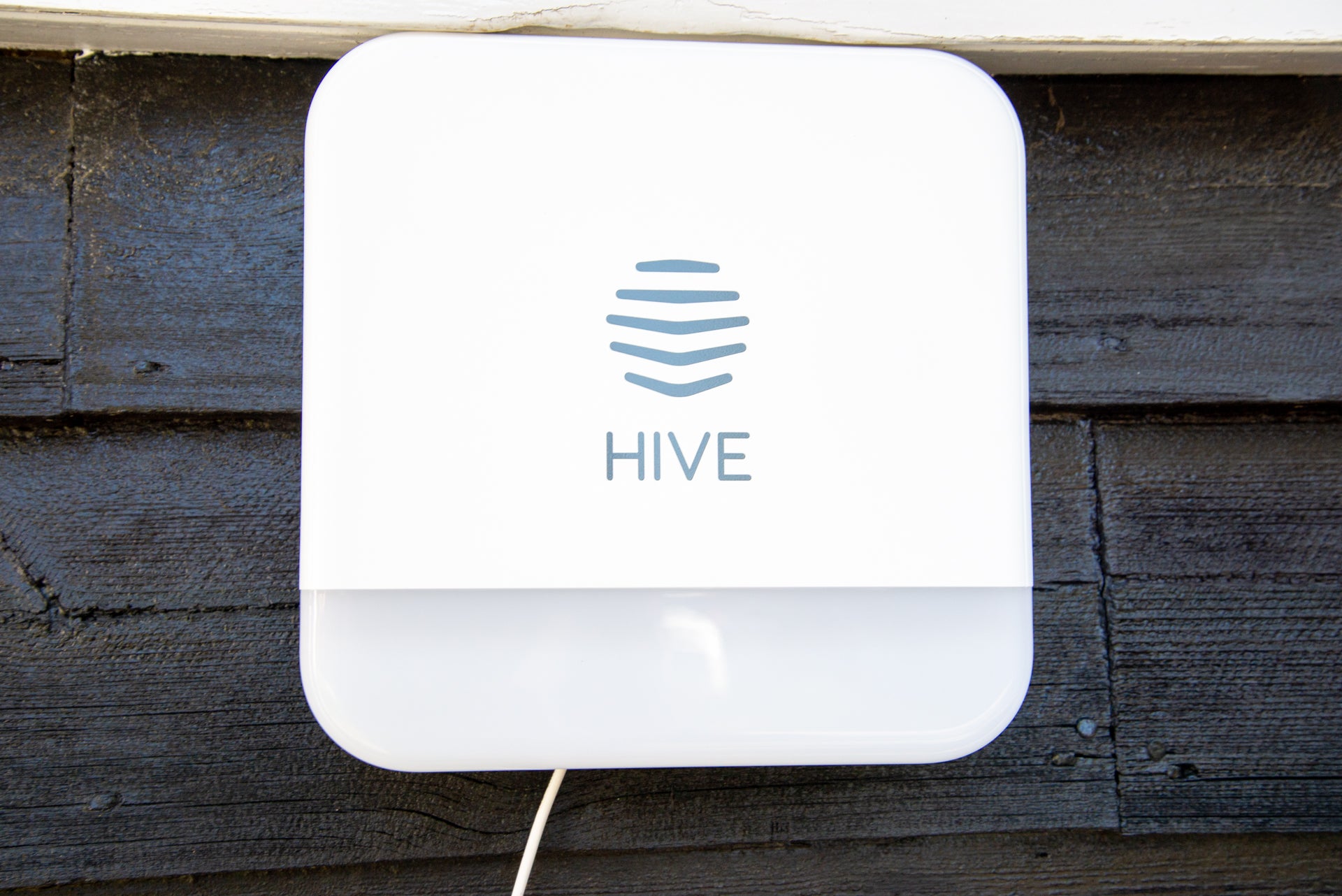 As well as a siren, this bit of kit is also an outside light that you can operate manually, set to a schedule, or have turned on automatically when a sensor is activated – say, using your outdoor camera to trigger it automatically.

Finally, there’s the keypad (£39), which is a battery-powered unit that lets you arm and disarm your system with a PIN. It’s a useful tool and is often quicker to use than the app. A keyfob option, of the type you get with Abode would have been welcome. 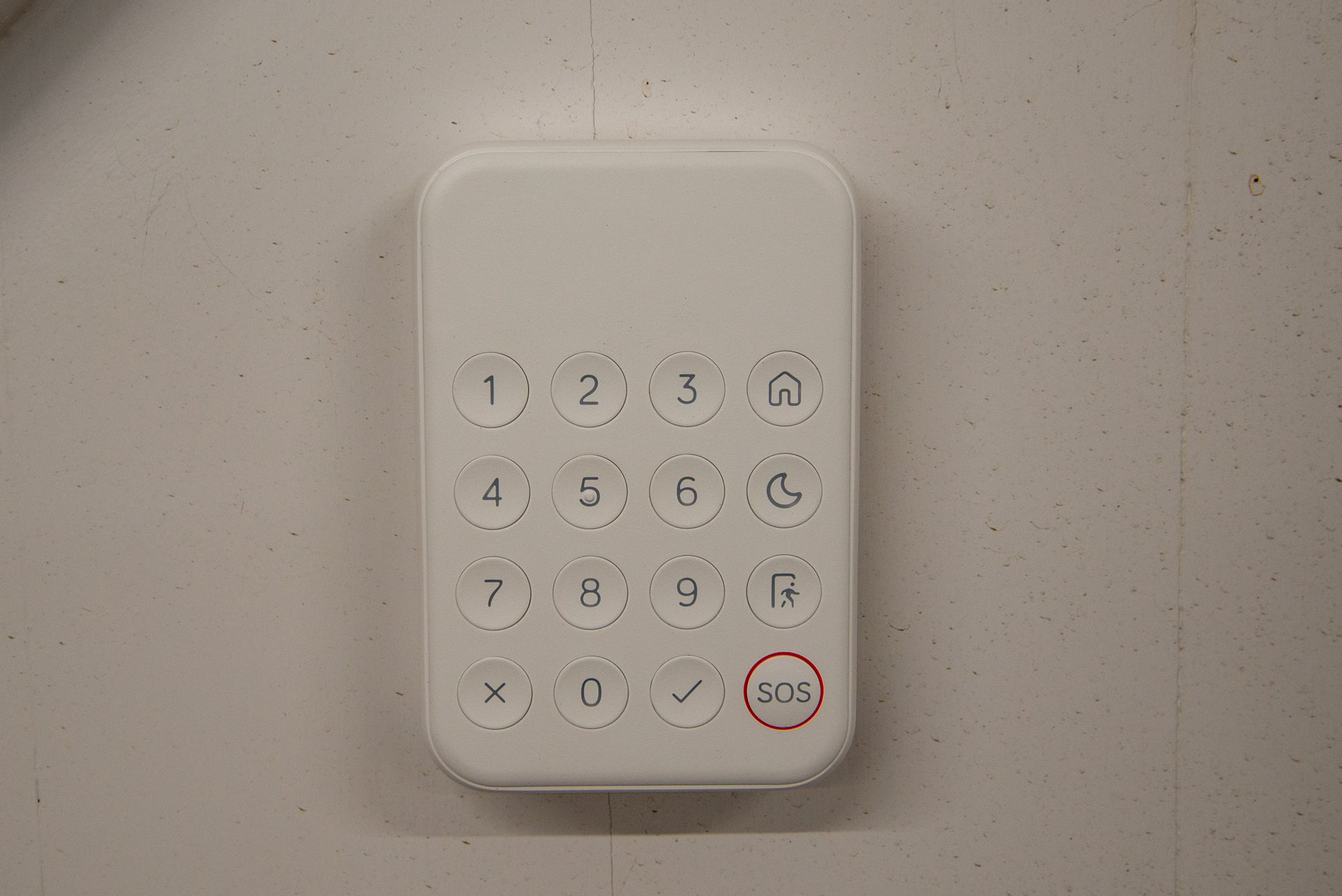 If you don’t have any Hive kit already, you can buy the Security Pack (£226), which includes one motion sensor, two window/door sensors, the bridge, keypad and siren.

First, I have to talk about money: HomeShield requires a subscription to work, which currently costs £9.99 a month. For this fee, the main benefits are that you get to set the alarm remotely, you get an additional mode (more on this later), voice control and 30 days of free cloud storage for one camera.

If you cancel the monthly subscription, you lose app control of the security features and are limited to using the arm and disarm modes via the keypad only.

This is a little expensive. The Ring Alarm, in comparison, is completely free to use and provides remote app control out of the box. Upgrade to Ring Protect Plus (£8 a month) and you get 30-day cloud storage for any number of cameras and assisted monitoring, where your phone is called by a robot in the event of an intrusion. And, for this tier, Ring also offers cellular backup, so you’ll receive notifications even if your broadband is down. With Hive, your system will sound the siren if your broadband is down, but you won’t get a ping on your phone.

At its most basic, HomeShield works much like any smart alarm system, with a choice of three modes: Home, Sleep and Away. For Sleep and Away modes, you can choose which sensors are active – say, disabling motion sensors and upstairs door/window sensors in Sleep mode. 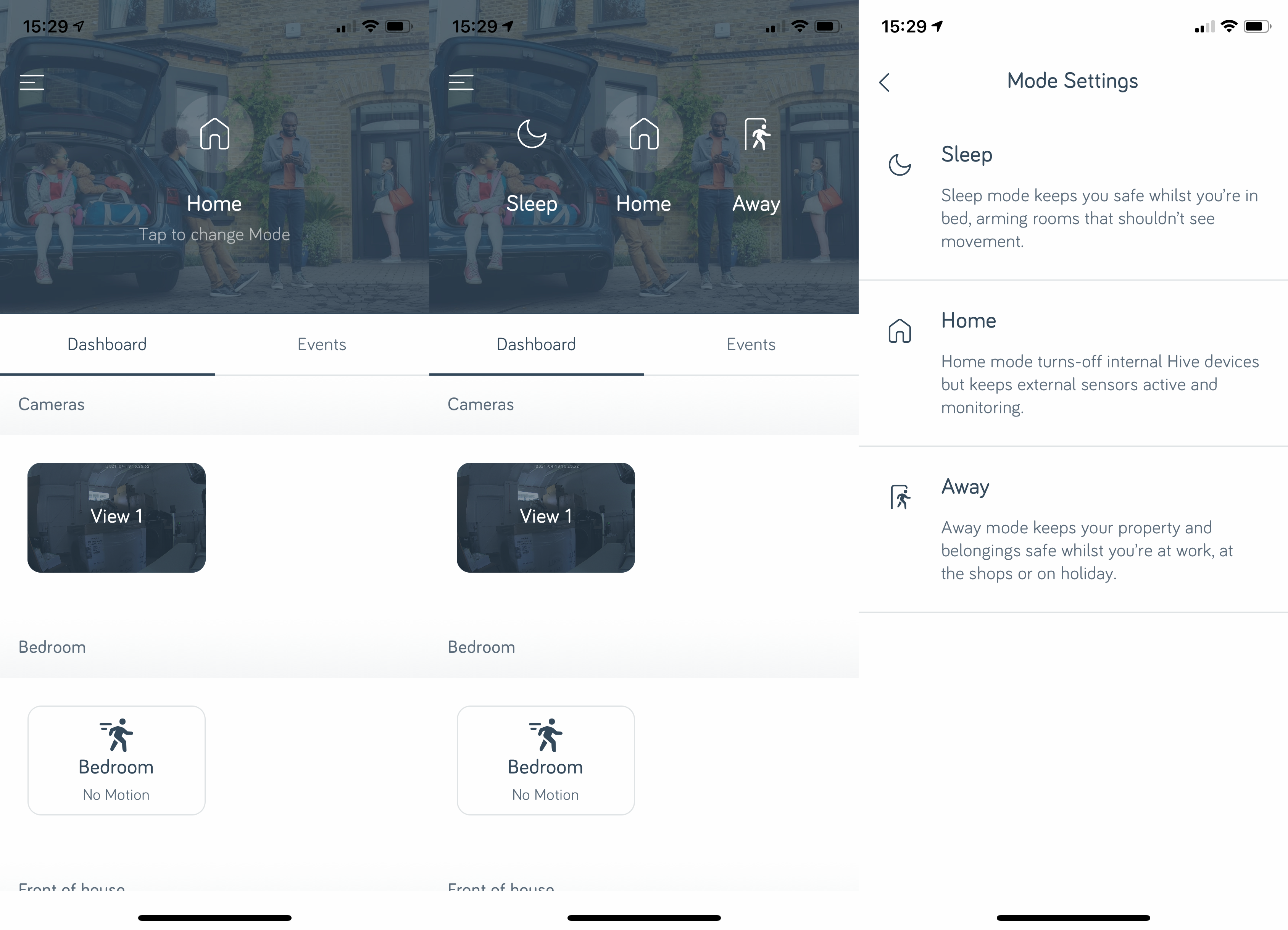 For all three modes, you can choose how your cameras will work and if they’ll actively monitor your home. This is a neat way to choose when cameras will record, and you’ll get fewer clips of you just walking around your own home. Ring has a similar trick with modes and cameras for its alarm system.

Where things get a little smarter is with how HomeShield can use your devices. For starters, you can have your cameras trigger the siren if you want – although I’d be wary of using this feature on external cameras and careful of using it on internal cameras, since they can be triggered by minor movements.

To cut down on the number of times the siren goes off, Hive has a Multi-trigger option. With this enabled, the alarm will only sound if more than one sensor is triggered, such as a door sensor and a motion sensor. I’ve not seen this as an option before, but it’s potentially useful in Sleep mode, for example, since it prevents accidents (such as opening the wrong window) from triggering the alarm.

Control of modes is via the app or the keypad. Each person that you invite to use the system can have one of three roles. Partner has similar controls as the owner, apart from they can’t install devices or invite other people. Family members can change modes and view activity. Guests can arm and disarm the system, schedule when access is available, and even set an end date. The latter type is great for cleaners or tradespeople who only need limited access to your home. Cleverly, every person you invite gets their own PIN. 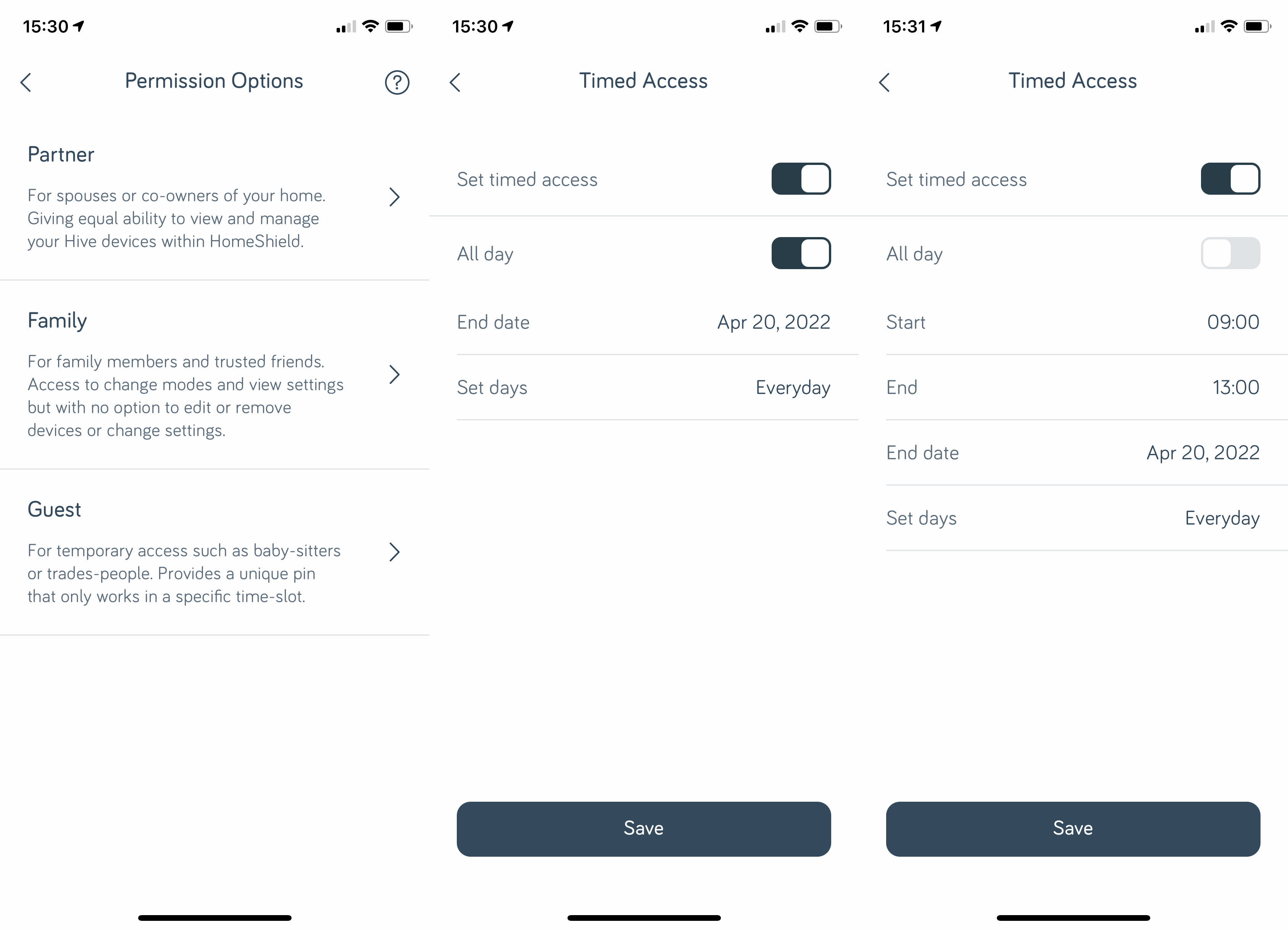 From the HomeShield Dashboard, you can view the status of your alarm system and any devices in it. Tap any of your cameras and you can see a list of clips or playback. From the Events tab, you can view when your alarm mode was changed and who changed it. What’s particularly clever about HomeShield is that all of your sensors can also be used in Actions. Want to have a light turn on when a door sensor is opened? No problem – this is easy to program. Or, you can have your siren light turn on automatically when your Hive Outdoor Camera spots motion, turning off automatically after 15 minutes. 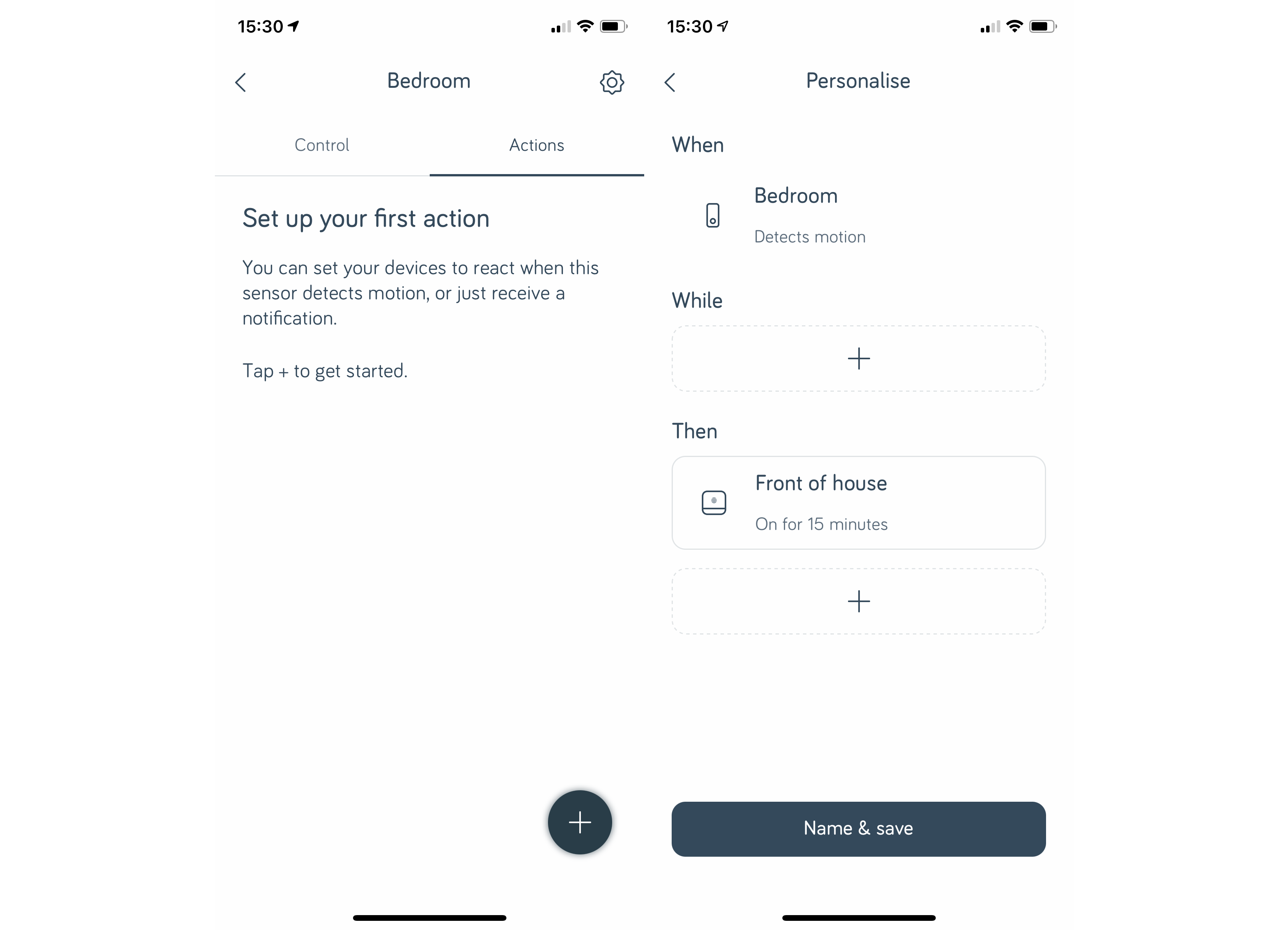 Actions are powerful, but they’re a little limited in some cases. While you can restrict when an Action is run based on set times or when it’s dark outside, you can’t run them based on mode, which would be useful. It would also be handy to have a mode change trigger an action – say, turning the Heating down and turning off all lights when Away mode is selected.

Amazon Alexa and Google Assistant support are available, so you can arm and disarm your HomeShield system using your voice (disarming requires a voice PIN). The Hive system does support Apple HomeKit, but the alarm system isn’t supported right now.

It’s quick and easy to change the mode from the keypad or app. By default, it takes 30 seconds before the alarm is set, giving you time to get out of the house. You can extend this or drop it down to 10 seconds. Likewise, you have the same level of control over the countdown time before an alarm is triggered.

When a sensor is set off, an alert is sent through to your phone. This is  handy, since you can tap the alert to bring up the app and turn off the alarm, or you can use the keyboard. If the alarm isn’t disarmed in the set time, the siren is set off. It’s rated at 110dB, and it’s super-loud: definitely enough to attract attention.

You’ll also receive a notification to your phone, which lets you see what triggered the alarm and view camera footage. If you spot people breaking into your home, the in-app Emergency button lets you call the police directly. It’s handy, but it relies on you having seen the notification, which can be easy to miss as a text message or unimportant app. If you need the police to respond faster, you’ll need to sign up for an alarm system that offers police dispatch, such as Abode, or one that will call you directly so that the notification is harder to miss, as is the case with Ring.

For those who already have Hive and its sensors around their home, HomeShield is a clever upgrade that provides proper security. It’s a clever system even if you don’t have Hive, combining home automation with security. Yet, as good as the system is, the £9.99 a month fee is significant, especially considering that you don’t get automated police dispatch or cellular backup. If you want to monitor your alarm yourself, the Ring Alarm has a free tier, plus assisted monitoring and cellular backup if you upgrade to Ring Protect Plus; if you want police dispatch, Abode is a better choice.

If you’ve got Hive already and have sensors around your home, HomeShield is a neat upgrade that can use your existing kit to give you a full smart alarm system.

The monthly subscription cost is high, especially since this doesn’t cover you for police dispatch or provide cellular backup. If you’re starting from scratch, there are better value smart alarm systems available.

Do you need a subscription to use HomeShield?

If you want to use all of the modes and use your phone to arm/disarm the system, you require a subscription. Without the monthly fee, you get only a limited set of features.