As the battle between plasma and LCD for our big-screen buck intensifies, you can’t help but wonder if the arrival of Hitachi’s L42VP01 isn’t somehow prophetic of the way the war is going. Why? Because even though Hitachi has long been one of plasma technology’s most vocal supporters – to the extent of putting its money where its mouth was barely a year ago by co-financing a pro-plasma marketing campaign with Panasonic and Pioneer – the L42VP01 is a 42in TV that uses LCD rather than plasma technology.


In other words, Hitachi, for whatever reason, has had to swallow its professional AV pride and jump aboard the big (42in and more) LCD bandwagon for the first time. We suspect this ‘reason’ has much to do with Joe Public’s cash and the amount being spent on LCD rather than plasma technology. But hey, maybe that’s just us. Doubtless Hitachi’s more face-saving take on the situation would be along the lines that LCD technology has finally advanced to a point where it is capable of delivering the sort of quality big-screen AV performance Hitachi wants to provide. 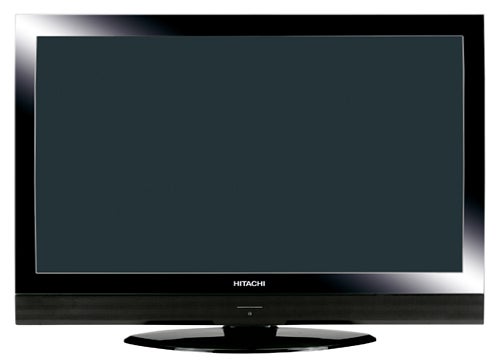 Anyway, this is all hearsay and speculation. Getting back to the hard facts of the L42VP01’s LCD nature, we find its screen containing a full HD resolution of 1,920 x 1,080 pixels; a built-in digital tuner; and an eye-catchingly high claimed contrast ratio of 10,000:1, which uses dynamic contrast processing to reduce brightness during dark scenes and so boost black level response. The screen’s ‘native’ contrast ratio is a considerably more conservative 1,500:1.


It has to be said that these specifications look pretty respectable for what is, after all, Hitachi’s debut 42in LCD screen. And they certainly aren’t bad given the £720-ish price tag. In fact, some of the numbers we’re talking about raise the genuine possibility of this LCD outperforming Hitachi’s latest plasma models. Especially, as, um, those plasma models aren’t actually all that great…


Aesthetically, the L42VP01 is nothing to write home about. It’s just a pretty straightforward black rectangle. At least it’s not unnecessarily ostentatious, we guess. And in a move we’d love more manufacturers to follow, it ships with both desktop stand and wall mount fittings in the box.

Connections are up to spec, too, for such an affordable TV. Top billing is taken by two HDMIs, especially as these are able to take in 1080p/24fps feeds from Blu-ray and HD DVD players. Plus you get a D-Sub jack for PC connection, component video inputs for the hooking up for old Xbox 360s and progressive scan DVD players, and all your usual ‘analogue’ basics like SCARTs, S-Video and composite video inputs.


Where the L42VP01’s aggressive price does start to affect things, though, is with its features. We’re used to Hitachi TVs sporting some of the longest features lists in town, but the L42VP01’s is relatively thin on the ground. Probably the single most significant thing it doesn’t have is Hitachi’s Picture Master HD image processing engine, a system that’s really helped pictures out on many previous Hitachi (small screen) LCD and plasma offerings.


You also don’t get access in the picture menus to such arch Hitachi fine-tuning twitchery as LTI improvement, CTI improvement, a 3D Comb Filter and so on. Instead the only even vaguely interesting stuff consists of a straightforward noise reduction system and a film mode for making motion look cleaner during movie as opposed to video sources. 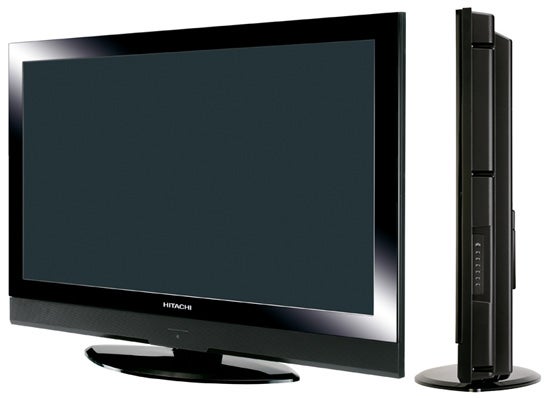 So how does the L42VP01’s performance stack up against Hitachi’s plasmas? Not bad, actually, at least with high definition.


The first thing that struck me during a trudge-through of the latest ”Pirates of the Caribbean” movie on Blu-ray was how immensely sharp and detailed HD images look. Every pixel of that full HD resolution is put to use, leaving Hitachi’s HD Ready 42in plasmas looking a touch soft by comparison.


Colours better those of Hitachi’s plasmas, too, in their subtlety of blend. The L42VP01’s full HD pixel count helps blends appear almost infinitely smooth in their gradations, whereas with Hitachi’s plasma TVs there’s often evidence of banding.


Another string to the L42VP01’s bow is its brightness, as images positively blare off the screen, leaving Hitachi’s plasmas looking like dullards by comparison.


Not that this brightness has been achieved at the expense of any sort of black level quality, though. In fact, the screen’s black levels are deeper and more credible during the darkness of ”Call of Duty 4’s” insanely hard (on Veteran level, anyway) missile silo level than they are on many a more expensive LCD rival. Plasma screens certainly make it even easier to see that last sneaky Russian hiding in the distant shadows waiting to ruin your Veteran dreams for the umpteenth time, but by LCD standards, the L42VP01 is at least respectable.

Perhaps the L42VP01’s most surprising strength is how noiseless its HD pictures look. We wouldn’t have been at all surprised to find trouble from grain and dot crawl at the very least given the lack of the Picture Master HD system, but things generally look as clean as the proverbial whistle.


None of this is to say, though, that Hitachi’s first trip into big-screen LCD waters has been an unmitigated success. For starters, while HD material looks the business in many ways, it does have one pretty serious flaw: its colours look a bit muted and, as a result, occasionally unnatural in tone.


The general extreme sharpness of HD pictures on the L42VP01 is also dented slightly by some gentle resolution loss when showing fast-moving objects, in classic LCD style. 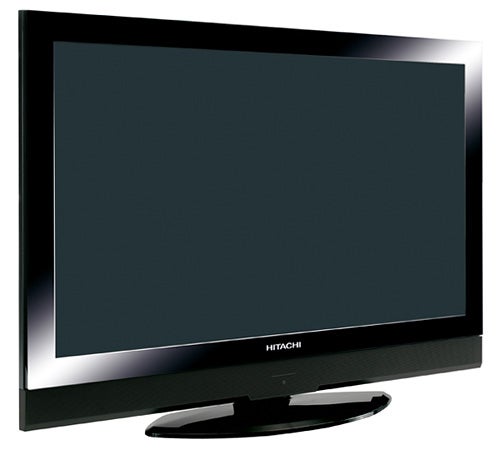 Troubling, too, is how far pictures deteriorate when you swap to standard definition. Particularly striking is how relatively soft and short of detail standard definition images look, suggesting that the L42VP01’s image scaling engine really isn’t the best (ah, Picture Master HD, how we miss you…). But standard def images also suffer with less consistent colour tones and slightly more motion blur.


Sonically, the L42VP01 is a generally very likeable proposition. Tucked away within the set’s slender frame are speakers of surprising power and range, and which prove able to deliver the bombastic shenanigans of our ‘Pirates 3′ Blu-ray with more frequency range and sheer volume than you’d expect.


Provided you’re able to get as much high definition material into its diet as possible, even with its slightly muted colour palette, the L42VP01 is worth considering for its very low price. If good old standard definition Freeview is still your main TV source, though, you’re probably best advised to look elsewhere.