The DVD-based camcorder has become a consumer favourite. For those who don’t want to mess with editing video or even transferring it to another medium, there’s great appeal in simply pulling the disc out of the camcorder and popping it straight into your DVD player to watch.


But in the move to high definition, the same can’t be said of DVD-based camcorders recording in the AVCHD format. There are some Blu-ray players which will read DVDs with AVCHD recorded onto them, but that doesn’t address the other problem – capacity. A 1.4GB 8cm DVD will store 20 minutes or less of HD footage. 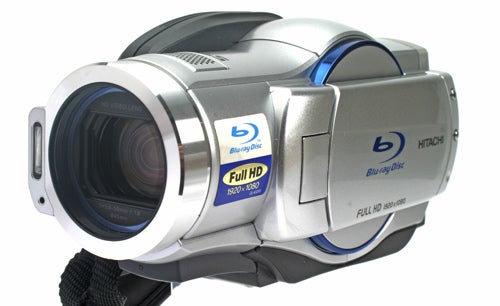 This is where Hitachi’s DZ-BD70E comes in. Instead of 8cm DVDs, it records to 8cm Blu-ray, which has a 7.5GB capacity. That’s enough for over an hour of footage, even using its top quality setting and shooting at the Full HD resolution of 1,920 x 1,080. 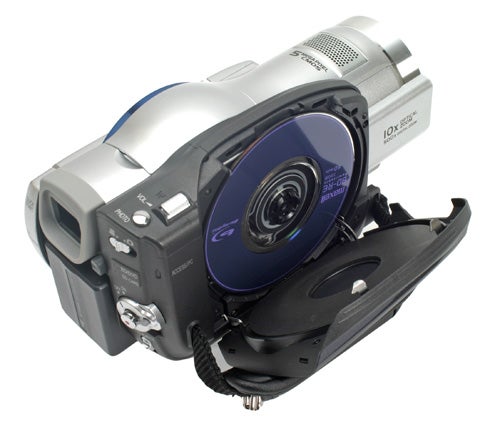 The BD70E is equipped with a large 1/2.8in CMOS sensor sporting 5.3-megapixels, but only 2.07-megapixels are actually used when shooting video. The remainder only come into play for still images, which can be captured at 2,400 x 1,800 pixels. There are five different video recording modes available; three high definition and two standard definition. Only the top HX mode uses the Full HD resolution, with a 15Mbits/sec data rate. The other two use 1,440 x 1,080, with 11Mbits/sec or 7.5Mbits/sec data rates. You can choose between 9Mbits/sec and 6Mbits/sec for standard definition. 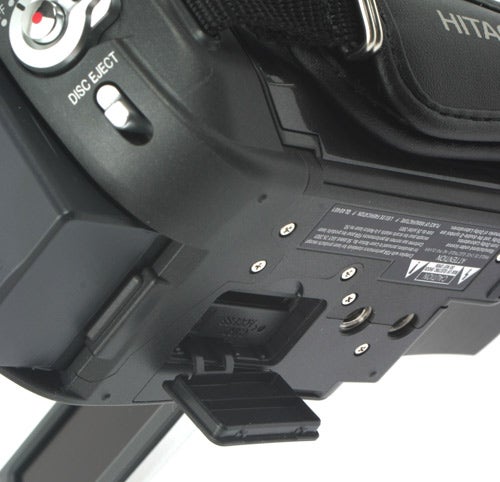 Although 8cm Blu-ray discs are the main recording medium, DVD-RAM, -RW or +RW are required to record standard definition. There is an SDHC slot on the bottom, too, for still images. If you fancy covering all bases, Hitachi also makes the BZ-BD7HE, which has a 30GB hard disk as well.

Hitachi has sensibly given the BD70E a few features to please the more serious videomaker, although it’s hardly a full complement. Lurking beneath a plastic flap on the top is a standard accessory shoe, and even more carefully hidden to one side of the lens is a microphone minijack. But curiously there is no headphone socket. 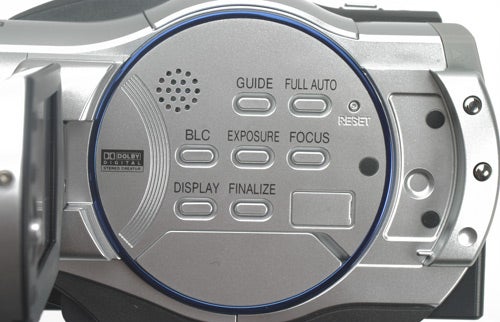 Discrete buttons found inside the LCD panel area toggle manual settings, with the joystick on the panel itself used for configuration. However, there are only a few options available. There’s a button for enabling manual focusing, and manual exposure control with 12 steps. But this bears no direct relationship to F-stops, and with no shutter control you won’t be able to tell how much iris, shutter, or video gain is involved in each step. The only other manual control button is for back-light compensation, although we found it to be rather ineffective.

With the Hitachi’s large CMOS sensor and Full HD shooting, we had high hopes for its image quality. In good lighting, it’s merely average, however. Colour fidelity is good, with vibrant reds and greens. But the autofocus is a little sluggish, taking a second or two to react when zooming from foreground to distant objects. We also noticed a tendency to over-expose when we zoomed from a mixed wide shot to a close-up, forcing the use of manual exposure to compensate. 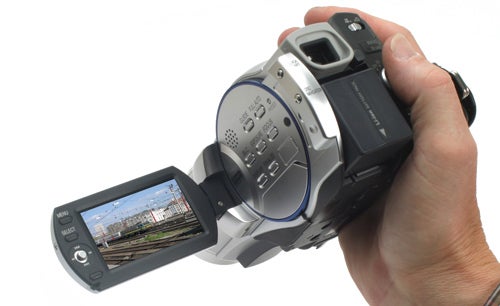 However, low light capabilities are the real disappointment. Perhaps we’re getting spoiled by what the best current CMOS-based HD camcorders from Canon and Sony are now capable of. But the Hitachi’s video looks very grainy indeed in poor illumination, even though there is still plenty of colour. Using our regular ‘living room with 100W ceiling light’ test, the Hitachi was only on par with bargain £300 SD models using 1/6in CCDs. Yet it costs twice the price. 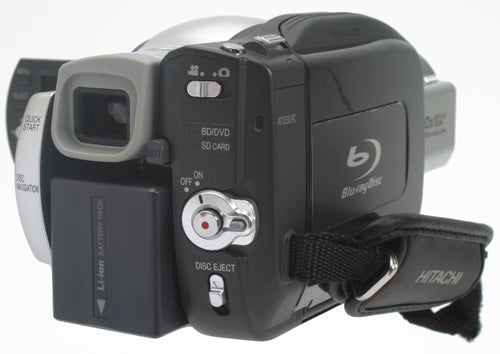 When it comes to watching your footage, the Hitachi offers a plethora of possibilities. The obvious one is simply to pull the disc out of the camcorder and stick it into your Blu-ray player. We loaded a BD-RE disc we had recorded into a Panasonic DMP-BD50, and the clips were played without issue. However, BD-R discs have to be finalised before playback, after which no more recording can be performed. DVDs do as well, but in the case of rewriteable discs, they can be unfinalised later for further recording. Fortunately, the BD70E also incorporates a full-sized HDMI port, so you can play footage straight from the camcorder on your HDTV. But only composite and S-Video options are available for analogue connectivity, not component.

For editing, you can either stick the discs in your PC Blu-ray drive (or DVD drive for DVDs), or you can hook up via USB. However, we had trouble getting either to work with HD footage. The BD-RE disc couldn’t be read by our test PC’s LG Blu-ray drive, and the camcorders own optical drive was not readable over USB 2.0 under Windows. The only method which worked was installing the supplied Pixela ImageMixer 3 HD software. This then allowed us to browse the Blu-ray disc’s contents, which could be saved to a hard disk location of our choice. The result was a MTS file that could be edited in CyberLink PowerDirector 7, Pinnacle Studio 11.1 and 12, Ulead VideoStudio Plus 11.5, and Sony Vegas Pro 8. But of course no app from Adobe would support it without a plug-in. 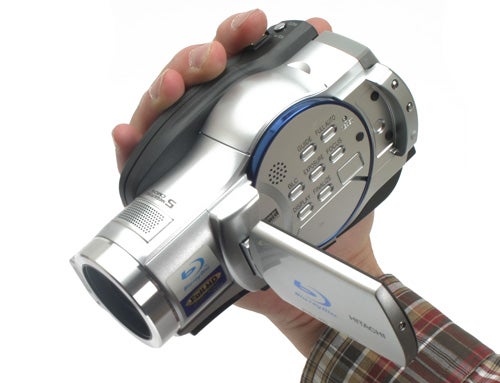 
Hitachi wins top marks for bringing the storage capacity of Blu-ray to camcorders, so optical discs can now hold a useful hour or more of footage. The ability to pop these discs into your set-top player has tremendous appeal, too – assuming your player is compatible. But the DZ-BD70E is merely average as a camcorder. The grain in low light will be a disappointment to those expecting a leap in image quality from HD. The £770 price is rather steep, too, when Canon’s awesome HF10 can now be had for £100 less. Media isn’t cheap, either, with a 7.5GB BD-RE disc priced at around £20. So this is a noble technological effort, but there are better camcorders around for less.