As anyone who’s ever looked into getting their hands on a truly enormous flat TV knows only too well, such home cinema dream machines don’t come cheap. In fact, stepping above 50in in the flat TV world will usually set you back upwards of seven grand. Yet today we find ourselves confronted by a 55in plasma TV, Hitachi’s 55PD9700, that’s yours for just £2,800. Surely such an extreme-value proposition can’t actually be any good, can it?


It starts well, at least, by looking pretty plush. Its ‘Japan Black’ screen frame is opulently glossy, while the dark silver speakers protruding from either side provide a tasteful contrast. The 55PD9700 even comes on a motorised pedestal stand, allowing you to adjust its angle by 30 degrees left or right via the remote control. Nice. 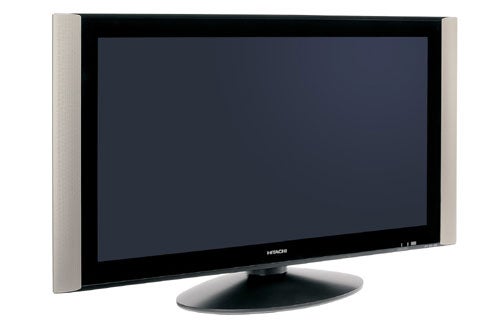 Unlike many megasized flat screens out there, the 55PD9700 was designed from the ground up for domestic rather than corporate users – something emphatically confirmed by its connections, which include those home cinema essentials of two HDMI inputs, component video inputs, three Scarts, a PC jack and an aerial input. Even better, this aerial input connects to a digital tuner, with further digital connection support coming from a CI slot for adding digital subscription services. And we’re not done with the connectivity yet, as the TV also thoughtfully provides an SD card slot for direct play back of digital photos, and a USB interface where non-SD users can attach a multi-format card reader.


The 55PD9700’s panel comprises 1,366 x 768 pixels, ensuring compliance with the industry’s HD Ready requirements, with other key specifications including a so-so 1000:1 claimed contrast ratio and a promisingly high 1400cd/m2 brightness.

It’s also worth pointing out that the 55PD9700 uses Hitachi/Fujitsu’s e-ALIS technology. This is based on the vanilla ALIS (Alternate Lighting of Surfaces) technology sported by the Hitachi 42PD9700 we tested a few weeks back, in that it seeks to reduce electrode density by sharing one electrode between two scan lines rather than using one electrode for one scan line.

But while the basic ALIS system attempts to do away with visible horizontal ‘blanking lines’ by using unbroken vertical phosphor channels, e-ALIS uses a more sophisticated grid system of phosphors enclosing each separate plasma chamber/pixel – an approach that apparently helps the pixels react more accurately to the picture signal. e-ALIS is also a progressive technology, meaning it shows all the lines of a picture signal simultaneously, whereas ordinary ALIS is a traditional interlaced system. Still with us? Good. Because we’re not done with the high-tech stuff yet…


For instance, the 55PD9700 employs a new, apparently superfast 1080p video processing engine, which upsamples incoming images to 1080i, then converts that picture into a 1080p frame for extra stability and resolution, before converting the 1080p signal again to correspond to the 1,366 x 768 native resolution. Please note, though, that this talk of 1080p processing does not, alas, mean the TV can accept 1080p source signals. 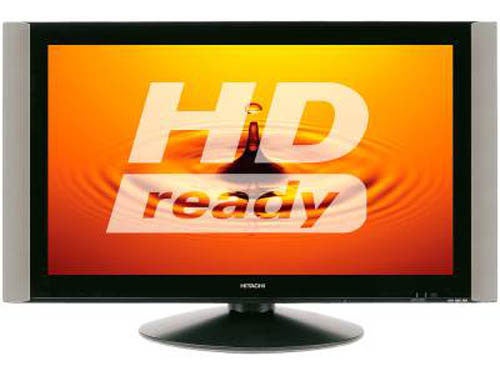 The final key ‘behind the scenes’ trick up the 55PD9700’s sleeve is its Picture Master HD image processing engine, a proprietary Hitachi system that claims to deliver such goodies as faster processing for improved motion handling; full digital image scaling; automatic optimisation right down to pixel level of brightness and gamma levels; a histogram for improving brightness and contrast while also tackling video noise; sharper edges; 12-bit colour processing; and a 3D comb filter.


All this and we haven’t even touched on plentiful ‘front of house’, user-adjustable features the 55PD9700 provides. We haven’t the space – or, honestly, the will at this point! – to cover all these in detail, but we can reveal that highlights include a black level booster, picture in picture tools, separate chroma and luminance noise reduction routines, plus 7-day Electronic Programme Guide support for the digital tuner.


Up to now, absolutely nothing about the 55PD9700 provides an indication of how Hitachi has managed to make the TV so cheap. So we’re frankly fearing the worst about its picture quality.

But you know, it’s really not bad at all. Chief among a healthy roster of positives is the set’s colour handling finesse. Tones across what appears to be a very wide colour spectrum are almost all rendered with complete authenticity – even the rich reds and greens which occasionally look off key with its 42PD9700 sibling. What’s more, colour blends are delivered with outstanding subtlety, helping the image look unusually three-dimensional, clean and realistic. This even applies to dark scenes and picture areas – the Achilles Heel of so many flat TVs.


The 55PD9700’s HD pictures are crisp and detailed, too – but crucially not overly so. In other words, while pictures are easily sharp enough to deliver the extra impact of HD sources, they don’t take things so far as to start looking harsh. Add to this the 55PD9700’s impressive suppression of grain; perfectly rendered and ghost free contouring; plus smear-free motion, and it becomes clear that Hitachi has developed its picture ‘flavour’ here with naturalism rather than exhibitionism in mind – a philosophy that rests very easily with us. 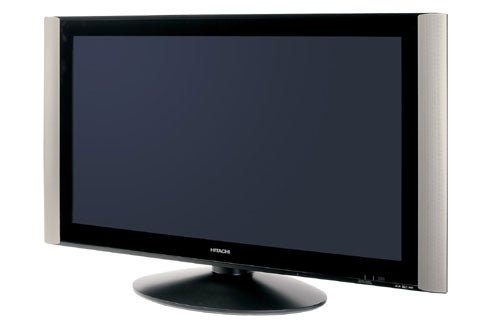 That said, there is still room for improvement. First and worst, the generally impressive attempts at suppressing picture noise have let one old-school plasma problem slip through the cracks. Basically, as objects – especially people – move across the screen they sometimes generate some obvious fizzing noise as the plasma panel struggles to keep up.


Next, although we like the amount of detail and colour subtleties the 55PD9700 reveals in dark picture areas, black levels are undeniably not exactly the deepest around, appearing with a slight grey wash over them.


Third, while PC graphics and Xbox 360 games look very nice indeed for most of the time, just occasionally we detected traces of a vague pixel structure over particularly bright image portions. It also occurred to us that while the Hitachi’s unusually subtle approach to colours can help films look more natural, it can also leave vibrant games feeling a touch muted.


Impressively the 55PD9700 has the audio power to actually do its massive pictures proud. With no less than 10 speakers in its bodywork, it produces one of the widest, deepest, cleanest and richest soundstages we’ve heard from a TV.


Although the 55PD9700’s picture glitches mean we can’t quite give it an absolutely unreserved recommendation, it’s still got more than enough features and quality to register off the scale in value terms. And as such it potentially opens the mega-sized screen door to a whole new army of home cinema devotees.