Good cleaning and great drying in a single appliance, the Hisense WDBL1014V is a solid performer – but running costs are high.

What is the Hisense WDBL1014V?

Packed with some great features, the Hisense WDBL1014V boasts an impressive 10kg capacity for washing and 7kg for drying. The inverter motor technology promises a quieter and more reliable washing machine that uses less energy. It offers 1400 spin, a 16-strong programme choice across washing and drying, and a wash-to-dry feature.

The Hisense delivers on its promise of single-appliance convenience with good wash results and excellent drying. The drum doesn’t quite manage 10kg and spin performance isn’t the best, but the tumble dryer’s seriously high running costs could be the only real deal-breaker.

If you plan to use the dryer section infrequently, the WDBL1014V has an attractive asking price for such all-round convenience.

Offering the best of both washing and drying, but taking up just a single space in your kitchen, Hisense’s WDBL1014V is an A energy rated 10kg washer and a 7kg dryer all in one. The 7kg figure for drying is a wet load, so about 5kg dry – which is around half the maximum wash capacity.

At under £450 for this two-stage washing, we wouldn’t expect much in the way of fancy features or designer good-looks. Yet the WDBL1014V ticks all the boxes, including a large porthole, LED display and delay-end option. The cosmetic is clean and simple. 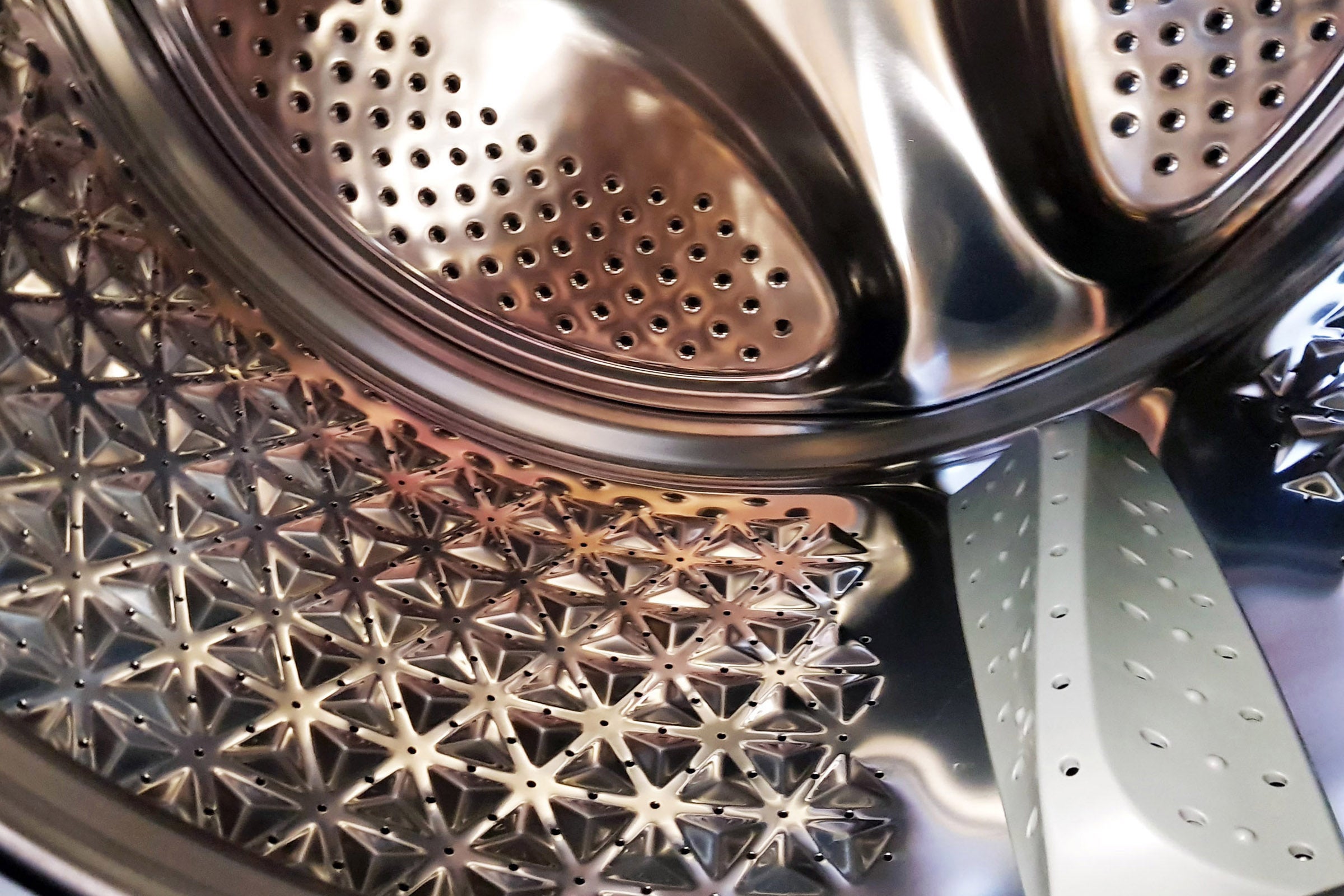 The controller knob is easy to operate and comes with blue segment LEDs to show the programme chosen. The detailed display to the right side is a matching blue-lit panel that completely illuminates for a second or two when the machine first boots up. 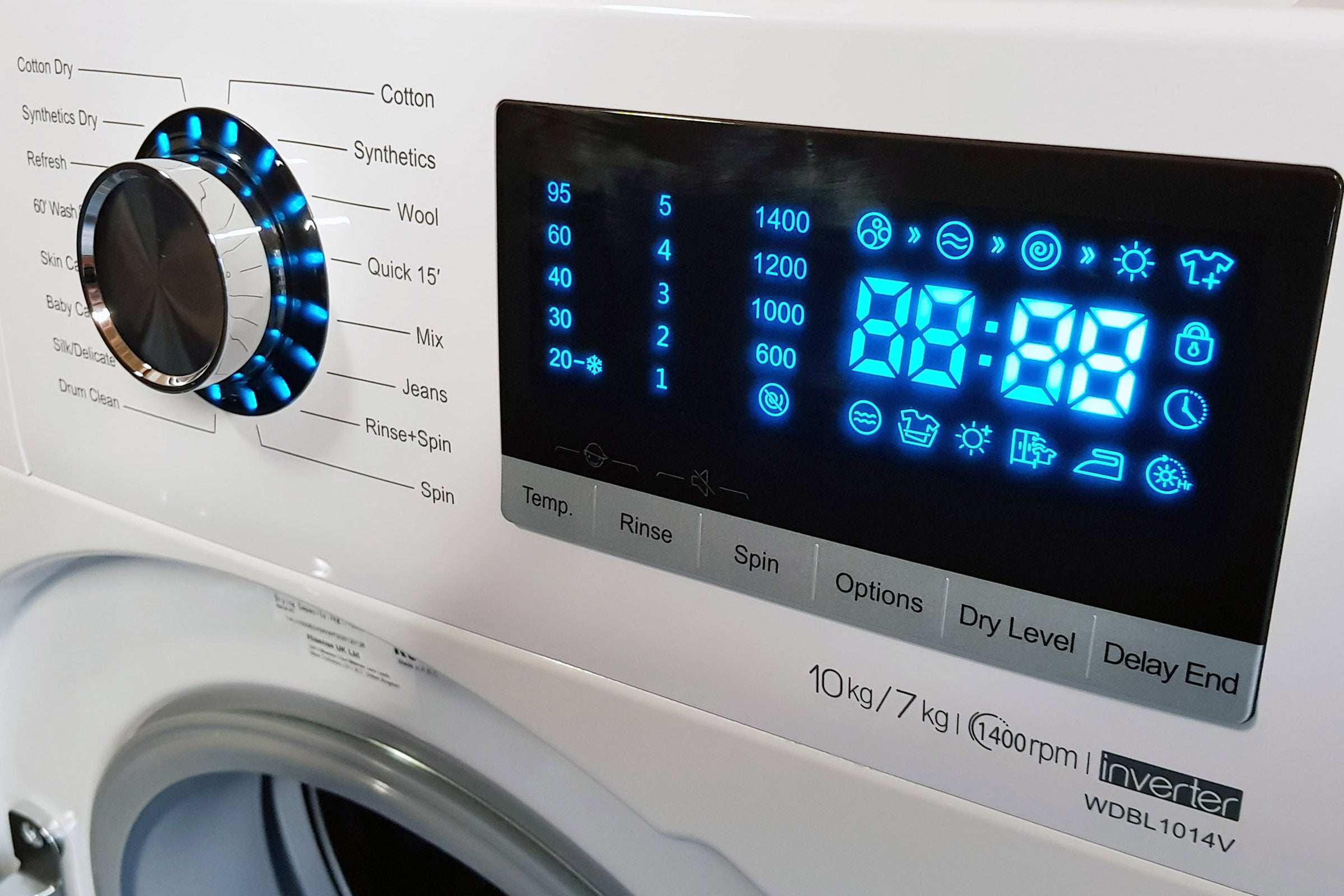 Buttons below the display feel a bit squishy but allow you to alter temperature, number of rinses, spin speed and drying level easily and clearly. The sheer number of icons on the display can be little confusing and many button presses were accompanied by a slightly irritating microwave-like pinging sound, although this can be turned off.

The large double-skinned door is a stylish black, looking a little like a giant vinyl record; it opens to reveal a snowflake patterned drum. This, claims Hisense, promises to remove tough stains as well as washing clothing delicately. However, it didn’t look big enough for 10kg of real-world washing – and, sure enough, our 80% of max cotton load (8kg) wasn’t going to go in without a crowbar. We had to remove about a kilo or so of washing, so in reality, the washing section is nearer a 9kg model. 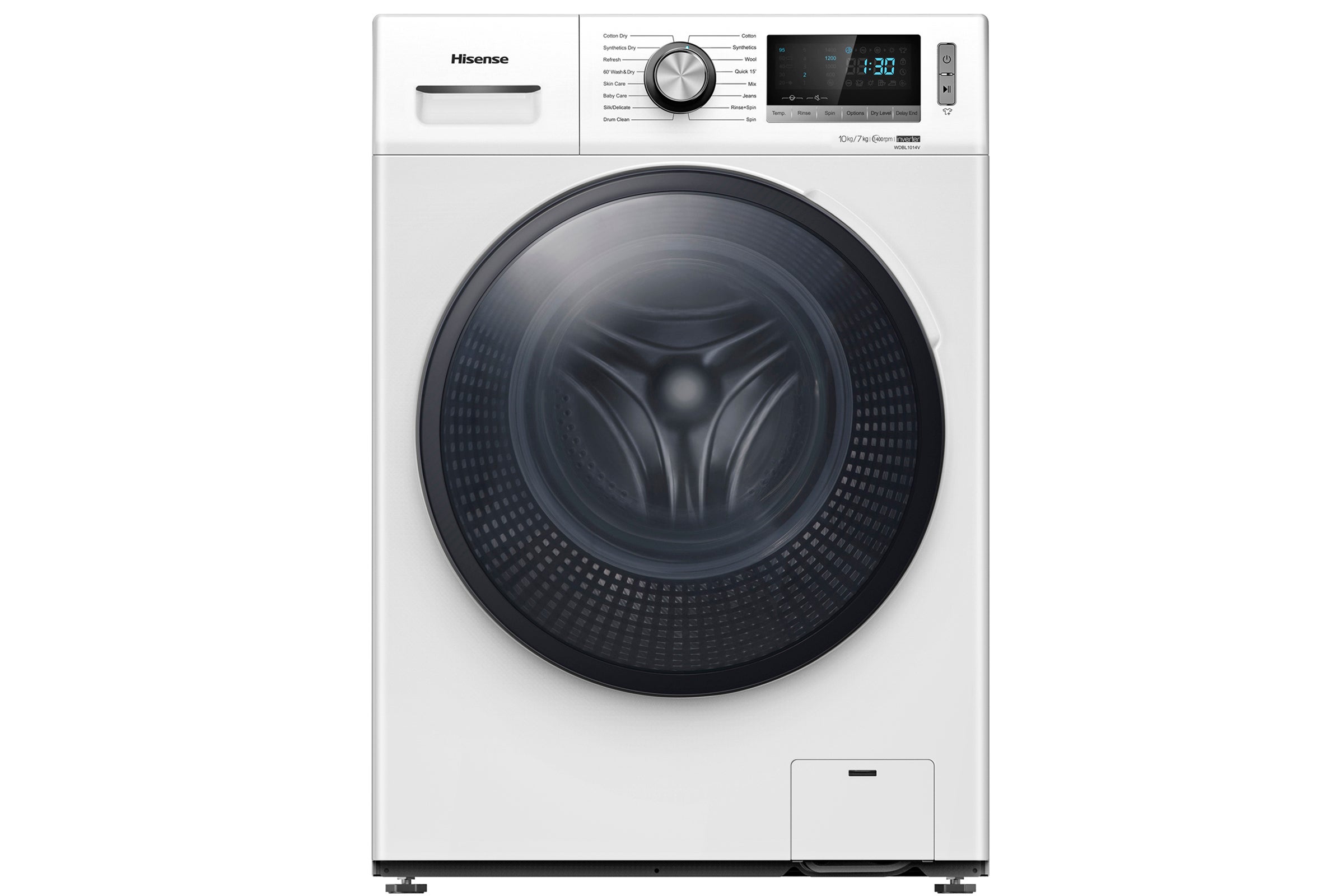 We were equally sceptical that a 7kg load of wet clothing would fit in the Hisense but were nicely surprised as it all went in with ease. Remaining features comprise a standard pull-out soap drawer and a flap covering the pump drain at the bottom. The cover flap requires a blunt knife or fork handle to open, which is more awkward than ideal.

Inverter motor technology is quieter and more energy-efficient than old-style brush motors and this is reflected in the Hisense’s fairly low running noise, particularly at maximum spin. We measured a reasonably hushed 70dB compared to the energy label’s suggested 71dB, and only at full spin. Early, lower-speed spins in the cycle were quieter still. 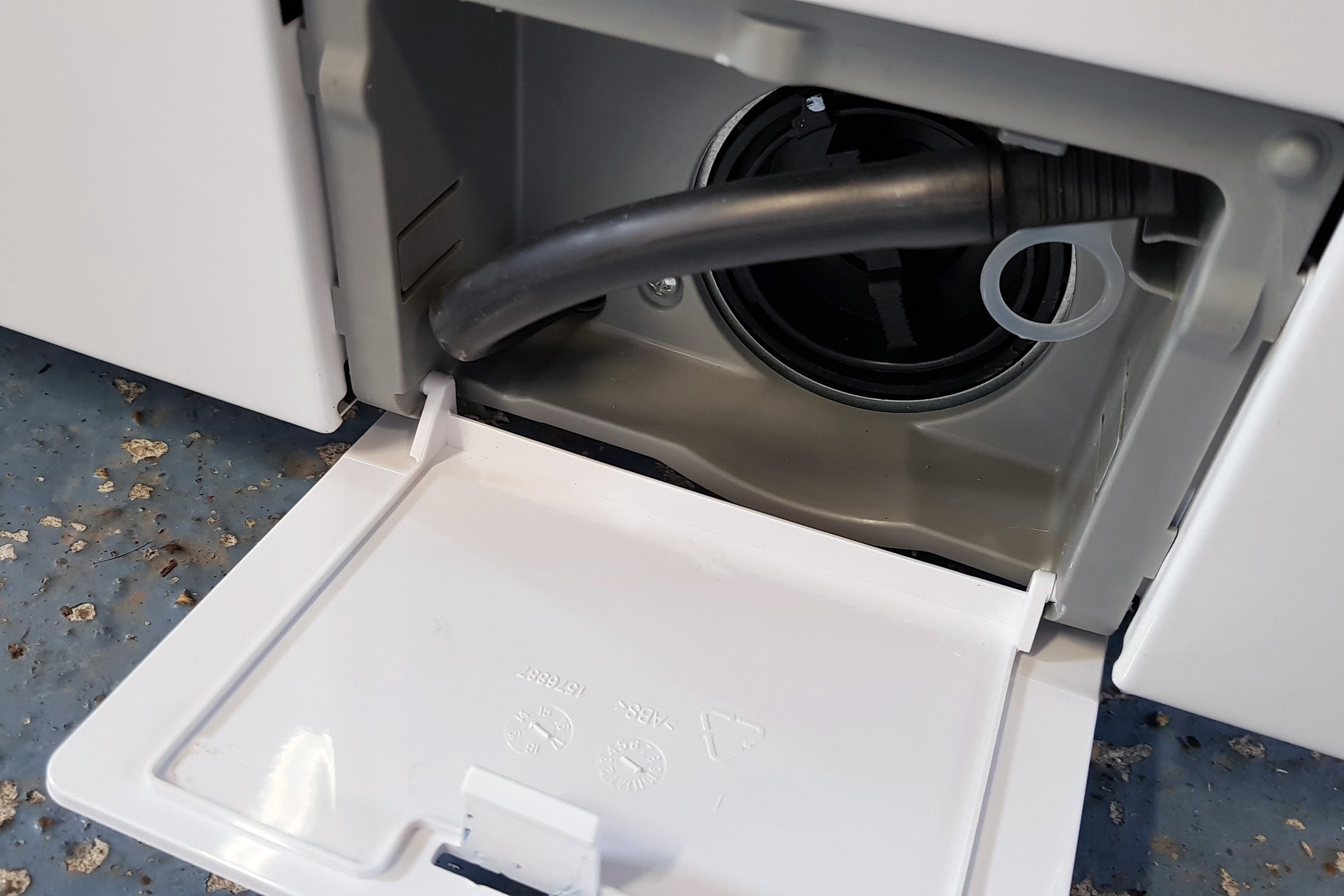 Wash noise was also suitably hushed thanks to a combination of the quiet motor and the double-skin door adding an amount of sound insulation. The machine burbled along most of the wash cycle in the low 50s decibels, but did have a couple of louder moments when the water was running in and the pump was pumping out. It then measured bang on the energy label figure of 56dB, which is still reasonably quiet. 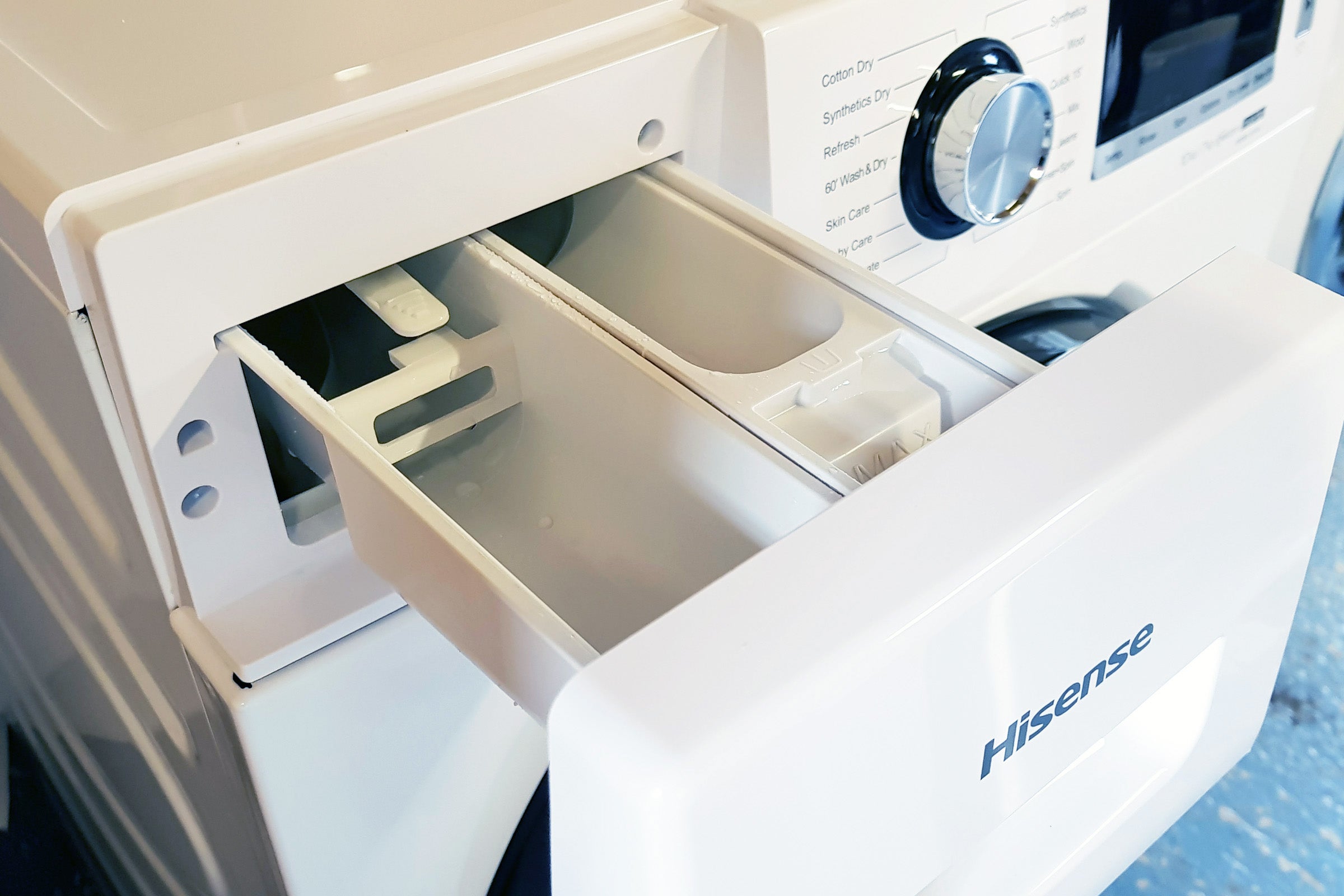 The tumble drying, on the other hand, was much quieter than the energy label stated. 63dB would be noisy for a modern dryer; but we measured 56-58dB. That’s below conversation level so this machine is unlikely to disturb kitchen banter when washing or drying.

Hisense WDBL1014VG – What programmes does it have?

Packed with 16 programmes across washing and drying, an unusual omission was a Cottons Eco programme. Instead, this model relies on its standard cotton wash keeping running costs low and hitting that A-rated energy efficiency. 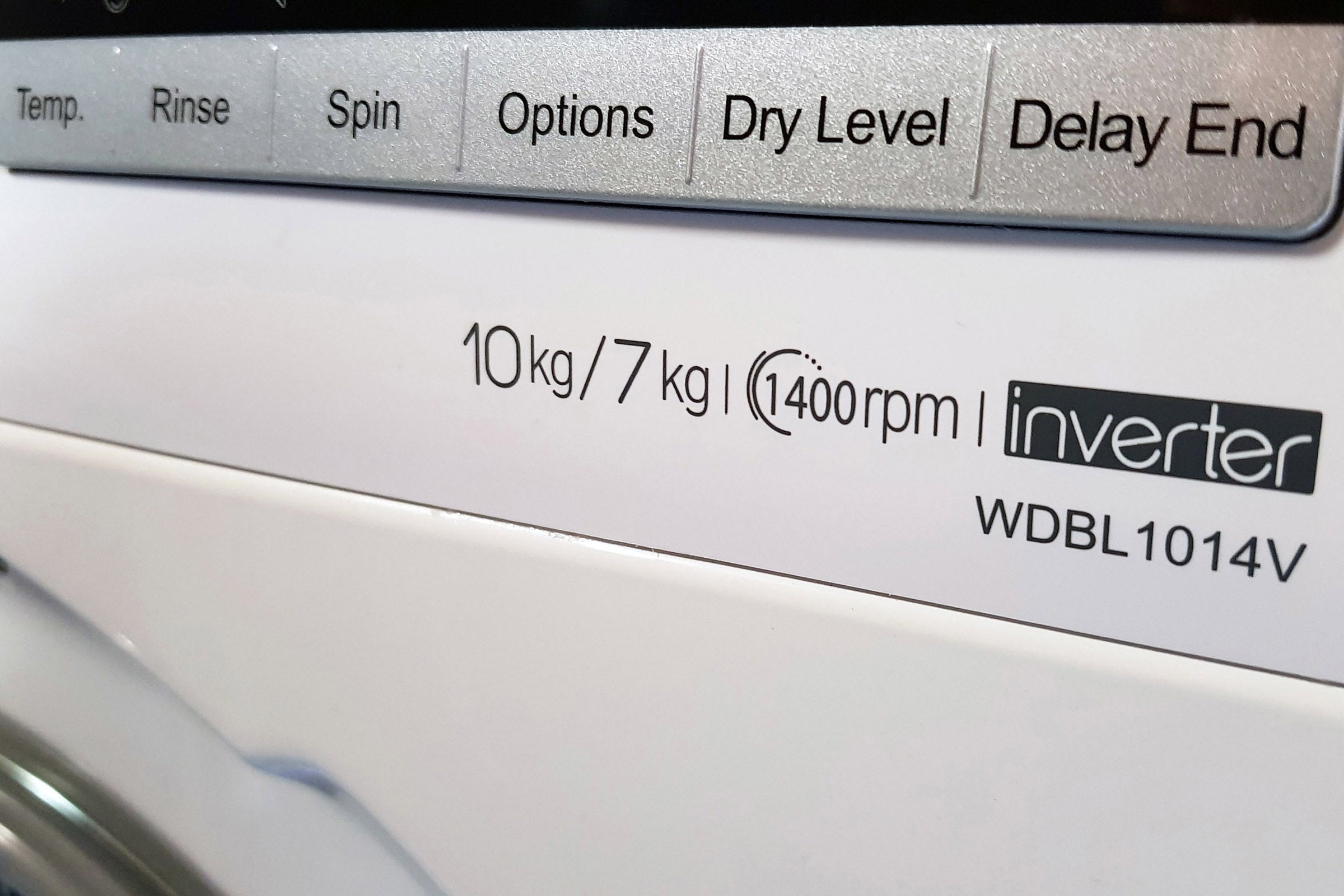 Standard programme fair on the wash side includes Cotton, Synthetics, Wool and Jeans cycles, a Mix wash and a speedy Quick 15 that takes around a quarter of an hour for a 1kg max load. You get a Skin Care programme to ensure efficient detergent removal, a Baby Care cycle that best eliminates bacteria, and a Silk/Delicates wash.

Specific dry programmes include matching Cottons and Synthetics cycles and a handy Refresh option. This is great for rejuvenating clothes that might have tobacco smoke or BBQ odours, for example, and is certainly handy for a quick refresh after a summer afternoon in the garden. 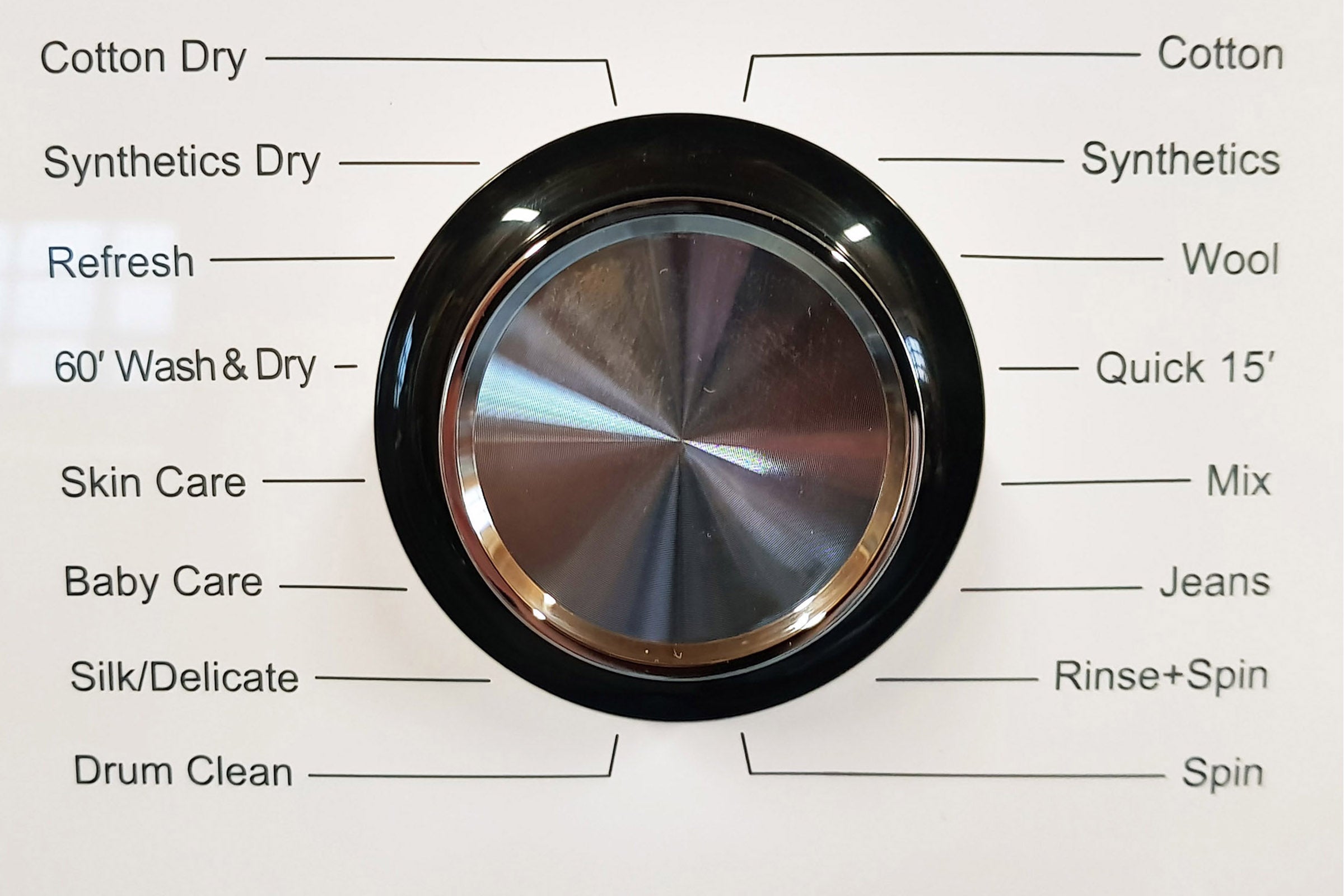 In addition, you can add a drying phase to the Cotton, Synthetics, Mix and Baby Care wash programmes. For a seriously quick wash and dry for a lightly soiled load up to 1kg, the 60’ Wash & Dry programme does just that in under an hour. 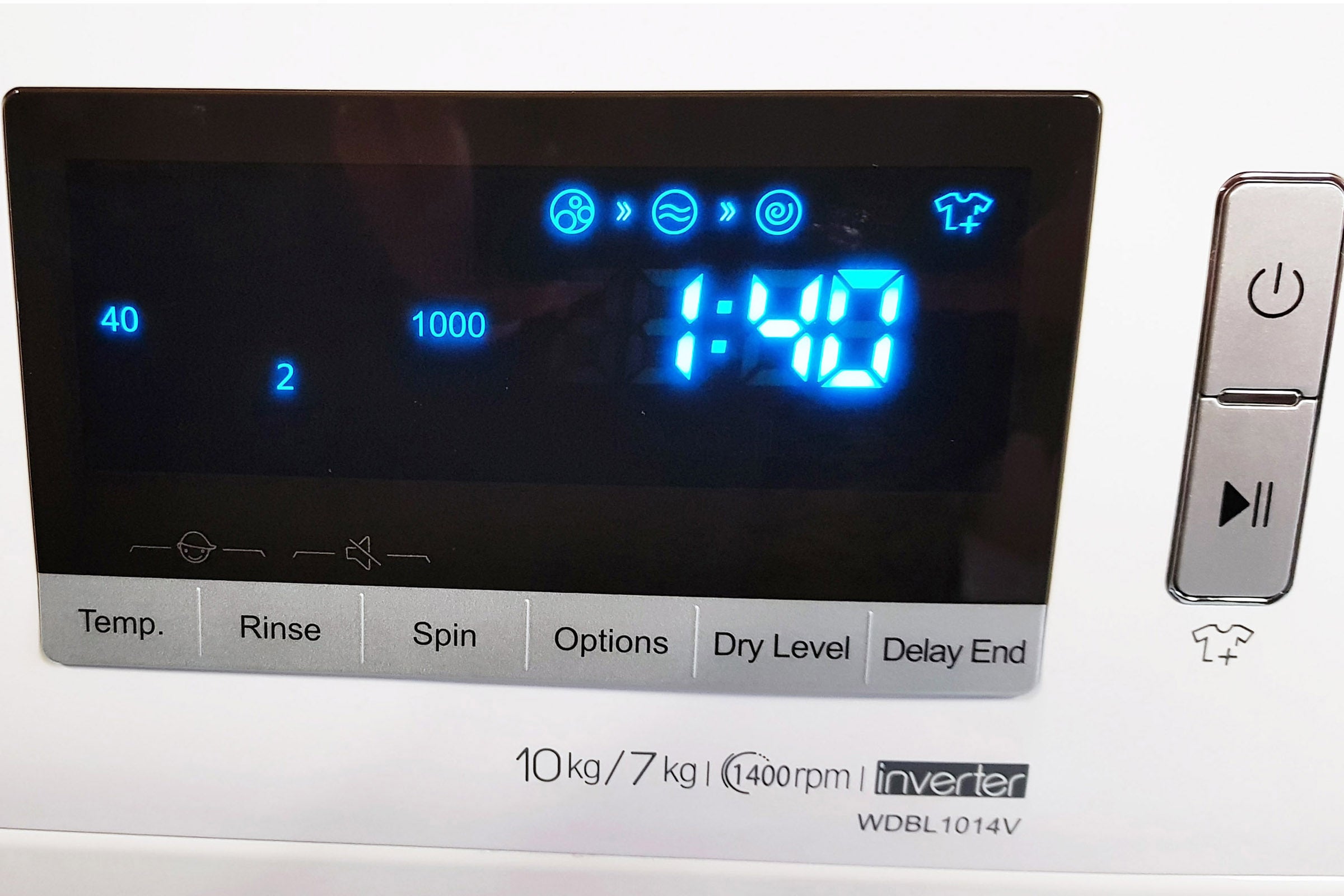 The Hisense is very flexible in letting you tweak most wash programmes by temperature, spin speed and selecting between one and five rinses, with the default being two.  You can add a pre-wash or make the wash cycle more intensive for really dirty garments. For drying, there are three levels – Cupboard, Iron and Extra Dry – plus a time-dry option.

Starting with the standard Cotton cycle set at 40ºC, we attempted to wrestle in 8kg of dry cotton clothing and failed. We removed 1kg for a more manageable 7kg load that did fit into the drum. In went our key test stain strip featuring blobs of blood, coffee, turmeric, cranberry jam, ketchup and engine oil. These were allowed to really dry out and stain the strip for 24 hours prior to the wash. We used a leading brand, non-bio capsule and placed this into the drum. 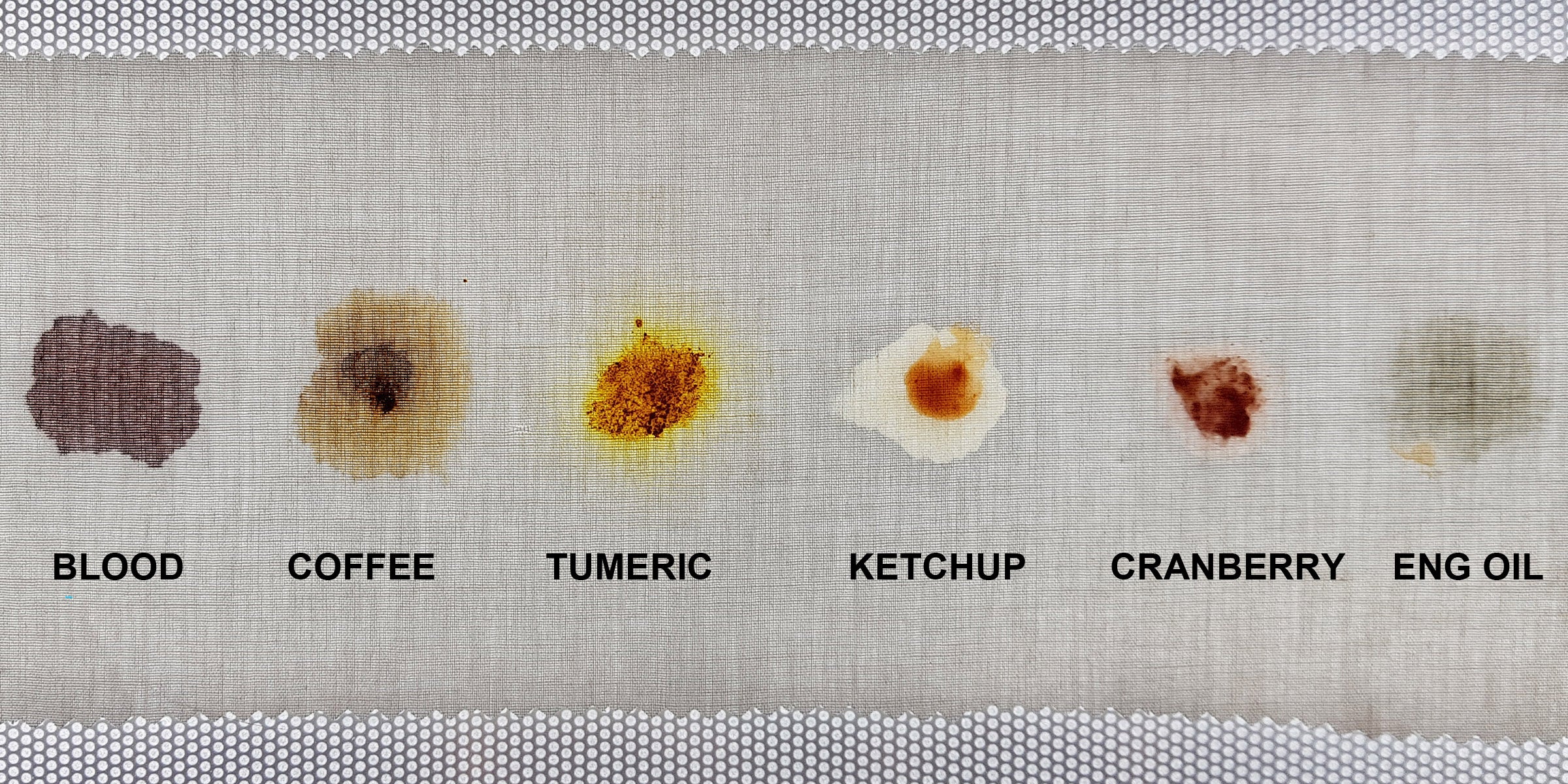 Using almost exactly 1kWh of electricity and 77 litres of water, this main Cotton wash is fairly frugal for such a generous load. Wash results were good with the blood, coffee, cranberry and ketchup stains rendered all but invisible. The turmeric and engine oil hung on tenaciously, the strip actually folding over in the wash and allowing the turmeric to stain an adjacent spot too. While the basic stain-removal is good, the more tricky turmeric and oil weren’t cleaned particularly well using just non-bio detergent.

After the wash, the 7kg load now weighed 9.9kg with the retained water. That’s around 42% of extra load weight in water, which is nothing to write home about for a 1400 spin machine. Between 36% and 39% is average for a 1400 spin machine. Oddly, though, the specification suggests this Hisense has A-rated spin efficiency. Smaller loads fared better, with 4kg dry loads retaining nearer 35% additional weight.

Pure tumble dry results were very good, and exceptional for a washer dryer. Exactly 7kg of wet cottons were dried to perfect cupboard dry throughout with no damp or overly dry spots. That’s unusual in a washer dryer, particularly one as affordable as this Hisense.

However, there’s a price to pay for using the tumble dryer function in terms of both time and energy. This full load took 10 minutes shy of four hours to dry and used a whopping 3.75kWh of electricity. Modern 7kg heat-pump dryers would use half to a third of that energy for the same load. 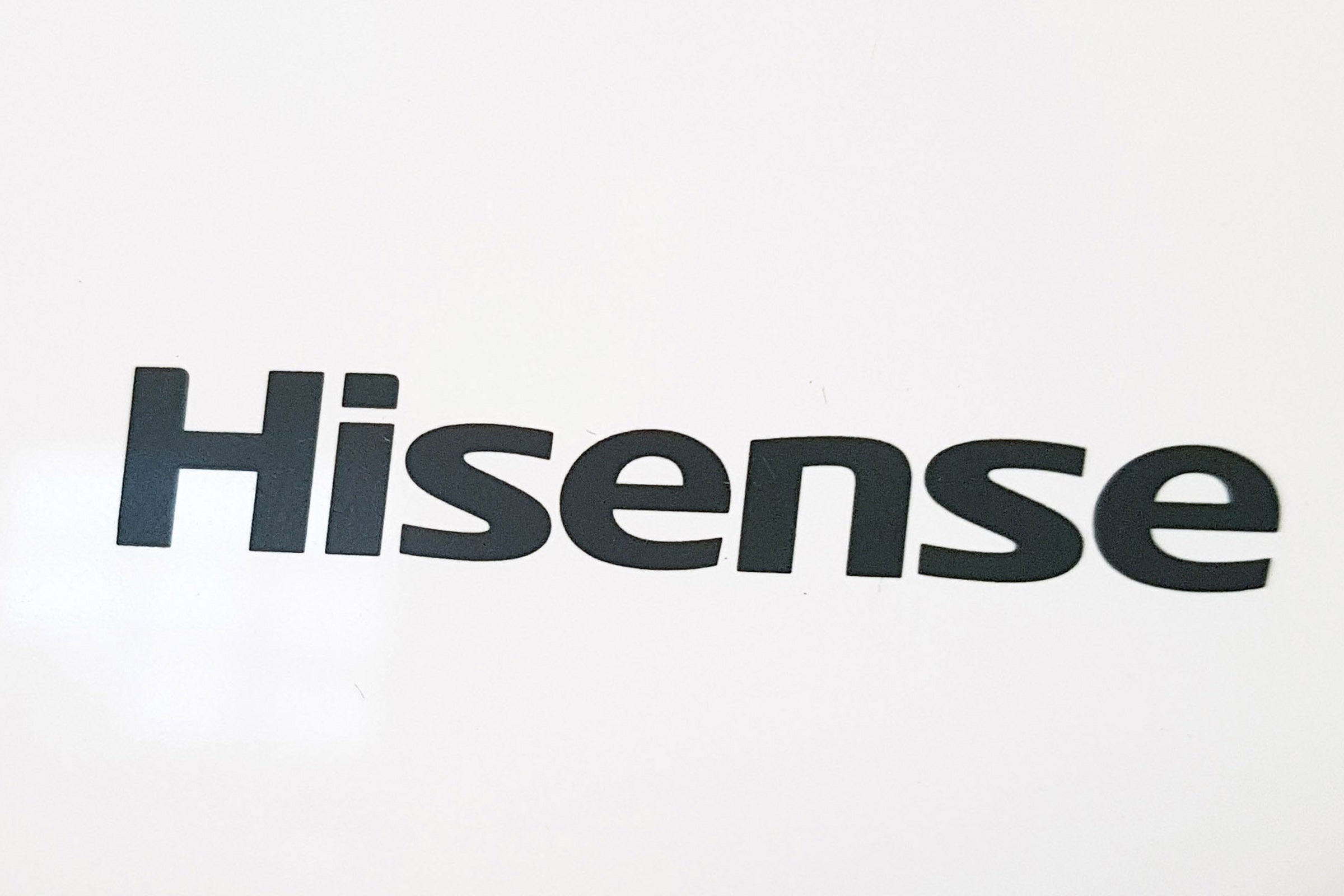 No surprise then that combining wash and dry is both lengthy and heavy on resources. A 5kg dry load of cottons, washed on Cotton 40 and dried to Cupboard Dry took over five and quarter hours and used 5.25kWh. For no easily explainable reason, even the water use increased on this wash-to-dry option to over 115 litres. That makes no sense to us at all, but Hisense’s own specs also state that adding a dry option increases water consumption dramatically. Go figure.

As a stand-alone washer, the Hisense isn’t too expensive to run and probably lives up to its A-rated billing. If you did 200 full loads and 40 half-load Cotton 40 washes per year, it would use around 230kWh and a significant 17,000 litres of water. At 15p/kWh and £3.50 per cubic metre water and waste, that would be a running cost of £99 – just scraping in under the £100 mark. That’s just about A-rated. 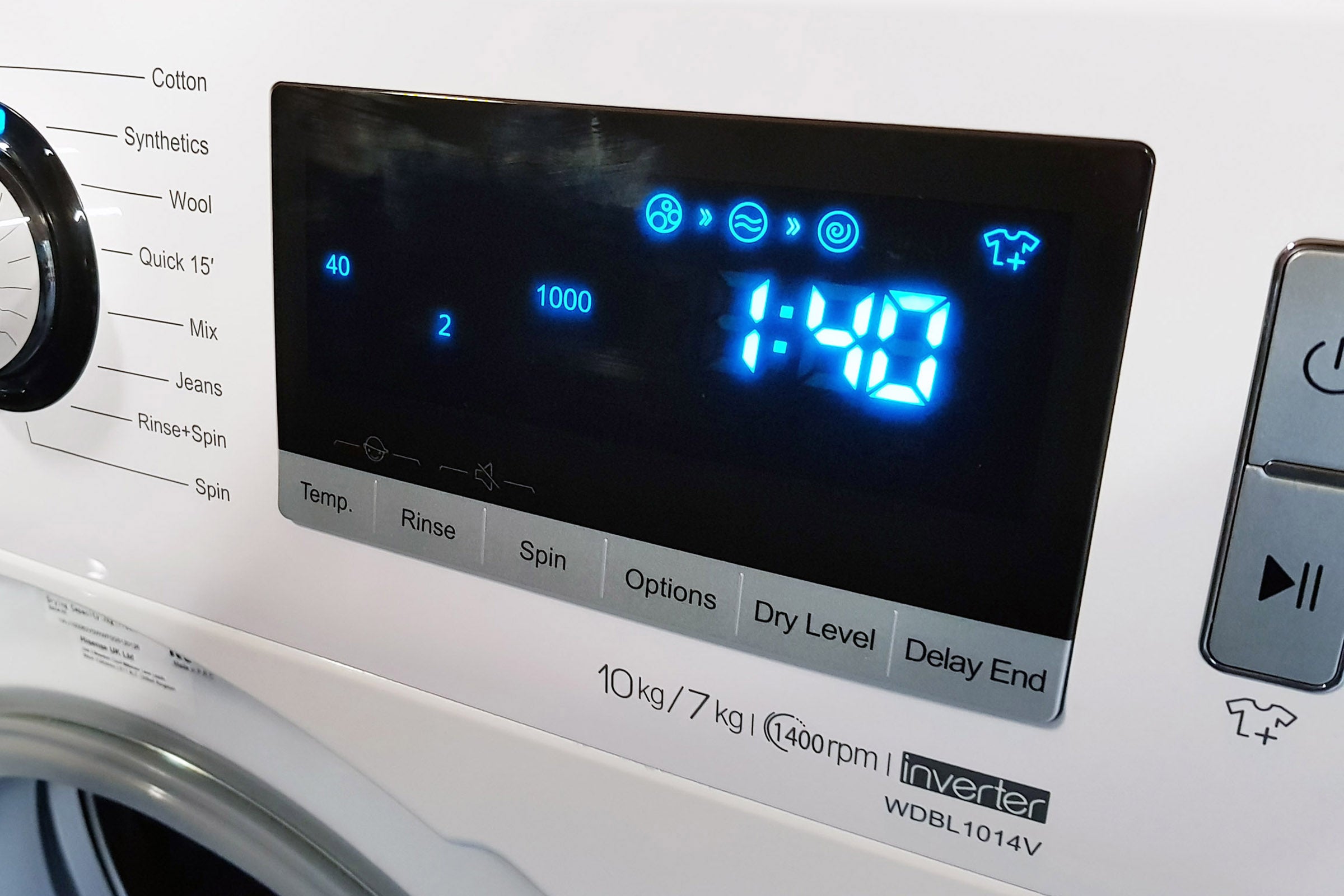 The real sting comes if you start using the dryer, since both electricity and water consumption skyrocket. If you added Cupboard Dry option to every one of those 240 loads then electricity would get into megawatts (1.21MWh) and water would go to over 30 cubic litres. At the same billing rate that would be £181 in electricity and £105 in water, nudging your annual running costs to nigh-on £300. Ouch. 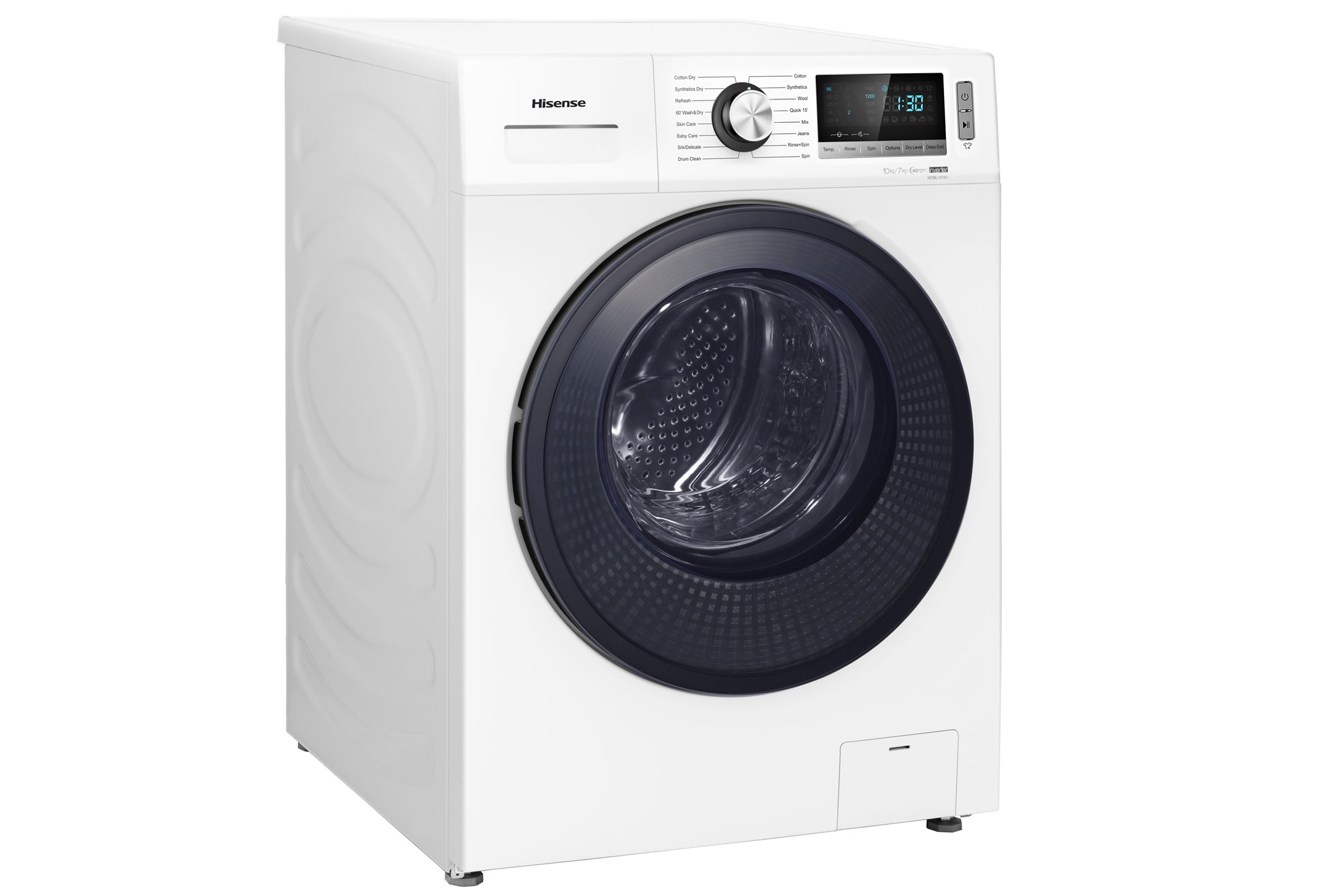 Of course, one would hope that most of the time you were able to hang out your washing to dry rather than use the tumble dryer. Looking at it that way, the Hisense is a solid-performing, fairly efficient washing machine with an effective but expensive drying option – if and when you really need it. For an asking price of below £500, that doesn’t seem like a bad proposition. We still have no idea why water consumption goes up when drying, though.

Why buy the Hisense WDBL1014V?

With strong cleaning results, great drying power and a range of different programmes, the Hisense is a flexible washer dryer for those tight on space. Running costs for washing alone are higher than many stand-alone machines at this price, and using the tumble dryer option sees electricity and even water consumption soar.

Thankfully, if you do need to use the dryer then drying results are top-notch, even on a full 7kg load. The Hisense isn’t without its niggles, including a slightly small drum, messy display and recalcitrant drain flap. Yet, you can’t argue that it does what it sets out to do fairly well, and does so at a reasonable asking price. Just don’t tumble dry every load.