There are three things you need to know about the Hisense H70NU9700.

Firstly, it’s massive. This is Hisense’s flagship TV of 2017, and it is only available at a whopping 70 inches. Get a friend to help unbox it, because I definitely sprained something doing it by myself.

Secondly, it’s an LCD TV with a direct LED backlight. That’s an increasingly rare treat these days, as most LCD TVs seem to be going for edge lighting. You can expect above-average contrast and lighting uniformity.

Finally, this TV has been certified as UHD Premium. That means it meets the bar set by the UHD Alliance, a confederation of tech companies and studios whose members include Dolby, Netflix and Warner Bros.

Hisense is fairly new to UHD Premium. The company has been targeting the affordable midrange for a while now, but now it’s toting the sort of specs that will make the more established TV brands sit up and take notice.

All of this is yours for £3000. The Hisense NU9700 has a few flaws that stop it competing with the very best – and most expensive – but it offers stonkingly good value for money. 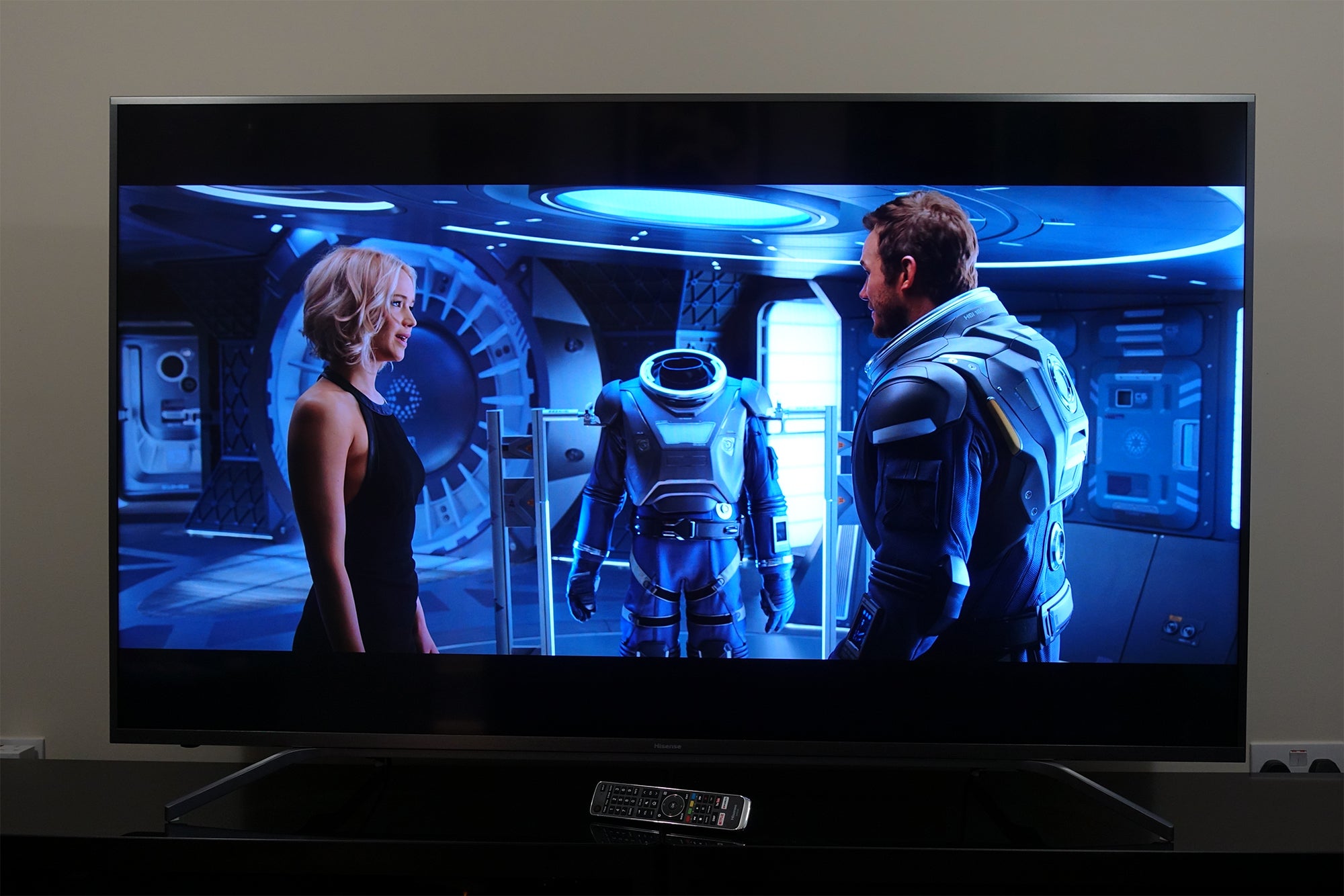 The Hisense certainly looks like a premium TV. There’s metal where it counts, on the frame and stand. The bezel isn’t as narrow as on some rivals, but it’s certainly not chunky enough to distract.

The only potential problem is the choice of stand, which has the feet far apart and near the corners of the TV. That keeps thing stable, which is important for a TV this size, but it does increase the footprint. You’ll need a bench or AV rack at least 130cm wide and 34cm deep.

The only thing obviously non-premium about the Hisense NU9700 is its remote control. Its button clicks are irritatingly noisy and I’m not sure how long that chrome paint will last before it flakes off. Still, it’s nicely laid out and easy to navigate. 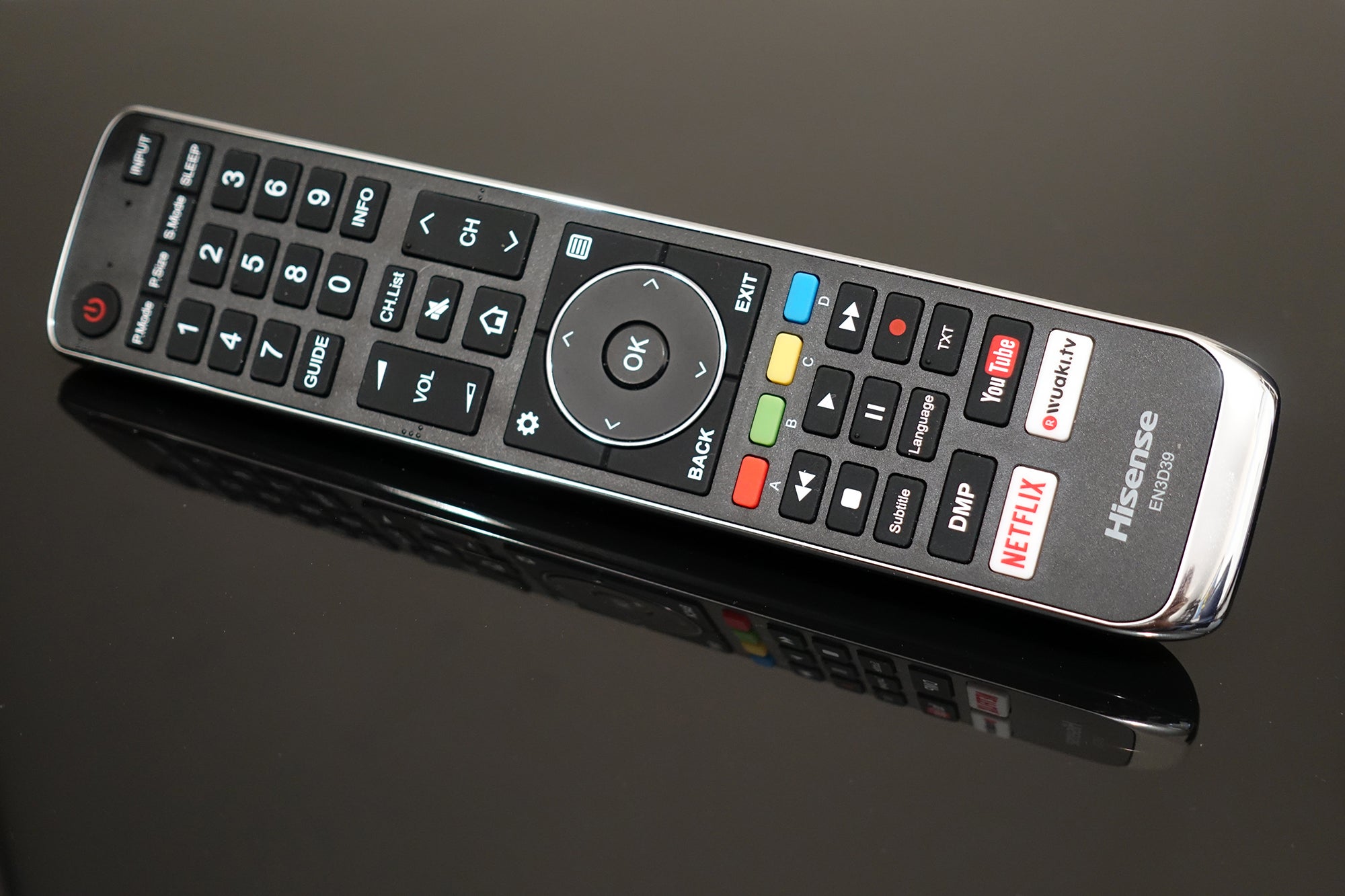 The specs are far more exciting. You get a 70-inch screen with a 10-bit panel and 4K Ultra HD resolution (3840 x 2160 pixels). The NU9700 also boasts a peak brightness of 1000 nits, and it uses direct-lit backlighting with 128 dimming zones. The TV uses small crystals to help improve lighting precision – it’s a proprietary tech Hisense calls ‘ULED’.

It’s also compatible with HDR (High Dynamic Range). At the time of writing, that’s just HDR10, the garden-variety format commonly used by 4K Blu-rays and streaming services. The NU9700 isn’t compatible with the metadata-filled Dolby Vision, but before December 2017 it will receive an update to add HLG (Hybrid Log-Gamma). That’s the broadcast-friendly format for HDR, which will come in handy in the future.

As for connections, there are four HDMI ports, two of which are HDMI 2.0 and support 4K at 60Hz. You also get three USB ports, along with digital optical out. Curiously, you’ll also find composite, component and SCART inputs, which is good if you have legacy kit lying around. Four-player N64 GoldenEye, anyone?

On the software front, the TV runs VIDAA U, a proprietary operating system. Like all the best TV interfaces, this one uses a pop-up launcher bar with large, colourful tiles. As with LG’s brilliant WebOS, this appears on top of whatever you’re watching. It doesn’t kick you out and drag you to a separate hub screen, which is what Android TV insists on doing.

App support is good. You get 4K and HDR versions of Netflix, Amazon Video. There’s also YouTube, as well as the full suite of UK catch-up services: BBC iPlayer, ITV Hub, All 4 and Demand 5.

The latest update adds Freeview Play, which integrates those catch-up services with a programme guide. That lets you scroll back up to seven days to see what you’ve missed, and open the corresponding app. 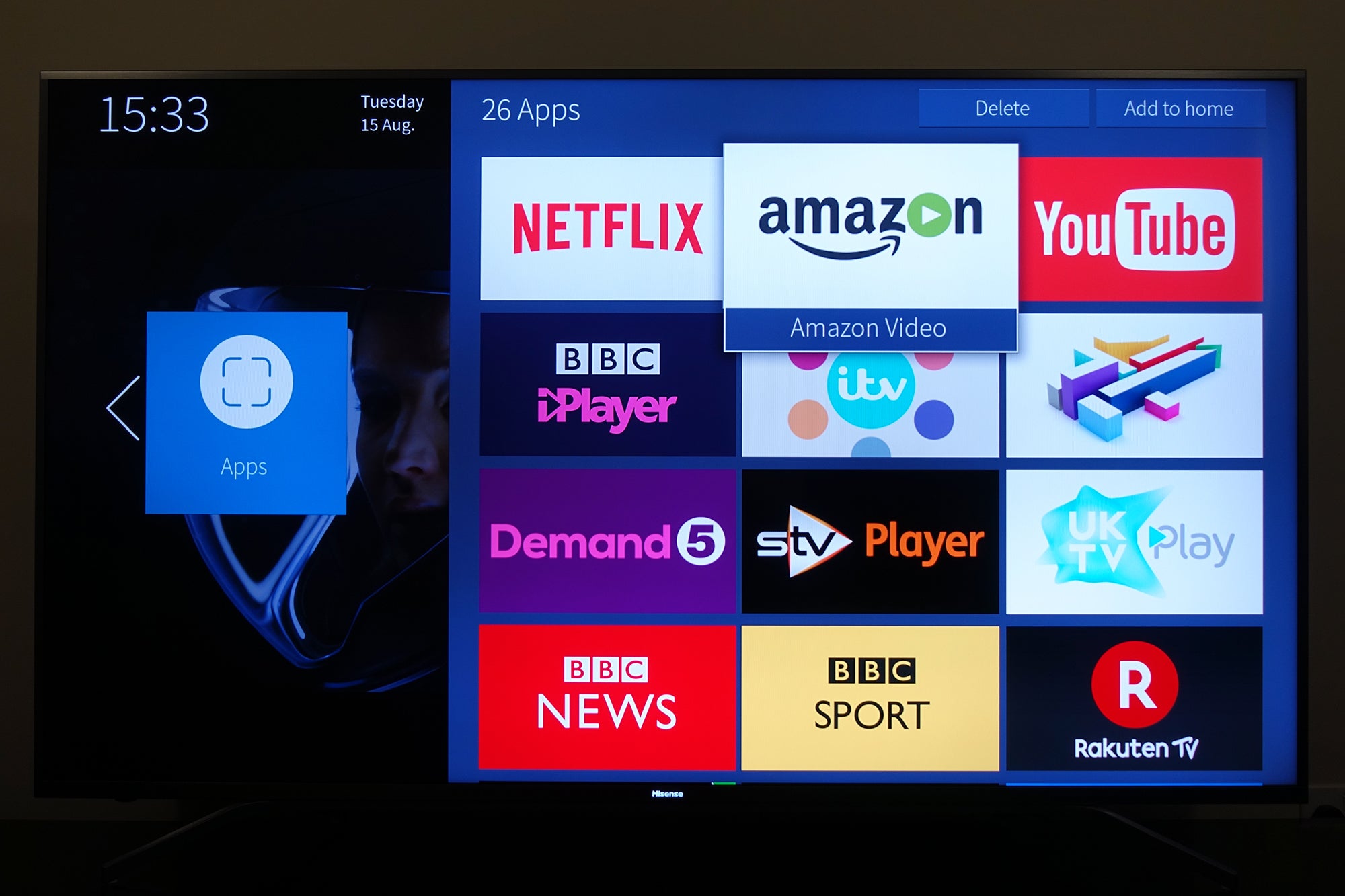 So it looks like a premium TV, but does it perform like one? Oh yes – but temper your expectations. Just because this is a UHD Premium TV doesn’t mean it can go up against reigning champs. Nor should it, considering its price.

It’s capable of reaching 1000 nits of brightness, for starters. That separates the best LCD TVs these days from the basic. While that peak luminance isn’t necessary to deliver a sense of improved dynamism, it does mean you get stronger specular highlights. Street lamps, or ambient light reflecting off glass, have a greater impact. That peak luminance also means the ability to render finer differences in brightness.

The Hisense NU9700 also offers impressive black levels for an LCD TV. It’s never properly black – that’s reserved for OLED TVs – but it’s deep enough to look black and never grey, which is what you occasionally get on a budget HDR TV like the Sony XE70. There is also enough shadow detail that you can see exactly what is going on in the many nighttime fight scenes in Daredevil.

Combine the impressive light and dark performances and the overall effect is excellent contrast. I’m not sure how much of it is down to the ULED technology, but it certainly helps to have backlighting and local dimming. The lighting uniformity here is impressive – I noticed no ‘dirty screen effect’, or ugly light patches that distract from the image. 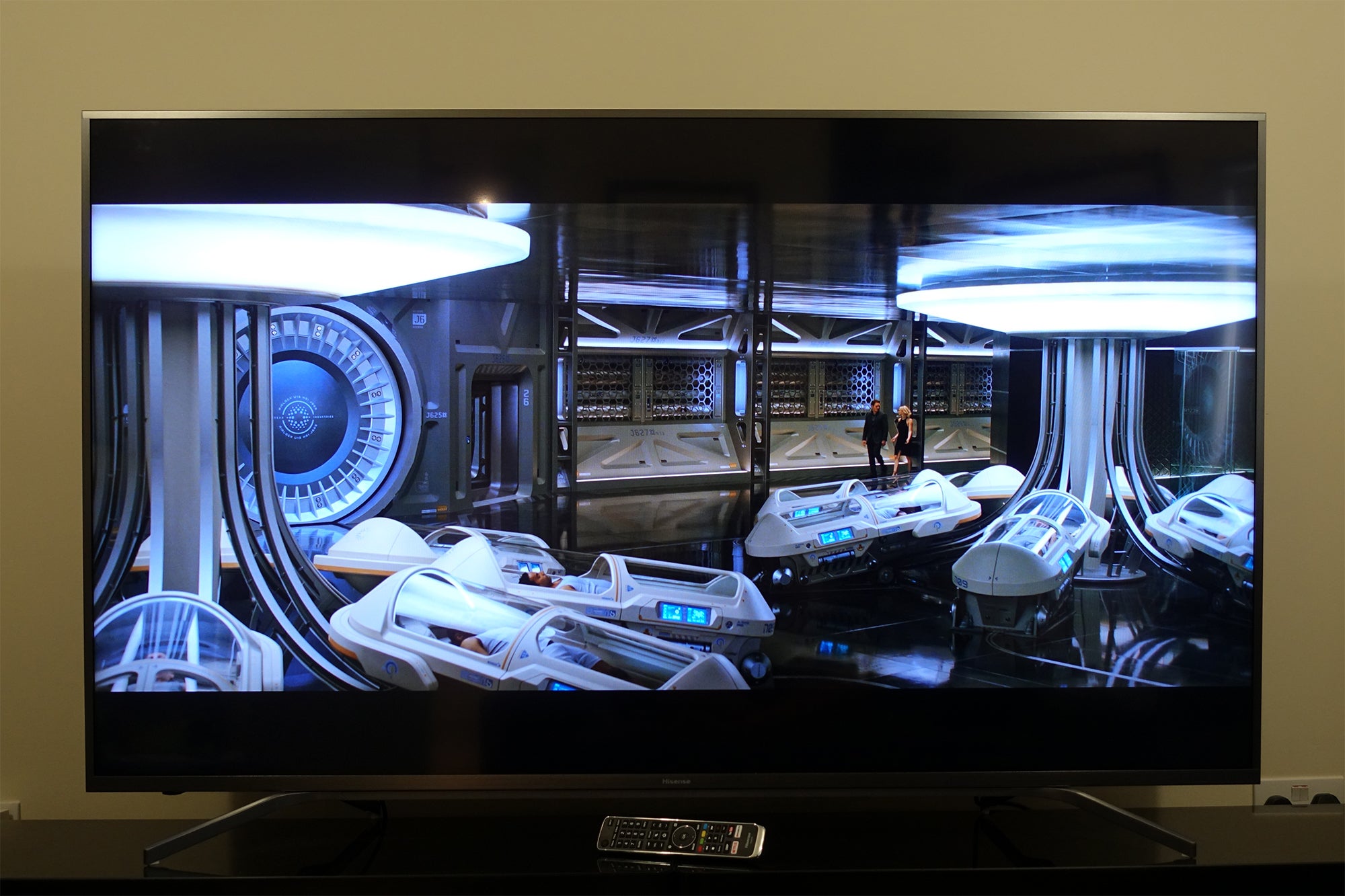 It’s also a remarkably crisp picture in 4K. Whether you spin a UHD Blu-ray or stream it from Netflix and Amazon Video the picture is sharp without the overly processed look that troubled the Hisense N6800. You’ll have no problem picking out the extra texture, especially at this screen size, if you’re upgrading from a small HD TV.

Of course, the majority of video footage out there is still in 1080p, and fortunately that looks good too. It’s clearly a drop in definition from 4K, but the picture is generally free of noise.

It’s a vibrant picture, too. There’s no lack of pop to the colours, although it’s not the most realistic picture. Skin tones aren’t especially convincing, especially when it comes to blending the more subtle areas of red. I noticed a bit of banding in HDR playback, but it’s not hugely distracting.

Anyone hoping for a massive gaming screen should be happy, as the gaming mode has an input lag of up to 37ms. That’s not the sort of figure you want for properly competitive gaming, but it’s decent for casual use and I managed some consistent head shots on Star Wars Battlefront.

Finally, the sound is decent. As this is a backlit TV, there’s more space for speakers than on edge-lit rivals. For big movie soundtracks you might want a good soundbar or some proper speakers, but I happily sat through a couple of Game of Thrones episodes. 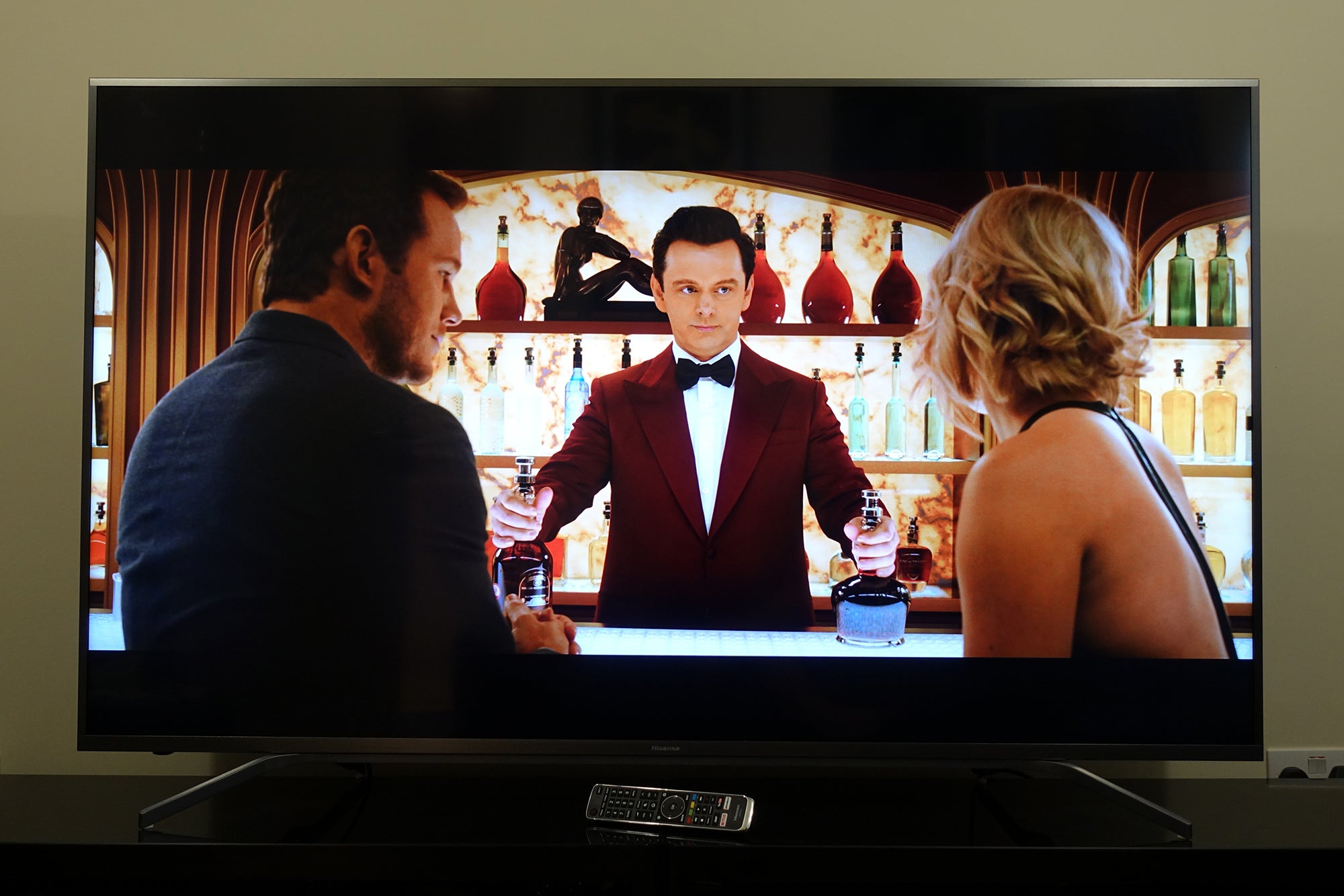 I’ll end this with a few set-up tips, to help you get the most out of this picture. Viewing angles are a bit limited, and the picture begins to wash out if you stray too far from centre. This normally isn’t a huge deal with smaller TVs, but this is a 70-inch beast and sitting too close will mean watching the sides of the TV at too great an angle. I’d advise sitting at least 3m from the screen.

Turn Adaptive Contrast off. It’s crude and doesn’t add much, and people walking in the background of a scene can make the dimming system flicker erratically. Local Dimming can stay on, but keep it on Low.

Noise reduction should be kept off unless you’re watching some particularly grainy content in 4K, such as Daredevil. Even then, only have it on Low to avoid smoothing out detail levels too much.

As for motion processing, the Ultra Smooth Motion is set to ‘Smooth’ by default, and that’s an uncomfortable watch. I’d suggest having it on ‘Film’ or low on ‘Custom’. 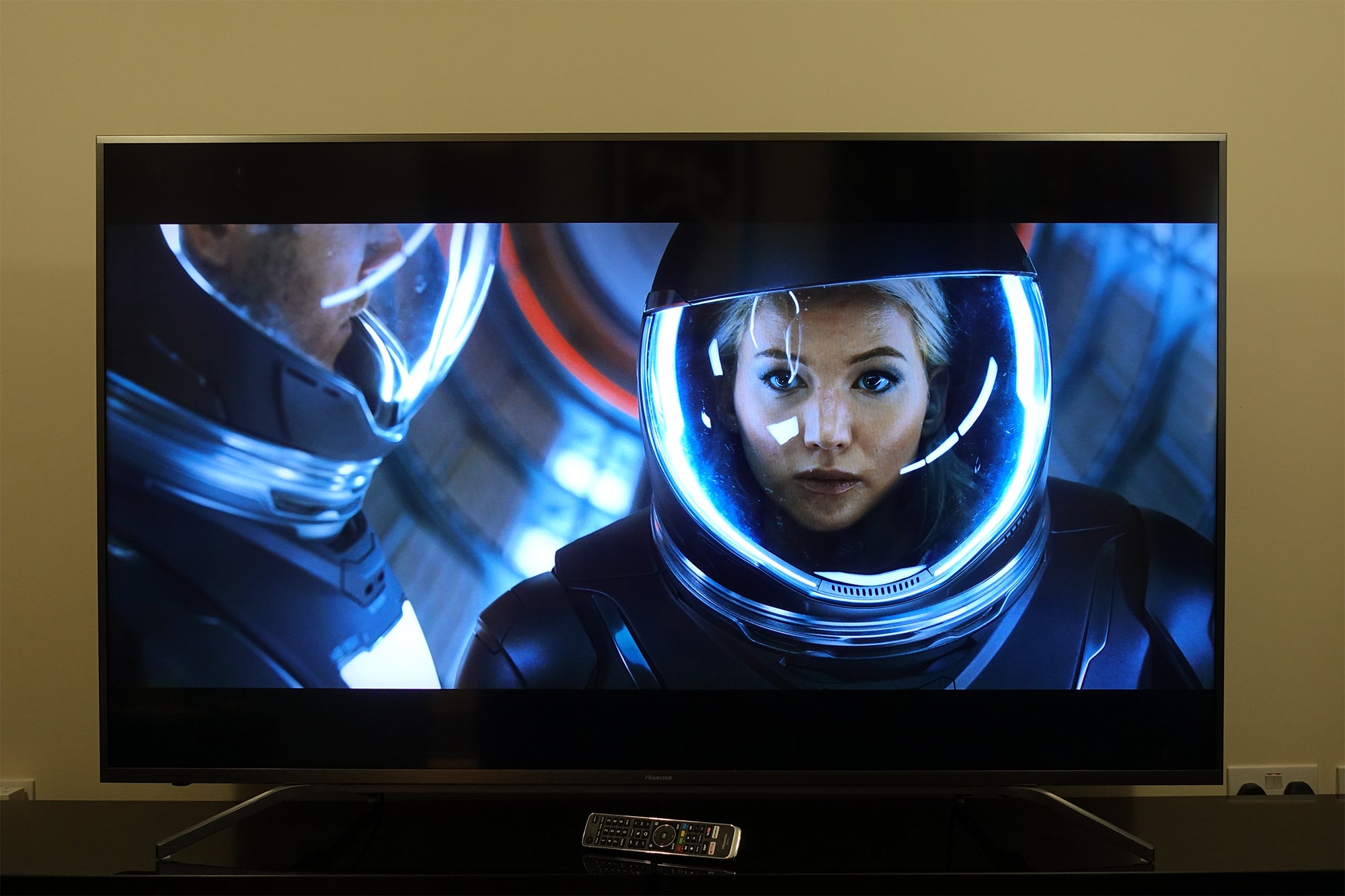 This isn’t the best TV out this year. Far from it. The Panasonic EZ952 wins hands down when it comes to colour accuracy, the LG OLED TVs are more subtle with vibrancy, the Sony A1 OLED is a lot better at fine detail and motion, and the Samsung QLED Q9F is brighter.

But those are all smaller and more expensive. If you’re not a hugely fussy AV enthusiast, and you’re looking for a big TV that does 4K and HDR, then you’ve hit the jackpot. The Hisense H70NU9700 offers tremendous value for money and it does a lot more than give you a taste of what the next generation of TVs is all about.