Usually, it’s at this point that the flaws in a budget TV become apparent. However, this hasn’t been the case with this Hisense.

In my opinion, contrast is the most important part of any TV picture, yet it’s also the area that cheap LCD TVs tend to struggle with most. The LTDN50K321UWT, however, performed admirably.

The set displayed far less low-contrast greyness over black/dark areas of the picture than we’d expect at this price level. Thus, blacks really do look convincing – especially with the backlight setting reduced to the level described earlier. This provides a great foundation on which to build the rest of the image. 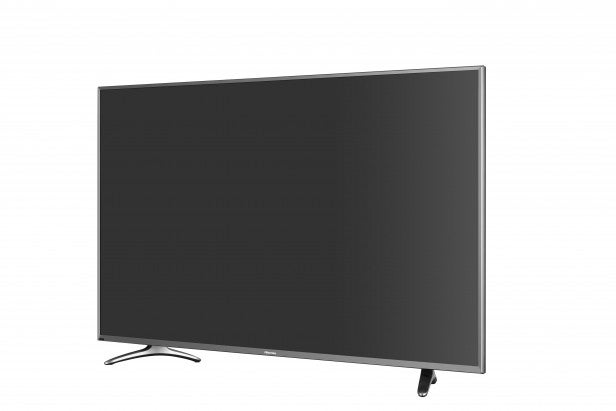 Making the LTDN50K321UWT’s black level performance even more impressive is the fact that deep black levels are delivered with excellent uniformity. There’s very little backlight clouding, where areas of dark scenes can look unnaturally brighter than others. I noticed only a couple of very low-level backlight clouds to the left side of the screen during almost completely black images – they’re barely visible during normal viewing.

Also strong is the dynamic contrast system. This can cause a few jumps in brightness from time to time, but such occurrences are rare.

In fact, there’s precious little distraction from any obvious “workings” of the backlight engine. This not only makes the Hisense LTDN50K321UWT stand out against other affordable models, but also some more expensive LCD sets – especially those from LG, for example.

Next, while I did feel I needed to reduce the backlight setting considerably for serious “lights-down” movie viewing, the image continues to look reasonably punchy and bright in non-dark areas.

There is one price to pay for the LTDN50K321UWT’s mostly strong black level performance: some crushing out of shadow details.

This is a shame, obviously, and it could provide some with a reason to spend more on a different 4K UHD model. In my opinion, however, this isn’t a deal-breaker – especially since the issue isn’t exaggerated by the “radioactive glow” effect often exhibited by many budget LCD TVs displaying dark scenes. 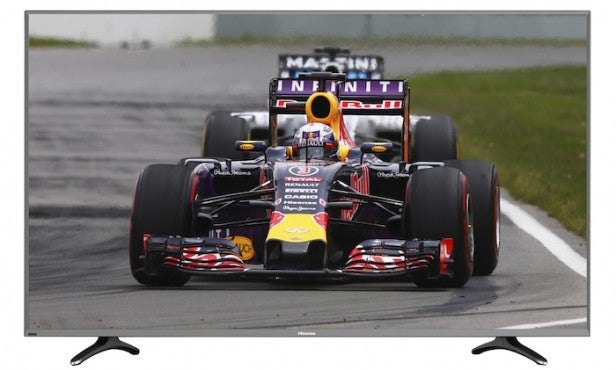 One other issue concerning the LTDN50K321UWT’s black-level performance is that it takes a significant hit if watching from an angle as little as 20 degrees vertically or horizontally. Something to bear in mind if your room has one or two awkward seating positions.

A good black-level response usually aids in a convincing colour performance too, and so it proves here. This is especially apparent in how well the LTDN50K321UWT holds on to its rich, natural tones during dark scenes.

The colour palette also looks more dynamic and video-tuned than is common at the LTDN50K321UWT’s price level – although, inevitably, it’s no match for the huge punch of those TV sets that use systems such as Triluminos and Nano Crystals. There’s no trace of the sort of banding and blocking problems you can get with TVs that employ poor image processing, however.

Skin tones can occasionally look a little low on detail, but seldom enough to be a distraction. Rich reds look a little pallid versus rich greens and blues too, but this slight shortfall won’t affect the vast majority of your viewing. It only makes its presence felt in heavily saturated content.

Other issues with the TV’s colours are that very bright whites can “clip” a little, resulting in loss of some detail, and that its limited range of tones relative to the more high-end 4K TVs on the market means that native 4K footage doesn’t look quite as subtle and detailed. However, this is only to be expected – and it doesn’t stop the LTDN50K321UWT actually performing better than some more expensive TVs with its sharpness.

It has the resolution, clarity and processing prowess to ensure that 4K footage really looks like 4K, despite its 50-inch screen not being huge by 4K TV standards. It’s seriously one of the best sub 55-inch TVs we’ve seen at bringing out the clear difference between HD and UHD.

The sharpness doesn’t look forced either; the picture always looks natural and clean with no exaggerated edging or excessive noise. This is true so long as you keep a lid on the TV’s processing engines. Occasionally, some extremely textured areas – such as the grass on a football pitch – can look a little noisy and unstable, but such moments are rare.

It helps the sharpness that the LTDN50K321UWT suffers with less motion blurring and judder than would have been expected of such a low-cost 4K UHD TV. Sure, there’s minor lag over skin tones when you’re watching anything less than native 4K, and a slight “billowy” look to large areas of motion when watching 24p sources.

I noted, too, that on occasion motion processing glitches over very dark areas of an image, almost as if it can’t quite figure out what to do when it has so little picture information to work with. And, as already pointed out, motion processing can cause noise to become exaggerated. However, the quality of the core panel means that for most types of content, motion processing won’t need to be active.

Despite the presence of the Amazon and Netflix 4K apps on the LTDN50K321UWT, you’ll still find yourself watching plenty of HD content for now. So it’s good to find that, again, it outperforms its price point with its HD upscaling. It doesn’t go as far as some rivals when it comes to making sub-4K sources look 4K, yet HD content does look slightly higher in resolution than it would on a merely HD screen.

More importantly, upscaled pictures don’t look unnatural or noisy. As far as I’m concerned, this is of far more importance than trying to elevate HD sources to a level that really resembles the detail and sharpness of native 4K sources.

Even standard-definition digital broadcasts look pretty watchable when upscaled on the LTDN50K321UWT. There’s a slightly gritty, exaggerated look to the sort of mosquito and MPEG blocking noise that can affect most such sources, but you can limit the aggressiveness of this by reducing the set’s contrast and activating the noise-reduction systems.

Used as the main TV for the review period
Tested for more than a week
Tested using industry calibrated tools, discs and with real world use
Tested with broadcast content (HD/SD), video streams and demo discs
Previous
Hisense LTDN50K321UWT Review Next
Sound and Conclusions Review