What is the Hisense LTDN50K321UWT?

Despite its impossible-to-remember model name, the LTDN50K321UWT from Chinese brand Hisense is actually a TV we’re not going to forget in a hurry.

Its combination of a 50-inch native 4K UHD screen with a price of only £499 is eye-catching in itself. But when you factor the LTDN50K321UWT’s genuine performance quality as well, I suspect it could mark the beginning of a number of sleepless nights for the more established TV brands.

When being handled, build quality does feel a little plasticky. Overall, however, the LTDN50K321UWT’s design does precious little to give away how ridiculously cheap it is. The slim, grey frame is bang on trend, and is actually even more slender that the surrounds on many big-name rival TVs. 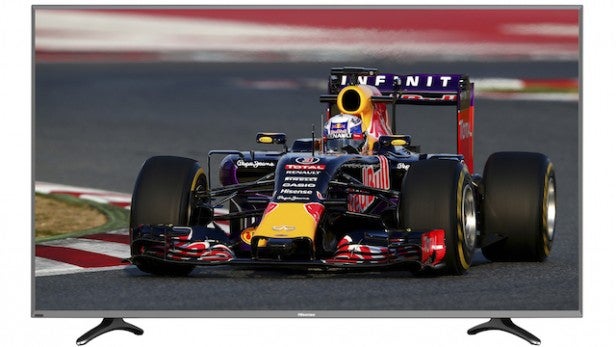 A glossy finish on the bottom edge lends a touch of class, and while there’s nothing particularly stylish about the desktop feet, they’re certainly not ugly – and best of all, they’re super-easy to attach.

Placement of the legs at each end of the TV does mean that users will require a reasonably wide piece of furniture on which to rest the set. While this might present a challenge with a 65-inch TV, most furniture should cope with this 50-inch model.

The LTDN50K321UWT’s connections also betray little, if any, sign of the TV’s affordability.

The inclusion of four HDMIs is generous at this price, especially since they support the UHD HDCP 2.2 anti-piracy protocol. Only two will play 4K UHD at 50/60 frames a second; predictably, none are enabled for high dynamic range playback.

But in fact, finding any 4K/50p support on the LTDN50K321UWT is something of a relief. It would have been all too easy for Hisense to have opted for more dated HDMIs in order to keep down costs.

For multimedia playback there are three USBs and support for DLNA multimedia streaming over your network. This network support includes built-in Wi-Fi – certainly something I wouldn’t expect as a given on a TV as cheap as this one.

The Wi-Fi proves unusually receptive, too. The connection gauge displayed a full four bars with my router – even from locations where many rival TVs show only two bars or fail to connect at all.

The network connectivity can be used to explore Hisense’s stash of online content and apps. I’m pleased to say that these apps include the 4K-capable version of Netflix, for those who have a broadband connection fast enough – at least 15Mbps – to receive the UHD streams. 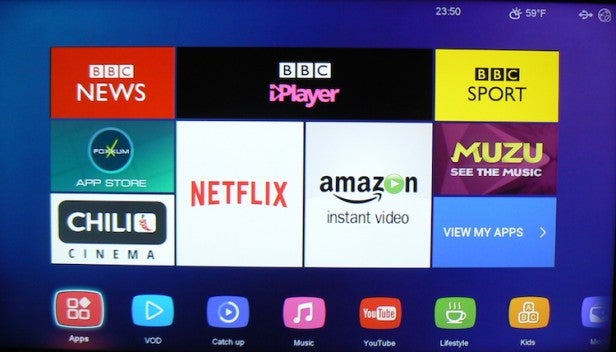 Hisense’s app collection also includes the BBC iPlayer – showing that the company clearly has a team in place to work on UK localisation – and there’s a graphical “placeholder” for Amazon. The Amazon app is expected to launch before Christmas, and again it will support the service’s 4K streams.

In these days of LG’s webOS and Panasonic’s Firefox OS smart TV interfaces, Hisense’s smart OS looks a little basic. In addition, it takes over the entire screen real-estate, so you can’t keep watching TV while you use it. Its “recommendations” feel somewhat random, and you can’t customise which apps appear on the homepage.

Note that although there are plenty of foreign language apps on show, there’s no sign of the ITV Player, All 4 or Demand 5 – so there’s still room for improvement here.

But again, it’s an idea to remember the £499 price; arguably, finding any smart TV features at all is a bonus on a 4K UHD TV this cheap, never mind the 4K versions of Amazon and Netflix.

The LTDN50K321UWT doesn’t boast a particularly whizz-bang processing brain, so navigating the smart menus and features can be a touch slow. Scrolling up and down the EPG listings can be particularly frustrating. However, the system seems stable, and the sluggishness shouldn’t be severe enough to put off most people from exploring what the LTDN50K321UWT has to offer.

Not surprisingly, the LTDN50K321UWT doesn’t ship with the type of smart remote control found accompanying some of this year’s more expensive TVs. However, Hisense’s more standard model does have a Netflix button, which is a nice touch. 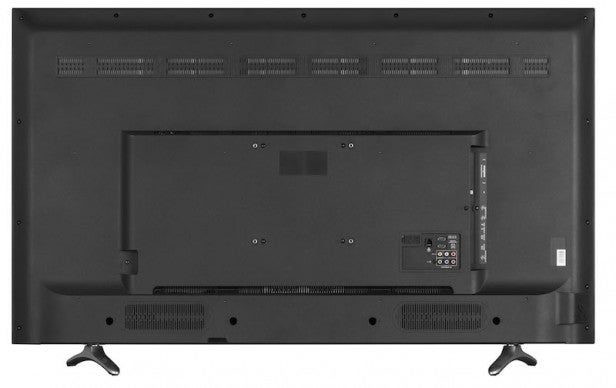 One feature the LTDN50K321UWT doesn’t support is 3D playback. But I can’t see this being of much concern when folk consider how much they are getting for their money.

On the whole, the LTDN50K321UWT is pretty easy to install. It also includes a decent array of picture calibration controls for such an affordable set, including the ability to fine-tune white balance.

The set’s Standard or Natural presets are both decent enough – they don’t require much tweaking for normal daytime viewing. For those lights-down movie sessions, however, you’ll need to put in a bit of work.

I’d recommend turning off all noise-reduction and motion-processing systems, since these tend to leave film grain looking unnatural. Also, set the dynamic contrast mode to its highest level and turn down the backlight to around its 27-30 level. This will reduce the appearance of greyness and minimise the faint traces of clouding that appear with the backlight on its default settings.