Despite its budget price the Hisense I6433C is easy to use and delivers flexible, super-fast cooking options.

With nine power levels and a Boost mode that produces super-fast heating results, this simple yet stylish induction hob is a top contender. The Hisense I6433C looks great and has a Bridge Zone linking two burners together, simplifying cooking for larger pots and pans.

Offering responsive controls, easy button navigation, and a mode for perfectly melting cheese or chocolate, the Hisense offers plenty of features for the money. The burners on the Bridge Zone could be slightly closer together for more even heating of skillets, but that isn’t a major issue considering the attractive price tag of £260. Overall, this neat Hisense hob is a great buy. 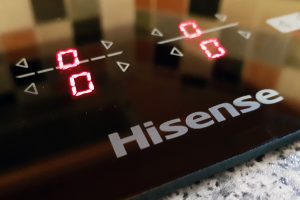 With its shiny black glass and rather bold grey zone markings, the Hisense looks stylish and inviting. The four burners comprise two mid-sized options on the left that can be linked to create the Bridge Zone, plus smaller and larger burners to the right. This caters for a wide range of pan sizes.

The Hisense doesn’t have the standard slider controller that we see on a lot of induction hobs, but the individual buttons for each zone were so responsive that this wasn’t an issue. Each cooking zone has a separate display and left/right arrows to change power level. Surprisingly, once turned on each burner automatically enters into Boost mode.

This is the first induction hob we’ve tested that doesn’t simply start at the lowest power, with you having to manually raise the level. Of course, if you’re looking for light heat then you can simply turn the power level down with a few presses of the responsive heat button. 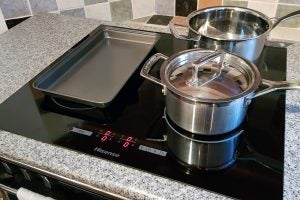 Included with the Hisense is a trusty bridged cooking zone that allows you to connect two medium-sized burners to combine the cooking field. This is great for your larger skillets and will ensure your meals are cooked evenly across larger pans. To enter the Bridge Zone simply touch the two sensors and hold them down for three seconds. In this mode there’s no boost power setting, but the two mid-sized burners together offer plenty of cooking power. 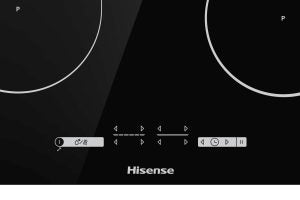 Although sporting an impressively low price tag, the Hisense wasn’t short of features. Included is a Stop and Go function that allows you to pause or suspend the cooking process and will keep all of your settings for up to ten minutes. Helpful stuff. There’s also a Slow Melt function that aims to maintain a constant temperature of 42ºC, making it easier to master melting difficult ingredients without burning them. 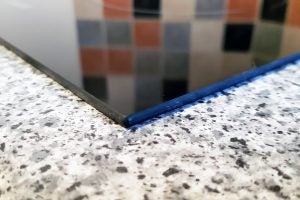 A timer function can be used across all four zones, and the Hisense comes complete with a child-lock button to keep inquisitive fingers from turning on the controls.

The Hisense had a super-speedy control system that proved flawless during testing, reaching different power levels hassle-free. The buttons are all nicely responsive and you can increase or decrease level with a single button press – or press and hold to nip up or down through the levels. Considering the price tag, we were very impressed that there were no operational niggles with the touch controls. 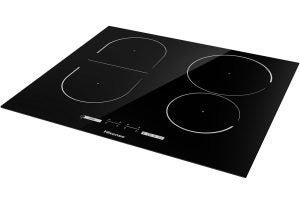 All at a good size, the four cooking zones are well spaced. Thanks to the bold grey markings on the black glass, it’s easy to place your chosen pan correctly. The bridge function on the left-hand side was super-easy to engage, producing impressive cooking results with our large skillet. Our only caveat to this is that the two burners are quite a long way apart, leaving a bit of a cool spot in-between. 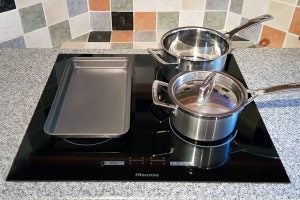 Highlighted by Hisense as the Automatic Rapid Heating function, all cooking zones are set to the maximum power level at the start of the cooking process. We thought this was a great idea as, most of the time, you probably want to start heating a pan quickly anyway. If you do want a gentle heat then you can quickly bring the power level down before the pan becomes too hot. We thought this was a great touch, and it proved really easy to bring the power level down if you’re looking to braise, fry or sauté your food. 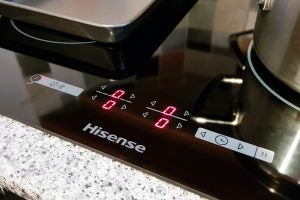 The Stop and Go function simply stops all the burners to slow-up cooking, recalling the last setting on all zones when you press Go again afterwards. That might be useful if you need to power down to mop up a boil-over spill.

Throughout use, we did note that the Hisense was fairly noisy, especially when the fans began to kick in. Overall, though, this hob is a pleasure to use with its swift controls and easy to access functions. 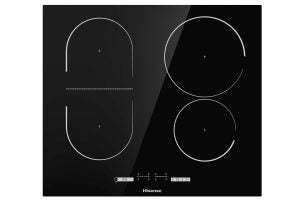 Using thermal imaging we could see that the Hisense’s four zones are nicely apportioned with small, medium and large traditional round induction burners. On Boost mode, the Hisense produced fast heating results. Our smallest 17cm pan with 1 litre of water was raised to 90ºC in very swift 3mins 50secs while drawing in 1.9kW. This was using the smallest burner on the front right zone – and was a grand result. 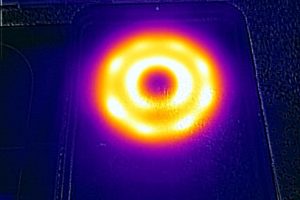 For the mid-sized 19cm pan on the back-left burner, the hob delivered 2.2kW of power, raising 1.5 litres of water to 90 degrees in an impressive 5mins 10secs.

The real surprise was the result produced from the top right burner, heating our largest 21cm pan with 2 litres of water to 90ºC in a show-stopping 4mins 45secs. This was putting 3kW of power into our pan, making it one of the fastest heat-up results we’ve ever seen, irrespective of price.

Confirmed with thermal imaging, the medium-sized burners on the Bridge Zone were rather far apart. This does mean you need a very large pan to make the most of both burners, and creates something of a cooler spot right in the middle. That won’t be too much of an issue with heavyweight and cast-iron pans, since these diffuse the heat well over the base of the pan. Shallower trays and pans will suffer a little from the cool spot in the middle of the bridged zone. 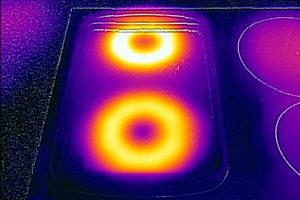 However, this isn’t a big deal when you take the Hisense’s price tag into consideration; overall power and performance is exceedingly impressive.

Delivering excellent heating results on Boost mode, amazingly responsive controls and equipped with some handy functions, the Hisense is a real superstar – and have you seen that price tag? It’s also one of the most affordable fully featured induction hobs available, even when compared to one of the models in our Best induction hob guide.

The looks ooze stylish appeal, as long as you don’t mind the heavy grey zone markings, and this hob offers great flexibility for different-sized pots and pans.

We can only really criticise the slightly widely spaced Bridge Zone and the fact that the Hisense I6433C is a bit noisy in use. However, given its stellar performance and super-responsive controls, it offers outstanding value for money.

Despite its budget price, the Hisense I6433C is easy to use and delivers flexible, super-fast cooking options.