The 65AE7400 65-inch TV may not be one of those lower mid-range ‘classics’ that puts the fear of god into today’s high-end models, but it’s dcent enough and well-featured enough to represent good value for money.

Hisense may be showing increasing signs of wanting a slice of the premium TV market, but its bread-and-butter business in the UK, at least, is aggressively priced budget and lower mid-range TVs.

The 65AE7400 perfectly exemplifies this by combining a surprisingly decent feature set with a respectable performance for a 65-inch TV that costs the right side of £650.

At the time of writing, the best price we can find for the 65AE7400 in the UK is a very reasonable £649. This precise model doesn’t appear to be available elsewhere.

The 65AE7400 looks more like a mid-range TV than a budget one. Its glossy finish looks luxurious rather than plasticky or vulgar, and the screen frame is impressively trim and robust. The silvery bar-style desktop stand is quite a statement, and as such could prove divisive.

Personally, I quite like it – and, actually, once you’re sat down opposite the screen, it joins the narrow frame in providing precious little hardware ‘baggage’ to distract you from what you’re watching.

The 65AE7400 uses a VA type of LCD panel that’s illuminated by direct LED lighting (where the LEDs sit directly behind the screen rather than around its edges). These promising discoveries are commonly associated with better contrast than their IPS panel and edge-lit lighting alternatives.

Relatively affordable LCD TVs typically don’t excel when it comes to brightness. So it’s no great surprise to find the 65AE7400 delivering a measured peak light output on a 10% white HDR screen of just 366 nits. This compares with the 2000 nits and more of high-end LCD TVs, and 850-1000 nits from the latest generation of higher brightness OLEDs.

This will inevitably have an impact on the TV’s performance with high dynamic range (HDR) sources, which need plenty of brightness to enjoy a full expression. It’s nice to see the 65AE7400 supporting Dolby Vision, which adds extra scene-by-scene image data to take the burden off screens when it comes to figuring out the best way to make any given HDR picture look.

The 65AE7400’s connections are reasonably numerous for its price, with four HDMIs in particular standing out. None of these HDMIs can support the latest gaming features of 4K at 120Hz or variable refresh rates, but the same is true of the HDMI ports currently found on every TV at the 65AE7400’s price level.

One of the HDMIs does, at least, support the ARC system for passing multi-channel sound out to soundbars and AVRs. There’s no support for the lossless eARC audio system, though. While gamers might rue the lack of 4K/120Hz and VRR support, the set certainly isn’t a total bust for gaming. Not least because switched into its Game mode, it takes just 10.4ms to display received image data on its screen. That’s in line with the best measurements of the most premium TVs.

The 65AE7400 manages a few picture processing features despite its affordability. An Ultra Smooth Motion system is designed, of course, to smooth away judder, while Adaptive Contrast adjusts the panel’s light output depending on how much brightness there is in the image you’re watching.

The 65AE7400’s smart features are provided by Hisense’s own VIDAA system. Going its own way here instead of just ‘buying in’ a system such as Android TV, Roku TV or webOS comes with its challenges. There’s support for one of the streaming world’s biggest hitters in Disney+ but Apple TV is not yet available. However, VIDAA’s presentation, organisation and general slickness are all very respectable.

Kicking things off with a few 4K Blu-rays, the 65AE7400 gives a better account of itself than expected for its price point.

For starters, its HDR credentials are bolstered by a tone-mapping performance credible enough to make HDR images look like they’re being fed by more than 366 nits of peak brightness. There’s far greater intensity to the brightest highlights of HDR images than you commonly see at the 65AE7400’s price level, giving you a handy sense of HDR’s expanded light range.

The set doesn’t feel particularly bright with more full-screen HDR content, it has to be said. Although there is still a clear sense with such HDR imagery of it looking clearly brighter than SDR. A sense that’s bolstered by the screen’s ability to deliver colours with surprising verve and richness.

It also helps the 65AE7400’s decent HDR impact that it’s slightly above par when it comes to handling dark scenes and black tones. I don’t want to overstate this point – there’s clearly more greyness to be seen in parts of the 65AE7400’s picture that should look black or near-black than there is on the vast majority of today’s much more expensive premium LCD and, especially, OLED TVs.

However, the greyness isn’t bad enough to dominate dark scenes to the point where they become the defining feature. You can still see enough detail in dark areas, and dark colour tones still look credible enough for you to get involved with dark scenes almost as much as you do with bright ones.

The Adaptive Contrast and Dynamic Backlight features play their part subtly enough, too, to not draw distracting attention to themselves. Although in an ideal world, I’d have liked them to offer slightly more potent options to at least experiment with.

More good news finds the 65AE7400 getting good value from its 4K resolution. Native 4K sources look as detailed and subtle as they do on 4K TVs costing many hundreds of pounds more. Not least because, very unusually for the relatively affordable end of the TV market, clarity doesn’t take a big hit when there’s motion in the image. This is regardless of whether it’s something moving across the screen, or the entire image moving during a camera pan.

Purists will be pleased to hear that you don’t even need to use the 65AE7400’s motion processing to enjoy motion that’s free of excessive judder or resolution loss/smearing. That said, the motion processing’s Clean and Film modes if you do try them out do take a little of the edge off judder, without causing the sort of nasty digital side effects you might have expected for the 65AE7400’s money.

The 65AE7400 handles standard dynamic range sources well, too. In fact, the screen’s black levels are slightly better with SDR than they are with HDR, since the backlight isn’t having to work as hard. Even HD images turn out pretty nicely, with the 4K upscaling delivering decent detailing at the cost of relatively minimal unwanted processing side effects.

The slight (but not deal-breaking) tendency for dark areas to look more grey than black isn’t the only issue with 65AE7400’s pictures. Very occasionally, a dark scene can take on a slightly reddish undertone. Dark areas can look a little noisy sometimes, too, as if the screen’s baseline brightness is slightly too high.

Finally, the 65AE7400’s effective viewing angles before colour and contrast take a noticeable hit are very limited. You only have to be sat as little as 25 degrees away from directly opposite the TV to see colours desaturate and black levels deteriorate. This isn’t something to worry about, of course, if your room layout means that everyone watching the TV is likely to be sat pretty much directly opposite it.

Wrapping up the 65AE7400’s consistent ability to outperform – if only slightly – at its price point is its audio performance. The set can go surprisingly loud and the sound is pleasingly direct, too, feeling as if it’s coming forward into your room rather than hanging around vaguely somewhere behind the screen.

The main limitation with the 65AE7400’s sound is a lack of bass. Deep rumbles just don’t happen, denying big action-scene moments the gut-punching impact we all love to hear. On the other hand, I’d rather have a TV that accepts its low-frequency limitations – as the 65AE7400 does – than one that pushes things so hard that heavy bass lines cause its speakers to distort and crackle.

You want decent all-round performance on a budget While the 65AE7400 is no performance superstar, it’s slightly better in all departments than most sub-£650 65-inch rivals.

You have an awkward room layout If anyone in your home will routinely have to watch the 65AE7400 from much of an angle, the set’s limited realistic viewing angles will be a problem.

The 65AE7400 offers strong value for money. Its picture and sound quality are both slightly above par for its price, its VIDAA smart system is easy to use, and it’s both better built and better looking than many rivals. Plus, it’s only slightly more expensive than its own 55-inch sibling, making the step up in size almost irresistible.

However, its limited viewing angles will be a big problem for some living room layouts, and serious movie fans do need to accept that better contrast and much more brightness can be found elsewhere, if you can push your budget higher. In addition, serious gamers should note the (predictable) lack of support for 4K at 120Hz or VRR.

Hisense offers a 65A7100 for just £499, but this isn’t as well specified (in particular, it doesn’t support Dolby Vision) nor as attractively designed. A more tempting Hisense alternative would be the £699 65A7GQ, which adds Quantum Dots and Dolby Atmos sound to the mix.

One last option worth considering as an alternative is the £699 Samsung UE65AU7100. This only uses an edge LED lighting engine rather than the direct LED engine used in the 65AE7400, but it boasts some impressive image processing and Samsung’s more comprehensive smart engine. 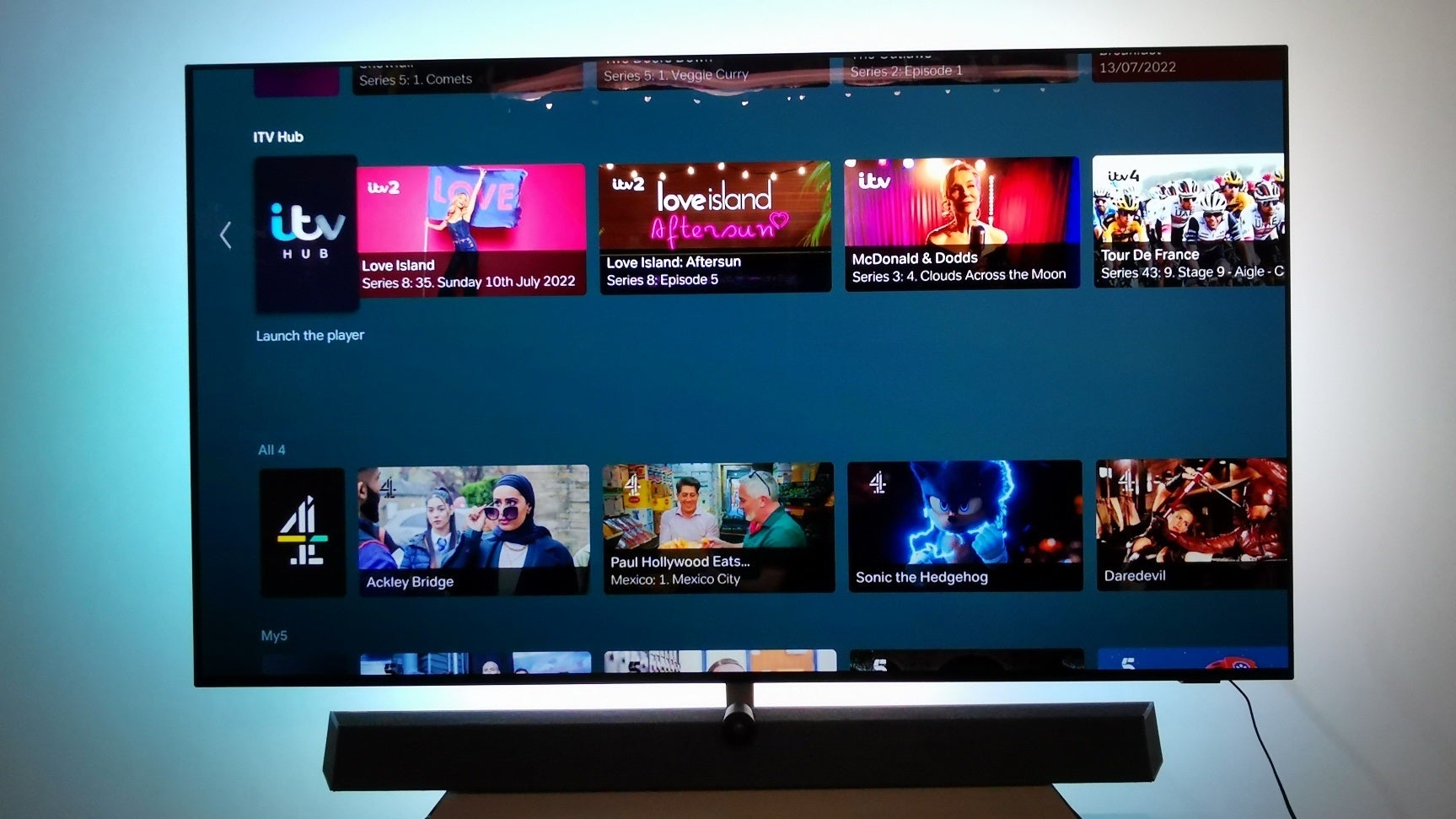 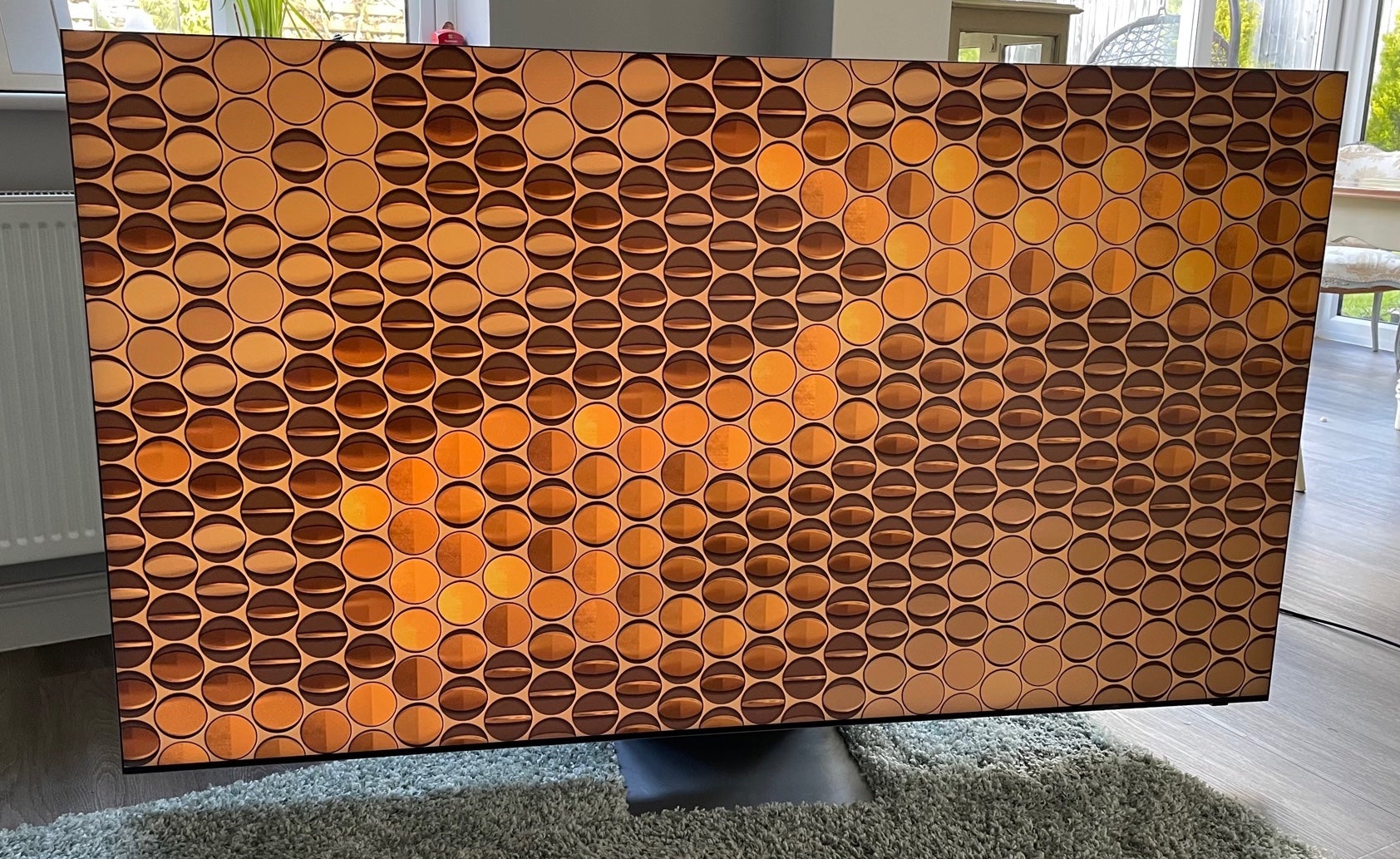 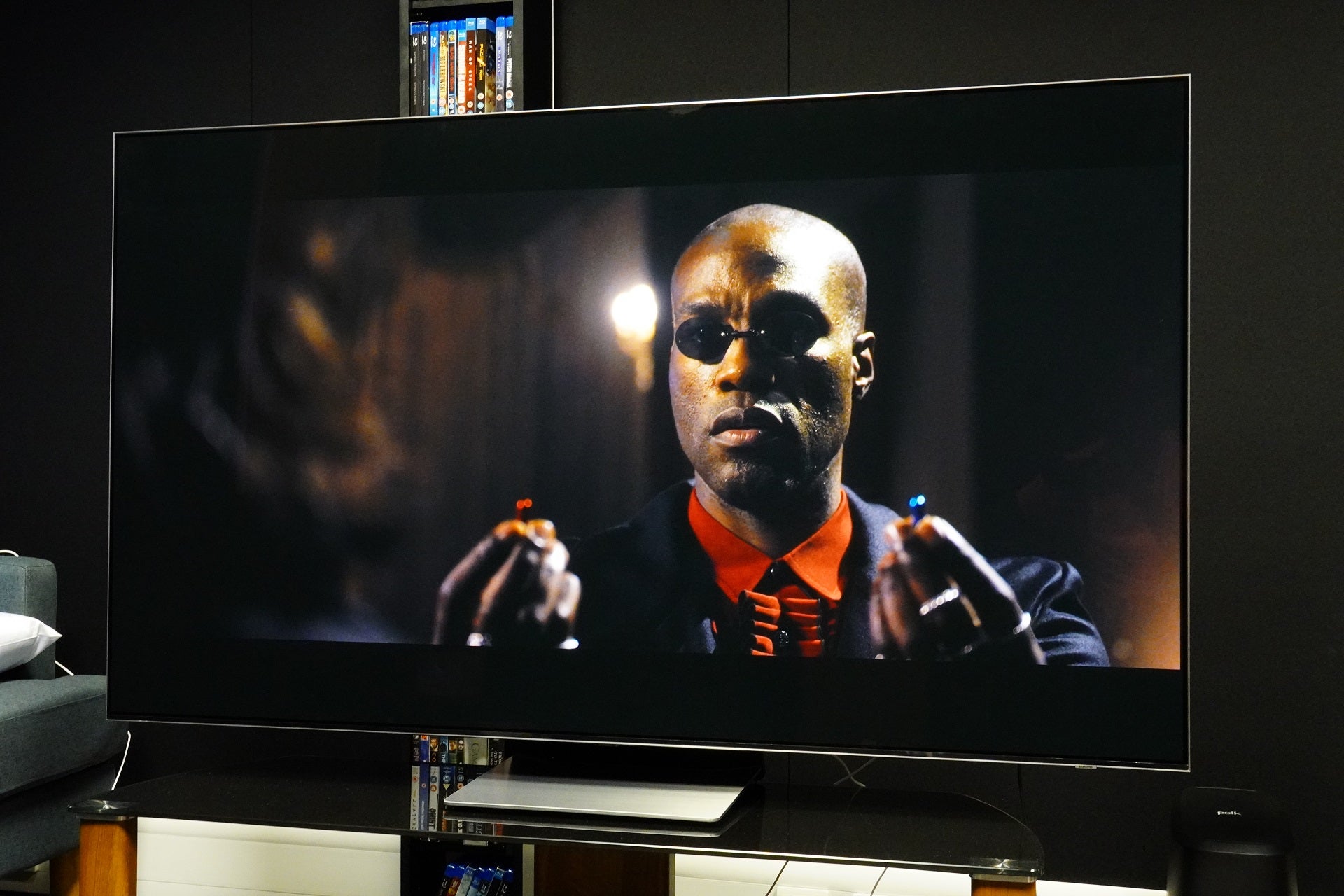 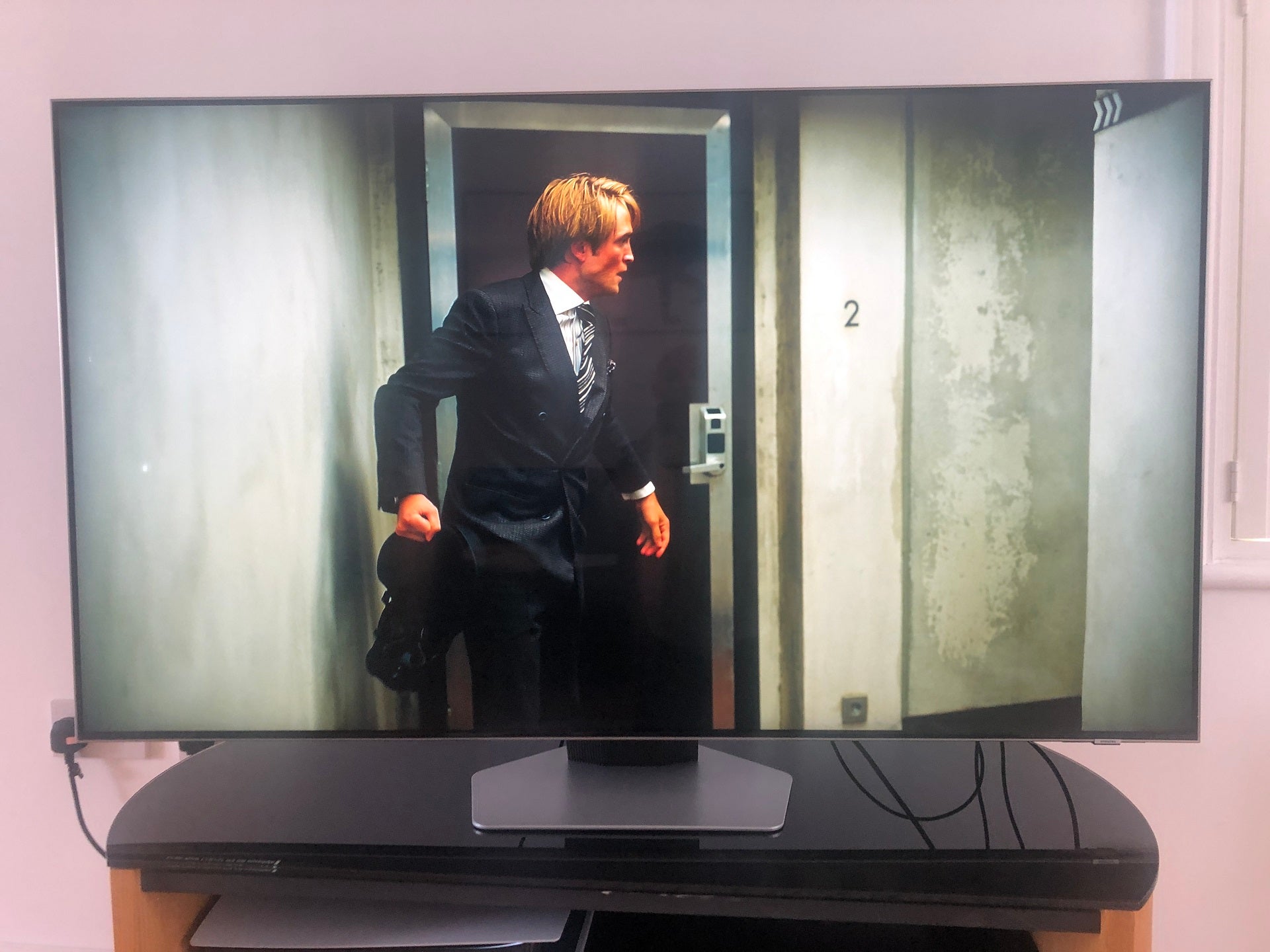 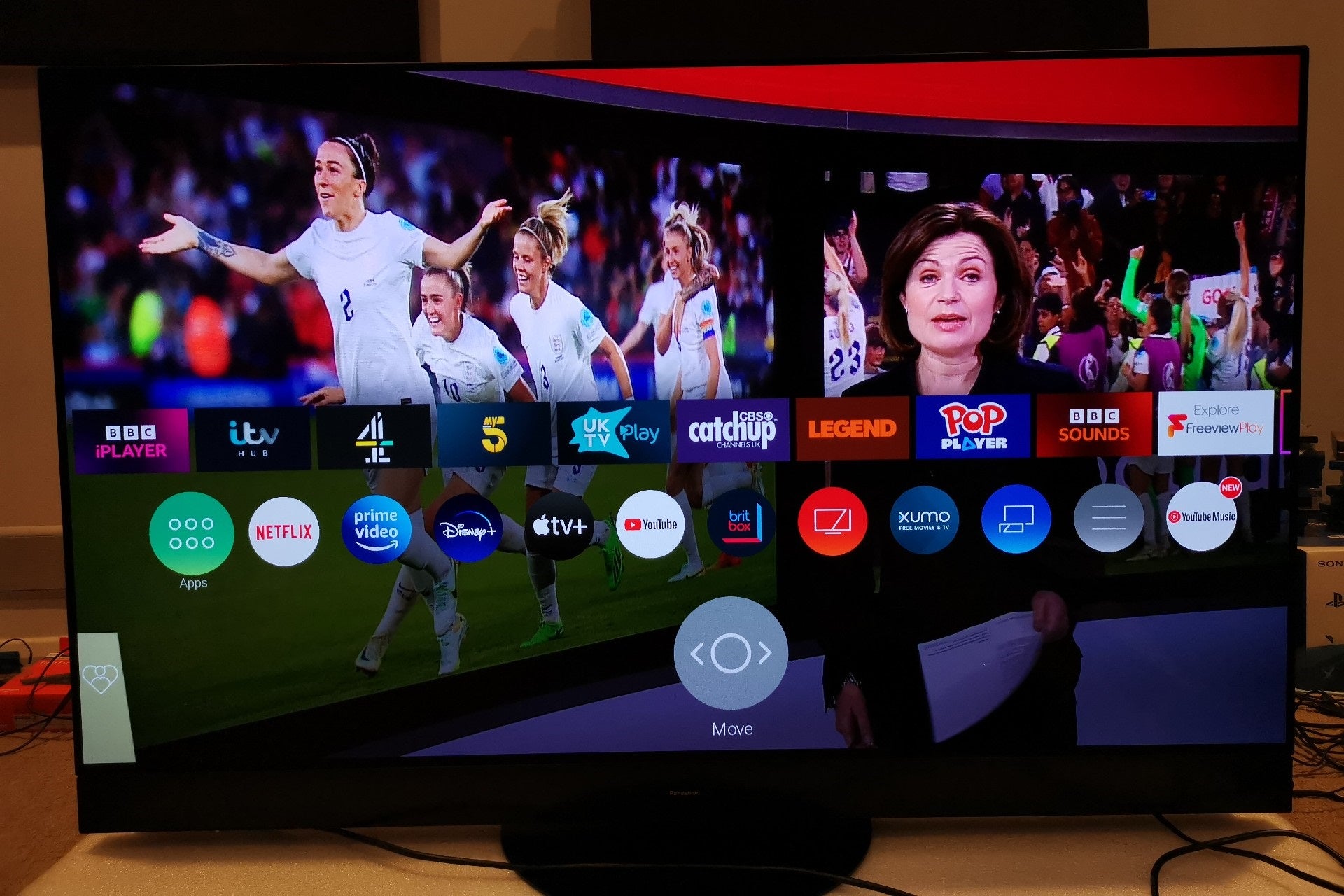 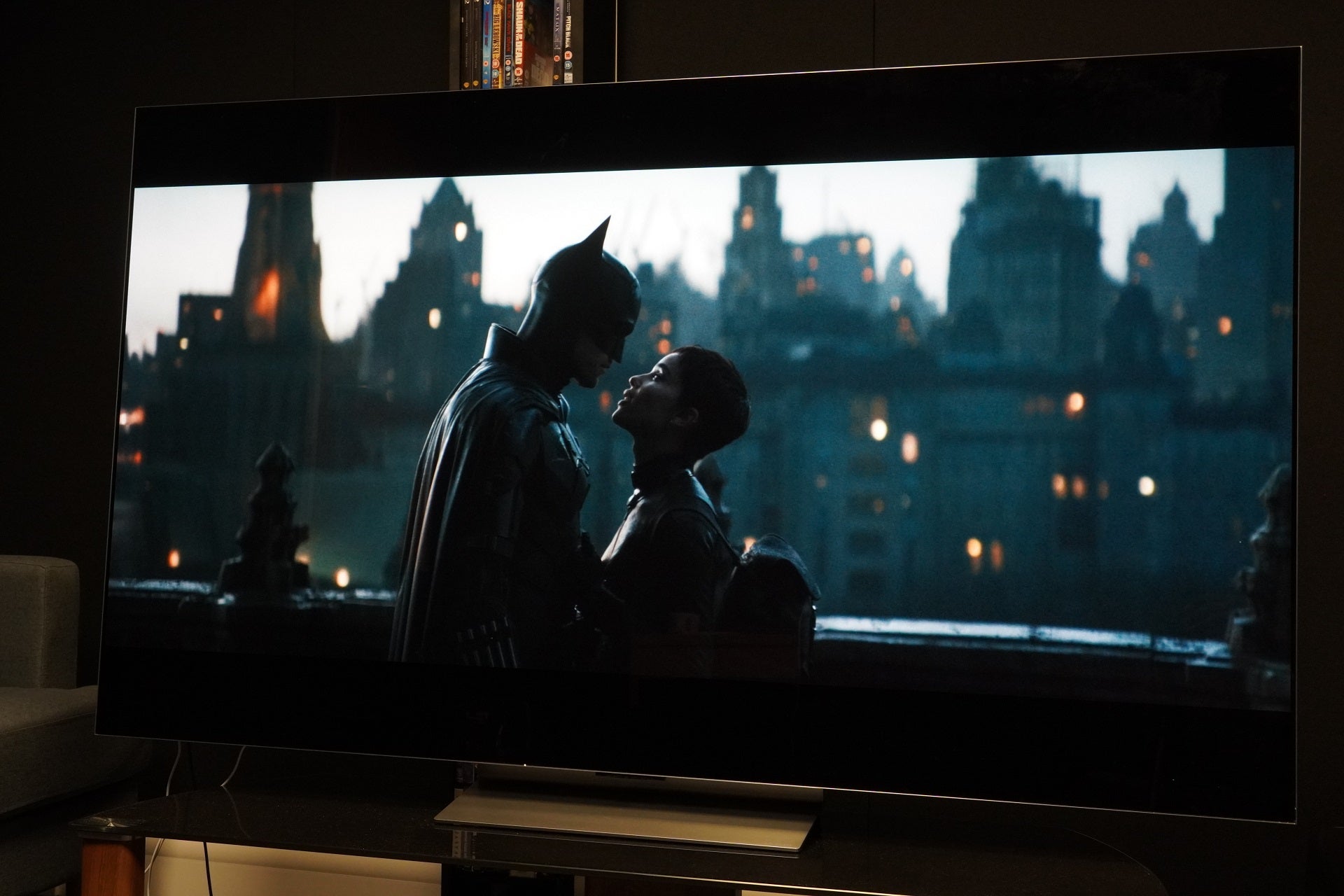 Yes, any Hisense TV with VIDAA 4.0 interface or better should have access to the Disney+ app.