Back in July of last year AMD wowed us all with the release of its HD 4870 graphics card. While it wasn’t outright faster than nVidia’s GTX 280, it was a huge improvement over AMD’s previous generation cards and was far more sensibly priced. Since then both AMD and nVidia have released refresh versions of these cards in the form of the HD 4890 and GTX 285, as well as dual chip versions, the HD 4870 X2 and GTX 295. These all pushed performance forward but, as always, it’s with a brand new chip that things get really exciting. 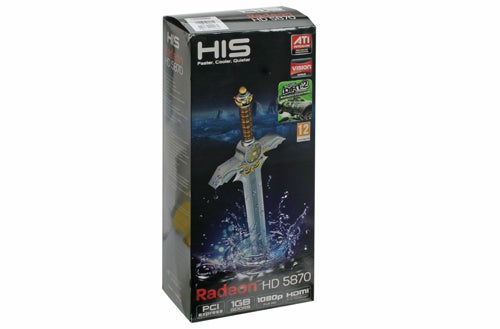 Today, then, we’re looking at the HIS HD 5870, a card based on AMD’s new RV870 GPU (codenamed Cyprus). This new chip is only the second graphics chip (after the much more modest one that powered the HD 4770) to be manufactured on a 40nm process. It’s also the first to support DirectX 11, the API that will be introduced with Windows 7 and will be powering the next generation of PC games.

This is particularly significant as it means AMD will be seeding developers with these cards to use for testing. With nVidia unlikely to have working DirectX 11 hardware of its own available for sometime this means AMD has a head start in getting games optimised to run on its hardware – a significant advantage nVidia had with the 8800 series when DirectX 10 was first appearing on the scene.


As with its recent previous generation cards, AMD hasn’t gone for an all out powerhouse of a new chip that will take performance to the next level. Instead it has aimed at creating a more modest chip that it can produce in large volumes and price more sensibly. Now, obviously £300 is still quite a lot of money for a graphics card but, compared to the likes of the GTX 280 that cost well over £400 when it launched, it’s reasonable.


To battle for the outright performance crown, AMD will mount two of these chips on a single board, in the same way that it did with the HD 4870 X2. So if you’re after the next level in performance and money’s no object then that’s the card to look out for in the future, along with whatever nVidia has to offer when it eventually arrives.

Now, we called the Cyprus chip modest but once you start looking at its stats you realise that word does it rather a disservice. Thanks to its 40nm manufacturing process, AMD has managed to pack 2.15billion transistors into a piece of silicon that’s just 334mm^2. In contrast, the previous top dog, the GT200b that powered the GTX285 had 1.4billion transistors packed into a 490mm^2 die.


Now, if you’re unfamiliar with the inner workings of AMD’s latest cards then you might like to read our review of the HD 4870 to catch up with the core features then come back and join us for this review. 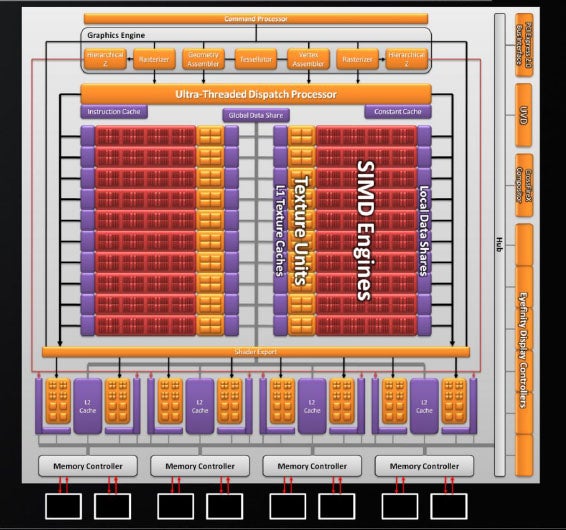 
What hasn’t changed is the amount of memory each card will use and the interface that the chip uses to talk to it, namely you’ll get 1GB of GDDR5 memory running at 4.8GHz communicating over a 256-bit interface making for a total bandwidth of 154.6GB/s.


There will also be an HD 4850 card based on the RV870 chip. However, this will have two of the SIMDs disabled and will run at lower clock speeds. This will result in it having 1,440 stream processors, 72 texture units, a core clock speed of 725MHz, and memory running at 4GHz. The number of ROPs, amount of memory, and the memory bus width remain the same though.

While there aren’t a huge number of feature changes in this card that are relevant to the scope of this review there are, well, a few. The first is the reintroduction of supersampling anti-aliasing (AA) support. This is a brute force alternative to the much more common place multi-sampling AA. It results in much better image quality but has a massive impact on performance, thus it having fallen out of favour.


The final under-the-skin change to the HD 5870 is support for Dolby TrueHD and DTS-HD Master Audio bit-streaming through the card’s DVI and HDMI video outputs. As with previous cards, the HD 5870 enables you to use a single cable from your computer to pass video and audio through an HDMI cable (using a DVI-to-HDMI adapter in the case of the DVI outputs) to your TV. However, whereas previous cards didn’t support all possible streams, with the addition of these formats, this card now supports all major digital audio streams used in DVDs and Blu-rays.

Looking more closely at the card itself, this is one of the longest graphics cards AMD has ever produced, coming in at 284mm. While this is bad enough in itself, what makes it worse is that the some of the extra length comes from the red vents on the back that don’t actually appear to do anything. We appreciate AMD’s attempts to make its card look a bit different but we’d rather it didn’t come at the expense of practicality.

Elsewhere the card looks pretty familiar with the usual CrossFire connectors on the top edge and radial fan based cooling solution. However, there are a couple of notable changes.

The first thing to note is the drop in the number of extra power connectors. Instead of the 1×8-pin and 1×6-pin required by the HD 4890 and HD 4870 X2, the HD 5870 needs ”just” 2×6-pin adapters. These means the card will be compatible with many more power supplies.


The other noticeable change is in the display output configuration. Instead of the familiar 2xDVI and 1xanalogue 9-pin DIN connectors, this card has four digital outputs; 2xDVI, 1x HDMI, and 1xDisplayPort. Before you get too excited, though, only three of these can be run at any one time and one of the three must be the DisplayPort. Still, when using 2xDVI and 1xDisplayPort you can at least run three thirty-inch monitors at once, which is sure to impress the ladies. There will also be a card that sport six DisplayPort connections for the ultimate in single-card, multi-monitor configurations.

As a result of the change in outputs, the exhaust of the card has had to be changed as well. With one DVI socket covering half the area that is normally given up for exhausting hot air, AMD has had to resort to venting some of the hot air out the top of the card, where it will flow back into your case. While we never like to have hot air being blown back into PC cases, considering how cool this card runs, it’s not half as much of a problem as we may have expected.


This coolness is due mostly to the change in manufacturing process and it also explains the change in power configuration mentioned above. The smaller transistors simply require less power to run at the same speed, thus they produce less heat. This explains the drop in maximum board power as compared to the HD 4870 but it’s down to some tweaking of the chip’s circuitry that AMD has also significantly reduced power when the card is idling. AMD quotes idle power consumption of just 27W, which is less than half that of previous gen cards, so you’re wasting less power when the card isn’t being used for anything too taxing.

We tested this card in the usual way, whereby we added it to our reference system, the details of which are below, then ran a series of gaming benchmarks. With the exception of Counter-Strike: Source (CSS) and Crysis, the results are recorded manually using FRAPs while we repeatedly play the same section of the game. For CSS and Crysis we use timedemos and framerate recording is automated. All results are repeated to check for consistancy and the average of the results is recorded. For Crysis, all ingame detail settings are set to High while all the other games are run at their highest possible graphical settings.


The HD 5870 puts in an impressive performance, comfortably beating its predecessor and generally matching the HD 4870 X2, though the latter consistently pulls away slightly at the highest resolutions and AA settings. The only real competition from nVidia is the GTX 295 where again the dual-chip card generally pulls away slightly at the highest resolutions. All told, though, the HD 5870 performs impressively, at least for its price. If you were looking to upgrade from your HD 4870 X2 or GTX 295 then the lack of outright performance may be something of a disapointment but, as mentioned earlier, AMD will no doubt follow this card up shortly with a dual-chip version for the ultimate in performance. Obvisouly we can’t actually test arguably the most important ”feature” of this card; DirectX 11 performance, because there aren’t any DirectX11 games yet so we’ll just have to wait and see on that front.


Next we tested power draw using a plug-in meter that measures the total system power. Just as AMD claimed, this card has seriously impressive power consumption figures, bettering both the GTX 285 and HD 4870 at idle and under load.

Looking at this card as a purchase, with prices for the GTX 285 and HD 4870 X2 hovering around the £300 mark still, and the GTX 295 demanding £350+, the HD 5870 certainly offers better value right now. However, as an upgrade, from any of these cards, well there’s just not enough there. DirectX 11 games are still a long way off and performance is not improved enough to bother. Moreover, with the HD 5850 costing £100 less than its bigger brother yet (at least theoretically) offering 80 per cent of the performance, that card looks set to be the bargain of the moment. We’ll give you the full lowdown on that card, though, when we review it shortly.


The AMD HD 5870 is an impressive graphics card, marrying top class performance (just) with low power consumption, support for upcoming DirectX 11 games, and a good price. But if you have a current generation high-end card, there’s not enough reason to upgrade.