Hopefully by now, you have read our coverage of the new Microsoft Windows XP Media Center Edition. If you got excited by the possibility of a computer that can handle media rich content in a new and improved way, then the Hi-Grade Xperian might be the kind of thing you’re after. The Xperian doesn’t come with XP Media Center Edition, but rather a set of custom applications.

In many ways it is similar to the Elonex eXentia, but it has a few tricks of its own.


The design of the Xperian is excellent and it would definitely not look out of place in your living room. From the front, all you see is the 17in TFT flat panel with a native resolution of 1,280 x 1,024 and the two stereo speakers. It would however have been better with a widescreen 16:9, as the current 4:3 display isn’t perfect for watching DVDs.


The colour scheme is unusual but attractive. The screen surround is a smoky brown colour, while the main unit is in dark silver. The display itself is covered in a protective plastic sheet, which makes it easy to keep free of finger prints and smudges. The system is also very compact which adds to its stylish looks. It’s a shame that Hi-Grade has managed to spoil the stylish looks of the Xperian with to many logos and stickers all over the front though. It would have looked better with a clean silver finish.


The Xperian is running a standard version of Windows XP Home which makes you wonder what is so special about it. Well, for starters it features both integrated TV-tuner and FM radio. This is nothing special in itself as a TV tuner can easily be added to any old PC. But this is where the Xperian starts to get interesting.


Switch off the Xperian, take out the supplied remote control and press the TV button and within 10 seconds you’re watching full screen TV. Press the radio button and you switch to a full screen radio tuning application, again press the CD/MP3 button and you have the choice between audio/MP3 CDs or to play MP3s from the hard drive. And finally there is a DVD button that of course takes you to the DVD playback software which plays DVDs in full screen. This is great as you don’t have to boot the Xperian in to Windows and it takes next to no time to switch between the different applications.


You can even use the Xperian as a PVR and record TV programs to the hard drive using useful features such as time shifting. This allows you to watch a programme from the beginning while it’s still being recorded. The remote control is fairly straightforward to use, although it has a lot of buttons which could confuse some users.


The video playback is first rate, even with fast moving images the Xperian produced a great image. The sound quality isn’t quite up to the same level as the screen, and it’s a little quiet when watching DVDs. Hi-Grade does however supply a set of Creative Labs I-trigue 3300 speakers to add some oomph to the sound. Unfortunately these particular Creative speaker don’t produce great sound, but they do look awesome and fit in with the Xperian image.


As far as PC specification goes, Hi-Grade hasn’t cut any corners. The core of the Xperian is a 2.66GHz Pentium 4 running at a 533MHz bus speed. The motherboard features the now slightly older Intel 845PE chipset but this is still very capable. 512MB of PC2700 DDR SDRAM accompanies the processor and motherboard. The integrated graphics card is based on an ATi Radeon 9000 chip with 64MB of memory. This might not be great for the latest games, but the Xperian isn’t really aimed at gamers.


The hard drive is a 120GB Seagate unit running at 7,200rpm. The single optical drive is a Panasonic combo DVD/CD-writer that is capable of writing to DVD-R media at two-speed, DVD-RW media at single-speed, DVD-RAM at single speed, CD-R media at 16-speed and finally CD-RW media at 10-speed. This is a laptop style drive that pops out of the right-hand side of the main unit. Set behind the optical drive is the TV and radio aerial connectors as well as a Video input connector that attaches to a splitter cable. The splitter adds S-Video and composite video input.


Around the back of the Xperian you’ll find a wide range of connectors comprising 3.5mm audio connectors for microphone, line in and line out, optical S/PDIF, two FireWire ports (one 4-pin and one 6-pin), modem, LAN and two USB 2.0 ports.


The onboard modem is a V.90 56k unit and the integrated network adapter is capable of 10/100Mbit. The audio ports can be reconfigured in software, as the onboard sound provides 5.1-channel support.


On the left had side of the display are a further two USB 2.0 ports, a single Type II PC Card slot and a memory card reader that accepts Smart Media, Secure Digital, Multi Media Card and Sony Memory Stick.


The accessories bundle consists of the aforementioned remote control, a wireless mouse (that comes with a USB attached charger cable) and a wireless keyboard. The keyboard isn’t great, resembling something found on a modern notebook. The profile is rather flat and the bottom row of keys is a little hard to use since they sit below the level of the keyboard frame. A nice touch however is that you can store the keyboard in front of the display on a small stand when it’s not used. Hi-Grade also includes a copy of Microsoft Works 7 and Panda Anti-Virus Titanium.


Looking at the benchmarks of the Xperian you might notice that it’s not the fastest machine around, but you have to ask yourself if that really matters?

I don’t think it does, power is not what this machine is about. This is a solution that allows you to have a stylish PC that does everything well, not a performance monster. That said, it’s not a slow machine by any means, but its weakest points is going to be its inability to play the latest games.


The Xperian is a great living room PC that has every feature you could want. There is however one little problem and that is the asking price of £1,598, which is a little on the steep side even for something like this. But if you’re after a stylish machine that you can keep in the lounge without feeling embarrassed this is definitely one to take a closer look at. 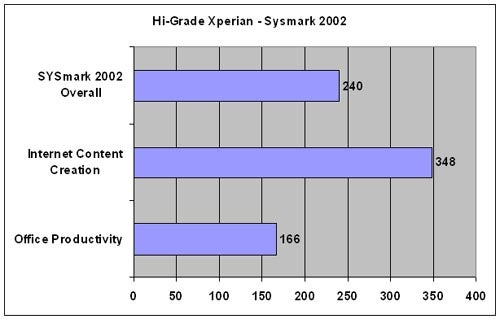 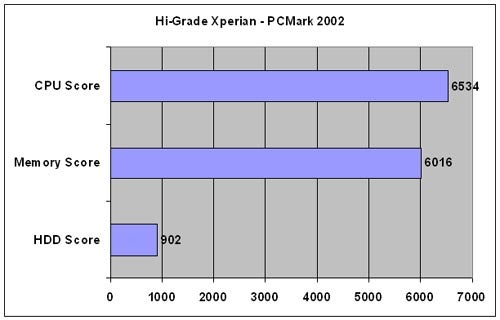