Well made and providing control over three power sockets and six USB ports, the Hey! Smart Power Bar is one of the most flexible smart strips available. Yet, hunt around and you can pick up identical-looking products offering the same features via a different app for far less, making its purchase difficult to justify. It's good, but just too expensive next to rivals.

Smart-home newcomer Hey! is pushing itself as a friendly, easy-to-use brand, offering a range of Wi-Fi-connected smart home products powered through its single app. The Hey! Smart Power Bar is a three-way power adapter and six-port USB hub, with each component available for individual control.

Decent built quality and the option of controlling multiple devices from one strip are welcome, but there are cheaper alternatives offering a greater number of features.

A chunky bit of plastic, the Hey! Smart Power Bar feels sturdily built, and looks much like any other extension strip. This model features three power sockets, which are spaced decently, so you shouldn’t encounter issues if plugging in multiple devices. 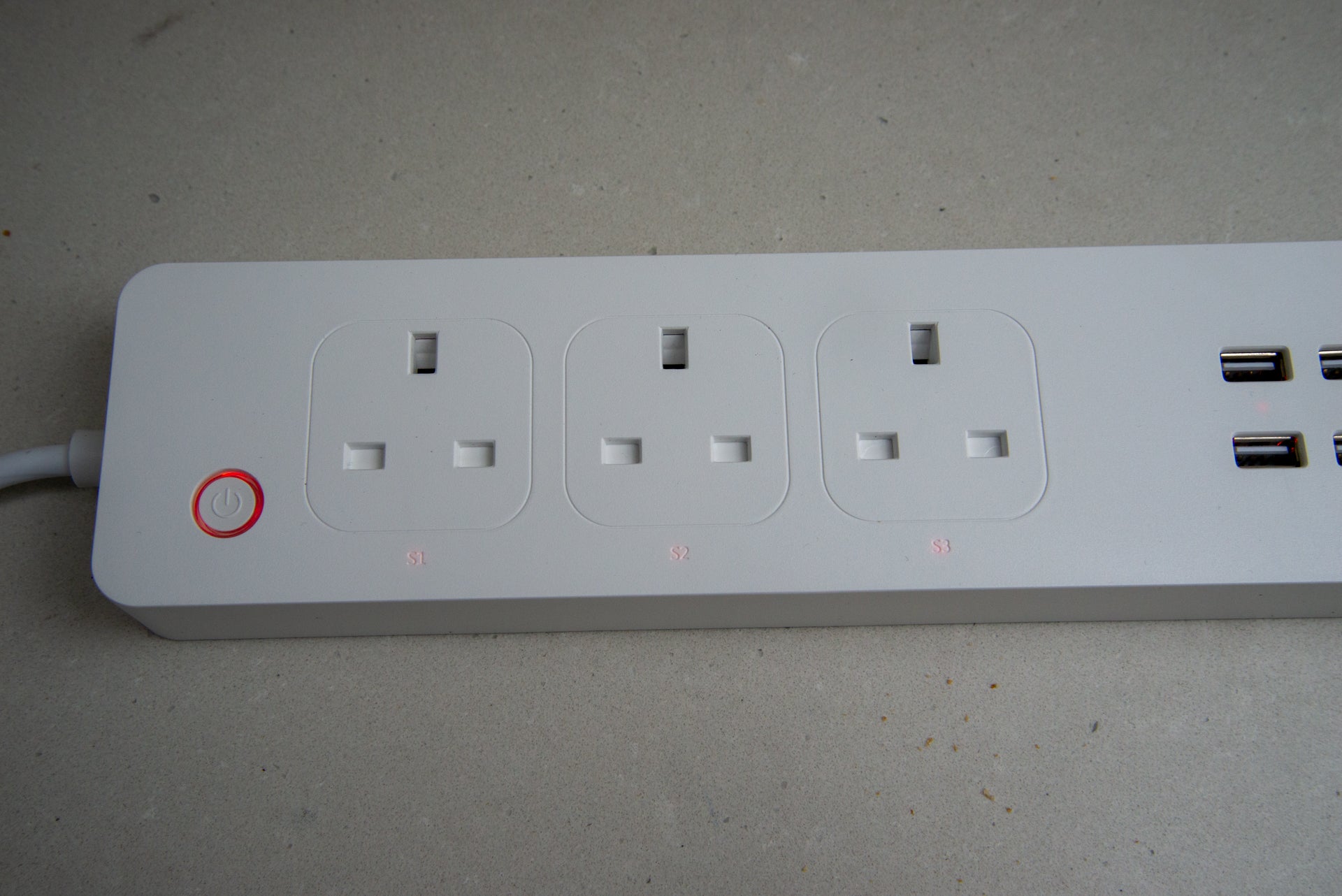 It also includes six USB ports at the end, providing the flexibility to control different types of devices and chargers. 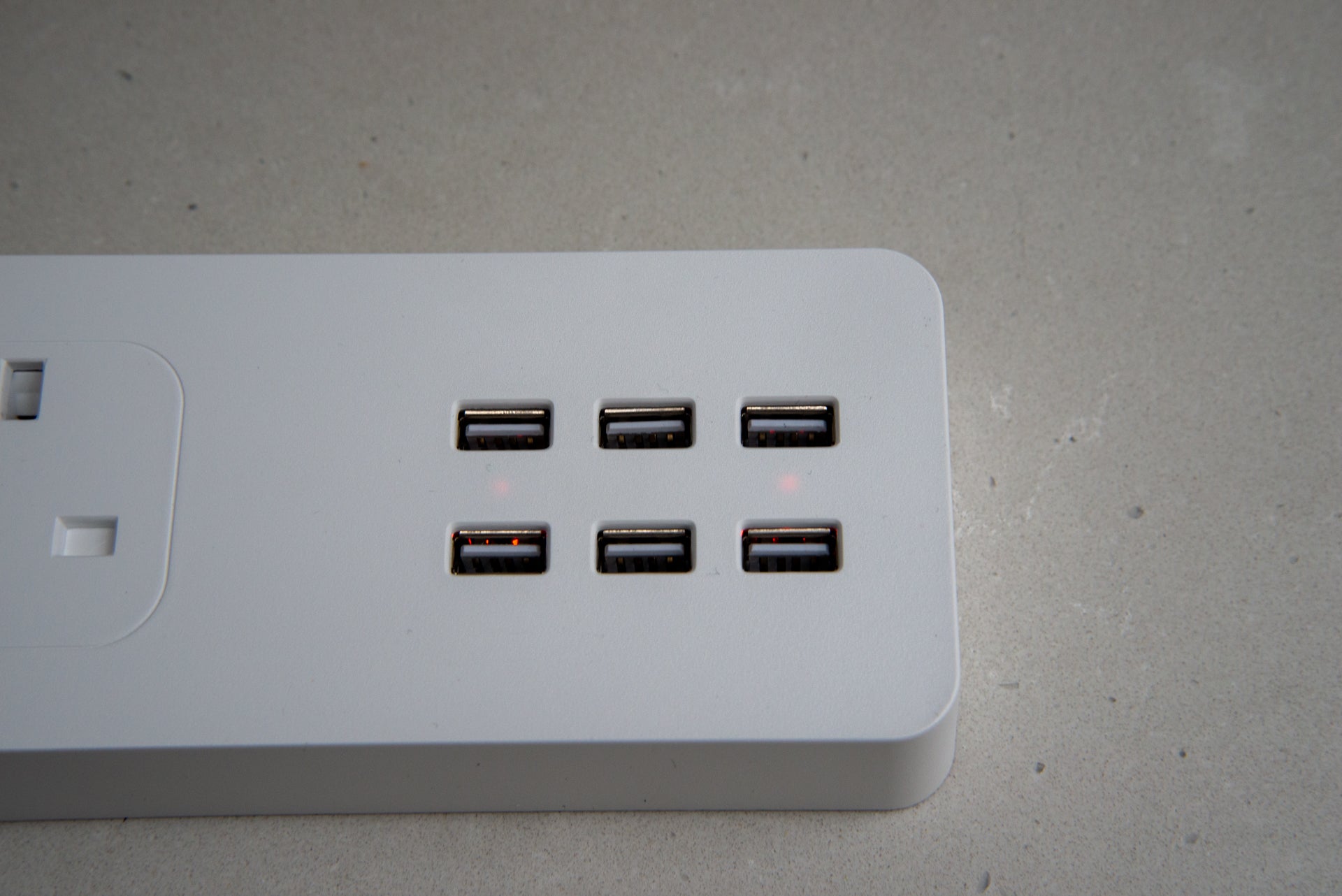 A single on/off button on the power strip toggles power to all the plugs and USB ports. While the ability to toggle power to the USB ports is neat, we’d have preferred individual manual controls, rather than the blanket all-on or all-off.

A status light sits beneath each switch, although the dim red glow can be difficult to make out in daylight. Note that there are no mounting points on this strip, so it will have remain flat on the ground, as opposed to affixing it to a wall. Hey! Smart Power Bar features – Good enough, but you can get similar products for less

To access the main controls you’ll need to download the Hey! app. This takes you through finding and installing your new power strip – although this requires that you reset it to put it into pairing mode. Note that the instructions in the app are incorrect: there’s no individual status light; rather the light ring around the main power button is the status light.

Once the Power Bar in pairing mode, you can hook it up to your 2.4GHz Wi-Fi, giving you app control.

The device appears in the app as the Hey! Smart Power Strip (not Power Bar, as per the product name). Tap this and you’ll see simple on/off controls for each switch (they’re clearly labelled on the physical device) and the USB ports (you can turn them all on or all off). You can rename the main power strip and, as of a recent update, each power switch, too. 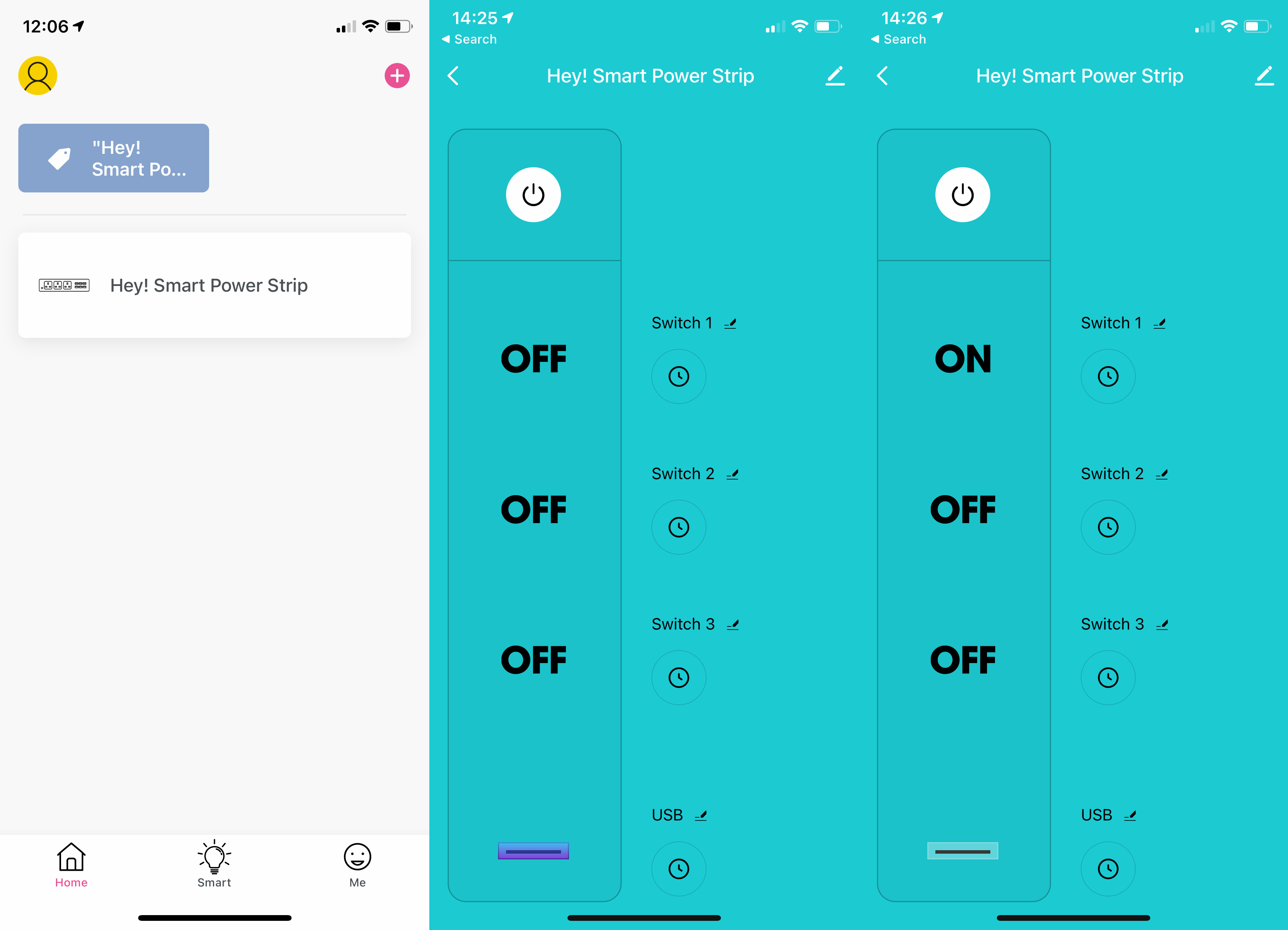 You can set schedules via the app, plus create rules to run multiple actions (say, turning on two switches) and automations based on location, the weather or another smart device in the Hey! family being controlled. In short, this is pretty much par for the course for smart plugs. 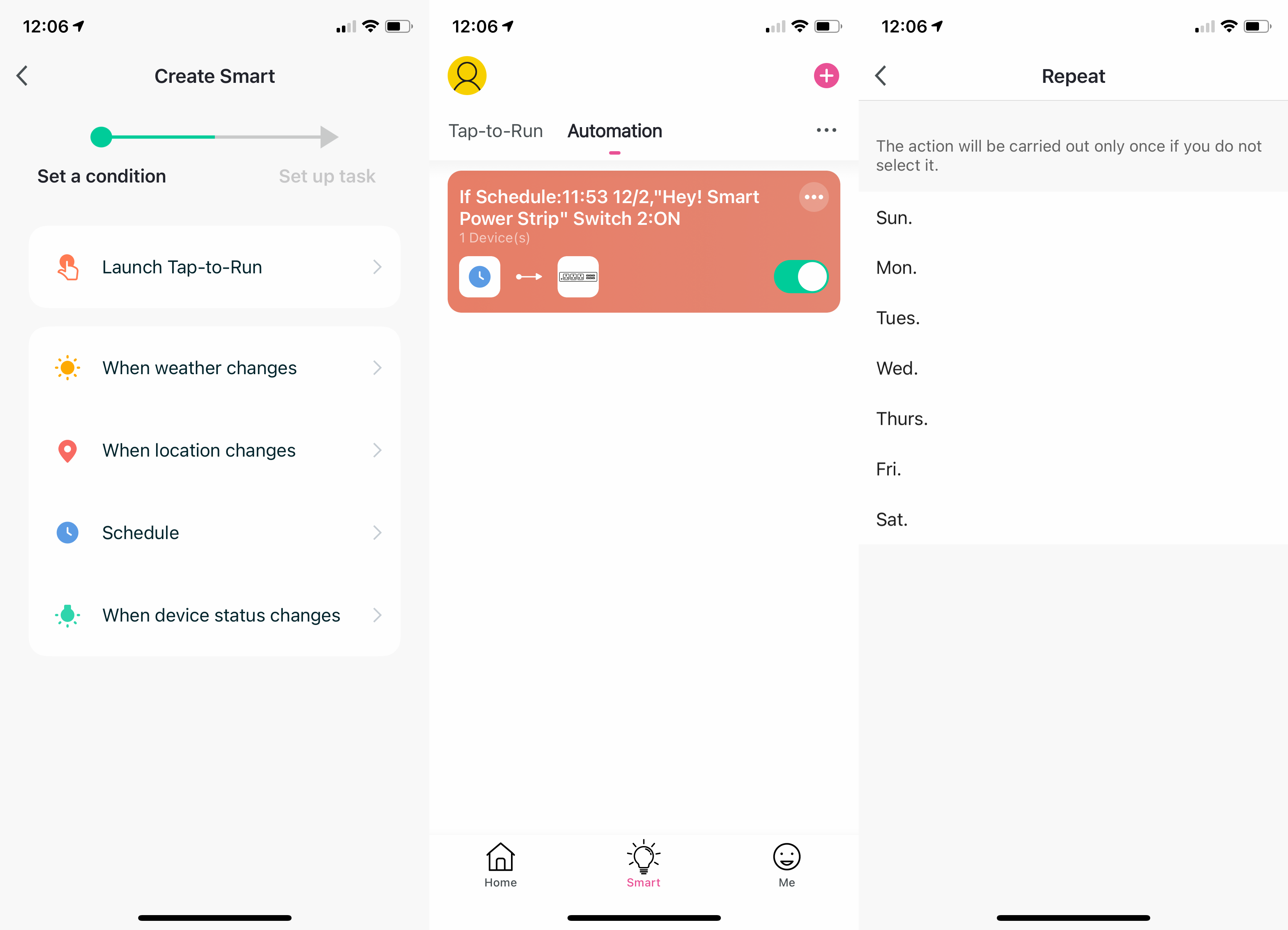 There are Amazon Alexa and Google Assistant skills, which let you control the devices with your voice. And, you can rename the switches in the respective apps to make them easier to identify. It appears from the app that there’s IFTTT compatibility, too, but tapping the option just popped up an error when I tried.

Doing a bit of digging for some help, I stumbled across the 3 Gang UK Smart WiFi Power Strip on eBuyer, which looks identical – although this one uses the Smart Life app. So, I downloaded the Smart Life app and managed to connect the Hey! Smart Power Bar to this app instead, where it also appeared as the Hey! Smart Power Strip. Tapping the power switch launched the same interface as the Hey! app, plus the same automation rules. 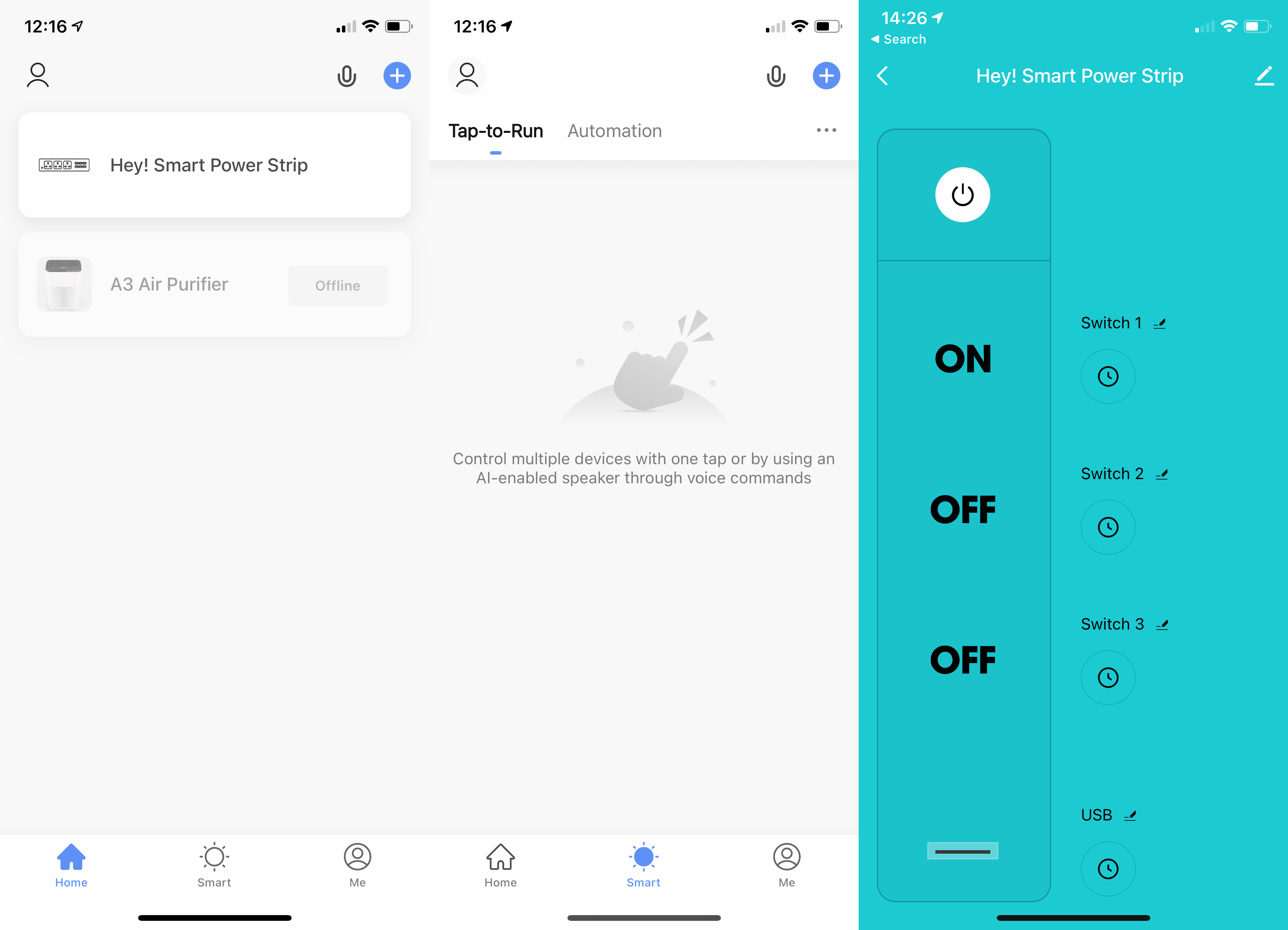 This app pointed me to the Smart Life IFTTT service. When you connect this, you can use your Power Bar in IFTTT applets, gaining a feature that isn’t directly accessible through Hey!’s app.

From screenshots, you can see that the alternative 3 Gang UK Smart WiFi Power Strip has a slightly different app interface when used through the Smart Life app – it’s a different colour and the schedule button is in a different place. Note, too, that the Smart Life app is a little more confusing, listing hundreds of devices; Hey! has restricted its app so that you can only add products in its lineup.

According to Hey!, it uses Tuya for its app, which is used by Smart Life, too. It appears as though using the Smart Life app pulls in the interface for the connected product, as the manufacturer wants it to appear.

Hunting around, we’ve discovered that there appear to be many products using the same design. Google the product number on the back of the Hey! Power Bar (Model: HLT-336), and you get this identical-looking product on AliExpress. 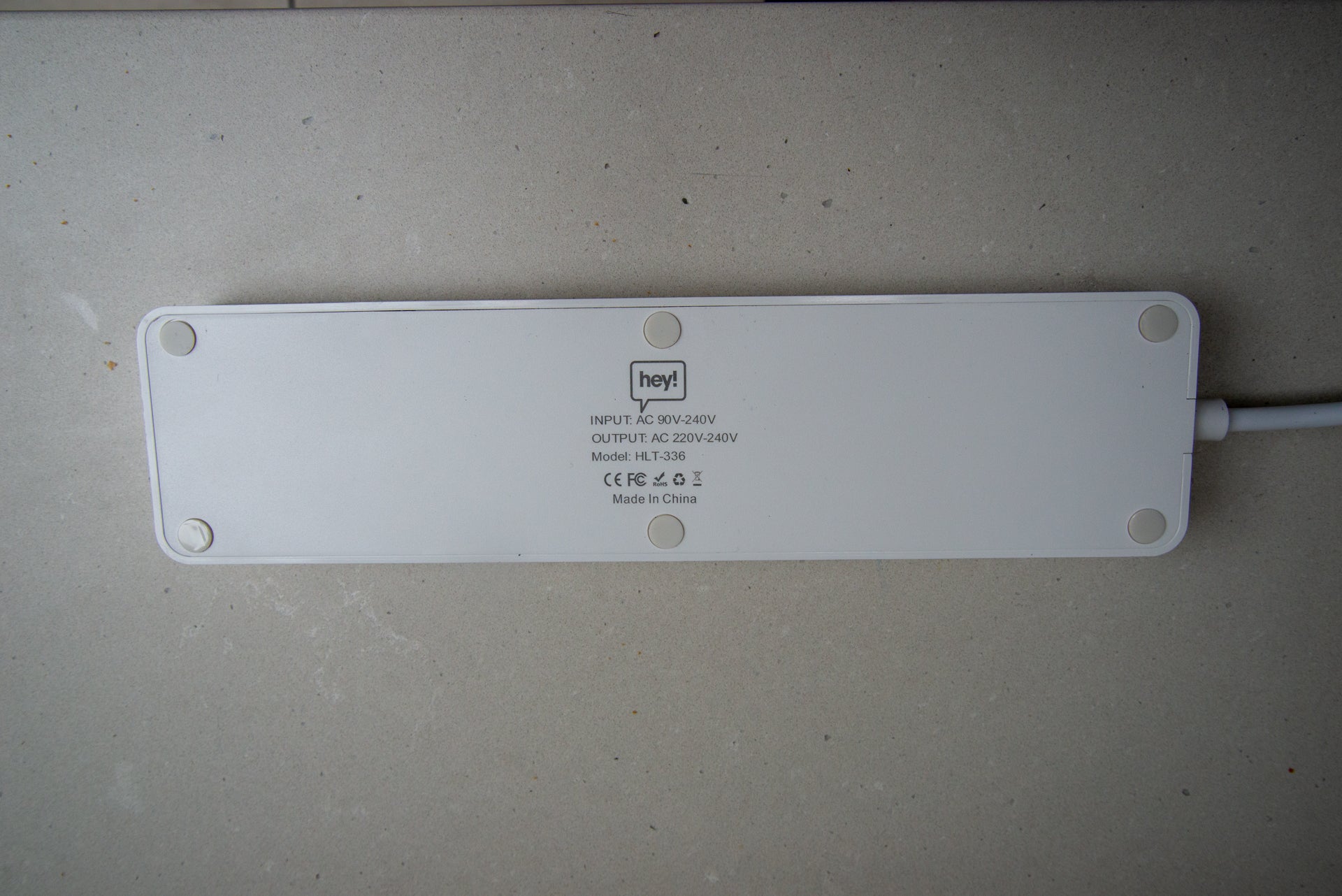 All the rival products are available at a cheaper price to the Hey! model, with the 3 Gang UK Smart WiFi Power Strip costing just £14.99. In effect, you’re paying more to get the cleaner app and different firmware.

Should you buy the Hey! Smart Power Bar?

Given that this product costs £40, and the alternative three-plug, six-USB port version is just £14.99, it’s hard to justify paying more. Sure, the Hey! app is a little less confusing when it comes to setting up the product, but we don’t believe it’s worth paying an extra £25 for. In fact, you actually get more – IFTTT support, for example – by ditching the Hey! app and using Smart Life instead.

Overall, if you want something a bit slicker, with individual physical buttons for power control and a wall-mounting option, the TP-Link Kasa KP303 Smart Wi-Fi Power Strip is a great choice. That model offers a better app and wider integration options, including SmartThings support.