A super-cheap colour smart bulb. It's bright, but colours are muted and lose accuracy when you dial down the intensity. The Hey! smartphone app is okay, but we recommend ditching it for the alternative Smart Life app instead, for wider compatibility with other products. A decent bulb for occasional use – but for larger installations, the Hey! system is outclassed by Philips Hue.

A colour-changing smart light bulb for just £10 is pretty amazing value. Fortunately, the Hey! Smart Bulb avoids some of the pitfalls of its cheaper rivals, presenting a bright bulb that’s great for ambient lighting, even if colour reproduction is some degree away from what the Hue system achieves.

If you’re after a cheap bulb for occasional use, you could do far worse than this model.

Hey! Smart Bulb design and installation – It comes with an adapter, but not all lights will sit how you want them to

Hey! sells the Smart Bulb as an E27 screw model only, although there’s an adapter in the box to allow you to connect it to a standard B22 fitting. For the price, this is a welcome inclusion, but the trade-off is that it may make the bulb sit uncomfortably proud in some light fittings. If you need a smart bulb to fit in a specific space, look elsewhere. Otherwise, the Hey! Smart Bulb looks much like a regular LED bulb, with a curved top.

You can also buy the Smart Spotlight (£10), Smart Light Strip (£30) and Smart Candle Bulb (£10). That’s a decent range, but Hue has a wider choice of fittings and bulb types available.

Installation is via the Hey! app, although it’s worth noting that this is actually a cut-down version of the Smart Life app, only allowing the option to add Hey! products. The same features are present in both, but opt for Smart Life and you’ll be able to add in products from other manufacturers. As a result, I’d opt for the latter.

Smart Life, and its underlying products and ecosystem, appear to be getting more popular, with many manufacturers taking generic products and rebranding them under one name. I saw this with the Hey! Smart Power Bar, which also worked with the Smart Life app, and you could buy a cheaper version of the product from a different manufacturer. This time around, although there are similar light bulbs available that are compatible with the Smart Life app, none are cheaper, so the Hey! product remains a good choice.

As mentioned, I recommend the Smart Life app, as it allows you to add products from other manufacturers and have them all play nicely together. To connect to your Wi-Fi, you have to put the bulb into pairing mode, which the apps (both Smart Life and Hey!) say requires to you turn on the bulb, then on-off-on-off-on. Quite how you turn on a light bulb that’s already “on” is beyond me.

In fact, the poor instructions took me a while to work out, and the following is what appeared to work best. Turn on the light for a good 10 seconds, then follow the on-off-on-off-on part; just make sure that for the “on” bits, you let the bulb get up to full brightness (a second or two) before turning it off. Once flashing, the app should find the bulb and you can join it to your home Wi-Fi network.

You get all of the regular manual control that you’d expect via the app. You can toggle the light on and off, set the brightness, adjust its colour temperature (2700K to 6500K), and adjust the colour (full RGB colour spectrum). 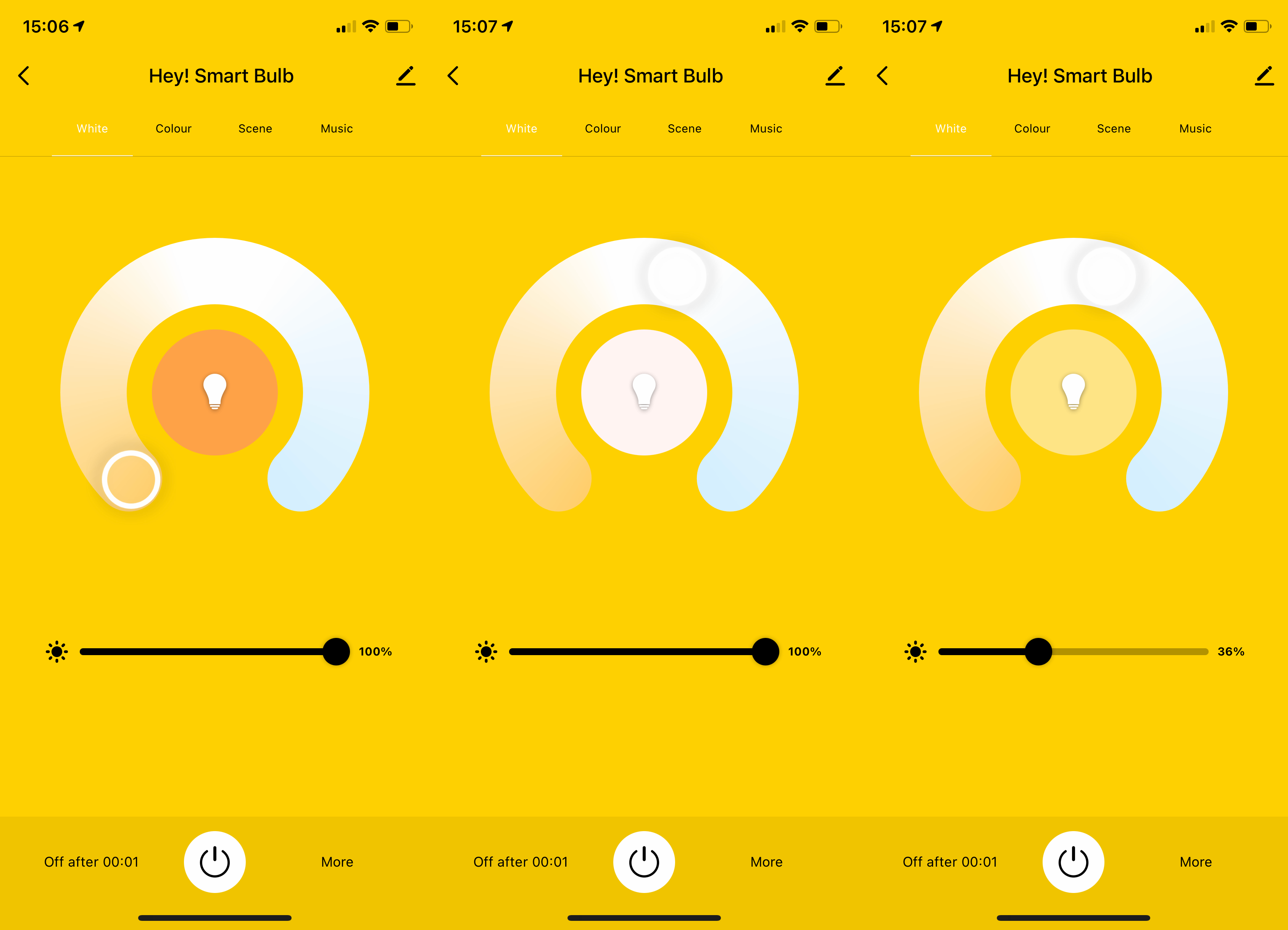 There are also scenes to choose from, with either set colours – say, for reading – or motion ones that cycle through a range of colours. You can edit the existing ones, but I couldn’t find a way to create new custom scenes, as is possible with Philips Hue.

Some smarter control options are available, too, including a timer to turn off the light, plus dedicated sleep and wake timers, which lower or raise the brightness over a set period. You can also set a schedule, which can be useful for giving the impression you’re at home when in fact you’re out.

I like the Rhythms feature, which lets you set the colour temperature of the bulb across four time periods. For example: having a colder, brighter light during the day, and a warmer, more relaxed light in the evening.

Rhythms doesn’t quite go as far as I’d like, however. You have to manually set the times to which each period applies, so you can’t match the bulb’s colour temperature to daylight temperature. To be fair, Philips Hue doesn’t include such a feature natively, but you can get it via the Apple HomeKit Ambient Lighting option. 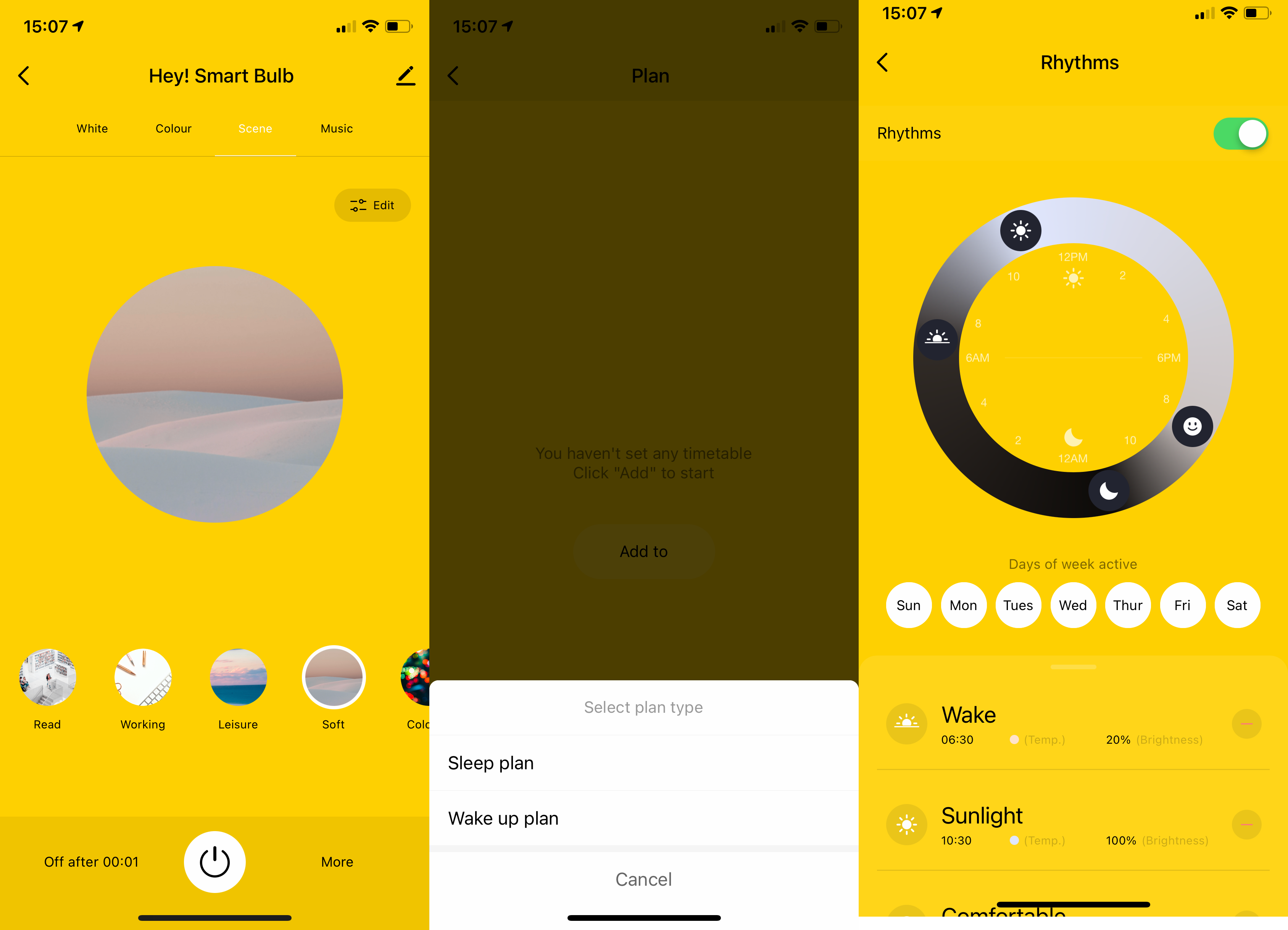 Via the Smart section, you can run routines and even set up IFTTT-style automations based on the other smart kit you have. For example, you can buy the Hey! Motion Sensor and have your light turn on automatically. If you decide to use the Smart Life app, then there’s a wider range of accessories out there.

The Hey! system is compatible with IFTTT, but it’s through the Smart Life Service. When you connect, IFTTT asks which product range you have, allowing you to pick only one. This, again, reinforces Smart Life as the better choice, as you’ll then have IFTTT compatibility with products from other manufacturers. Google Assistant and Amazon Alexa Skills are available for both Hey! and Smart Life, enabling voice control of the bulb.

There aren’t any Hey! smart light switches available right now, which is where Hue pulls ahead with its excellent range of switches and sensors. Given that there will be many times that it’s far easier to tap a light switch than use voice or an app, the Hue system can genuinely replace your existing lights, whereas the Hey! system isn’t quite there yet.

Of course, you can use your regular light switch to turn your Hey! Smart Bulb on or off – but just remember that if your light switch is turned off, there’s no power to the bulb, so you can’t use any of the smart features.

According to the writing on the side on the bulb, the Hey! Smart Bulb offers a maximum brightness of 800 lumens, which is around the same as the equivalent Hue White and Colour Ambience bulb.

Readings from both provide an idea of the areas of strength and weakness of a bulb. Certainly, I don’t have any complaints about maximum brightness. Measuring at the midpoint, the Hey! Smart Bulb output 11,700 lux, compared to 4578 lux for the Hue White and Colour Ambience. Similar differences were seen with cold white and warm white settings, too.

The big difference comes with the minimum light level. Where the Hey! Smart Bulb remains relatively bright at 1202 lux when set to the mid-white level, the Hue bulb drops down to 43.5 lux. The latter allows you to get a much dimmer, cosier light. Overall, the Hue bulbs tend to cast their brightness over a wider area, whereas the Hey! bulbs appear to give a more concentrated blast of light – although they are undeniably brighter. While you can easily light a room with a Hue bulb, the Hey! Smart Bulb gives you a lighter option. 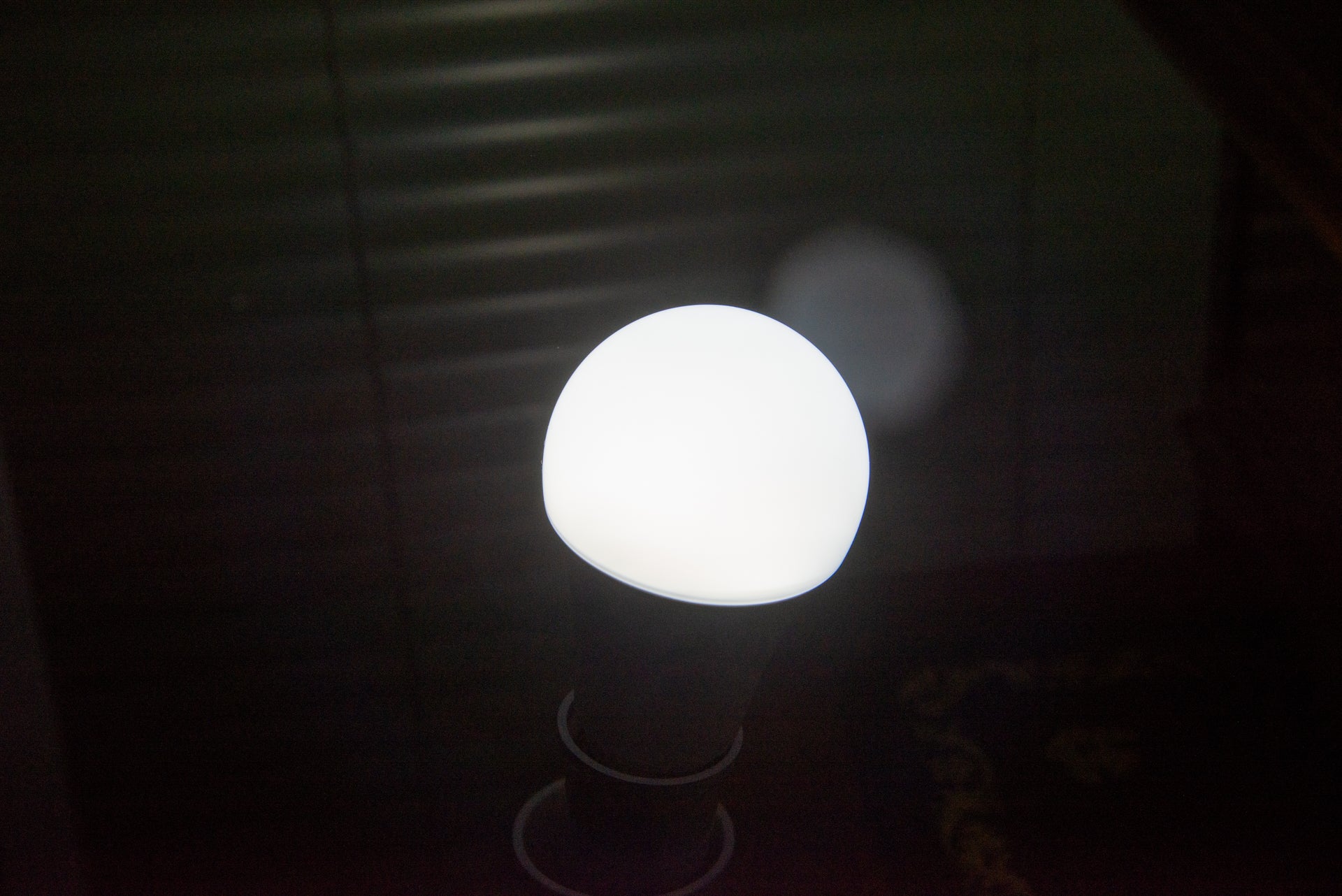 The real difference between the two is colour reproduction. Measuring the Hey! bulb on full brightness, I saw 282 lux when red, 358 lux when green and 345 lux on blue. The Hue bulb managed 1623 lux, 817 lux and 851 lux, respectively, producing far more intense colours. While you can use Hue bulbs to paint areas in different colours, the Hey! bulbs give more of an accent colour. In the sample shots below, you can see how much more the Hue bulb illuminates. Both shots were taken at the same time with the same camera settings. 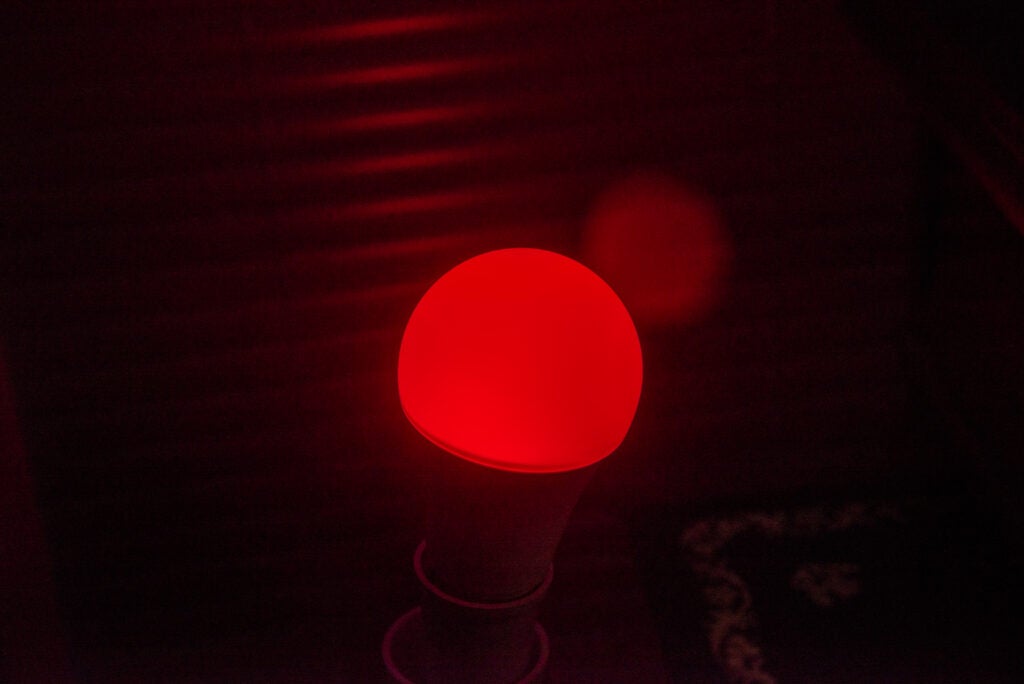 Colour reproduction is also much better with the Hue bulbs, with smoother transitions and more intense results. That’s particularly true if you dial down the intensity: the Hey! bulb rapidly moves to a washed-out pink colour. The Philips Hue bulbs are far more expensive, but there’s a reason: technically, they’re far superior, particularly when it comes to colour.

Should I buy the Hey! Smart Bulb?

If you want a smart lighting system to replace your existing bulbs, then Philips’ Hue range is far better. Offering better support with every major system, including Apple HomeKit, it also presents a wider choice of bulbs and fittings. In addition, you can buy a whole range of accessories for controlling the lighting as well. It remains the best smart lighting system by far.

Still, for just £10, the Hey! Smart Bulb isn’t a bad product. Even if its colour options aren’t that powerful, it’s a bright temperature-controllable bulb. If you’re looking for a cheap smart bulb and don’t need the full bells and whistles that Hue provides, this will do the job.