Hewlett Packard has a very longstanding relationship with Microsoft where its Windows Mobile software is concerned. The company was in at the start when Windows Mobile was first announced back in 2000.


When Hewlett Packard and arch-rival Compaq merged, HP took on Compaq’s iPAQ name, abandoning its own Jornada naming. As time went on HP integrated SIM support into its devices, but the company always stuck with the Pocket PC format with its large touch sensitive screen. At last Hewlett Packard has decided it is time to launch a smartphone and the result is the Hewlett Packard iPAQ 514 Voice Messenger.


I was just about the first journalist in the UK to get my hands on one of these to test and as I write this review I’ve had it for less than a week. There are still one or two tweaks to be done to the ROM before this smartphone goes on sale; it isn’t even up at Hewlett Packard’s website yet and no operators have announced that they are taking it on. However, that doesn’t mean to say operators won’t announce it, and Hewlett Packard tells me that it will be available SIM free in May for less than £200.

I have been very clearly briefed by Hewlett Packard that the iPAQ 514 Voice Messenger is a smartphone primarily for business users, and not a phone aimed at those who like to have the very latest features at their fingertips. Yes it runs Windows Mobile 6, which makes it something of a rarity at the moment and in this respect it is ‘state of the art’. But there are features which some consumers will turn their nose up at.


The most notable of these is probably the camera whose 1.3 megapixel capability is definitely way below what the average consumer would expect. Hewlett-Packard insists it is perfectly adequate for its main market of business users, and the choice is probably one of the factors that helps keep the device costs down.

Another of these factors is the display. It measures just two diagonal inches and displays just 176 x 220 pixels. If you’re accustomed to a phone with a larger screen it does take a bit of getting used to but for those who haven’t had the big-screen experience it will probably be perfectly fine.

On the other hand Hewlett-Packard has included Wi-Fi as well as Bluetooth. Wi-Fi opens up the potential for hopping on to the office network and also for using voice over IP including IP-PBX systems within the office. There is even an Internet Calling option you can configure and access from the Windows Mobile Today Screen.


This phone has been designed to look pretty unobtrusive and be easy to use. Its overall dimensions are not far off those of other Windows Mobile Smartphones. It is 107mm tall, 48.6 mm wide and 16.3 mm thick and weighs 102g. The black and grey livery has a couple of silver flourishes for buttons while the white colouring for the number pad and the white key backlight is understated.


It is important that it should be quite easy for most people to use the number pad and various keys. The navigation button is particularly large, and most of the keys are bevelled to help make finding them easy. The ones that aren’t – the Select, Call and End buttons are silver and slightly raised from their surroundings. None of these are hugely significant features on their own but taken together they show that a fair amount of thought has gone into trying to ensure ease of use. 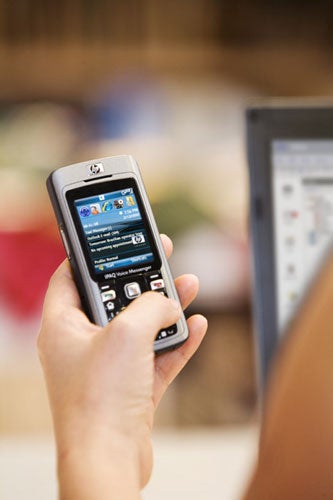 There are relatively few buttons on the edges. Bottom right is a button for the built-in Voice Commander software, which has a range of preconfigured commands allowing you to initiate calls, compose messages, make a voice recording, and even ask the phone “what time is it?” Ask that last question and a computerised voice gives you the answer. It’ll also read out email and SMS messages.


On the right edge is a volume rocker and connector for the provided stereo headset. The company bundles a stereo in-ear headset, which is reasonably good but I am sure there will be some, even among professional users, who will want to use their own earphones. Unfortunately, Hewlett Packard has made this quite difficult by choosing a 2.5mm jack into the handset. It is possible to use an adapter to 3.5mm but with the jack on the left side of the handset it will make the iPAQ 514 Voice Messenger sit awkwardly in the pocket.

On the Today screen the right softmenu buttons is labelled ‘Shortcuts’ and when selected gives you access to nine shortcuts mapped onto the number keys. You can configure these to point to anything you want: programmes, Web favourites, files stored on the machine or tasks such as listing the running programs or setting an alarm.


Just as potentially useful is the VoiceReply application. If an email has come into the phone and you need to compose a detailed response but don’t have the time or the patience to use the number pad, you can record a response instead. It is saved as a WAV file, and automatically attached to an email reply. The encoding is such that a 30 second message produces a 60k file. Simple, but potentially extremely useful.


This is a Quad-band handset with GPRS and EDGE support. I would have liked to have seen 3G integrated, but maybe that will come in the next generation. Hewlett Packard clearly thinks many users will have this phone’s contacts and calendar updated over the air, and probably in a further cost cutting measure, has opted for USB 1.1 for its wired PC connection. 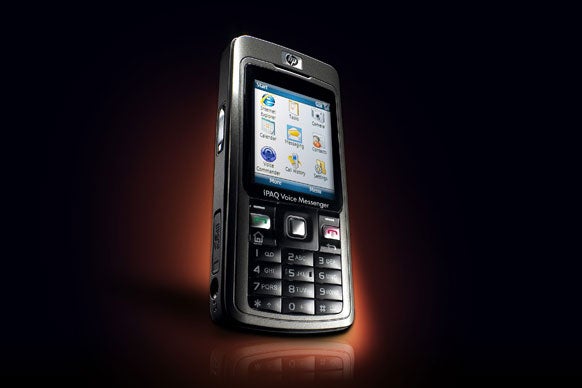 There is 64MB of SDRAM built in and 128MB of ROM. Straight out of the box my review sample reported that it had 48MB of free storage. This might not be quite what you see if you get hold of one of these phones. That ROM tweaking might consume a little more space and network operators will also consume some memory. You can add more with MicroSD cards and the slot is on the left side of the casing protected by a hinged rubber cover.


Hewlett Packard has chosen a Texas Instruments OMAP 850 processor running at 200MHz. The choice helps prolong battery life, which is an area in which this phone performed really well.


I asked it to play music without stopping from a MicroSD card and to keep the screen on all the time. I got eight and a half hours of music in total but worryingly there were no low battery warnings.


Although not aimed primarily at consumers it may well be that the price and the strong reputation of Hewlett Packard mean the iPAQ 514 Voice Messenger enjoys some success with this market. Certainly HP has shown with its first Windows Mobile Smartphone that it knows how to construct an easy to use device with some very handy features.