Rightly or wrongly, there’s a few select words developers across the globe utter to games journalists when they meet them at some event or other that will almost certainly cause the latter to roll their eyes and immediately shut down their brain: “So, we’ve been working on this match three game…”

If Bejeweled wasn’t a big enough IP – and, by the way, you can actually find Bejeweled arcade cabinets across the world now – Candy Crush has taken the humble match three and turned it into the equivalent of a Hollywood blockbuster. King’s franchise might be as celebrated by casual gamers as it is maligned by the rest, but there’s one thing everybody knows it is: a real money earner. It’s little wonder, then, that developers are keen to mimic its success.

No one, however, could accuse Hero Emblems of being either a Bejeweled or Candy Crush clone, though what it looks to do – merging a match three puzzler with a fairly light take on a turn-based RPG – is by no means unfamiliar. Nevertheless, the approach gives the game a tactical element tied to a physical manifestation, making you pause and think about the match ups you forge rather than simply ploughing on. 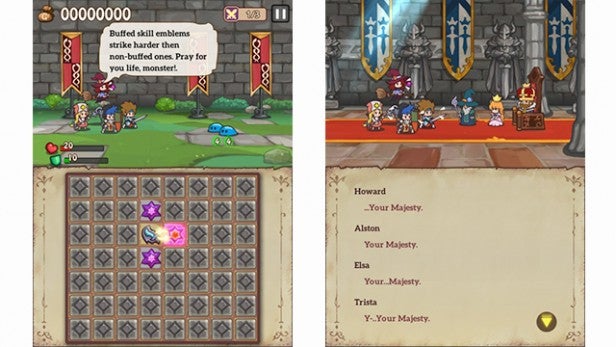 Hero Emblems isn’t going to win any awards for originality when it comes to its plot and premise, however. In charge of the kingdom’s imperial guard, you set out beyond the castle walls to defend the empire when a great darkness invades and – would you believe it – snatches the beautiful princess right before your eyes. You then spend your time roaming your realm and taking on batches of baddies whenever they cross your path.

Said battles are tied to a 7×8 match three grid at the bottom of the screen, with matching the corresponding icons triggering everything from a physical attack or burst of magic to upping your shields and restoring your HP. As with every match three since the dawn of time, matching four or more in a row unlocks a whole host of bonuses, and defeating enemies quickly becomes a case of triggering said special moves and combos rather than simply looking to match up the most obvious line of three. 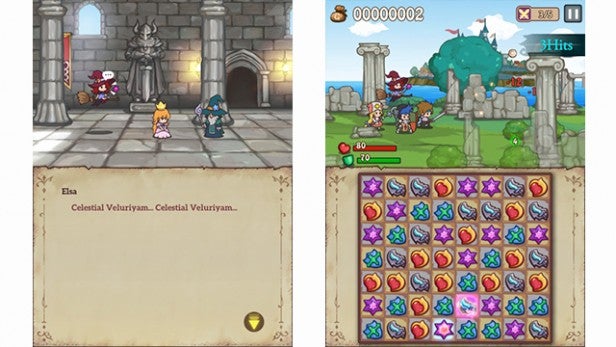 While battles can actually happen anywhere as you move around the map, sustained contests are pinned to specific locations, and it’s here where Hero Emblems ups the ante and really puts you to the test, early on. To progress against a succession of monsters, you need to do two things: firstly, look for as many combos or lines or four or five as you possibly can. If you stick to lines of three in these turn-based encounters, you’ll very soon find you’re eradicated within just a few attacks. The second tip is to make sure you visit one of the game’s marketplaces and buy as many items as you can, using the cash you earn in play to pick up health restores or special moves.

While random encounters in play are fairly easy to win, the main battles are virtually impossible without using an aid or two, something which arguably should be better signposted.

What’s more, while tactics have a major role to play (there’s little point, for instance, in lining up three icons to boost your health or shields if they’re already at top whack), many of the battles feel a little too random. You’re given multiple attacks in between each counter-attack by your foe, handily noted by a decreasing number below their feet. Knowing when you have time to defend yourself, then, and when you should go on the attack is key, though all too often success comes from random chains of icons clearing themselves without any input from you rather than any kind of planning on your part. 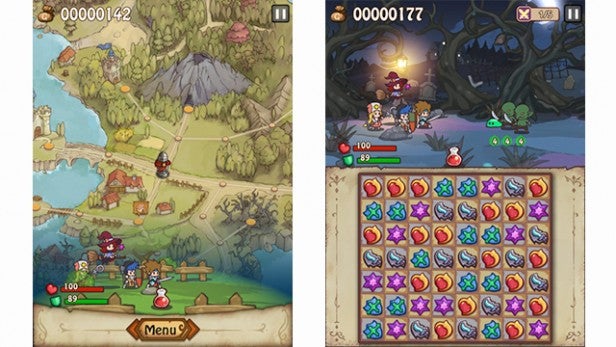 That’s great if it happens when you sorely need it to, but can mean you’re left high and dry if, for whatever reason, those magic combos don’t fall into place. For a game that puts an onus on strategy, for much of success to come down to chance feels a little out of place.

Some amusing translation issues aside, however, Hero Emblems is a more than competent match three battler that’s bolstered by some charming animations and a not too taxing plot. It’s different enough to stand out from the masses of match threes on the App Store, but familiar enough to be instantly playable. Original it most certainly isn’t, but play arguably serves up reason enough to save that princess, just one more time.

Verdict
A more than adequate match three battler, Hero Emblems doesn’t break down any walls when it comes to its plot – save the princess from darkness – and its play is arguably too random for the strategists out there, but its combination of match three puzzles with turn-based battles delivered via some awesome animation proves to be a potent pairing.